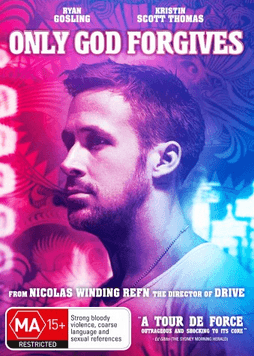 Imagine the confines of a boxing ring. You are the onlooker, waiting to be called upon to enter the arena. Only God Forgives is a film that requires viewers to be patient; in order to accept what is happening as believable and engaging enough to continue watching. As the winner of the Grand Prize at Sydney Film Festival, should audiences expect Nicolas Winding Refn’s crime thriller, Only God Forgives to be more impressive or dreadful?

In an underground Thai Boxing Club, the audience is introduced to the preliminary fight of two young boys as a cover up for criminals dealing drugs. After a successful boxing round the brothers, Billy (Tom Burke) and Julian (Ryan Gosling) generously pay their contender. To take pleasure in his smuggled goods, Billy becomes the devil of the night when he proposes ฿15,000 to fuck the young daughter of the manager running a whorehouse. When refused, Billy retaliates in a violent outburst that leads him to settle for a 16yr old girl on the street, with whom he brutally rapes and murders. 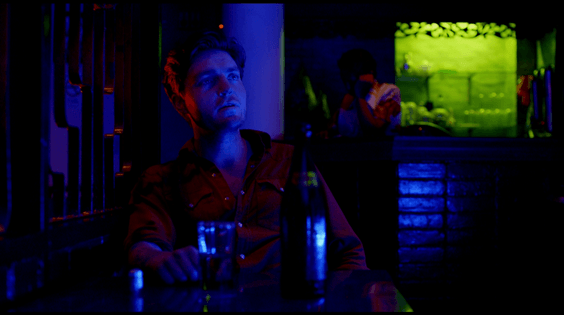 When the lead police officer, Chang (Vithaya Pansringarm) arrives at the bloody crime scene, he leaves the father alone in the bedroom to do something about the situation, with the guilty man and what remains of his teenage daughter. Chang and the police force take the father Choi Yan Lee (Kowit Wattanakul), to a deserted dirt track underneath the highway and determine the punishment for the man, who should have protected his daughter from the dangers of prostitution.

With the arrival of the crime lord mother, Crystal (Kristin Scott Thomas), Julian is assigned to hunt down the man who killed Billy. However, when Julian discovers the identity of Choi, who is now one arm shorter than before, he is conflicted to take revenge after learning that a police officer was involved. This scene is characterised by an eerie percussion, rather than dialogue, to accentuate the apprehensiveness of Julian to terminate the greater threat of Chang. 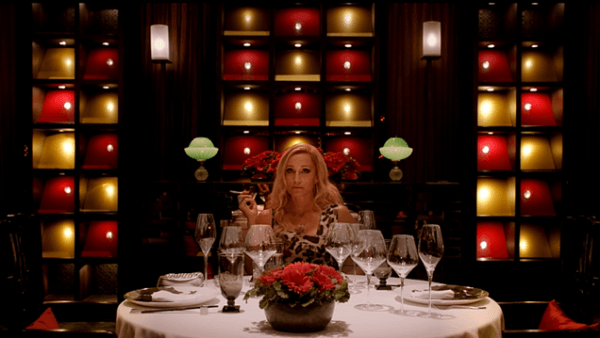 The story progression follows slow-paced action and movement between expressionless characters and prolonged silences. Crystal is desperate to take vengeance for the death of her first born son and persuades her comrades to finish the job that Julian could not do himself. As a result, the police become involved in the crossfires and Chang draws closer to the family to bring justice.

During the episodic violence, Julian seeks comfort in Mai and tries to establish a relationship with the prostitute by introducing her to his ruthless mother. Crystal humiliates her son, by praising the memory of Billy – the older brother with a bigger cock – as everything Julian wanted to be. Without spoiling too much of the ending, the final scenes are more compelling for the audience, mainly because they revolve around mass execution and an ultimate showdown between Julian and Chang. 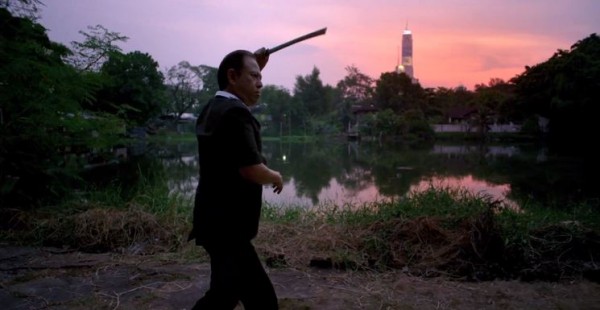 Only God Forgives is defined by Larry Smith’s amazing cinematography, which captures the perilous ambiance of Bangkok, as an exiled location. One of the best shot scenes, ‘Mind Your Own Business’, shows the exquisite night life and scenery of Bangkok, manifested into hunting grounds for an armed  criminal to escape the wrath of Chang.

The beautiful shots and flawless arrangement of lighting and objects truly enhance each scene within the film. In particular, the red and blue shades of luminosity illustrate violence, temptation and exposure of oneself against society. However, the weird delusions and imbalance of fantasy and reality throws the audience off-guard, as does the horrific torture scenes. For the most part, it is hard to understand the entire visual experience because the shots are in constant transition. 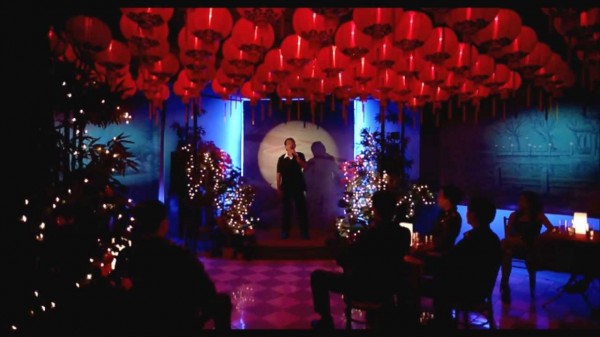 Cliff Martinez returns from Nicholas Winding Refn’s film, ‘Drive’, to compose another amazing score. The eerie, intimidating and hypnotic music is extremely impressive and memorable and serves as a highlight of the film. With the work of primary artists, Gregory Tripi and City of Prague Philharmonic Orchestra, Only God Forgives remarkably develops the dramatic suspense needed to build the thrilling and unfaithful atmosphere of Bangkok.

Only God Forgives came across as a silent film, in that the dialogue is minimal and the soundtrack is more prominent. Vithaya Pansringarm did a good job in his performance of the songs; ‘Lume Mai Long’ (Can’t Forget) and ‘Kid Teung Ban’ (Missing Home). However, the lyrics would have been more effective as dialogue, in order to build character development and unfold the narrative throughout the film. 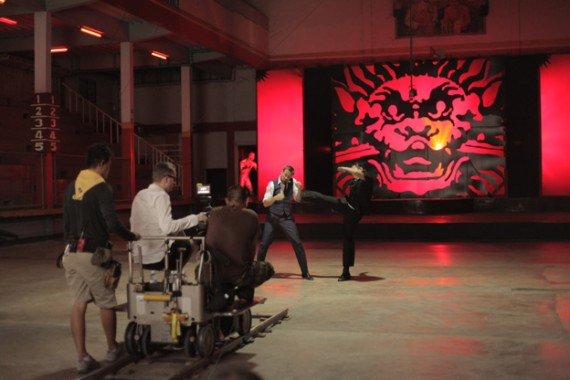 The DVD edition of Only God Forgives offers viewers behind the scenes footage, and an interview and audio commentary with the director. Nicholas Winding Refn’s first idea for the film was a man looking at his hands, to symbolise repression and anger. The director wanted to explore the concept of fighting, but was fascinated by his power to twist the commercial commodity from genres to give audiences a different experience. The behind the scenes footage, shows the actors interacting with eachother, the director and environment to determine the best way to set the scene together. It was funny to see Nicholas practice using Chang’s sword on water bottles.

Only God Forgives is neither impressive nor dreadful, rather it is absurd. The film focuses on the best cinematographic and music experience, that the storyline remains incomprehensible and unfinished. The director’s ambition of steering away from classic genre films consequently influenced the shocked response of overwhelmed and underwhelmed viewers. Ultimately, it is up to the audience to decide which side of the boxing ring suits them.