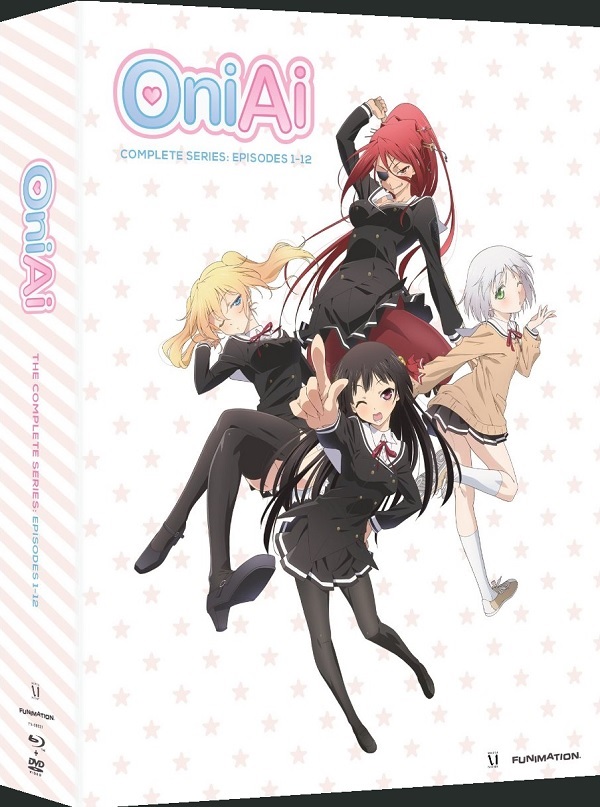 Overview
In the North American anime scene, there are a few companies that only release anime with subtitles and there are a couple that only release English dubs of their licenses. There is one that dabbles with both, but until now FUNimation was a company that would always provide every anime release with an English dub. Now for the first time ever, they are releasing an English subtitled version of the show and it just so happens to be OniAi, a series that probably never would have been released otherwise. Well, now that it has been released, is FUNimation’s first subtitle only release worth picking up?

Story
To start with let’s get this out of the way. I happen to really enjoy harem and ecchi shows to the point that anytime an anime is announced I’ll be watching it. In the ecchi harem genre there are shows that manage to bring along a plot to go along with all of the T and A and those that don’t. OniAi happens to be the latter but for a series such as this it isn’t always required as the characters and comedy can make them just as memorable. 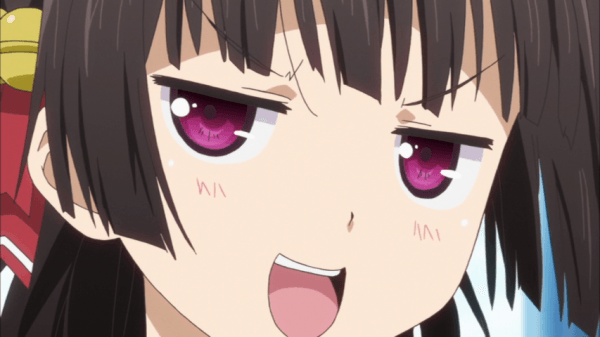 That being said, the story may seem a bit taboo to some initially but this is far from the first time a story like this has been brought West. The Himenokouji siblings have spent the last six years living apart from one another but when Akiko learns that she will soon be living together with her brother, Akito, again she is overjoyed. In fact she is happier than any sister probably should be but there is a reason for this, Akiko has such a major brother complex that she fantasizes about all of the sexual things they can do to one another.

Sadly for Akiko, and good for Akito, the two spend little time alone under the same roof as the student dorm fills up with the rest of the female members of the student council. The only heir to a mega corporation named Anastasia Nasuhara, Akito’s childhood friend Ginbei Sawatari, and the student council president Arashi Nikaidou. Even Akito’s young fiancée from his previous residence moves into the house and takes over as the dorm manager further into the series. 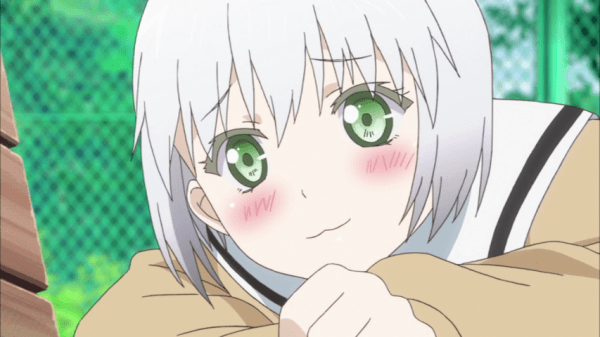 With Akito living in the residence with all of these girls, Akiko’s urges towards her brother are often kept at bay not only through the interference of the rest of the girls but also because Akito, despite doting on his sister when he can, always treats her just like a brother should and only sees her as a sister, nothing more. Still, five girls under one roof and Akito trying to support himself through a secret side-job, he has his hands full whenever the girls turn their attentions towards him.

As you may surmise from the description there, OniAi is almost the pure definition of a harem series. There is a bit of spice thrown in here with Akiko’s brother complex but it is something that has been explored numerous times in the past so outside of her never say die attitude it is pretty standard. What helps make OniAi enjoyable, and a guilty pleasure, is that despite the cookie cutter setting, I found the comedy in the series to be hilarious. 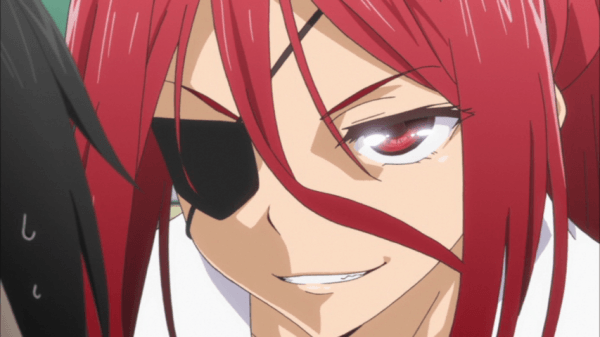 While what may make one person laugh may make another person disgusted, a lot of the comedy found in OniAi is what fans of this genre are looking for. We have the never say die brother loving sister with perverted laughing and fantasies, Anastasia who is helpless when it comes to basic household tasks has a cold demeanor and enjoys teasing the Himenokouji siblings though she does let some warmth show through, Ginbei who is a great cook but is concerned about her childish body and how Akito sees her, the predator like Arashi who goes after anyone in sight, and finally Arisa who is incredibly capable and highly intelligent but probably is a bit of an odd addition thanks to her age.

This cast of characters helps take this series which sadly has almost no storyline to it and helps make it worth watching for the comedy alone as each of these girls has their own hang-up either about themselves or Akito and there is a fair bit of development and backstory revealed for both Anastasia and Ginbei, though the rest of the cast is given very basic reasons for liking Akito. 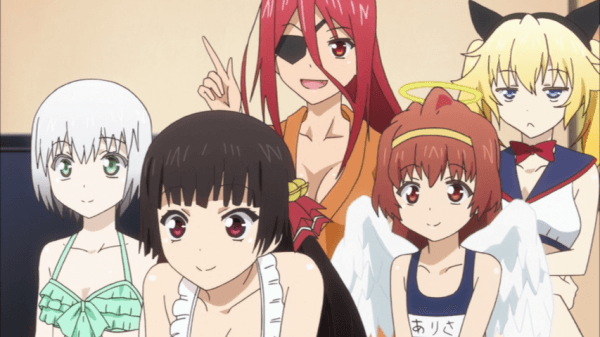 However despite how he interacts with these girls and resists his sister at every turn, Akito is a rather bland male lead with only his secret job as an author lending some worth to his character as he simply tries to ignore the various advances these girls make on him. There is an interesting bit of information dropped at the very end of the series concerning his family, but even Akito himself says that it is a story for another time, which sadly leaves viewers with little to invest in or go on except for some great character based comedy and your standard harem antics.

Visuals
OniAi is a strange series that features some great looking scenes usually followed by rather mundane low quality animation. The characters are great looking with some nice looking face designs and use of coloring for the hair and any close-up of a character’s face for an expression is priceless. Sadly many mid-distance shots or group images feature very low quality looking animation and poor facial detail with a lot of inconsistencies. 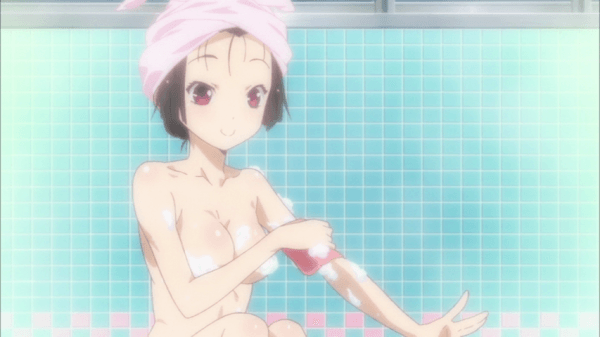 As far as the backgrounds and scenery go, OniAi is also very limited as most of the events take place at the dorm or at school, though it is nice to note that each girl’s room has a different theme. For fan service, OniAi takes things to the limit by providing a lot of linework for a girl’s body and also shows nipples, however despite initial impressions of throwing a lot of fan service at the viewer all the time, a lot of the ecchi moments come from Akiko’s fantasies, the president’s advances, or various moments of trying on clothing/swimsuits and subsequent wardrobe malfunctions.

Audio
Now this is the very first time that FUNimation has released a title without an English dub but to be honest, it probably would have been awkward for the English voice cast to perform a lot of the lines found in the series. It also is likely for the best as the Japanese cast has done a great job with these characters as Anastasia’s deadpan tone and Akiko’s laugh and the sound effects she makes probably wouldn’t have transferred into English well. 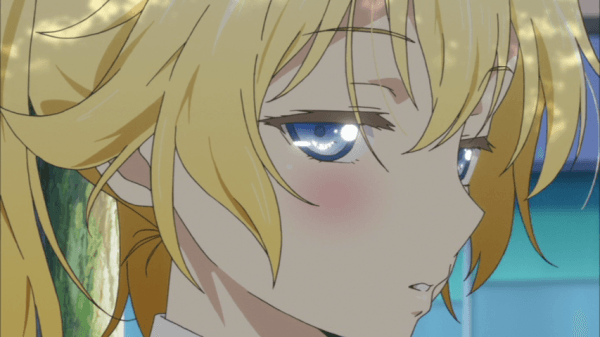 The background music throughout OniAi is pretty basic though a  few standard themes are used for specific moments. The opening theme “Self Producer” by Minori Chihara, the voice actress for Anastasia, is very catchy while the ending theme “Life is Love” is sung by the female cast and is similarly enjoyable.

Extras
Since this release does not contain any English voice work, OniAi does not come with any of FUNimation’s standard commentary tracks. Instead it features one nice set of bonuses alongside a bunch of standard on-disc extras. The standard inclusions include two clean versions of the opening song, one clean version of the ending song, albeit not the final version of it, and a US trailer for the show. 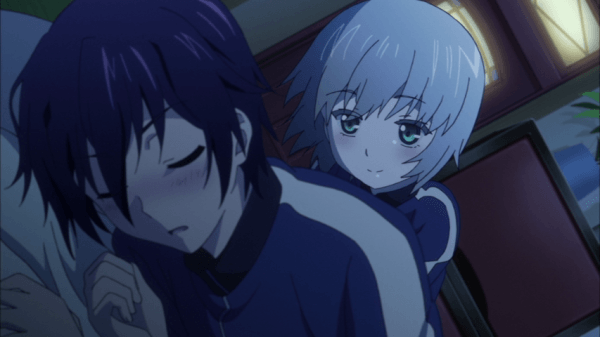 The final bonus includes almost twenty minutes of features broken into small segments. These features focus on the female cast and while they start with basic chibi art, it ends up with each of the characters naked in lewd situations, including one that may make people feel uncomfortable due to the age of the girl highlighted.

Overall
OniAi is a guilty pleasure, plain and simple. The story is nothing to write home about as there pretty much is none outside of Akiko’s brother complex and a bit of backtstory exploring Ginbei and Ana’s feelings for Akito. However it is helped thanks to some great comedic moments provided by a likable cast of female characters playing off a basic lead that usually makes jokes funnier thanks to his attempts to dodge his current situation, even though the comedy will likely only work for certain types of anime fans. OniAi’s fan service heavy release probably wouldn’t have made it overseas if it wasn’t for this subtitle only option, but fans of harem series would be careless to let this series pass them by because of that.