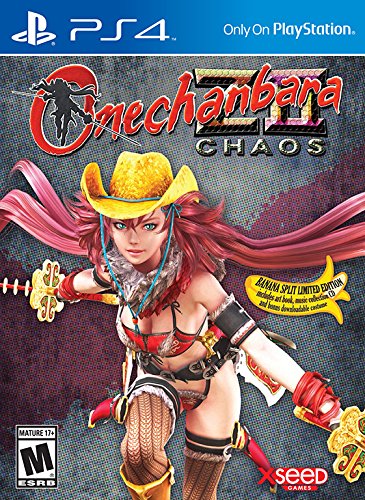 Overview
Tamsoft and D3 Publisher have been producing a number of Onechanbara titles in Japan for over ten years but for almost everyone in the West, the first time we learned of the series, was when Onechanbara: Bikini Samurai Squad was released back in 2009. The title may have had plenty of faults at the time but gave players a title that embraced hyper-sexualized characters with plenty of violence and gore.

Although a couple titles have been skipped since then, Onechanbara Z2: Chaos has now been released in North America by XSEED but the question is, has this series managed to evolve well enough over the years while still sticking true to the heavy fan-service that many remember the original game for?

Story
It is worth noting that since Onechanbara Z ~Kagura~ was not released in the West a few people may be a bit caught off guard by the introduction of two brand new characters named Kagura and Saaya. Retail copies of Onechanbara Z2: Chaos feature a little booklet that briefly discusses the events from that game however and explains how these two ended up alongside the previously known characters of Aya and Saki. 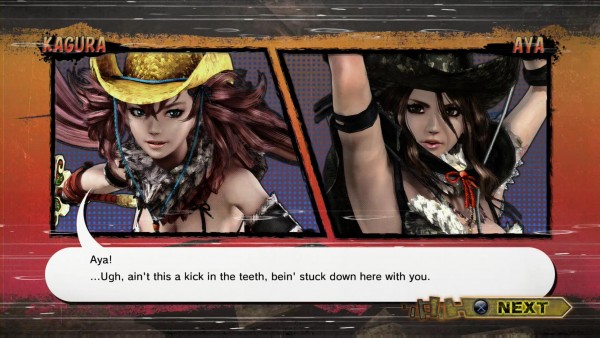 Of course, digital titles may miss out on this little bit of information without checking within the game first, but thankfully the game doesn’t really hold character knowledge as something extremely important as it is extremely easy to get the gist of the relationship between the two pairs of sisters, with Kagura and Saaya being half-blood vampires/half-blood Baneful and Aya and Saki still possessing their Baneful blood from before.

Onechanbara Z2: Chaos takes place almost immediately after the events of the previous game and although near the start the two pairs of sisters are eager to begin fighting with one another again, the appearance of another new foe continues to hold the tenuous alliance together as Kagura and Aya find themselves separated from Saaya and Saki only to be reunited by working together. It is worth noting that Onechanbara Z2: Chaos’ storyline is as completely ridiculous and as over-the-top as one would expect if they know of the series’ history (though nothing tops the zombie whale of an earlier title). 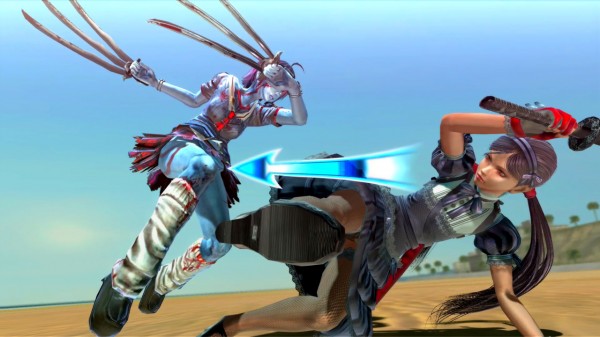 That being said, it is also an incredibly short storyline to play through as even on the harder difficulties players will find themselves managing to complete the story in roughly three hours, even less if they decide to take things easy the first time through. This is something that is rather unfortunate as it doesn’t really give players too much to work with especially in the way of worthwhile development but it does serve its purpose without overstaying its welcome, as you’ll likely find yourself heading through the game more than a few times to unlock plenty of little bonuses that will be mentioned later.

Gameplay
While the story may be iffy at best, once these four women hit the battlefield they become nearly unstoppable killing machines. All four of the girls have unique combat styles that feature both a primary weapon, secondary weapon, and (except for Saki) a sub-weapon for long range attacks. While it is entirely possible to simply button mash your way through most of the battles found in Onechanbara Z2: Chaos, those doing so will be missing out on a rather deep system that allows for precisely timed combo attacks (many of which can only be triggered this way) and some extremely fluid team attacks. Alongside standard attacks players an also unleash skills by filling up an Ecstasy Gauge that can be swapped between with a tap of a button. 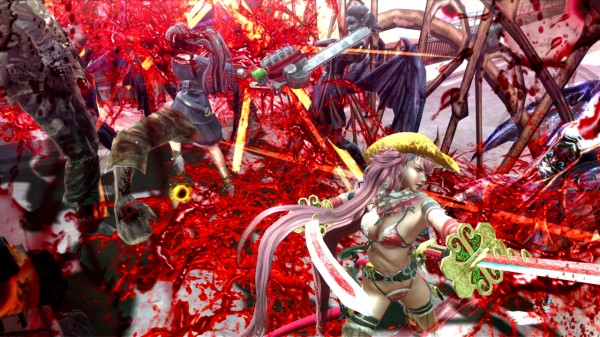 As players progress through the game and earn Yellow Orbs they will be able to unlock additional abilities for their characters to utilize, ranging from additional combo attacks for their weaponry to specific rings that provide the girls with some bonuses, including a ring that increases the narrow time window for COOL attacks that rely on the aforementioned timing to unleash powerful attacks. While players can only control Aya, Saki, Saaya, and Kagura one at a time, they can be brought into battle as AI controlled fighters for a short period of time by tapping the touchpad when the words “I’m Ready” appear under their icon.

Outside of the standards of combat, players will still have to keep an eye on how bloody their weapons become as the bloodier a weapon is, the less damage it does, meaning that they will need to be cleaned often with a simple tap of the R1 button. As for the girls being bloody, well that is how they manage to unlock their true forms as both sets of sisters are capable of transforming into powerful sexy looking demon forms when they are spattered with enough blood. Saaya and Kagura are able to transform into DareDrive forms while Aya and Saki change into Xstatic forms and each form features a major boost to the character’s strength. 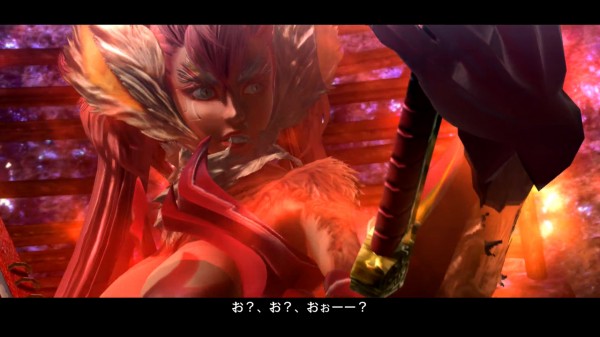 Between flashy transformations and the ability to use powerful Ecstasy skills, this can lead to some incredibly fast paced looking battles with plenty of blood flying around as well as special effects being shown as it is entirely possible to constantly swap between the girls in combat, making it a bit difficult to keep track of the action. Thankfully the title never shows any kind of slowdown no matter how intense the action on the battlefield actually becomes, though this may be due to how poor some of the stages actually look but more on that in a bit.

As mentioned earlier, Onechanbara Z2: Chaos is a rather short title and even on harder difficulties most fights can be tackled rather easily due to the enemy AI being incredibly sub-par. While the girls are capable of unleashing long combo strings and dashing through the air, usually bringing a few enemies along for the ride, standard foes will be fairly unaggressive though at least their attack patterns do appear to be fairly random. This is far different from the boss opponents that usually feature the same type of attack patterns that are easy to memorize, though it is nice to see the touchpad being utilized for swiping quick time events that occur during such fights.

Visuals & Audio
Now earlier I mentioned that despite how intense and flashy the combat can become that Onechanbara Z2: Chaos never slow down and holds onto that smooth experience? Well that may partially have to do with the fact that, although the levels are nicely varied with a wide range of locals, they are all incredibly bland looking and are flat out ugly looking at times while the actual enemy designs do feature a nice bit of detail and basic variety, ultimately start to feel rather similar after a short period of time. 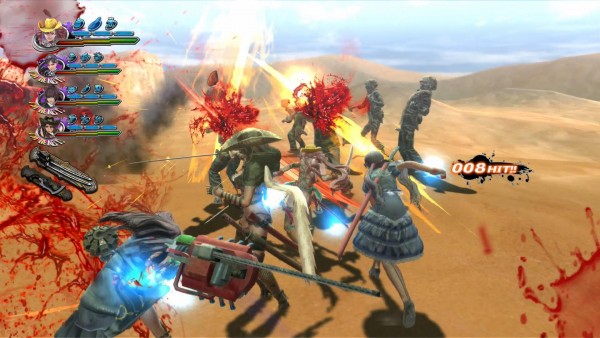 Thankfully the majority of the time spent into keeping the world filled with a number of lively looking colors and of course, stellar looking character models for the four main girls. All four of the girls feature impressive levels of detail to their basic models (and are even better looking once transformed) and throughout your time with the game you’ll be unlocking countless accessories, hairstyles, and costumes to create characters as funny/strange looking or as incredibly sexy/naked as you wish. This is the type of game that knows what it audience likes as far as lewd outfits are concerned and delivers on that regard. 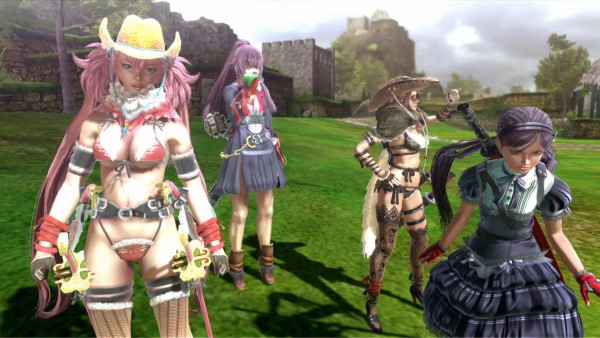 For the first time in the series’ history, Onechanbara Z2: Chaos has been given a full English dub (though the standard Japanese voice track is also included) which is a nice touch considering how ridiculous and vulgar the voice work can be at times really shines through thanks to being dubbed. As far as the soundtrack is concerned, the battle themes are fast paced enough to match the style of combat while the main theme song is certainly a treat.

Overall
This isn’t the type of game that will be pushing boundaries in any way on the PlayStation 4 nor does it deliver a stellar storyline, but it does offer everything that fans have come to expect from the series as it offers tight fast paced combat mechanics and plenty of fan-service laden costumes to unlock and enjoy. If you want a fun and fast action game where the only depth lies within the combat system and features plenty of risqué outfits and dirty dialogue then you should look no further than Onechanbara Z2: Chaos.