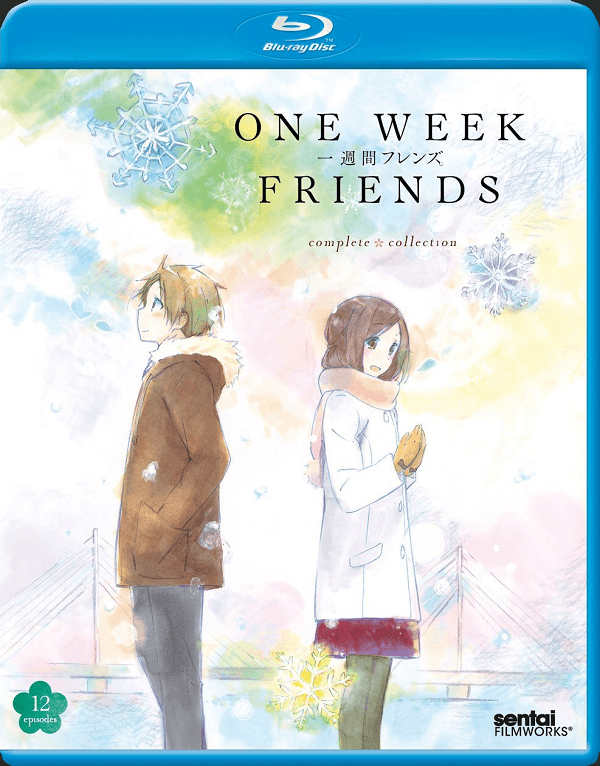 Overview
The concept of using amnesia as a storytelling device is incredibly common in most forms of media. In video games it tends to be a method to place players in a role of a grown protagonist who is a blank slate and can be built from there. However while amnesia in stories is usually used for to set up a story, rarely does an entire story focus around someone suffering from constant memory loss. One Week Friends is such a series and after a successful manga run the source material has been adapted into an anime. The question is, is this series worth remembering?

Story
Yuki Hase has always been a fairly outgoing student and when he notices that one of his classmates, Kaori Fujimiya, always seems to be alone, he decides to approach her and try to make friends with the girl. Unfortunately for him, she quickly turns him down and although he is initially shocked that he was so abruptly was turned away, his friend Shogo encourages him to try again. After a few more attempts he learns that Kaori suffers from a strange type of amnesia. 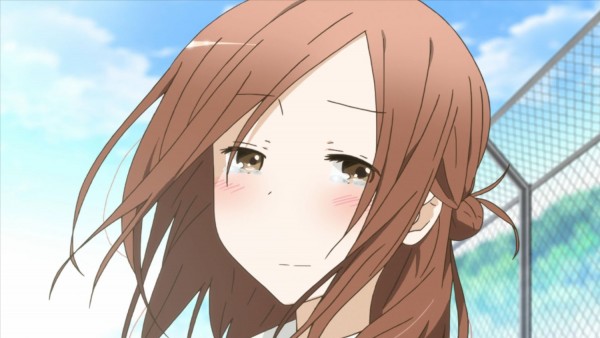 Ever since she was a child, every time that Monday rolls around Kaori loses all memory of any friends that she happened to have made over the past week. Because of this amnesia, she has distanced herself from others and has completely stopped attempting to make friends in an effort to do as little harm to others and herself as possible. Knowing this, Yuki opts to stick with Kaori and the two become friends, even if it means that every Monday they will have to start over.

In doing so Kaori’s recently shut life begins to return and with Yuki prepared to do whatever it takes to help her remember soon Yuki’s own friend Shogo and eventually another girl named Saki begin to interact with her as friends. Though the effects of Kaori’s amnesia remain a challenge, every week the group takes steps to help keep their friendship alive and show Kaori that her condition may cause problems with her life, it isn’t a reason to stop living. 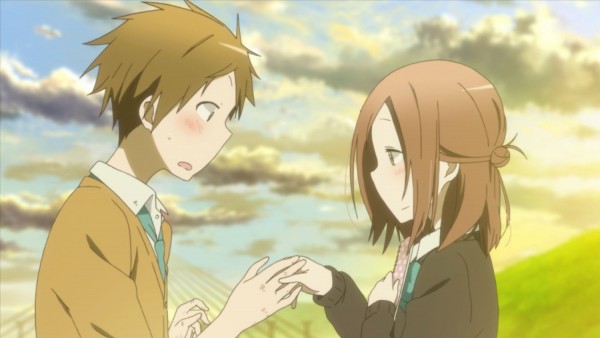 One Week Friends is an incredibly saccharine series that handles a rather odd premise in a rather expert manner. While there are some elements of drama that are introduced thanks to Kaori’s amnesia, you almost would forget about that thanks to the slow charming pace that the series takes. By focusing primarily on the various events that Yuki, Kaori, Shogo, and Saki take part in and what they do from week to week it may seem like very little is actually happening outside of the charming slice of life elements, viewers will notice small changes that take place over the course of the series.

Various little activities such as studying together, eating crepes, or putting up posters are what make up One Week Friends and it is easy to get lost in the sweet calming flow of the series but throughout these events we see various elements of Kaori’s life open up and learn more about her past, what caused her to suffer from this type of amnesia in the first place, how Kaori feels about Yuki and more. By working these types of character development and charming emotional scenes into everyday life we get to see these characters truly shine and deliver numerous heartwarming and bittersweet moments that hit home thanks to how much the audience is built up to care about these four. 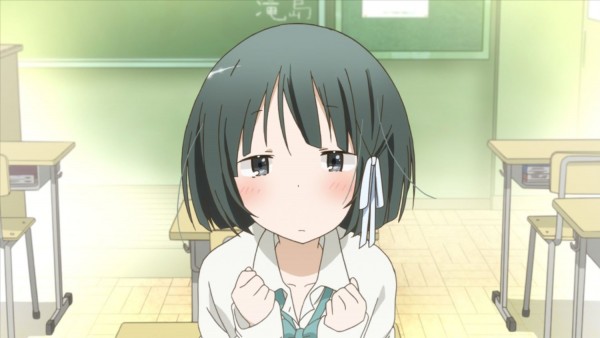 This is helped by the fact that these four characters all grow throughout the series. Yuki doesn’t magically solve Kaori’s issues and is just as prone to being led astray by his emotions, such as jealousy when Yuki becomes friends with Shogo, as any other character. This leads to moments where Kaori can stand up for herself and help strengthen the pairs relationship while Shogo and Saki’s off-balance pairing creates a charming and humorous duo that viewers will easily be able to tell will eventually develop into something more as the series progresses.

Oddly enough, where One Week Friends loses some of its charm comes when elements of drama are introduced. On a few occasions throughout the twelve episode series the aspect of Kaori’s amnesia is really pushed hard through various circumstances, such as losing an important item, an old face from Kaori’s past returning, or one of the group no longer wanting to cause any pain to the others. These moments end up feeling rather forced and while at least one is a bit believable, it merely serves as a way to try and stir up unnecessary issues in a series that is at its best when developments feel as if they are happening naturally, even if it does end up leaving viewers with an open end once everything is said and done.

Visuals
It is clear while watching One Week Friends that Brains Base, the animation studio, really knew what they were doing when it came to presenting this show to viewers. Utilizing a pastel water color style for the series and soft-featured but well taken care of character designs help set the mood for a series that is more about character interaction and small motions rather than large movements. 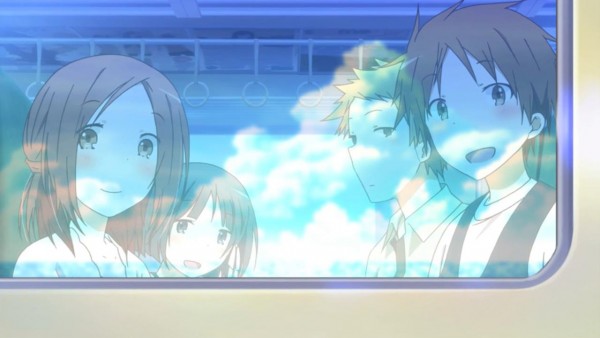 Combine this with very well detailed background artwork and a method of using hazy white edges around scenery from time to time to show the focus on Kaori and Hase or the separation that Kaori has from the world and you have a series that is handled perfectly by its animation studio.

Audio
Sentai Filmworks has released One Week Friends with only the original Japanese voice track accompanied by English subtitles. Viewers shouldn’t have much of an issue in this regard however as both Sora Amamiya’s portrayal of Kaori and Rumi Ookubo’s handling of Saki help serve as stand out performances while the rest of the cast also fits their roles very well here. 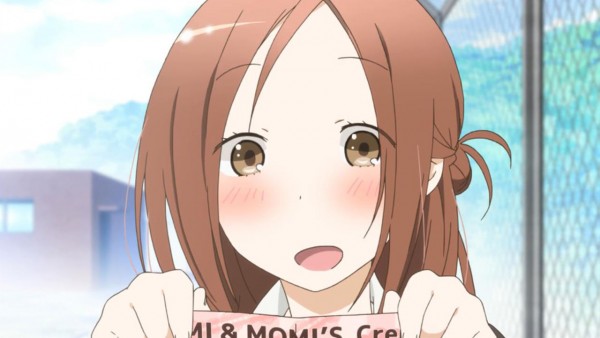 The background music throughout One Week Friends is used very effectively in an effort to blend in with the scenery and enhance the mood of certain scenes. As far as the opening and ending themes go, the opening is “Niji no Kakera” by Natsumi Kon and the ending is “Kanade” performed by Kaori’s voice actress.

Extras
One Week Friends’ Blu-ray release comes with a number of special features. There are your standard inclusions such as clean versions of the opening and closing animations, trailers for other Sentai Filmworks projects, and Japanese promos, but accompanying these standard inclusions are “Kaori’s Journal Shorts.” These little shorts are an enjoyable cute addition for fans to see a little something extra from Kaori’s point of view from what she has written down over the course of the days she spends with the group.

Overall
One Week Friends could easily have used its amnesia gimmick to take some wide emotional swings or cause too much drama from happening but instead the series guides viewers through the lives of four friends as they interact with one another through some amazing slice of life content. Although it may not be a fast moving show and still feature a few bumps in the road, these issues are eventually resolved in a satisfying enough manner. As such One Week Friends is the type of satisfyingly sweet and gorgeously animated series that viewers can sit down and enjoy as the well-written character interactions take place.
Capsule Computers review guidelines can be found here.