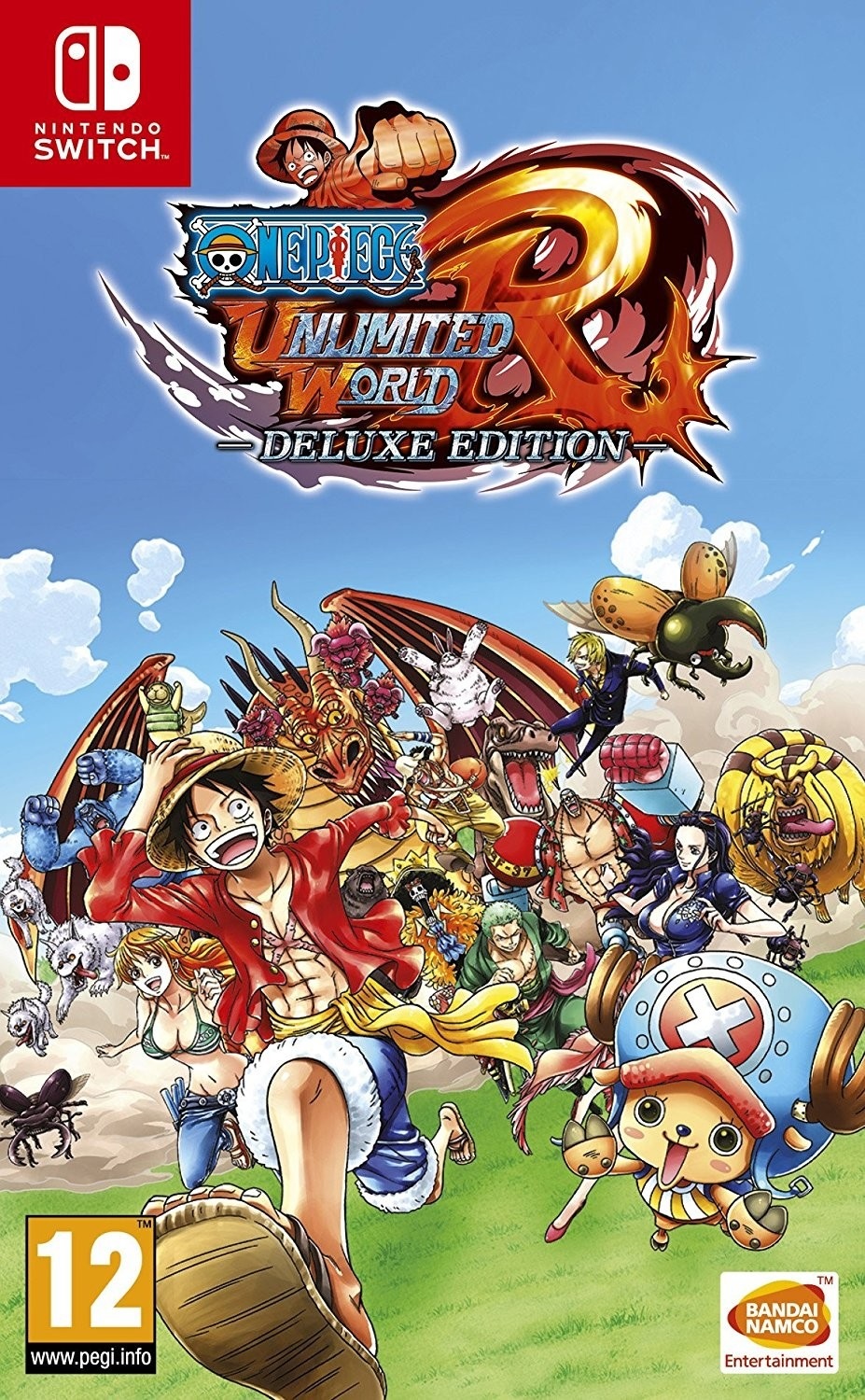 Very few franchises can say that they have managed to last for over twenty years, especially in the manga world and of these franchises even fewer can say that they’ve managed to gather such a massive number of licensed video games as One Piece. Since its creation back in 1997 the series has had games appear on every manner of console and handheld device and now the first title has arrived on the Switch, though you may have already played it before if you’re a die-hard fan of the series. After first arriving on the Wii U and 3DS a few years ago, One Piece: Unlimited World Red – Deluxe Edition has made its way to the Switch but is it still worthy of your time?

It is worth noting that unless you’re highly familiar with the One Piece series, up to the point of at least being into the post-time skip era of the series, that you will likely be coming across plenty of references and material that will go completely unexplained. Outside of brand new characters the game does little to explain the various abilities and relationships of the characters so be prepared for that if you’re jumping in without being a fan of the series.

For everyone else though, it is highly interesting to see that rather than trying to adapt an already well-trodden storyline One Piece: Unlimited World Red – Deluxe Edition works more as the many filler arcs that take place between the larger story events in the series. The story begins with Luffy and the rest of the crew bringing a newfound friend named Pato back to the Island of Promises where the village of Transtown is located. Once there Luffy ventures out to explore the town while the rest of the gang splits up only for them to be whisked away to an unknown location, leaving Luffy with only Pato by his side. 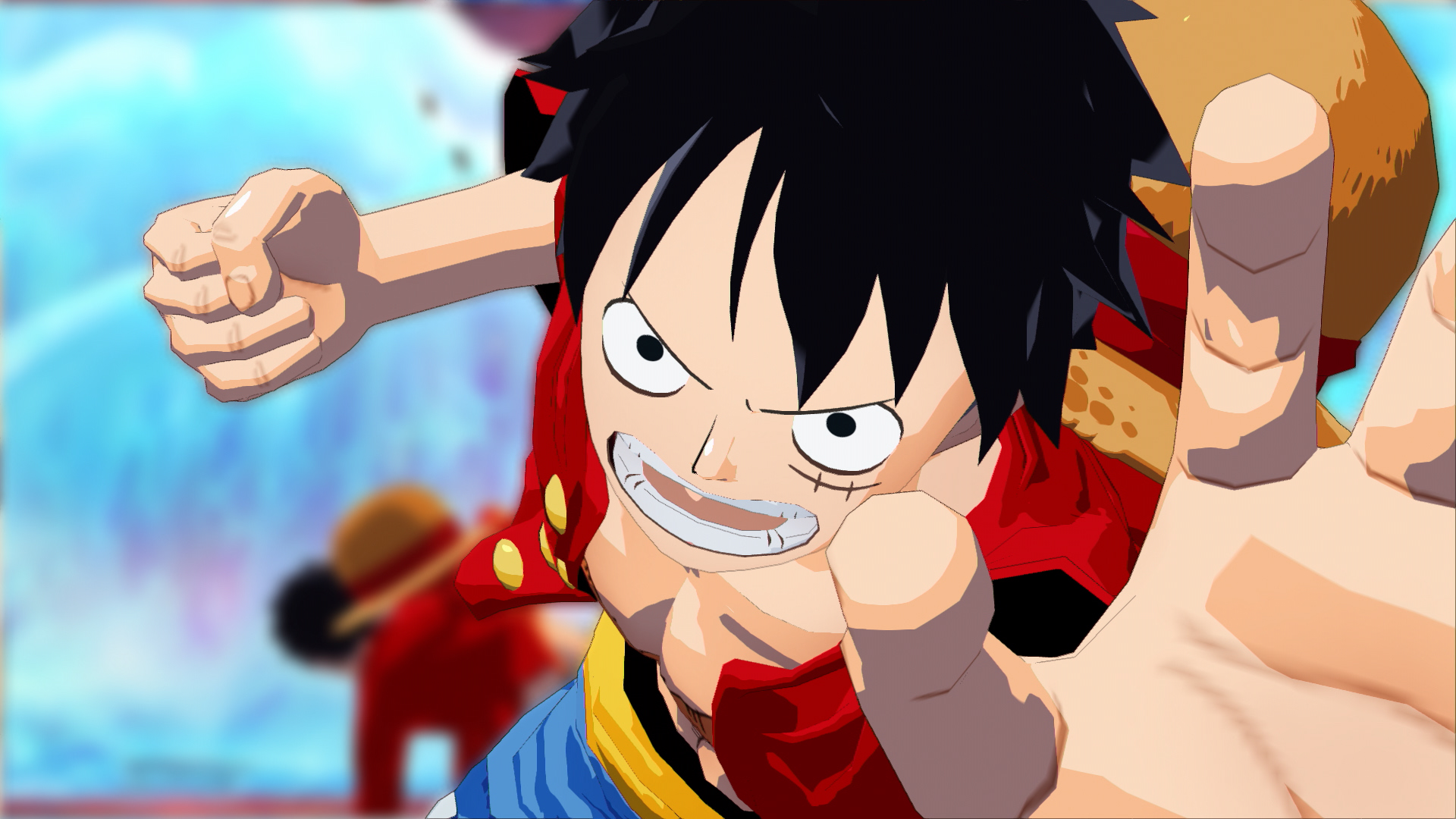 Luffy is quick in venturing out to rescue his missing crew only to find that they have been taken by a pirate known only as Red. To make matters worse, on his journey to rescue his friends a number f familiar places and familiar enemies arise once again to face off against Luffy and the crew, something that longtime fans of the series will certainly appreciate since many of these characters haven’t been seen in years.

The storyline works great as a video game as it feels like one of the best filler arcs that a fan could ask for by giving players plenty of unique twists and turns as they battle familiar faces and travel through new areas along the way. As one would expect with standard filler the end result doesn’t play much of a role in the long run of the storyline but it does create a satisfying storyline for shonen fans to follow.

For the most part the city of Transtown serves as the game’s main hub area as that is the location where players will be able to use the various items that they gather in levels to help upgrade the town by building a pharmacy, restaurants, and more in an effort to unlock additional content that can help you in your main journey. This does make for a bit of a grinding feel from time to time but this isn’t a major issue for the most part thanks to the colorful appeal of the village. 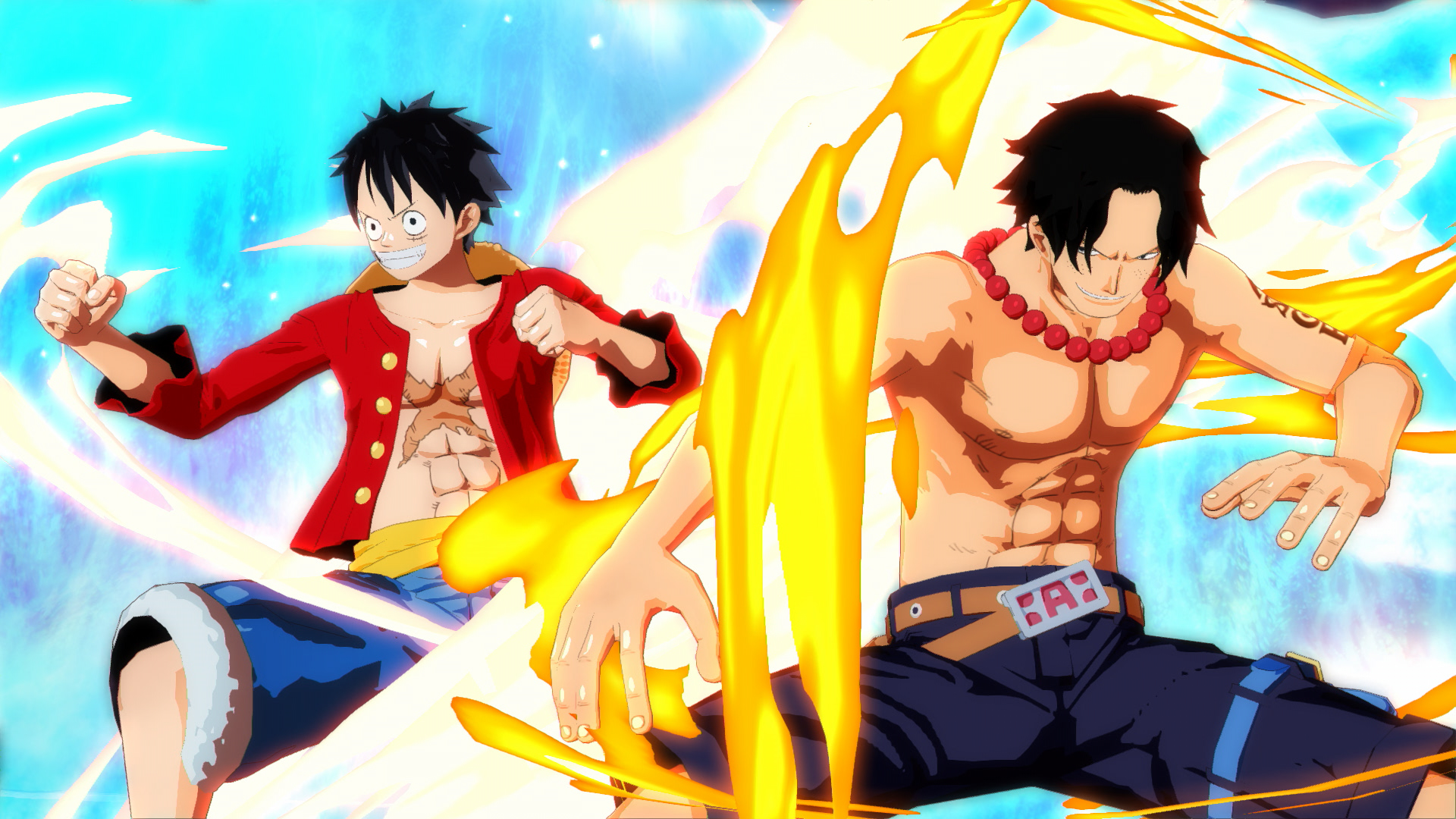 The actual levels that you will be playing through serve as mostly straightforward affairs in self-contained areas where the player will need to face off against various groups of enemies, smash objects to get loot and other resources to use on the town, and finally face off against an, almost always, memorable boss that requires certain strategies to beat. These boss battles end up being the biggest highlight for most of these levels as their unique attacks, as well as an almost always dreadful camera, make them quite challenging to beat.

The combat system for Unlimited World Red is easy to understand for the most part as the combo system makes use of a set of light and heavy attacks as well as special attacks that are unique to each character, Luffy for example has plenty of long range attacks while Nami makes use of her staff and weather abilities to deal damage, and so on with each character being given some time to shine. In fact, players even have the ability to unleash team attacks at the expense of their SP meters but this is something that rarely is an issue as the meter recharges quite quickly.

Despite having a fairly easy to learn combat system the actual result is a bit disappointing this is mostly due to the fact that the combo strings that are unique to each character quickly become mundane as you fight through what is, generally, an easy to beat group of mob type enemies before battling on to the next area. Combine this with a generous counter timer and most standard battles will be a breeze although you’d almost wish they lasted longer as many of these levels are scarcely populated with enemies popping up only here and there and even destructible objects being kept to a minimum, something that likely is carried over from the game’s origins as a handheld title. 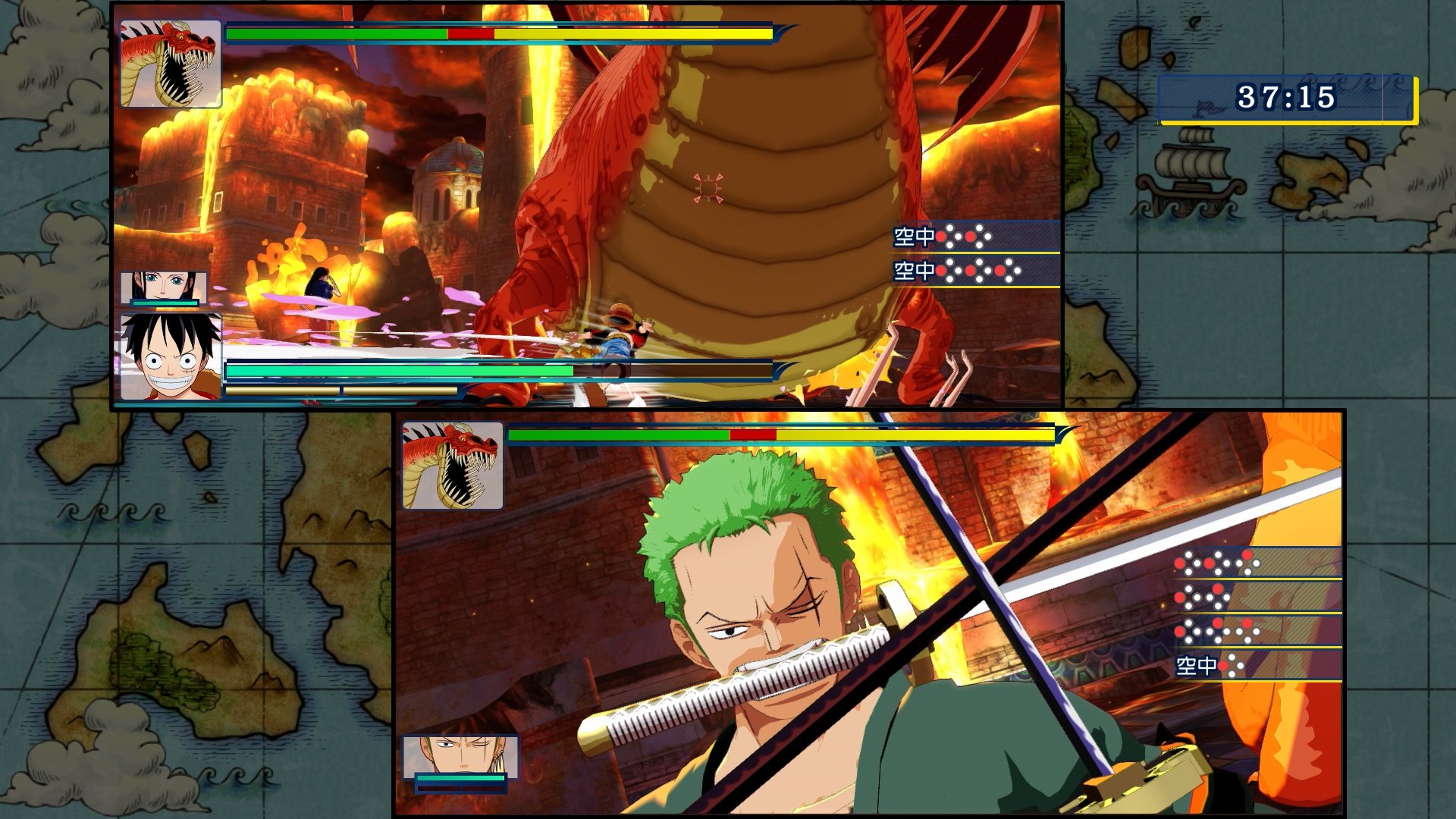 Players will also have the ability to make use of a “strong word” system that allows for various stat boosts and skills to be tied to catch phrases that can be equipped which is a bit unique if they are thought of as simple pieces of equipment and little else. Also thanks to the fact that this is the “Deluxe Edition” of the game it comes with all of the DLC that was released for the original game but for the most part this just ends up as extra costumes for the cast, most of which are based off of movie appearances, so don’t expect too much in this regard.

One thing that does work quite well in regards to One Piece: Unlimited World Red – Deluxe Edition being released on the Switch is the ease of being able to play with two players. The game makes an easy adjustment to being able to be played with a single Joycon, meaning that setting the console in its docking station and playing with a friend in split screen co-op is quick and painless, though if you try to do this on a table-top type of setting then you’ll likely be struggling with the smaller screen size being split between the two characters.

Perhaps thanks to the game’s anime aesthetic, the title has managed to make the upgrade to the Switch flawlessly. The character designs, even with the lackluster bonus costumes, are perfect matches to their anime counterparts and their special moves are copied perfectly here. The enemy variety is a bit disappointing; as is the level design, but the bosses really continue to shine through here both in design and combat quality. 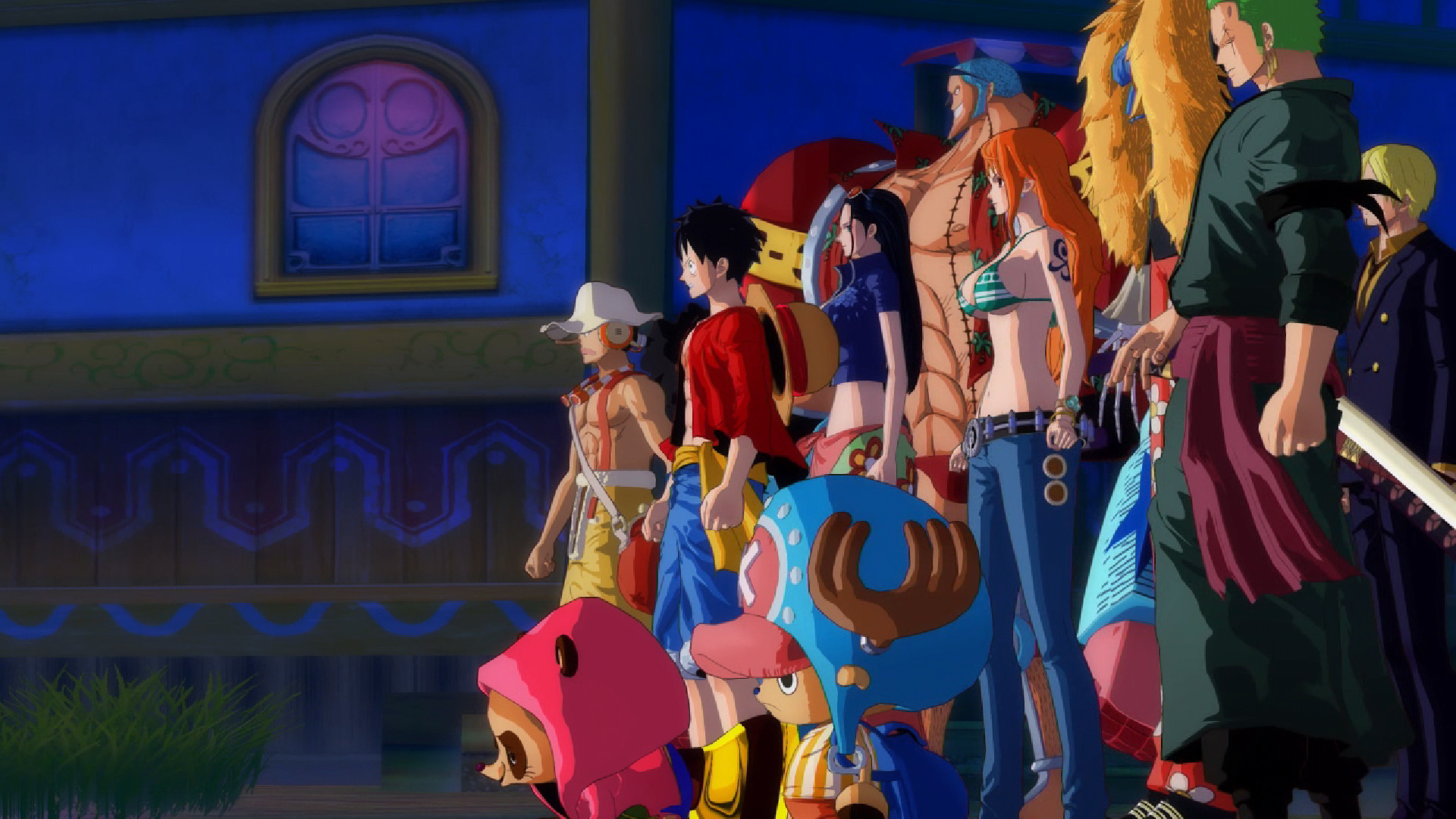 It is worth noting that Bandai Namco has only included the original Japanese voice acting for this game though that should be just fine for longtime fans of the series as all of the original voice actors sound like they have retained their roles here. The soundtrack also works quite well here with plenty of catchy tunes and fitting themes matched with the various areas players will be exploring.

For the most part One Piece: Unlimited World Red – Deluxe Edition makes the transition to the Switch without issue as the combat remains enjoyable, if a bit stale, and varied with the multiple characters to choose from and delightful bosses to face off against. The bonuses included in the deluxe version may not be worth picking up the game a second time for if you’ve played it once but are nice inclusions for new players looking for a decent brawler with a satisfying story on the Switch.

One Piece: Unlimited World Red – Deluxe Edition is showing its age a bit but still manages to deliver a decent brawling experience coupled with a satisfying story that will delight fans of the series and give Switch fans something extra to easily play with a friend.
7.5