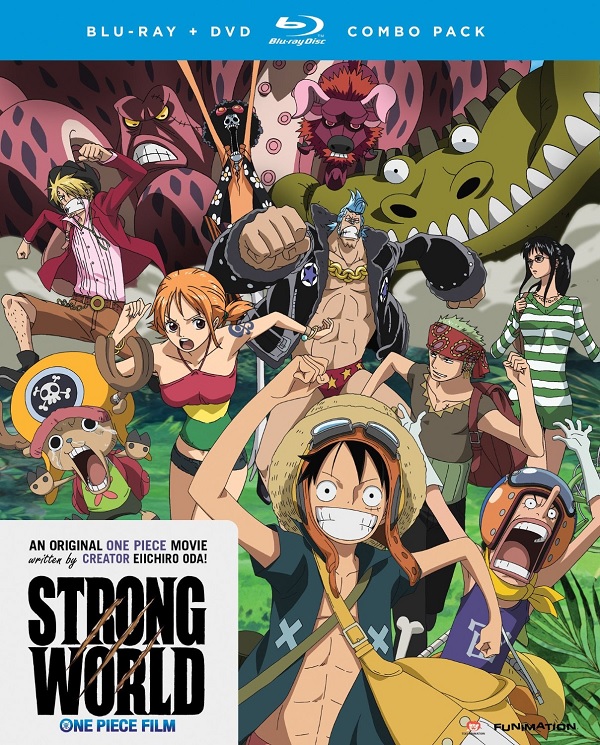 Overview
Whenever an anime breaches the hundred episode mark, it is clear that the series is quite popular and studios often take advantage of this popularity by releasing a few movies for the series. This is quite popular with the shonen genre especially, with shows such as Dragon Ball Z having over ten movies and now One Piece’s tenth movie has been brought over to English speaking audiences.

Now, most of the time these movies are a simple side-story with no correlation on the main plot, however in the case of One Piece: Strong World, we have the English debut of a soon to be main character. Does this unique little addition to Strong World make it worth picking up for One Piece fans?

Story
While sailing sometime after the events of the Thriller Bark arc, as demonstrated by a certain skeleton on their ship, the Straw Hat crew learns that an unknown force is causing massive destruction back in East Blue, where the majority of the crew originated from and where many of the friends they left behind still reside. 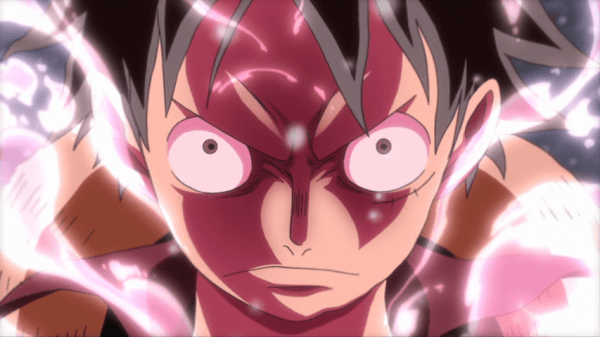 Putting their adventure on hold, Luffy and the rest start heading towards East Blue to try and put a stop to the city destroying force. While on their way there, a strange floating pirate ship appears above them and after Nami provides a warning about an approaching storm, the captain of the Golden Lion pirates named Shiki introduces himself to the Straw Hats and thanks them for their warning.

He even offers to help them on their way to East Blue as a reward for their help, but unfortunately for the crew and for Nami, Shiki has other plans in mind as he scatters the Straw Hats across numerous floating islands while kidnapping Nami in an effort to recruit her into his crew as their new navigator. As such, Luffy and the rest must reassemble while facing off against some of the strongest and oddest looking creatures on these islands and try to rescue Nami from the clutches of Shiki. 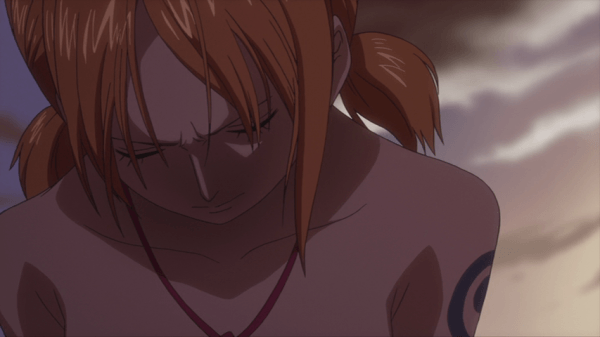 As far as movie storylines go, One Piece: Strong World is fairly impressive even though it does tend to re-tread old ground from the main series, what with Nami becoming an unwilling hostage to a pirate crew at the risk of her hometown being destroyed if she doesn’t agree to do what the bad guy says, though it must be said that Shiki makes for a far more impressive enemy than Arlong did, as Shiki’s power of gravity manipulation and unique backstory involving his legs, or lack thereof, make him quite intriguing.

Perhaps it is because his minions prove to be rather useless or that the various genetically enhanced creatures that run rampant through the islands appear rather imposing at first but are mostly paper tigers, but Shiki could easily pass himself off as long running villain in One Piece. As I just mentioned Shiki’s followers are quickly forgettable and tend to be on the annoying side as both of his main aids are walking jokes that only provide a small chuckle the first time they are used but fail terribly after the fact and eventually become rather annoying. 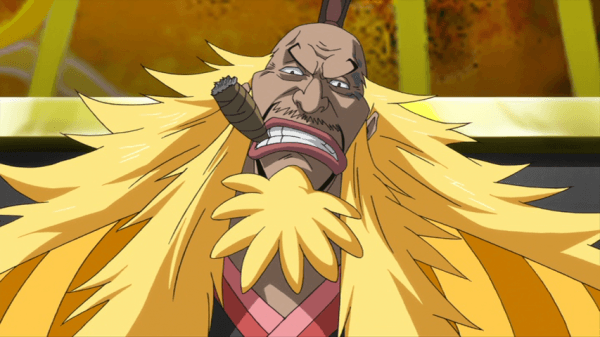 With Shiki serving as a legitimate threat and having a decent plan under his belt, it helps give the Straw Hats’ fight more purpose. Thanks to the number of characters in crew, a few are relegated to side-duty with Franky and Robin barely receiving any meaningful screentime and even Brook, making his English debut, only receives a small amount of screen time compared to the likes of Chopper and Usopp. However despite that, the story features some nice build up throughout the first half of the movie with a satisfying amount of action to close things out.

Visuals
Thanks to One Piece: Strong World having a higher animation budget, most of the film features some rather impressive looking visuals. When the Straw Hats are scattered across different floating islands, each island has its own unique design and ecosystem with a variety of wild animals for the crew to face off against as they focus on coming together and defeating Shiki. 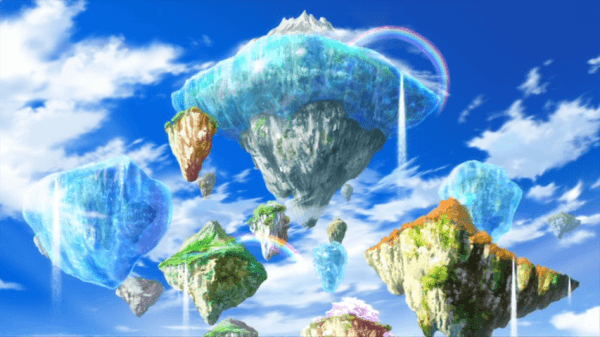 As for the characters themselves, a nice level of detail has been added to each character and they undergo a few costume changes throughout the movie which is a nice touch compared to the standard clothing we’ve seen them in a hundred times so far. The fluidity of the fight scenes and how detailed most of the attacks are show that the animators had a lot to work with in Strong World and it benefits greatly from it.

Audio
To be fair, it has been quite some time since I’ve heard the FUNimation dub for One Piece but all of the characters from the main season retain their roles in the cast and handle their roles nicely. Being the English debut of Brook, we have Ian Sinclair handling the role and thankfully he handles it quite nicely with all of the character’s traits making the transition into English. 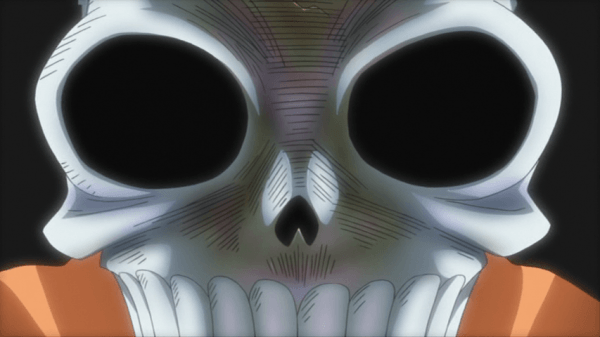 As for the rest of the audio, the film features some impressive background music at key points of the story and also has an enjoyable ending theme.

Extras
As far as bonus features go, One Piece: Strong World features only one notable piece of extra content is included in the release. This happens to be the 20 minute long Behind the Scenes of One Piece: Introducing Brook feature. Joining this is a simplistic set of trailers for other FUNimation anime and the US trailer for the movie. 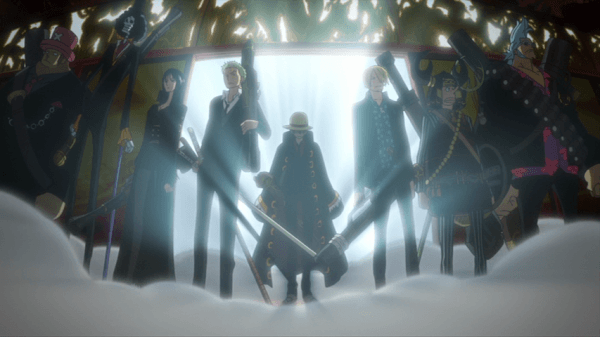 The Behind the Scenes features Ian Sinclair, Brina Palencia, the voice of Chopper, and Mike McFarland who directed the dub and a number of fans as they discuss Brook and why Ian was chosen to voice the new character.

Overall
While a number of the Straw Hat crew, oddly enough even Brook, are given little meaningful screentime in One Piece: Strong World, the movie is a blast. Although his minions may be disappointing, Shiki boasts a powerful array of powers and an actual plan that seems viable enough to work. This makes Luffy and the others’ fight against him all the more meaningful, especially now that Nami is in danger once again and the only way to save her is with some impressive looking fight scenes.