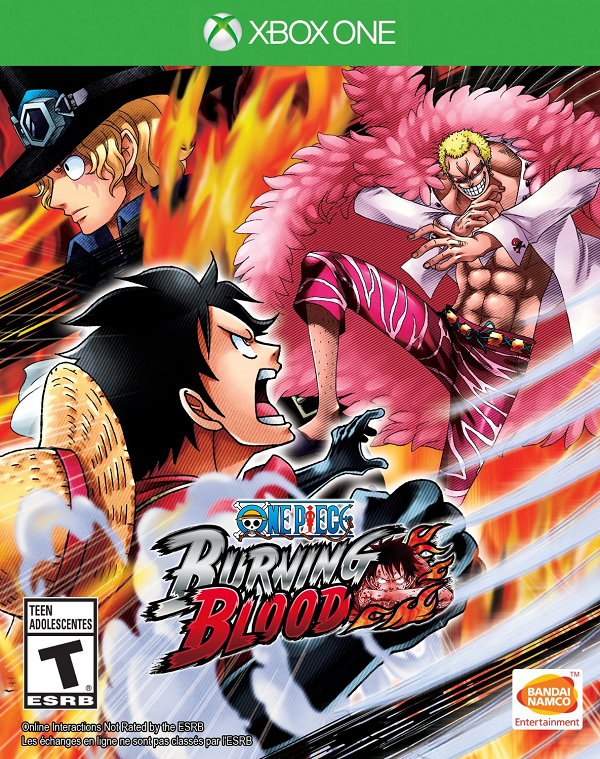 Running since 1997 and showing no signs of stopping anytime in the near future, the One Piece manga has is a massive property and one of the most popular series to date. This means that it is of course a great source for video games to pull from but only in recent years have many of these games been released in the West. Now with a fresh fighting game in the form of One Piece: Burning Blood arriving overseas, does this anime fighting game offer more than just a colorful cast?

One Piece: Burning Blood ’s storyline is designed a bit different from past One Piece titles. Rather than try and provide a glimpse at larger story arcs while progressing through various stages, this title focuses entirely on one of the most memorable, character action packed arcs of all, the Marineford Arc. Titled The Paramount War here in the game, this features material right from when Luffy arrives with the freed prisoners from Impel Down in order to put a stop to Ace’s execution alongside the Whitebeard pirates and many others who have joined their cause. 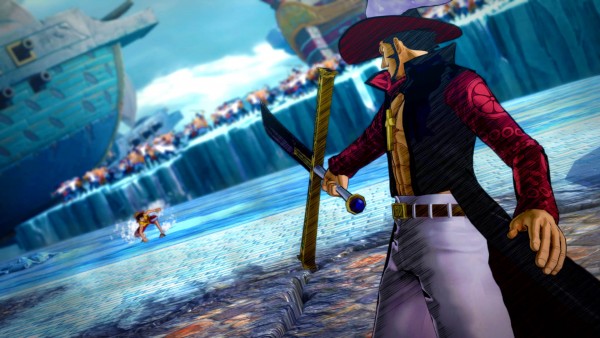 The story follows the battle from four viewpoints, with each one being unlocked after completing the previous one, as the pirates battle the Marines and the Shichibukai. This includes three from the pirate’s side as well as one Marine. I must say that although the story mode progresses through fights that range from being incredibly simplistic to spiking the difficulty to a massive scale, the actual content is told in an incredible manner.

Every story node either features cutscenes that completely recreate the story as it was presented originally with the character models replacing the manga/anime models in a fashion that fits perfectly. This means a story node might begin with two cutscenes, allow the player to fight and complete a battle, and then enter another cutscene before being considered complete. This is then extended a bit by dialogue and still images from the anime portraying smaller events that aren’t highlighted through the aforementioned cutscenes. 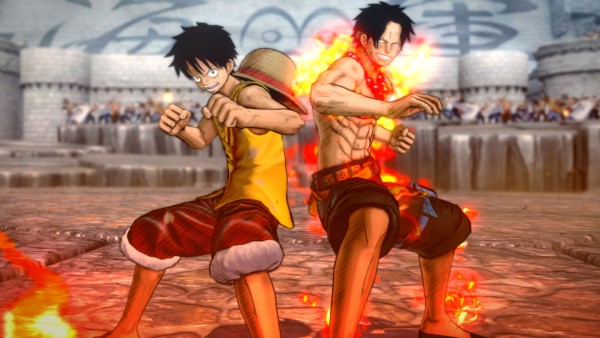 The intense focus on creating the emotional Marineford Arc shows as the quality is exceptional. Unfortunately this focus is also something of a downfall as the game provides barely any extra content outside of this arc. In fact, the only way players will gain any extra story knowledge of events before or after this arc (that just so happens to be exactly where the English dub of the anime is currently in the middle of), is from the small bits of character dialogue that occur when certain fighters are selected to either team up or fight one another.

This limited focus means that although there are fighters and support characters from all the way up to the conclusion of the Dressrosa arc that are given little context so those who aren’t completely caught up with the Japanese version of the series will find themselves lost regarding some of these characters.

When beginning the game the only option available from the start will be the Paramount War story mode. As previously discussed, this story mode follows the Marineford arc through a number of different perspectives with battles ranging from simply defeating your opponents or surviving an onslaught of attacks for a certain period of time. Certain battles will contain special conditions such as winning with a certain percentage of health left and completing these will unlock a bonus fight. 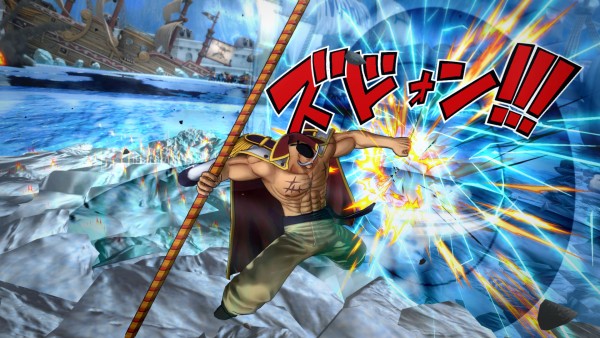 Each of the story stages range from being incredibly simplistic to incredibly difficult depending on what characters are being paired off against one another, though it is worth noting that bonus fights do have a much harder level of difficulty compared to the standard fights. This unfortunately means that players will find themselves occasionally butting up against a difficult fight with little recourse other than to continually attempt to win the fight or take advantage of a few exploitable mechanics to clear a level. Unfortunately even if you do get caught up in a difficult battle you can expect to clear this game’s story within four hours.

The combat in One Piece: Burning Blood appears far more complicated than it really is, at least for the most part, as it features a few standard mechanics such as a basic combo chain for every character that culminates in a flashy move that launches your opponent, three special attacks that are taken from the character’s repertoire of moves, a few unique attacks that can be combed together, a standard guard break, an easy to exploit heavy guard break, the ability to “Awaken” when the “Burning Gauge” is filled and then unleash a “Grand Impact” finishing move, and finally the Special button. Players can also make use of the aforementioned Burning Gauge to call in a partner for either a Unity Assist to break up an opponent’s combo, Unity Attack to swap and continue a combo, or Unity Clash to prevent their opponent from performing either of the former two and dealing a large amount of damage at the same time. 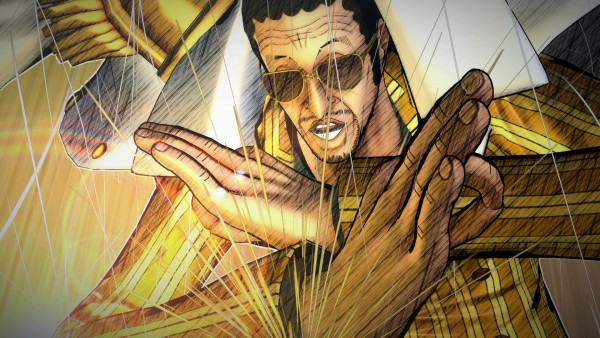 In One Piece: Burning Blood the focus of the game is combat and with a roster filled with Logia users that are otherwise incapable of being harmed, there are also many Haki users, including a few that possess Conqueror’s Haki, that are capable of damaging them. When using a Logia user, players can press the special button to cause normal attacks to pass through them, doing no damage to the user unless the opponent also activates their Haki ability. Thankfully this is balanced out through the use of a special gauge that, when depleted, means that the fighters cannot enter their special forms and the fact that even non Haki users can still activate their special and hit these opponents.

That being said, One Piece: Burning Blood is far from a balanced game. Although the title does make an effort to limit the way characters are balanced out by placing a price on each fighter,  with the best costing up to 3000 and the weaker ones only priced at 1000 and most modes only allowing 9000 in total, the moves of many of these fighters can easily sway a fight with little effort. With every battle outside the story mode allowing for players to bring up to three fighters and three support characters with them, there are a lot of combinations available to those who wish to delve into the roster but thanks to the aforementioned balance issues, many lesser characters will likely be passed over unless you decide to simply stick with your favorites. 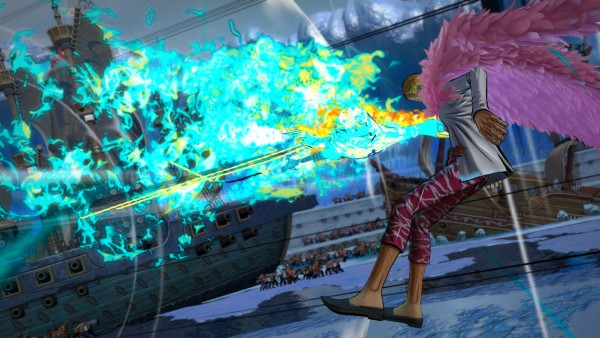 This is primarily due to the fact that battle and support characters that aren’t unlocked in the story mode must be purchased using Beli earned through fighting. The primary way to do this is to take on the other modes that are available in the game, the single player Wanted Versus that places players up against various Wanted posters featuring certain characters that must be defeated and reward the player with money, and fight online through the Pirate Flag Battle and standard online fights through ranked and player matches.

The standard online fights are about what would expect from a game like this and thankfully I can report that after taking part in a large number of battles I never noticed any form of slowdown, though attempting to find a player match can take a bit of time even at launch. As for the Pirate Flag Battle, players can select various factions that they wish to join and then fight for that faction over the course of a season, attempting to gain as much territory as possible in that time frame in order to help their faction win.

As mentioned before, the story in One Piece: Burning Blood has been taken directly from the manga and anime and recreated in executional form. With traditional cel-shading styles that fit the source material and characters appearing exactly as fans remember them, these fights can turn into completely ridiculous looking battles since many of the attacks these characters can unleash are extremely large and flashy and thankfully I never noticed any slowdown despite the amount of action going on at any given time. 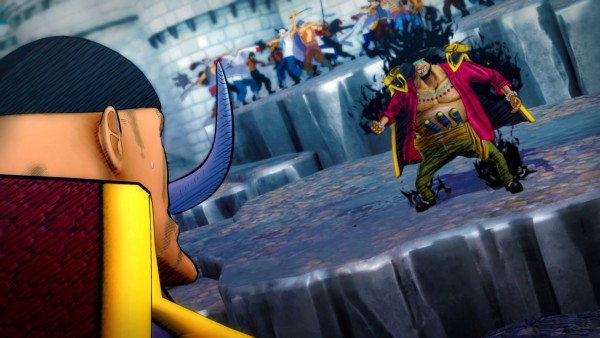 The stages in the game are rather large, to the point of almost being too large if you don’t account for the fact that certain fighters, such as Usopp, require a larger arena to be effective, and although there are only nine in total, these stages are taken from the Marineford arc and beyond to provide some variety. The voice work in the game is presented entirely in Japanese and thankfully all of the voice actors from the original cast continue to reprise their roles in the game and considering the large amount of voiced cutscenes in this game, this will be quite a boon for fans of the series.

One Piece: Burning Blood presents players with a massive roster of fighters to choose from and support characters to mix things up as well as a flashy combat system that appears complicated but is easy to learn once you grow comfortable with the mechanics. That being said, the limited focus of the story results in a short experience only padded with the Wanted posters and online fights to extend longevity and while the roster may be vast, the lack of balance in certain characters is quite evident.

As such, One Piece: Burning Blood is a great game for fans who want to witness the most memorable arc in the story once again but be prepared for a flawed experience that only truly shines thanks to its fiery fighting mechanics creating an experience that truly captures the chaos that many of these fighters can bring to a battle.
Capsule Computers review guidelines can be found here.