Story:
You’re an astronaut of some sort bouncing around on the moon, collecting gems and dodging asteroids, to get back to your rocket ship and escape… on every level. Okay, so there’s not much in the way of plot to this title, but if the game’s well done, who cares, right? 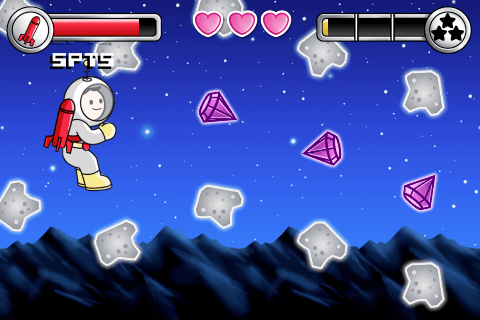 The first couple of levels are simple and do a good job of easing you into the general idea of the game. But once the third level hits, you’re straight into the deep end. This isn’t really down to the complexity of the level itself, but rather the flaws in the construction of the game become more apparent.

Gameplay:
The first couple of levels are simple and do a good job of easing you into the general idea of the game. But once the third level hits, you’re straight into the deep end. This isn’t really down to the complexity of the level itself, but rather the flaws in the construction of the game become more apparent. First off, everything’s huge. Your astronaut dude takes up almost half the screen, which leaves very little wiggle room for maneuvering around the asteroids. For this reason, the levels with even a hint of difficulty about them become almost impossible to complete. I think that’s pretty much the main issue, though it presents itself in a variety of ways… collision detection feels too sensitive, floatiness feels too floaty, that kind of thing. There is only one “area”, the moon, with a total of 30 levels.

Unfortunately due to the steep difficulty curve, I have been unable to make it past level 4. There is also a “Challenge Mode”, consisting of floating through one giant level, encountering aliens and picking up special power-ups along the way. But, again, the flaws of the gameplay make it very difficult to play through very far and not rage-quit your way out of the game altogether. The game also has an Achievements system, with goals ranging from the almost impossible “Get a 3-star rank on 5 missions” at the bottom end, to the harder-than-it-sounds “Spend 2 hours playing One Giant Leap” at the top end. All I could muster was a thousand gems from dying in Missions mode, and destroyed a UFO with it’s own laser from dying in the Challenge mode. There’s a “how to play” button explaining the basics of gameplay, and a static “more games” screen advertising other Asobu Games games, in case you’re interested. 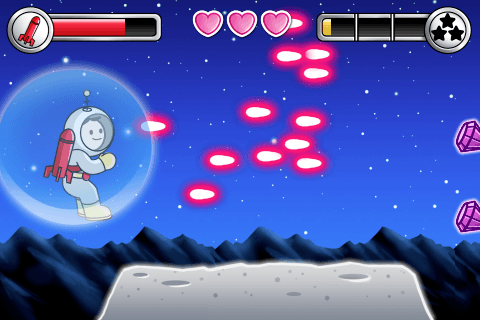 Audio & Visual:
On a positive note, the graphics, while simple, were pleasant enough, and fitted the premise well. Some of the subtler graphic elements, like the mountains in the background and laser beams were actually quite cool. It’s just a shame that things weren’t tightened up a bit more…

There are a few minor issues with the interface and menus, all of which can be overlooked if you like actually playing the game. Unfortunately, as the one flaw with the game kinda cripples it, you begin to notice the “almost finished” feel of some of the interface design. The audio was passable with the menu music featured some nicely-put-together 8-bit style beats, while the in-game music was decidedly subdued and quiet.

Overall:
I feel I have to put my hand up here and tell you I did not finish the game. I’ve tried (oh, how I’ve tried), but alas, I could not make it through all the 30 levels. In fact I almost couldn’t be bothered to finish the title simply due to the poor gameplay mechanics and the repetitive and boring gameplay that shouldn’t even be justified for an iPhone app, albeit a cheap one.