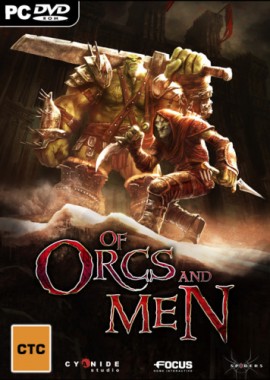 Overview
When I first saw the title I asked myself, “did the developers name a game with a prepositional phrase?” Yet somehow the word “of” makes the title pop out and provides an unique identity for the game. Not only does it grabs the consumer’s attention right away, but it also presents a story of unison and/or conflict.

After seeing the first released screenshots, I knew that this title should be an amazing adventure. And given the constant bickering between characters in the preview trailers, I knew I was in for a ride. Will Of Orcs and Men generate the hype I was longing for? Let’s take a look.

Story
In a land dominated by humans with enslaved orcs, only a few tribes remain untouched by human raids. One such clan is that of the fearless Bloodjaws. This honor bound clan prides itself on completing any task and defeating forces with no quarter. Making himself at home with his brethren is one of our protagonists, Arkail. Known as “The Butcher” for his actions during a raid in his previous clan encampment, many stay away from this fearsome orc. That is until our goblin protagonist – Styx – was paid to assist Arkail in his journey. Could you believe when Styx found out that Arkail was a Bloodjaw he started mumbling curses?

Companionship in Of Orcs and Men can be best described as a love/hate relationship with more emphasis on hate. At times Arkail can appreciate some of Styx’s assassin expertise; however, the orc tends to view Styx’s sneaking around as a cowardly action. Styx makes the point that his ways have kept him alive for many years which could make him Arkail’s grandfather. Never tell a prideful orc you could be his grandfather because it will end badly. Kind of like how this guy said something wrong… 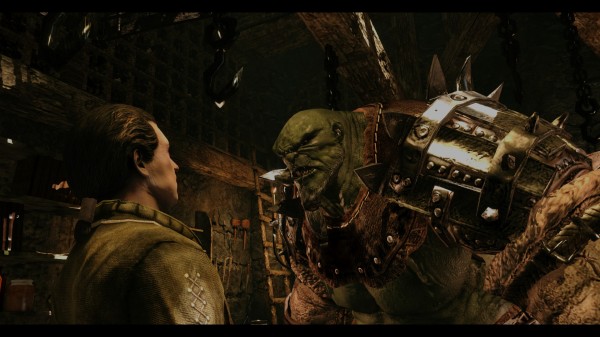 As each character’s story builds, we come to find many betrayals even between friends. But in the end they pull through to see towards their ultimate goal no matter the price of gold. *points finger at the goblin* The story pulls on your orcish heartstrings and reminds you that not all greenskins are foul creatures.

Gameplay
My first impression might have had a drastic change on the overall rating considering the gameplay. As soon as I gained control of Arkail in the first act, I became furious with the lack of “active” controls during combat. Now I need to explain myself. During combat you have actions, from a list of skills, that can be set in a sequence of events near your health bar. At the instant of assigning an action/task for Arkail or Styx, you no longer have freedom of movement with that character until all actions have been completed or cancelled.

In defense of Spiders and Cyanide Studios, they provided a slow motion function for players to access their skill trees to assign battle tactics. Let’s say Styx is making an automated normal attack. By pressing the down on the spacebar, you will be able to assign the next task while he is swinging his daggers. The slow motion can help by changing tactics from offensive to defensive or to even cancel an automated attack which can be done with the right-click mouse button. 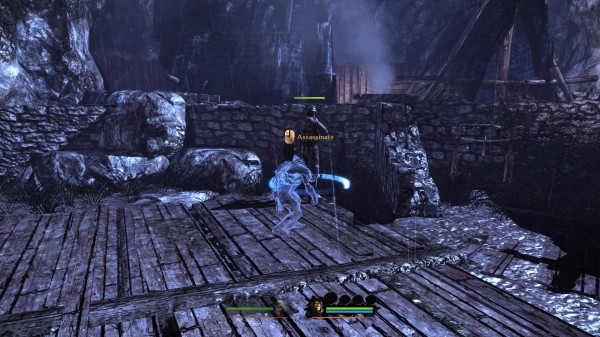 As the game progressed I noticed a change in my demeanor when jumping into battles. No longer did I want to have active movement with hack-n-slash because I was in control of two players that required strategy to finish off foes – or dumb luck. Most seemingly intense battles can be dialed down a couple notches by delivering assassinations by our good fellow Styx. And when too many foes entered the fray, I decided to build up my stun moves with Styx and let Arkail do the dirty work of making enemies bleed to death. Needless to say Arkail fainted more than a few times in this process, but Styx was right in his proclamation of running and surviving.

Side quests make the title far more interesting by creating sub-plots and retrieving valuable loot. One such side quest offers you the chance to find your fellow Bloodjaw in the depths of “The Bowels” guarded by a crazed orc shaman. While the orc shaman may have been correct about the spirits calling out for “Mother Earth”, his methods were fanatical and included the torture of fellow orcs. Needless to say, you get to kill more than just humans. Extra loot can be picked up in side quests as well, and there is no shortage of uniquely designed weapons. Some weapons apply a high increase to damage and others give buffs to attributes with lower damage output. And some weapons just plainly look kick-ass.

Speaking of weapons, you are able to buy, sell, and upgrade them with the currency of Trade points. You may collect these points throughout your travels by looting glowing chests or bags and by selling off your equipment to a smith. As you pick up more weapons, upgrading them will determine which ones have higher damage outputs. However, items can only be upgraded once to meet maximum potential. The only negative side of using Trade points to upgrade weaponry and armor is that you cannot see the results before upgrading. When accessorizing you can see the difference between old and new, but upgrades will keep you guessing until you have performed the deed. 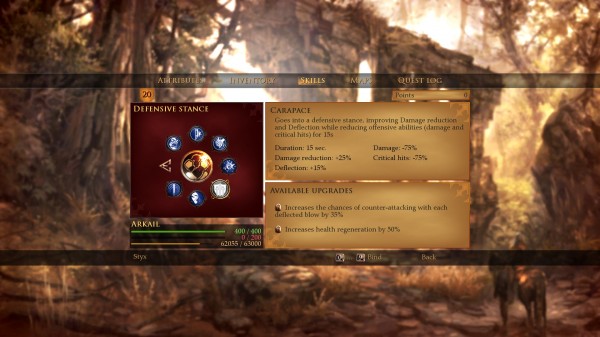 Leveling up plays a huge factor in the game. At first, players are limited to what skills they can use. By gaining experience through killing foes, Styx and Arkail can level up attain new skills and eventually upgrade the ones they have. For instance, Arkail’s Carapace ability can be upgraded to (1) increase the chances of counter-attacking deflected blows by 35% or (2) increase health regeneration by 50% when active. Thus, you could really have diverse character considering I did not even put points into this ability. Attributes are another contributing factor as they can be raised or lowered by the equipment you use as well as increased each time you level. One point is freely allocated for each raised level, so use the point wisely towards the type of build you want your character to play.

Visual
Environments are astounding and provide inescapable moments for players to truly experience a different world. The Island of Laments captured my eyes the most by presenting a summery autumn. Leaves are changing colors giving off a wide assortment of shades to the trees. Some leaves are even falling away from the trees to emanate an extra amount of realism. 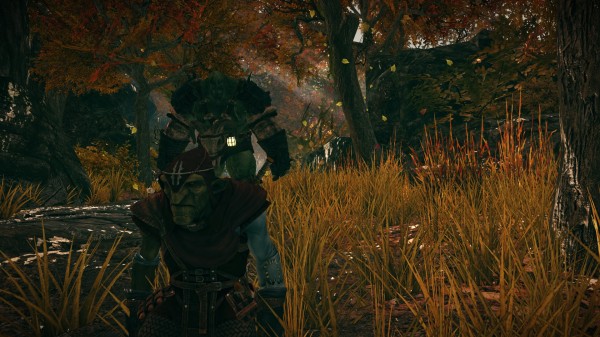 One complaint that I have with the visuals has to do with the arrangement of the chosen weapon on Arkail’s back. While not yielding the weapon, you can notice a sizable gap between weapon and wielder. The does not adversely affect gameplay at all, but when noticeable it can be distracting.

Cut-scenes plague Of Orcs and Men like a virus. However, this virus is a friendly one that can be appreciated by a proper crowd. Throughout the entirety of the game, cut-scenes are detailing the story further and allowing you to piece together information about Arkail’s bloodthirsty history and Styx’s questionable goblin heritage. Therefore, if the cut-scenes are overbearing just skip them. Otherwise go grab some popcorn and enjoy the show. 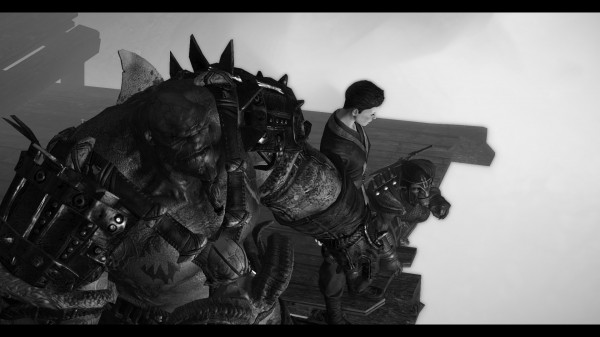 As your character changes with clothing and weapons, the same happens within cut-scenes. I don’t know how big of deal this comes across some gamers, but I truly appreciate the time put in to character customization throughout the course of the game. Of Orcs and Men impressed me on this front as I enjoyed seeing a bloody serrated edge and a bulging skull harness carried through each enacted scene.

Audio
Character content is surprisingly strong with the inclusion of profanities and volatile language. More often than not this use of language can give a game a poor flavor and downgrade the overall potential. This is not the case with Of Orcs and Men because you can expect more focused aggression from a being that has lost his tribe or is being used against his will.

Volatile language can be humorous, but the timing of vocal animations and voice inflections is a serious matter. Thankfully, the developers took their time to do a decent job matching up the animations with NPC’s and our protagonists to give an enjoyable experience. Seeing a poorly animated cut-scene is distracting and lowers game quality.

Overall
Role playing adventurers should have a feast with Of Orcs and Men. There is a strong sense of story portrayed throughout the title which uses many cut-scenes to build player knowledge and suspense. With plenty of side-quests, players can enjoy a deepening storyline that encompasses more than a struggling orc nation trying to survive. While at first the gameplay can see restrictive, the objective turns to a strategy based title that will have you planning the sequence of each battle. 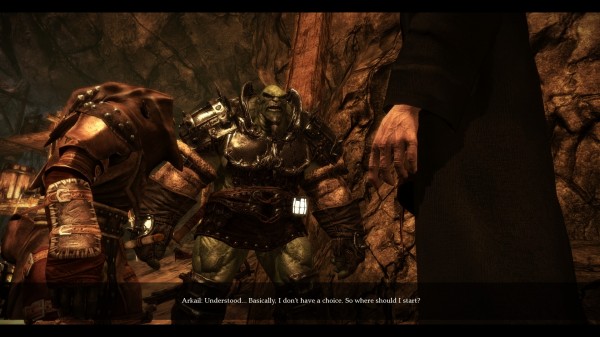 I also believe there are some aspects that players may not enjoy. The cut-scenes may turn you off from the game because it may seem like you are watching a movie at times. The storyline may be strong, but it is completely linear with character choices rarely affecting the path of the story. And those looking for a hack-n-slash title will have to look elsewhere.

Diving into the role of Arkail and Styx was quite the adventure. For those that want to experience an honorable side of an orc and goblin while turning the tide on an oppressive human empire, this game was meant for you.