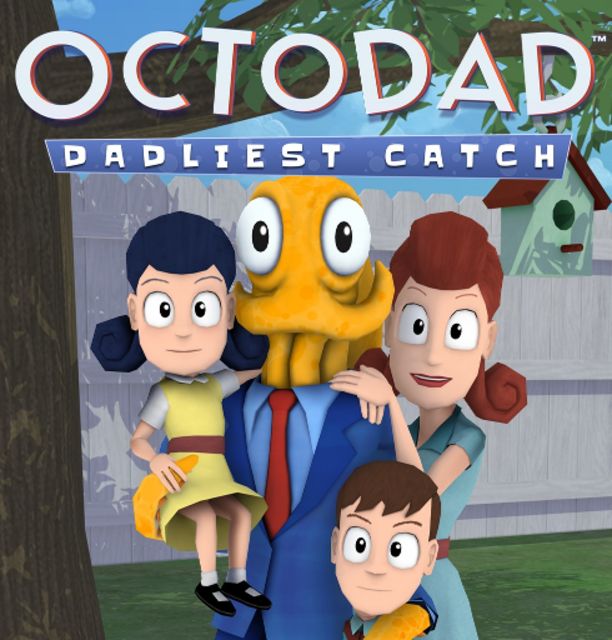 Overview
Being a parent is hard (I assume). As if it wasn’t enough of a chore to make sure you make it through life, parenthood places yet another life (or lives) in your hands. Scary. Now compound this with the added difficulty of, oh I don’t know, not having any bones. Well my friends, therein lies Octodad. With little more than a stylish suit, this ambitious cephalopod has built quite the little life for himself. But with the inherent difficulty that arises from being an octopus on land, how long can our fatherly protagonist keep up this charade? 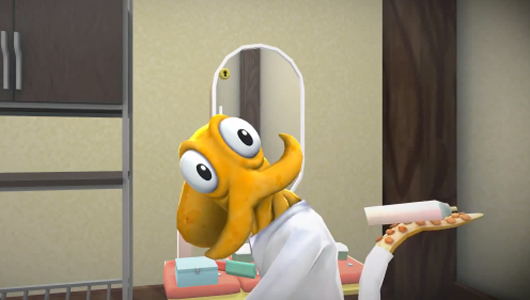 Story
As the sequel to Octodad, Daliest Catch continues on with the daily life of everybody’s favourite eight limbed father. This time around however, we are treated to a few more definitive moments in the lives of Octodad and his family. For example: his wedding. These moments, whilst just as bizarre as ever, serve to paint a more complete picture of this bizarre sea creature and his dream to live a normal 1950s style life with his family…it’s more endearing than it sounds.

When not reliving crucial moments of his life, Octodad is just living an average life. Getting milk for his daughter’s breakfast, mowing the lawn, grillin’ up a mean burger…escaping the relentless assaults of an enraged chef with fish-centric post traumatic stress disorder. You know, the usual…fine, I’ll explain. Having discovered that Octodad is less human than he pretends to be, Chef Fujimoto believes that this is merely the beginning of the sea’s invasion of land. Resolving to reveal his trickery to Octodad’s beloved family, Fujimoto pursues our hero through every facet of his “mundane” life. Though, to his credit, Octodad shrugs most of these attacks off. He’s pretty awesome for a “regular” guy. 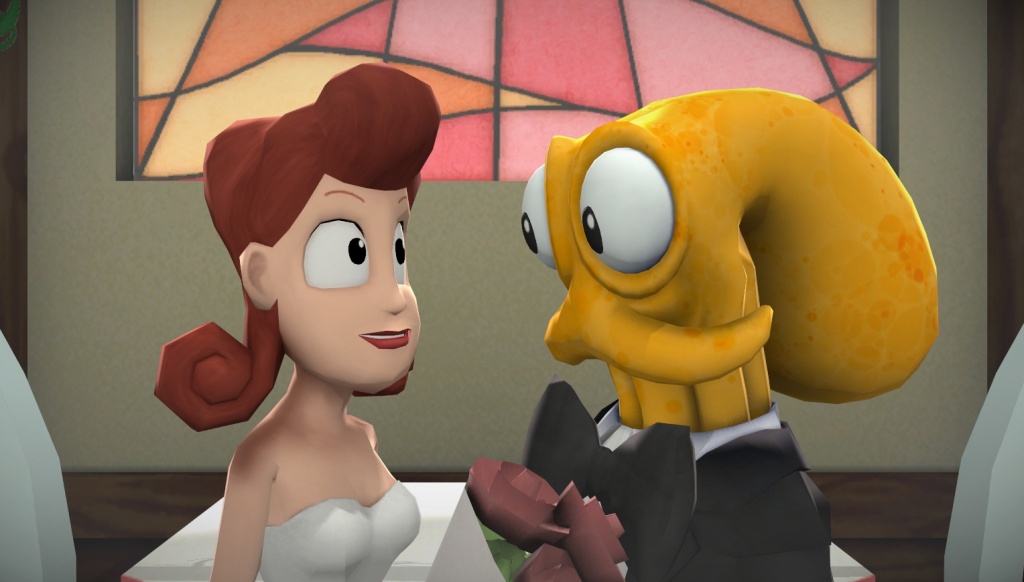 I know love is blind…but come on Scarlet

Gameplay
Unique. Very, very unique. In fact, it’s the main reason that a game centred around household chores and relatively mundane family outings is so fun. For those of you unaware of how Octodad plays it’s quite simple. As an octopus, the titular parent has a distinct lack of bones in his limbs. Of course, this renders even the mildest of physical activities somewhat complicated. In a single player run, you have control over all four (eight if you want to be technical) of Octodad’s limbs. The difficulty arises from the fact that you must cleverly alternate between controlling both arms and legs in order to progress through a level. Even opening a door can become an ordeal when you accidentally step when you want to grab, causing you to violently lurch away from you objective. That being said, watching the hapless father flail when walking brings unnecessarily large amounts of joy to the screen…for me at least.

As you progress further through the game, your skill will truly be tested as Octodad is thrown into more and more ludicrous situations. Some of these scenarios require you to not only reign in his frantic limbs, but also correctly utilise specific tools. I don’t think I’ve ever struggled so much with plugging in a power chord before…poor Octodad. If that wasn’t hard enough, the Normal and Hard difficulties come with a Suspicion Meter. Being that no-one has seen through his ingenious disguise, Octodad must continue to act in a manner befitting a father of two. Should he cause to much chaos in a level, the gauge will fill and you will be thrown back to the last checkpoint. So if you’re feeling particularly destructive (or you just can’t control the bevy of limbs) pop on down to Easy, where suspicion is an alien concept. It’s kind of liberating.

However, there is one area where Octodad truly stands above all other games. A concept as hilarious as it is frustrating. I speak of course of Co-op Mode. In this terrific addition to the game, players may band together with their friends and live out Octodad’s day together. Of course, since there is only one Octodad, it is not Co-op in the traditional sense. Instead, players are assigned limbs…it’s not hard to see how this will turn out. Though markedly easier when left to your own devices, the game becomes exponentially more fun when you’re forced to work together with other. But it would be a good idea to play this with people who you have a solid relationship with…I’m not sure if budding friendships could survive the onslaught of yelling that will without doubt arise. As if gameplay wasn’t bizarre enough, being given only partial control of a single body is a truly unique experience. Wherein you will learn the true meaning of cooperation…or frustration. Honestly, it could go either way. 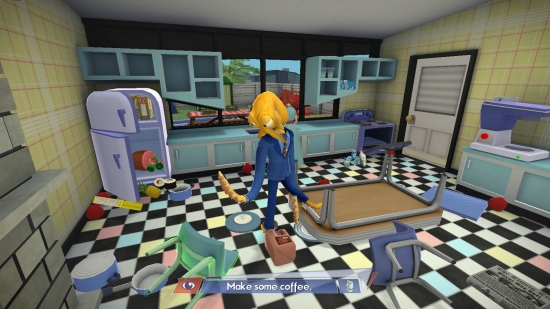 It’s harder than it sounds…

Visuals
If the whole premise and playstyle of the game didn’t give it away, Octodad possesses a unique style, one that is carried through its visuals. In order to prevent an octopus in human clothing from becoming frightening to look at, the game utilises a cartoon-like style. In addition to the vibrant colours used, the game presents itself with a simple, clean look that allows you to focus on whatever is most important at any given time. Though the times when Octodad isn’t the sole focus are admittedly few and far between. Though “simple” isn’t often a term of endearment for most games, the visual style of Octodad truly benefits the game as a whole. If it were any different, I believe the game would lose some of its charm.

That being said, you may often find yourself completely oblivious to certain background visuals as your attention is focused solely on the flailing body before you. Seriously, it can become a bit distracting when you (or your co-op partner) causes Octodad to perform a rapid 720 degree spin because of a control slip up. Or when he goes flying because of precariously placed banana peels. Or goes careening over a freshly mopped floor. Seriously, anything not nailed down is in danger of joining these amazing displays of self control…and it’s hilarious. 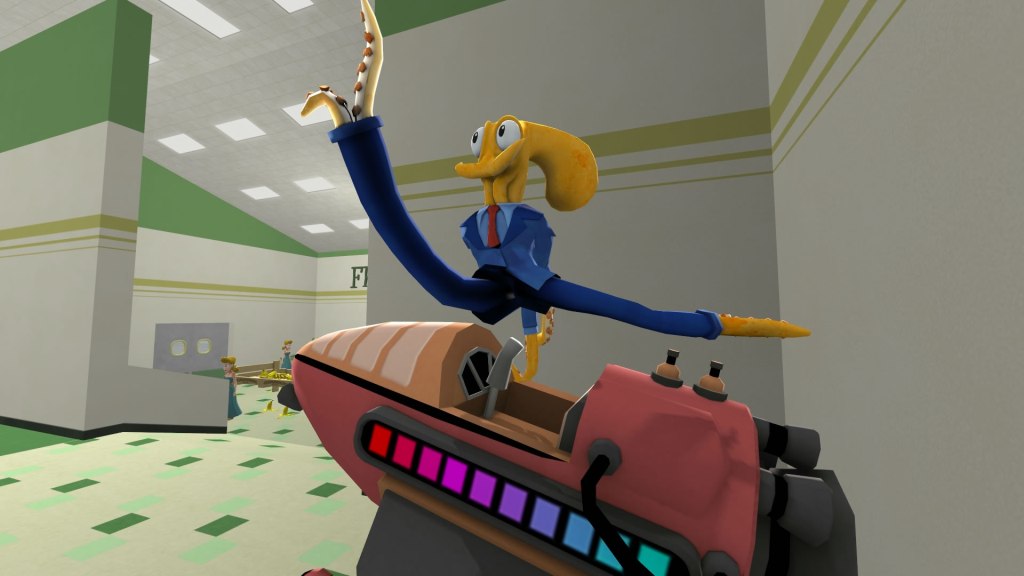 Nothing to see here…

Audio
Surprisingly memorable. I mean no offence to Octodad, but most games that relish in a ridiculous premise kind of let the ball drop in certain aspects. They’ve already got your attention after all. As it stands, Octodad’s soundtrack is upbeat, fun and truly suits the feeling the game wishes to convey. Take for example the game’s theme song: Octodad (Nobody Suspects a Thing). As you tumble through the opening credits, be sure to listen to the lyrics being sung, they’re both informative and funny. Also it’s oddly fitting that a character such as Octodad would have his own theme song. In the game proper,  there’s one mission in particular towards the end where the soundtrack really comes into its own, serving to amplify the drama of said mission. Yet, somehow, at the same time retaining the game’s usual cheer, melding together to create a sense of wonder. It was quite amazing.

In addition to music, dialogue also plays a part in creating the world of Octodad, despite the fact that Octodad himself cannot speak…on account of being an Octopus. That being said, the game utilises this lack of eloquence in order to draw even more humour from the game’s premise. Despite “speaking” in nothing but blubs and gurgles, Octodad is completely understood by every human. Of course this leads to situations where characters respond specifically to statements that we only receive the gist of. But, to be honest, you don’t need much more than that. The plot isn’t exactly filled with intricacy. Insanity on the other hand… 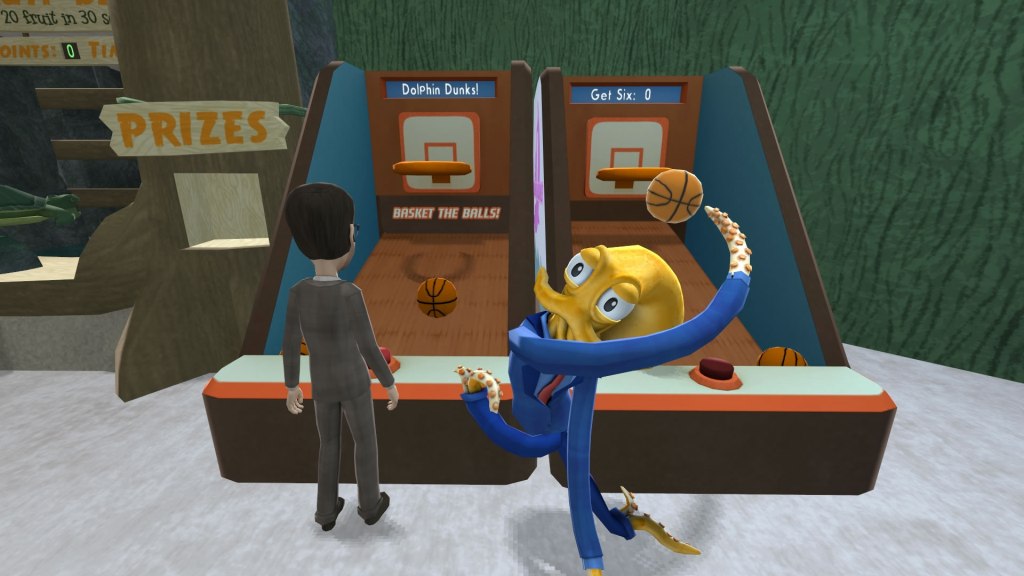 Overall
Octodad: Dadliest Catch is a unique experience…though by this point I’m sure you already know that. Heck, the title should be enough to raise some eyebrows. Just so we’re clear: you play as an octopus pretending to be a suburban father. Seriously, that statement alone is enough to decide whether or not you’ll play this game. Delving a little deeper, Octodad also provides a rather bizarre gameplay style. After all, most control comes from the analog sticks, it’s kind of strange not having to use more than a single button when playing. There also aren’t too many games out there that combine stealth elements with utter chaos, namely because it wouldn’t work anywhere else.  Where else but in a world of humour could anybody slip on 15 banana peels, trash an entire food display, travel through ventilations ducts, openly commit theft and throw everything not nailed down and only be considered slightly suspicious? It’s no wonder Octodad’s managed to lead such a regular life. Though I’m still not sure how he has two human children. That one raises some questions…