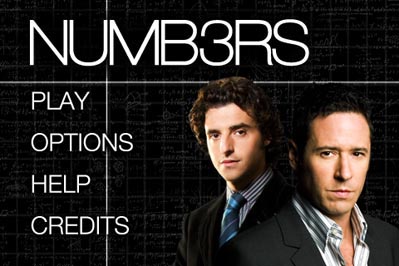 “Everything is numbers.” That’s right, according to the Numb3rs game on iPhone, based on  the TV series of the same name, the thing of utmost importance, that you must remember at all costs, is that everything is numbers. Numbers? Yeah, that makes sense, they’re numbers. Pictures? From now on they are numbers. What about letters? Nope, they are also numbers.

But dramatic sentiments and joking aside, Numb3rs isn’t really very much linked to the television series at all, and for that I am thankful. Maybe the developers hoped the license would help shift a few copies, when in fact, it may well act as a deterrent. This is a shame as it is actually a brilliant number game.

From a choice of two modes, story and challenge, you play a number or different sub-games with the one that’s played the most being brain-based. Now for some of you this may be a complete turn-off, but those who like this kind of thing (me being one of them), are in luck. The main element of the logic-based game is one number game in particular. This mini-game makes up the core of the game purely because it appears the most, and can only be described as a maths-based missile command game, replacing precision aiming with speedy mental arithmetic. Imagine Dr. Kawashima, but if you don’t complete the calculations quick enough, instead of a drop in your personal chart, there are rather more catastrophic consequences. Let’s say a hacker managing to breach his/her way into your top secret database. 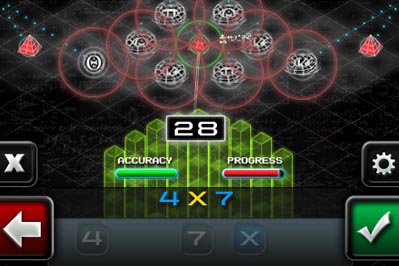 This prospect may not sound thrilling, and initially it’s not, but believe me, when you start to progress through the missions it gets better. From there, if you start upping the difficulty settings it can turn very exciting as you struggle to complete sums in time, or manage to perform a combo and eliminate multiple threats at the same time. The faster and more complicated it gets, the more thrilling it gets.

But this isn’t the only aspect to the game. There is also a range of other mini-games that make up the game, such as a colour sequence memory game, in which you have to memorise the sequence as it grows longer and as a result, harder.  A number of you may have even experienced this before as a flash game over the internet, so really this is nothing new, yet extremely fulfilling to play. The aid of a different sound for each panel adds to the satisfaction from completing a sequence, and can even help you to memorise the order if this is the way your mind works.

However, not all the mini-games are quite up to these high standards, and as you progress in the story, the quality of these bonuses declines. Fortunately, as aforementioned, the speed calculation number-defence game plays the leading role in the game, making up the majority of the playtime. You can rest assured in the fact that you will only encounter each mini-game once, as they only appear as a single one-off at select intervals. Therefore, if you didn’t enjoy repeatedly tapping the screen in some of the various mini-games, there is no need for these to get another look-in as soon as you have completed them, if you so wish. 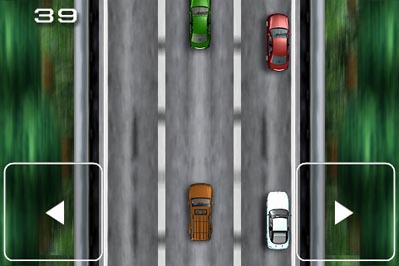 On top of the story mode, there is a challenge mode which gives more of the same number-crunching action like in the story mode, this time omitting the mini-games which break-down the story. Those who didn’t fall in love with the slightly random mini-games may favour this mode, preferring to chase high-scores than resolve the dire plot. In addition, scores set in this mode can then be compared with the scores of others on the leader board, an added incentive to strive for a large score.

Overall, Numb3rs is a pleasant surprise and while some may feel discouraged by the fact the they don’t watch the show, in reality it has next to nothing to do with the series. It can and should be enjoyed by anyone with a basic mental mathematics ability thanks to an addictive calculation-based defence game that makes up the bulk of the gameplay. As the game progresses, the difficulty surges which could leave slower players behind, whereas other players who breeze through have the added challenge of increasing the difficulty to confront. Some of the mini-games are good, some aren’t so good, but either way, they serve as a great stop-gap from the main gameplay element, preventing it from becoming repetitive. Both the sound and graphics are passable, and while the plot is mediocre, the short lines of speech before and after each mission are unobtrusive with little affect on the game, and require no knowledge of the characters’ backgrounds, either. It’s just a shame the game is so concise, with the story mode done and dusted in little over an hour.