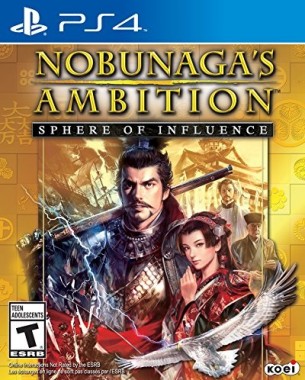 Overview
There are some games that wouldn’t have stood a chance in America without a little faith from the publisher. Luckily, Nobunaga’s Ambition: Sphere of Influence has launched on the Playstation 4 because of Koei Tecmo, and brings with it everything fans love about the franchise. Originally released on the Playstation 3 over a year ago in Japan, this strategy sim has made its mark already and brings back the addicting gameplay players love to a new generation of platforms. Like most imports however, it comes with its own set of rules that may or may not scare away new players. How does this Ambition play out? 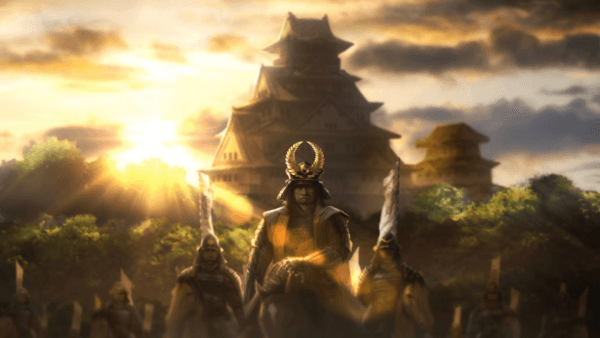 Story
I want to start by saying that no matter which genre of a Nobunaga title you are playing, the story always feels linked to Koei’s other big hits such as Dynasty Warriors and of course the Romance of the Three Kingdoms, as it follows one young hero who is attempting to unite a 16th century Japan. While the story isn’t really riveting or even that meaningful, it does offer Koei’s usual in-depth history lesson, giving players a taste of the times through a good amount of dialogue through the text driven cutscenes. There is also a bit of humor mixed in, but without animation or much expression – its best to use your imagination to get more out of the narrative than a lesson in culture. I suppose if this was my first taste of the series I would have been more enthralled, but there isn’t a ton that sets this title apart from its predecessors other than minor differences and the exact dialogue spoken, but still enjoyable enough to keep you going as you build and unite an empire. 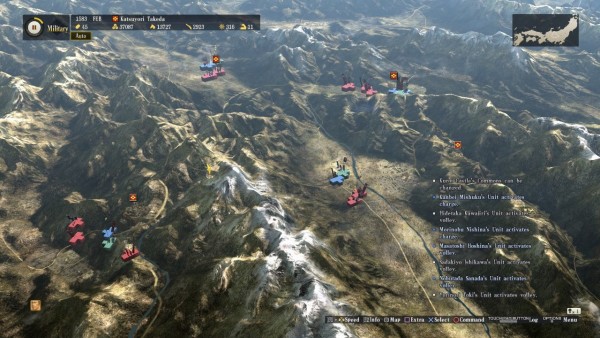 Gameplay
Say you see Nobunaga’s Ambition: Sphere of Influence sitting on the shelf. The cover alone doesn’t show us much as the game relies on its namesake and loyal fans to push numbers. Those who do take the plunge however need to know that they are in for a treat if they can manage to grasp it all. It has been a good while since I have played Nobunaga’s Ambition in any form, so the tutorial, while lengthy – was very needed. This little learning tool drags a ton but teaches the player all of the basics. How to manage crops, earn labor, gold, and everything else to keep your community growing. The heavy amount of icons and text on the rather bland looking map do not do newcomers or even returning players much assistance unless they have a full understanding from this tutorial, but once you get the game – the addiction truly begins. 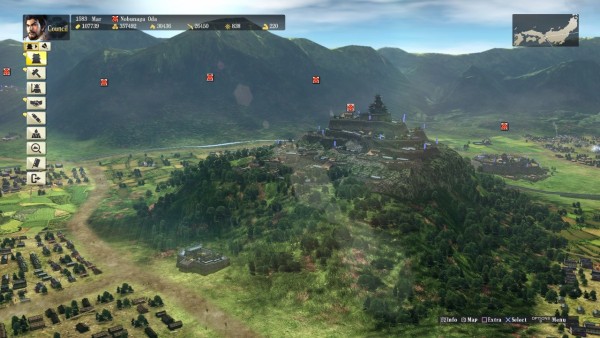 Players are provided a very small territory at first and have very few resources. The main resource to worry about is your labor, which allows men to perform tasks such as building, working on diplomacy to gain truce, planting crops to keep your people alive, and simply waiting for each task to be completed by your clan. As you progress, you will be able to build an army and slowly take over smaller territories or persuade ally troops to join you for land domination, which keeps the game interesting due to the little animations that occur on the map to signal a change in the environment. I understand, that isn’t a very detailed way of putting it, but this is a very detailed game and one that could take just as long as the tutorial to explain in this text I am typing. To be honest, I was so clueless during my first hour I grew frustrated. Then, like a puzzle everything came together like an interlinking web. 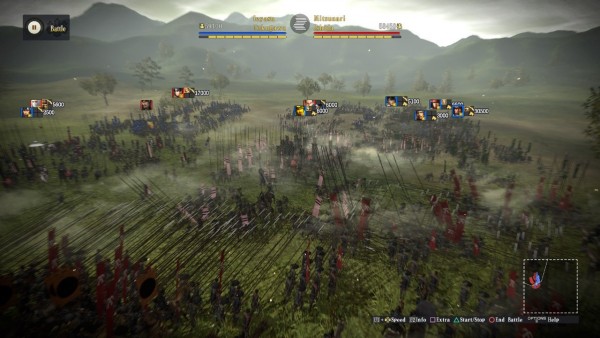 The more territories you claim, the more land you possess which can make you a target as you grow near enemy villages. This means that you must use strategy to survive. Do you rush the enemy with full force, attempt democracy for a peaceful takeover, or retreat for a bit to build up more of a structured army? Generals each have a large variety of techniques that can greatly assist on the battlefield, which keeps things from getting too tedious overall. Between the somewhat decent AI and these abilities, that is about the only variation players can expect other than watching a population grow. I know, its a strategy game and that is the point, but without a lot of flash and sizzle that we have seen in similar products, things can get boring after hours on end and even easy – dare I say it. I found myself using the same tactics over and over and even playing with my phone almost as much as I was playing the game itself while waiting for actions to occur. Thankfully time can be sped up and combat happens in real-time, but as I said – getting the rewards of a victory take time and the inpatient probably will give quickly in this deep – yet somewhat unfulfilling experience.

Don’t get me wrong, I had a lot of fun with Sphere of Influence. I sunk a hefty amount of hours into the product here and mostly enjoyed it. Those who want the charms of something more simplistic like Civilization Revolution however are going to realize quickly that this is a very mature title that expects the same back from its players. Its a game where you have to learn, think, and use strategy to expand -and while it does get simple after a while, just knowing that you conquered one campaign can make you feel fantastic. I do wish there were other maps, but this is a game about one region and not multiple locations. Its just large enough to go back again, but small enough to take a good break in-between sessions to avoid more tedious actions.

Visuals
Visually, Nobunaga’s Ambition: Sphere of Influence looks great. I mean it isn’t going to test the power of your Playstation 4 and probably would not have even very powerful on a Playstation 3, but the colors make up for the lack of design, and most will be so interested in simply thinking about what to next that they will not be worried about the subtle sprites and map features. You can get a closer look at almost anytime by zooming in a good bit, and there is some nicely built structures to look at that give the player a closer view of how their clans are growing as the landscape starts to evolve. The text however could use a bit of a boost as I had to move close to see many of my options as the beige colors with white text seemed to clash and make it hard to read from a distance. 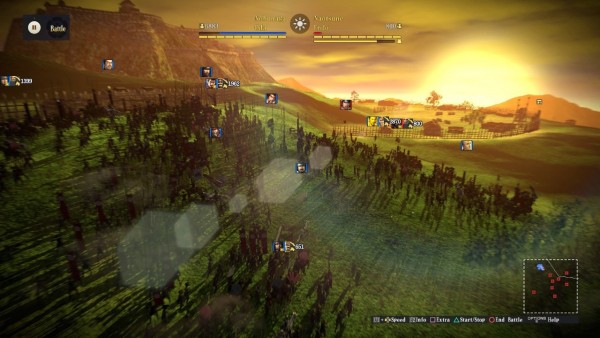 Audio
The music, well – its generic, but nothing bothersome. This is a title you are going to spend hours on end playing so I suppose that is a positive for this title. The tempo and current track always represent your current status as well. For instance, while you are simply at peace, assigning tasks and so on you will hear a light tune that is rather pleasant. Combat brings the beat to more intense rhythm, allowing for better immersion overall.

Overall
Nobunaga’s Ambition: Sphere of Influence is a great addition to the genre but one that has a strict learning curve. Once you get past learning the basics, this may in fact be your new addition as the tedious yet satisfying gameplay can be a joy as you grow an empire. Consider this game as micromanagement 101, where you are not really able to go in and conquer, but instead have to learn, memorize, and strategize in order to gain ground. Sphere of Influences strongest trait is its complex nature, while its weakest is to keep the player’s attention after mastering the game itself. That being said, you can’t really go wrong with the rich and habit-forming gameplay that Koei has delivered in this package.