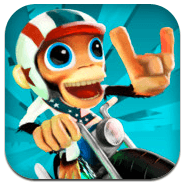 Since the incredible success of last year’s Temple Run, mobile devices have been filled with generic endless runner genere titles hoping to cash in on the craze with little to no ambition or creativity. However Nitro Chimp from Chillingo breaks the trend, with a different take on the genre, inspired by titles such as Joe Danger and Excite Bike. Nitro Chimp is an casual title packed with style and fun that can be enjoyed by people of all ages. 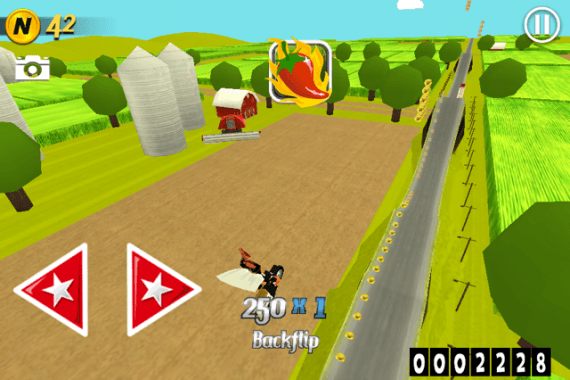 Nitro Chimp puts players behind the wheel of a motorcycle as a chimp in an epic race against a coin-stealing opponent. The catch is the race is filled with deadly obstacles and the race doesn’t end, ever. Those familiar with endless runner titles should feel right at home with the controls. You can play either by titling your device or using on screen buttons to avoid obstacles and collect coins, and you can press the screen to jump as well. There is only one level, which goes on endlessly, By saving up coins you can buy power ups, costumes and upgrades…you know the drill! The biggest standout feature that separates is the focus on preforming tricks to rack up extra points. This adds a new element to the gameplay, as players are encouraged to take risks – if they succeed they rack up more points, but if they fail it’s game over.

You could just play it safe and just dodge obstacles and try and get as far as possible, but then you’d miss out on a lot of points. Also, with an opposing chimp stealing all the coins, it’s in the player’s best interest to try and stay ahead to get more coins. It’s a unique and fun twist that adds an extra layer of depth to the genre which can be really refreshing. With a camera button that works in the same fashion as the much loved one from Super Smash Bros, objectives, Facebook & Twitter integration and the ability to make in-game purchases for more coins, Nitro Chimp has it all! With that being said however, Nitro Chimp can be a little repetitive and simple for some but hey it’s a casual title, what’d you expect? 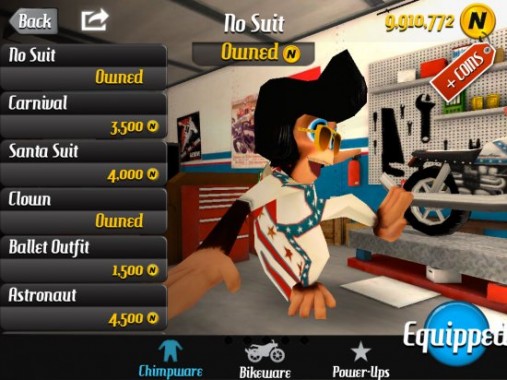 Nitro Chimp is filled with eye candy with it’s adorable character design and it’s range of outfits. While textures may be basic, they get the job done with vibrant colours that capture the atmosphere with cartoonish charm. The soundtrack is a beautiful highlight, filled with a high-energy rock soundtrack. In fact, the developers thought this so much that the entire 11-track OST is available on iTunes, which you can get here! If that isn’t enough for you, check out the track Chains of Gold here! 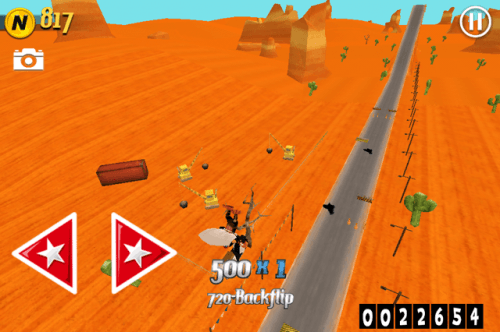 Nitro Chimp is a refreshing take on a familiar style of play. While there isn’t much new stuff to bring to the table, it clearly stands out. It looks great, sounds great, easy to play and is addictive enough to fall in love with, but it’s not going to be for everyone. Nitro Chimp does tick all the boxes in making a good iOS title, but that’s about it. While it is charming, creative and fun, it also gets repetitive and does a lot of things we’ve all seen before. For only 99 cents but, it’s worth picking up if your a casual gamer and love the endless runner genere as it is a nice twist on things, but really that’s about it. But I’m sure for many it is a must buy – I mean, come on, It’s a chimp on a motorbike that’s freaking cool! 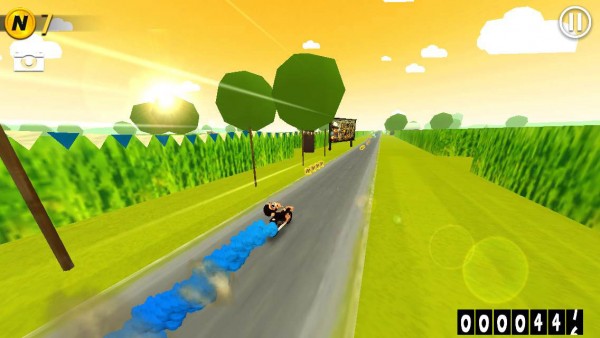