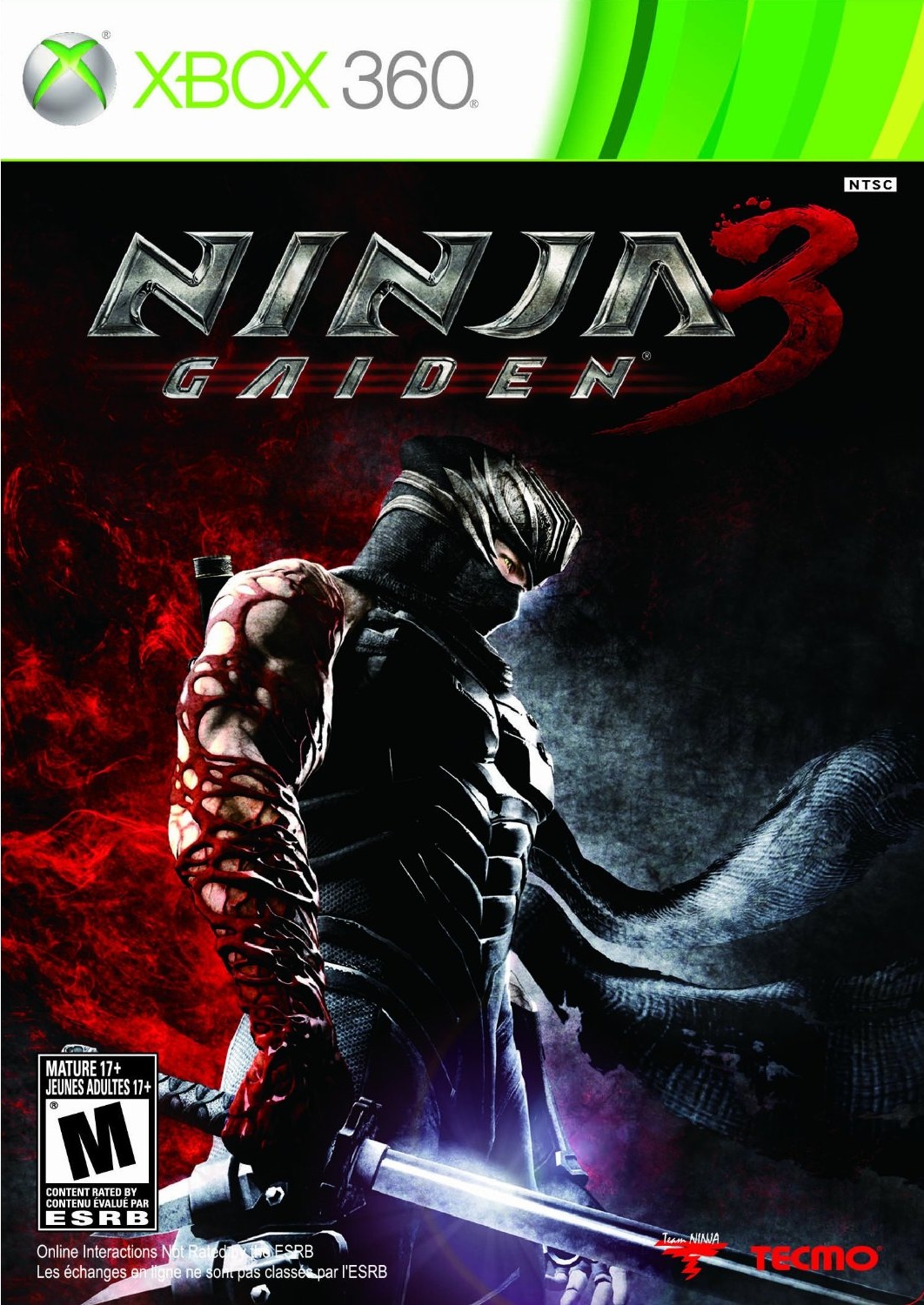 Overview:
Ever since Ninja Gaiden was released on the original Xbox it has been known as a series that offers not only plenty of action but also a very brutal level of difficulty and even more brutal swordplay. This stayed true in the sequel and the various remakes it has seen over the years.

Under the multiple re-releases of previous games fans were eager to see where Ryu Hayabusa would go next and Tecmo Koei has delivered that story in the form of Ninja Gaiden 3. However there have been more than a few changes to the formula many of us know and love. The question is however, do these adjustments make for an even better game or will they leave a bloody stain in our memories?

Story:
Nearly any gamer who has played a Ninja Gaiden game before should know that Ryu Hayabusa has killed a lot of people… in fact he’s probably killed enough people to equal the population of a small country over the years and in Ninja Gaiden 3 we are presented a story that tries to humanize this previously unfaltering killing machine. 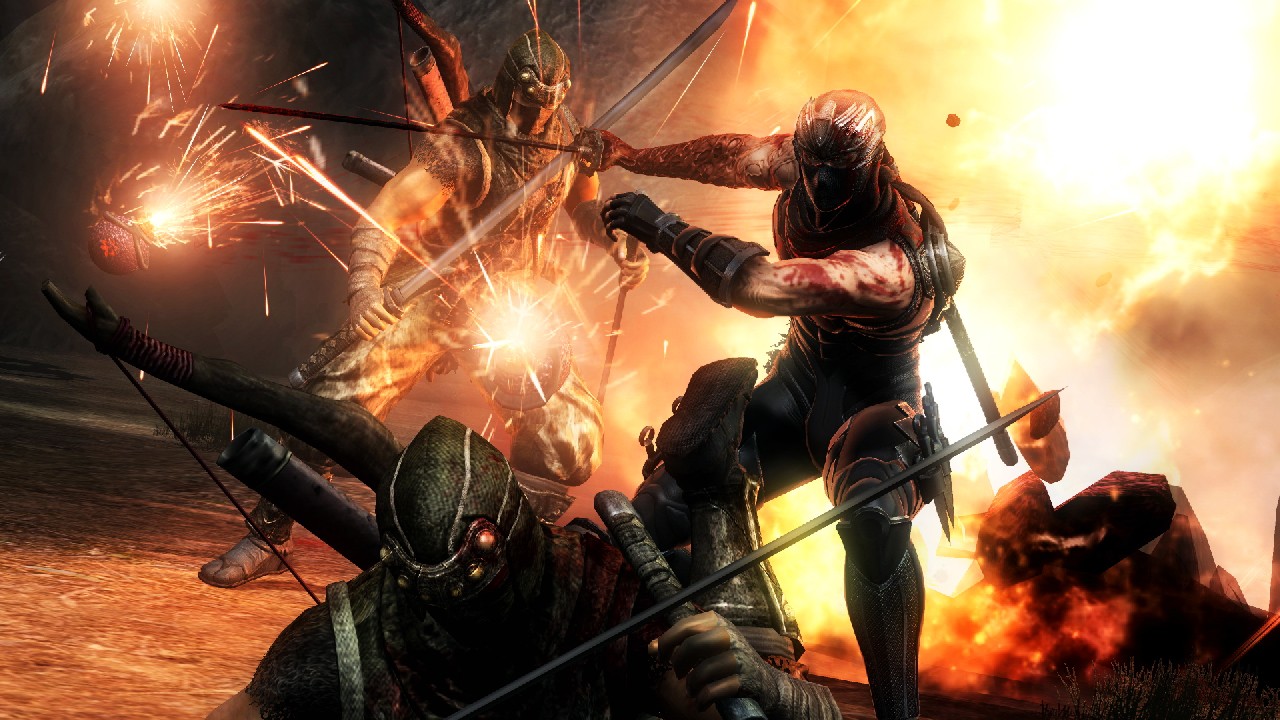 However in Ninja Gaiden 3 we see a ninja who is finally seeing that perhaps slicing and dicing every living human being in sight isn’t a good idea as Ryu is given a curse that taints his body with a red arm that slowly grows more tainted every time Ryu kills another person. While one would think that this is a great way to humanize the previously masked killing machine (Ryu removes his mask from time to time), it falls far short of its goal.

While players would expect to see at least some sort of choice provided here or some consequences for murdering everyone in sight, there is no harm done or even a way to avoid killing everyone. As players fight countless soldiers there will occasionally be some who are crawling away asking for mercy, though there is no detriment or bonus for choosing to kill or spare them. At the very beginning we are given a normal soldier begging for his life, even removing his ski mask in an effort to plead for his supposedly existing family. However the only option the player has here is to slowly walk forward and chop the man in half. No choice, no options, just blood and brutality. 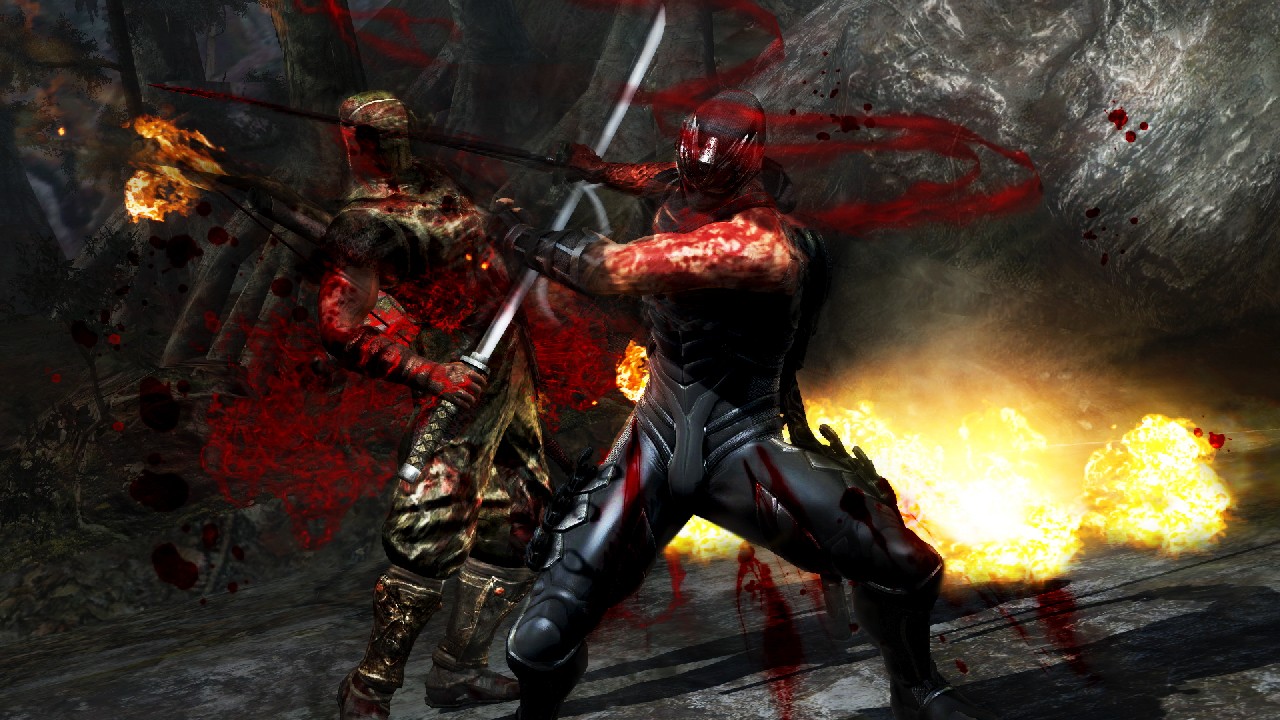 To top it off, the game’s storyline is very thin and predictable at best. Players will easily be able to tell what will happen before it happens and there is practically no mystery to be found here. To make things worse, the story is told in a heavy handed manner that occasionally slows the action to a crawl by providing back to back cutscenes or literal slowdowns in combat courtesy of Ryu’s cursed arm which grow to be tedious.

Audio & Visuals:
If there is one thing that can be said for Ninja Gaiden 3, is that it really makes combat thrilling visually. As players wade through the multitude of enemies they battle against they will slice through them with fluid combat and plenty of blood flying everywhere. It is worth noting that for some strange reason, dismemberment has been entirely removed from Ninja Gaiden 3. Instead players are meant to experience a “steel on bone” feeling. For what it is worth, this focus on simple combat damage instead of dismemberment does make the battlefield seem a bit more realistic and visually pleasing as blood flies everywhere when you slash your enemies to death.

The same unfortunately can’t be said for the game’s environments which range from being decent looking at best to bland and boring. There is a decent amount of diversity to be found in the battlegrounds but it is just a shame that they couldn’t be given more detail to provide a visually pleasing experience. 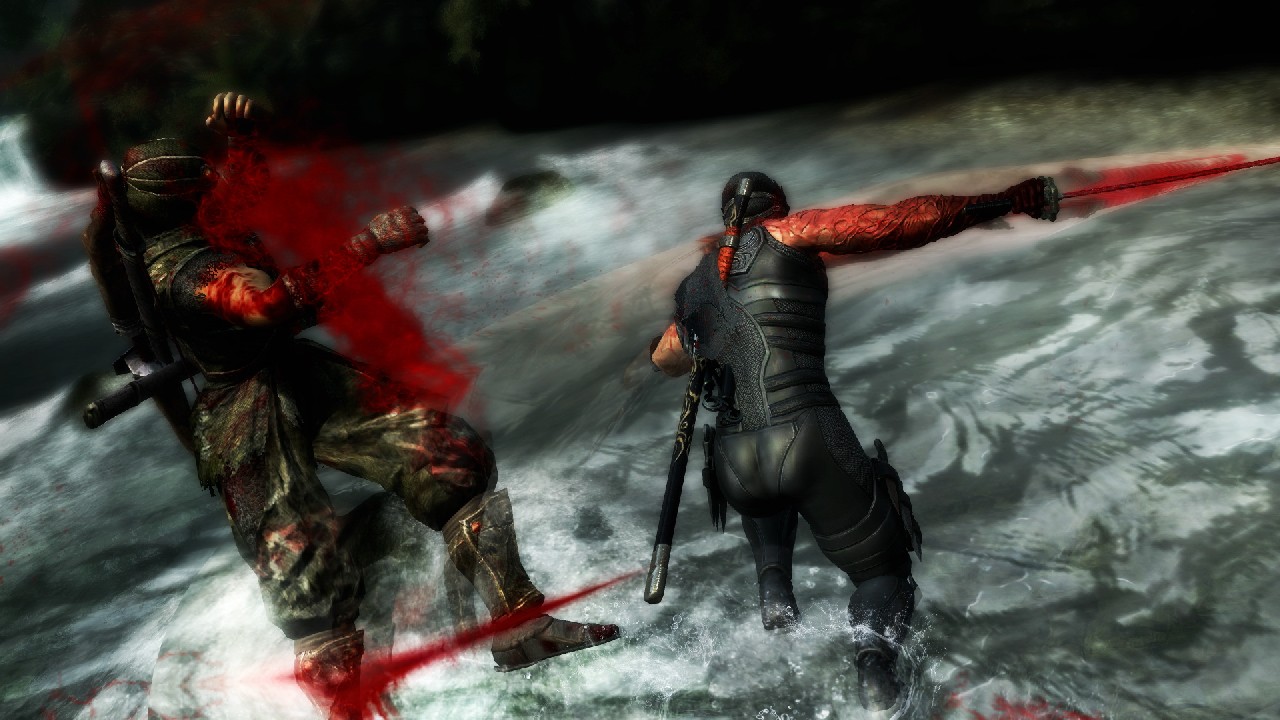 While the game may look great visually, there are only a few highlights to be found in the game’s sound department. As players battle enemies they will occasionally leave a few wounded ones in the melee and these soldiers can crawl away from combat begging for their lives or crying in agony. This is a major highlight to the combat as it makes it feel like a real battlefield at times.

Unfortunately the same cannot be said about Ninja Gaiden 3’s voice acting as nearly all of the characters lack emotional depth with their performances, making it even harder to become interested in what is being said at any given time. Nor is there anything special found in the musical score either as we see the standard action music applied in Ninja Gaiden 3 that you would find in nearly any other action title.

Gameplay:
At its core, Ninja Gaiden has always been an action title that featured difficult combat and a slew of weapons and abilities to deal with the deadly foes put in your path. Unfortunately that core gameplay has changed significantly. In what perhaps is an effort to make the game more available to those who have never played the series before, Ninja Gaiden 3 features much more streamlined action at the cost of variety and excitement.

While past titles may have made life difficult for Ryu whenever to many basic enemies appeared on the screen at any given time, Ninja Gaiden 3 has streamlined the combat so much that simply mashing the weak attack button is enough to get you through most encounters, with a few hard attacks thrown in for kicks. On the normal difficulty many gamers will find that they barely need to worry about their health gauge as they dish out death with their katana.

It is worth noting that you also get very used to that katana, as it will be practically the only weapon you will be using throughout the game. Unlike in past games where Ryu carried around a small arsenal of weaponry, Ryu only has one weapon this time around. Though for some reason there are some free weapons on the way as DLC but why they were not included in the vanilla game is anyone’s guess. Besides his katana players will also be able to throw shuriken and use a bow to deal out damage long range. Also gone are the collectibles and nearly every single one of Ryu’s ninpo attacks minus the ability to summon a fiery serpent dragon that will kill all nearby enemies with the same recycled animation again and again. 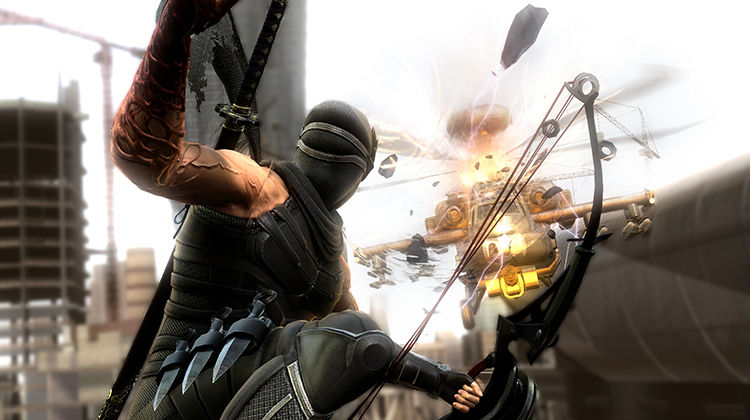 To make up for its lack of difficulty and uncomplex combat Ninja Gaiden 3 has seen fit to throw countless enemies at you. There will be plenty of times you will slice through nearly fifty people and become curious as to where their confidence comes from. In fact, the game follows a very linear path where players will simply run down the set path and clear out enemies in each area. Rinse and repeat nearly the rest of the game.

One interesting mechanic included into the game is the way that players are given a small cinematic experience every time they deal a mortal blow to an enemy. The camera will zoom in and provide a close-up of Ryu’s blade ending another person’s life. While it is interesting, it is used extremely often and grows to be tiresome in larger fights as enemies will gladly take advantage of the zoomed in camera to sneak in some cheap attacks.

With barely any combat variety to speak of, weaker and less challenging enemies and linear pacing, Ninja Gaiden 3’s combat is a shell of what it used to be. Rather than providing a new and unique experience it has degraded into a simple hack and slash game that only gets exciting whenever a boss fight presents itself. These boss fights are usually always unique and provide a thrilling change of pace from the monotony of basic combat as most of them feature exhilarating action sequences that will leave a smile on your face.

Outside of the single player mode, Ninja Gaiden 3 provides us with an interestingly titled online mode that is called Shadow of the World. This gameplay mode allows players to take on challenges with others in co-op or face off against each other in battles to the death. These multiplayer modes offer level progression that provides some new costume pieces and other things when you level up, though customization is very weak. 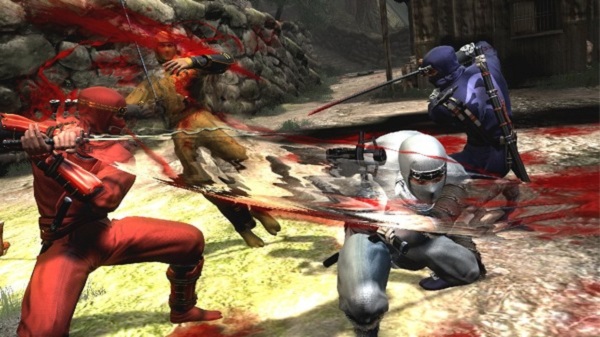 The co-op action is interesting enough and gives players “contracts” that set certain conditions for combat, though the actual combat feels like two separate people fighting near one another instead of together. The versus mode places players in team battles though nearly all matches are extremely convoluted and often turn into repetitive button mashing in the hope of stabbing the other person before they stab you. All in all the online modes offer a small distraction from the single player mode, though there is practically nothing redeeming to be found there.

Overall:
Ninja Gaiden 3 takes the formula of past Ninja Gaiden games and pretty much tosses it right out the window. There were so many things that fans will be looking for in this game and they simply will not find them as they no longer exist. While there is still enjoyment to be had in the fluid combat and the intriguing brutality of the new “steel on bone” system there are only a few exciting moments sprinkled on a mediocrely bland experience.