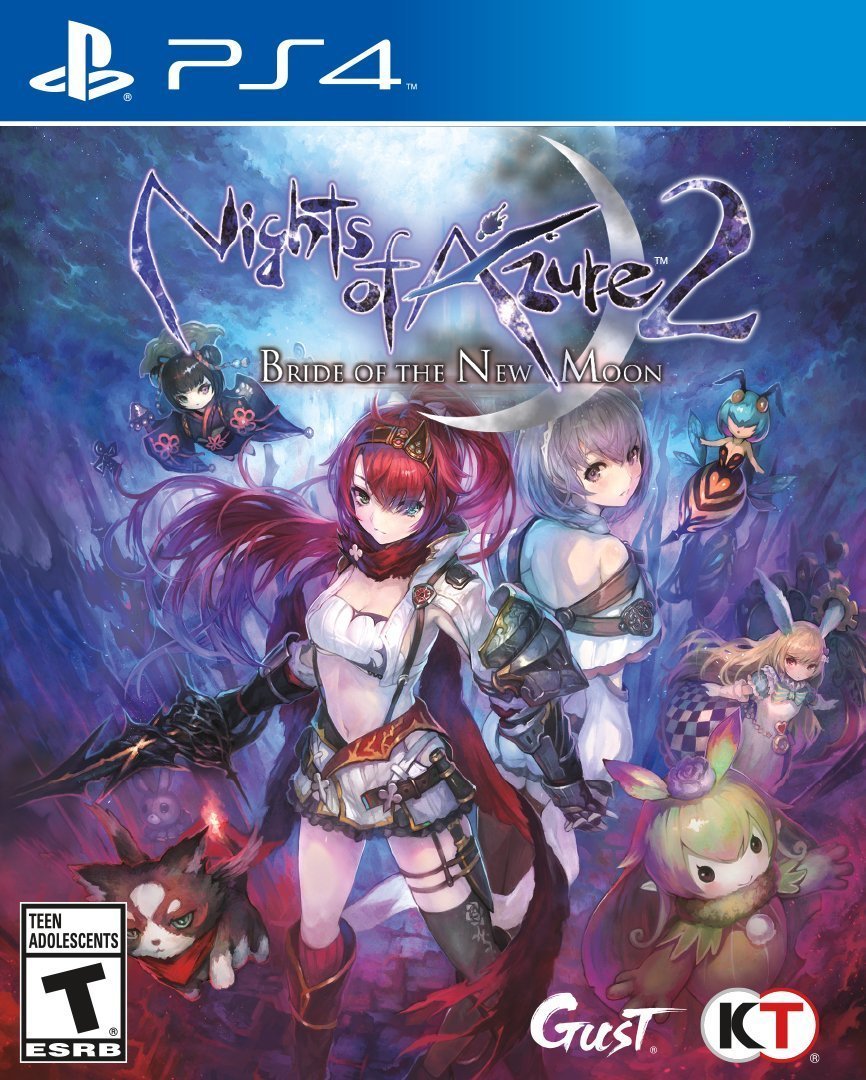 Nights of Azure 2: Bride of the New Moon

For the most part GUST has been known to develop games that are on the lighter side of things, often allowing players to enjoy the journey and interacting with as many characters as possible along the way. About a year and a half ago the developer tried their hands with something a bit darker in nature with Nights of Azure and saw a mild level of success from the game and now here we are with Nights of Azure 2: Bride of the New Moon. With a number of new mechanics and a brand new storyline, is this entry in the series worth your time?

Set some time after the events of the first game the history remains mostly the same, so for those who may be jumping in now, a demonic being called the Nightlord being defeated only to spread its dangerous essence called Blue Blood throughout the land. Anything touched by this blood became, whether it be human or animal, became a fiend that would terrorize the land. In an attempt to put a stop to the fiends, the Curia organization was born and has since worked to prevent such evil from ever rising again. 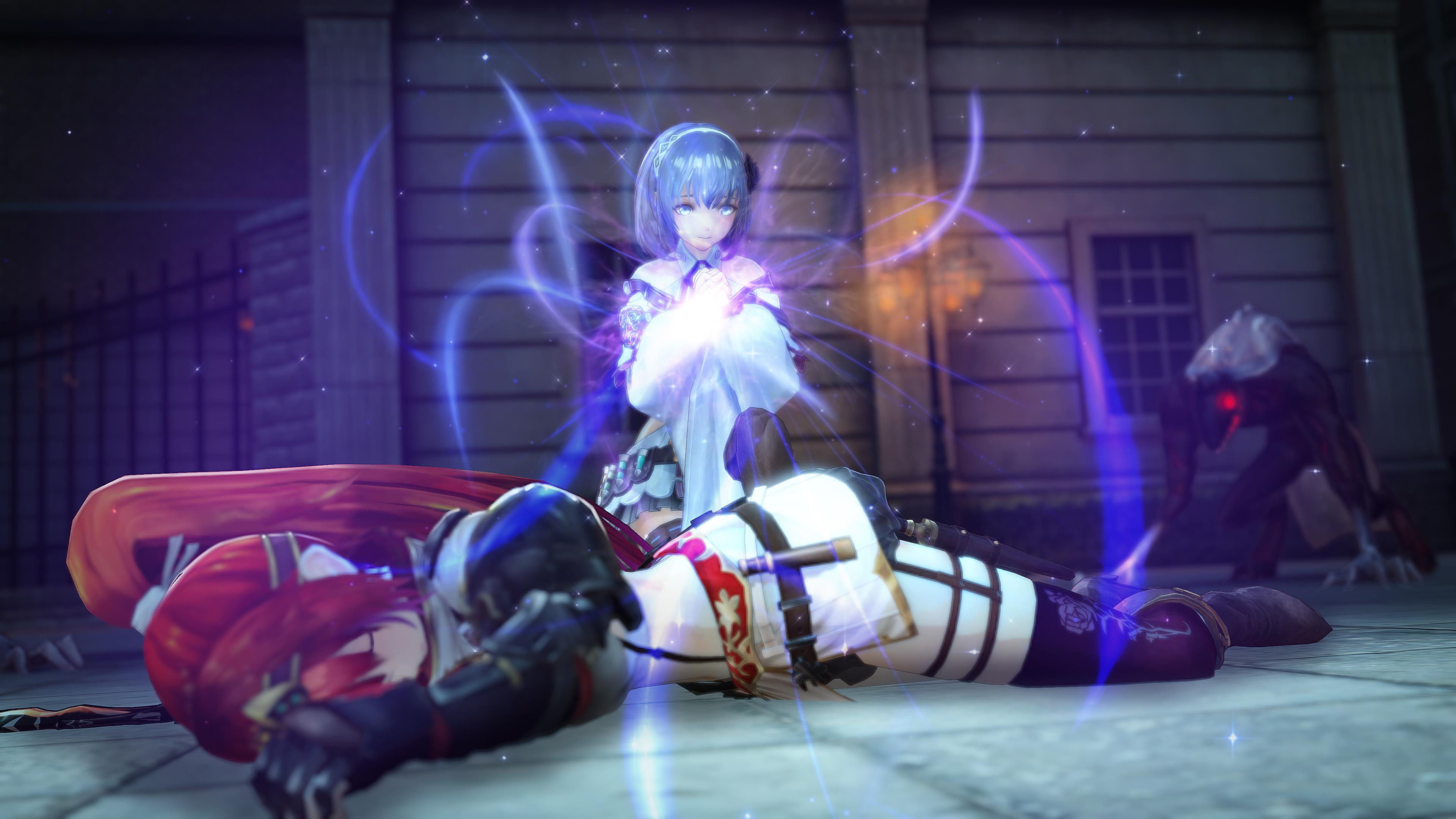 A female agent by the name of Aluche is given the task of guarding her childhood friend Liliana, who is now a priestess of the order, to the Curia but it is here they find out that only a horrible fate will await the pair. To put a stop to the new evil, known as the Moon Queen, an existence called the Bride of Time must be sacrificed and Liliana is the one who has been selected as the bride. Unprepared for such a mission, the pair set out but It isn’t long before another friend from their past by the name of Ruenheid appears to inform them that there is another possibility to that the Curia speaks of, but all that is for naught as the party is beset by none other than the Queen herself.

After being slain in combat, the game takes a new turn as Aluche awakens from her death to find that she is being cared for by the strange Doctor Camilla who informs her that, in an effort to revive her, Aluche is now a half-demon as a demonic heart now beats within her chest. To make matters worse, since her death the location of both Liliana and Ruenheid have been lost. As such, Aluche sets out with a tainted power in an attempt to save her friends and the world, no matter what route she must take. 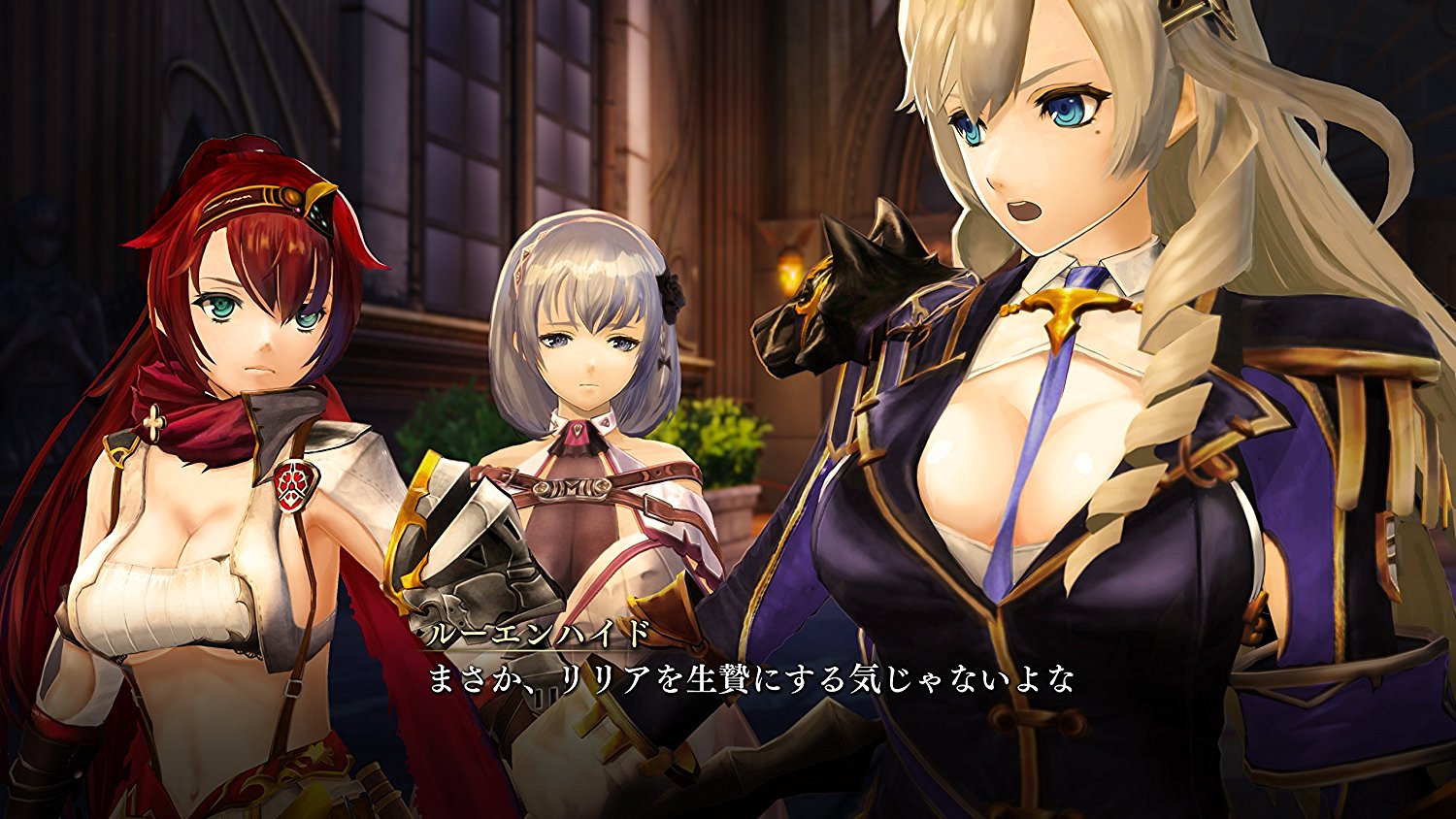 There is a certain problem that arises when you create a storyline that thrives when you interact with the cast and learn little bits about them and enjoy the service that is provided as your relationship grows and hamper it with something as frustrating as a time limit. Gust is no stranger to placing time restrictions on story events as the majority of the Atelier franchise featured such a system but nowhere did it feel more restricting as in Nights of Azure 2: Bride of the New Moon.

You see, as you advance the story you can take part in various sub-plots and raise your affection level with the numerous “Lilies” as your female companions are called in the game but thanks to a strict time limit and other mechanics, you’ll often be limited in these relationships to a rather frustrating level. The core storyline itself is fairly well handled and offers some unique little twists here and there but don’t expect anything to really jump out of the story outside of the aforementioned character interactions.

In many ways Nights of Azure 2: Bride of the New Moon plays similar to its predecessor as players will find that their home base is Hotel Eterna where Aluche can speak with her Lily companions, purchase and sell items and equipment, take a dip in a bathing suit, or even have a cup of hot chocolate with your companions. This is also where players will be able to use accumulated Blue Blood to power up Aluche and raise her levels. 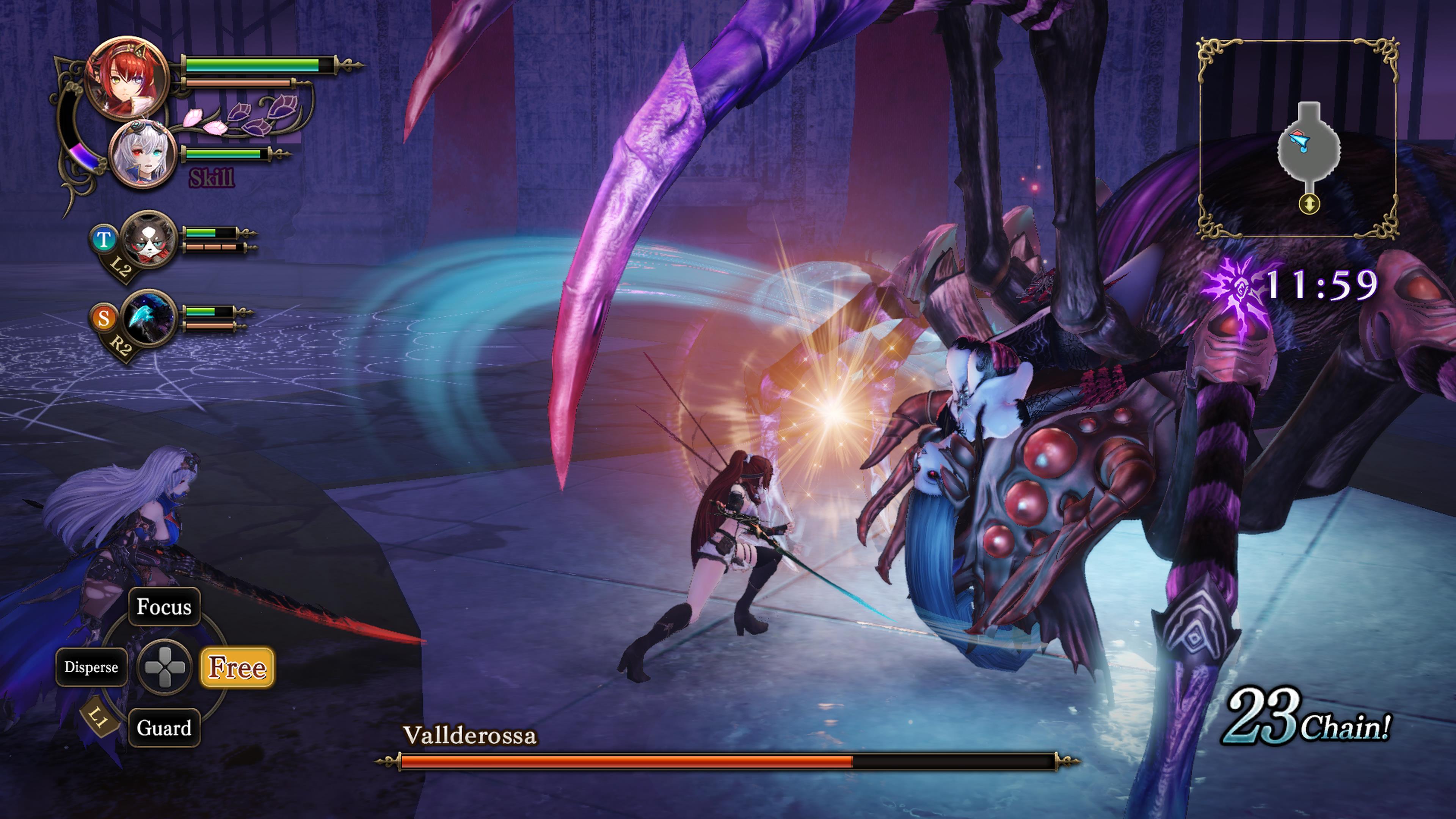 For the most part, players will be spending their time outside of Hotel Eterna and taking part in field missions where Aluche will battle against enemies and try to complete as many tasks possible within a limited time frame. You see, thanks to Aluche not being accustomed to her new body there is only so much time that she can spend out in a field before having to return to Eterna and get some rest. To make things worse, players are given a second time limit where every time Aluche returns to rest, a night passes and once the moon grows completely dark, the game comes to an end. This means that not only are players limited in actual exploration but they are also limited in how long they can explore before worrying about advancing the storyline and returning the moon to its previous phase, making players have to often make sacrifices in an attempt to see as much of the story as possible without risking a game over screen.

That being said, the actual combat isn’t that difficult to master as Aluche controls in similar fashion to a standard hack and slash title where she can unleash various light and heavy attack combinations. To change things up this time the party system has been revised and the Servan system has also been made a bit more limited. Two Servans can still be brought with Aluche and a few of these can even change into different weapons for her to wield, but for the most part they are used to take advantage of various blockades that are inserted into levels. 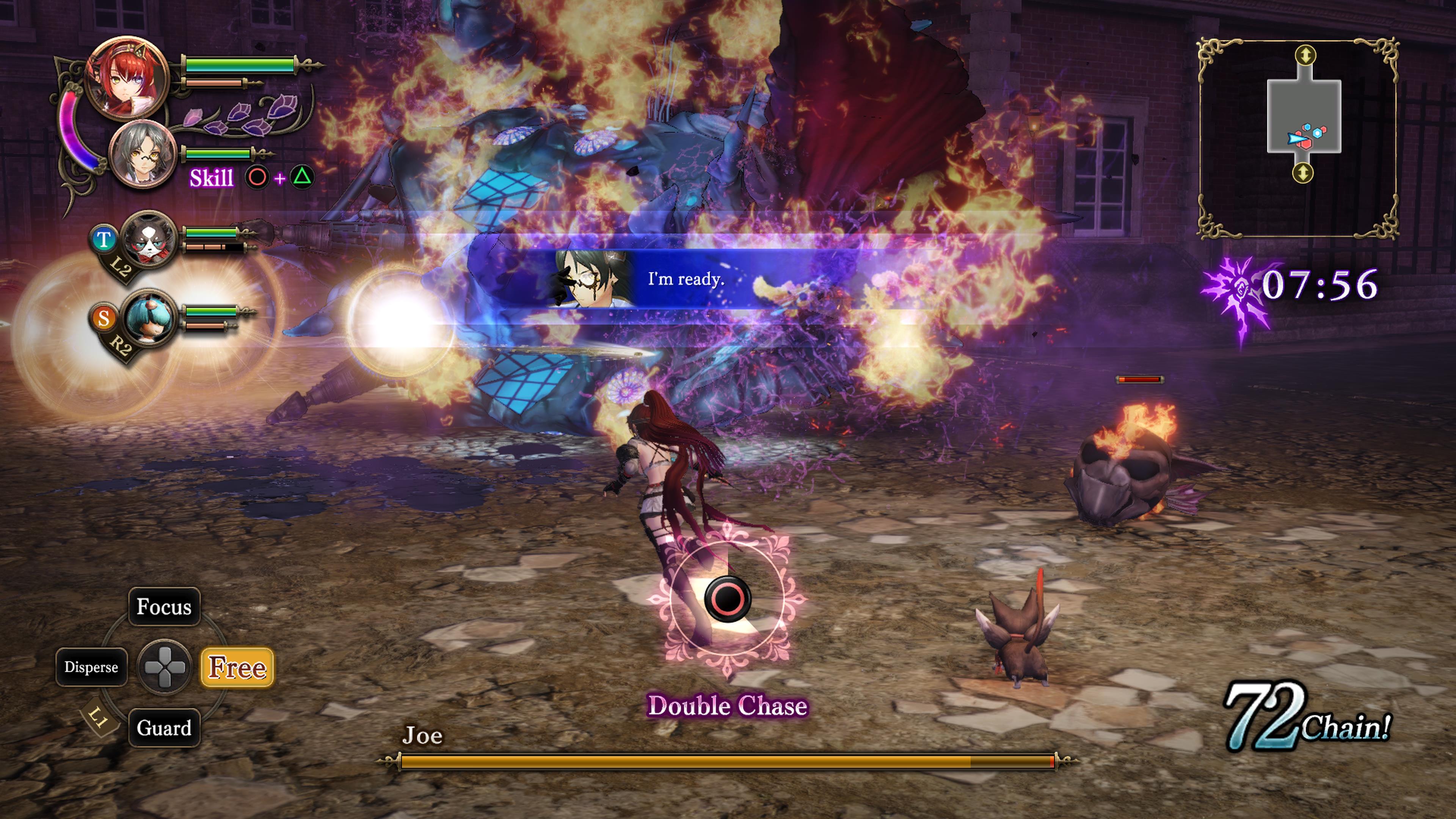 These include areas that require a Servan capable of burning a path, or something else, and there will be instances you’ll need to worry about whether you need strong fighting Servans or those capable of clearing an obstacle in an attempt to avoid having to return to Eterna and lose your available exploration time, potentially ruining a chance to complete a limited mission. Thanks to this, actually trying to complete as many side missions and Lily interactions as possible is something of a pain that is hard to be annoyed by.

The other change to the party system in Nights of Azure 2: Bride of the New Moon is that Aluche can now be accompanied by a Lily, one of the female companions who join her on her mission. The Lilies’ AI can be given four different patterns to follow though thanks to how certain elements tend to play out, you’ll usually want them to stay focused on the enmy you are attacking. This is thanks to “Double Attacks” and “Revenge Attacks” that happen when Aluche and a Lily attack the same enemy at the same time or damage an enemy that hurt one of the pair. 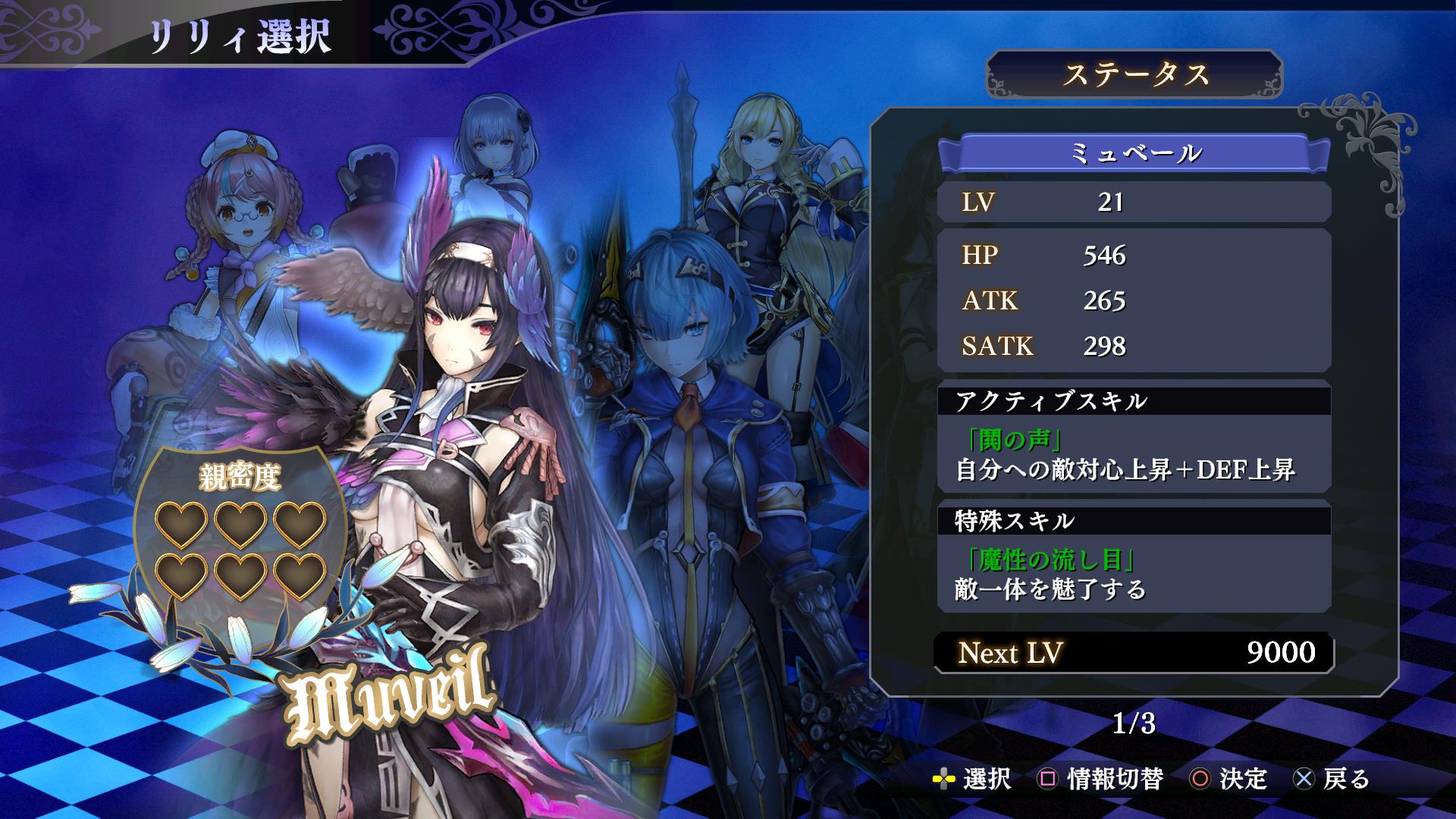 Whenever this happens a tension gauge is filled and special skills can be activated. These skills vary depending on what Lily you have assisting you but they range from small buffing abilities or small scale attacks to large area of effect attacks capable of completely wiping out an enemy force. With these abilities growing stronger as your bond with a Lily is increased, players are encouraged to strengthen the Aluche’s relationship with these characters, though don’t expect most combat encounters to be too difficult even with an unfamiliar partner as most encounters, even some boss battles, can be incredibly easy on the Normal difficulty setting, so you will likely wish to avoid the suggested Easy difficulty unless you happen to be entirely new to action RPGs.

The aesthetic from the first entry in the series remains intact in the sequel here but that isn’t a bad thing as these unique designs are not only quite detailed but incredibly gorgeous. The character designs for most of the main cast come in a wide array of styles, though be prepared for even the basic clothing designs to be fan-service heavy, and basically every character has a swimsuit design as well so be prepared for that too. The environments that Aluche travels through and the enemies that you battle against are fascinating and feature quite a bit of detail so even though you may revisit areas a few times, you’ll never feel bored retreading territory. 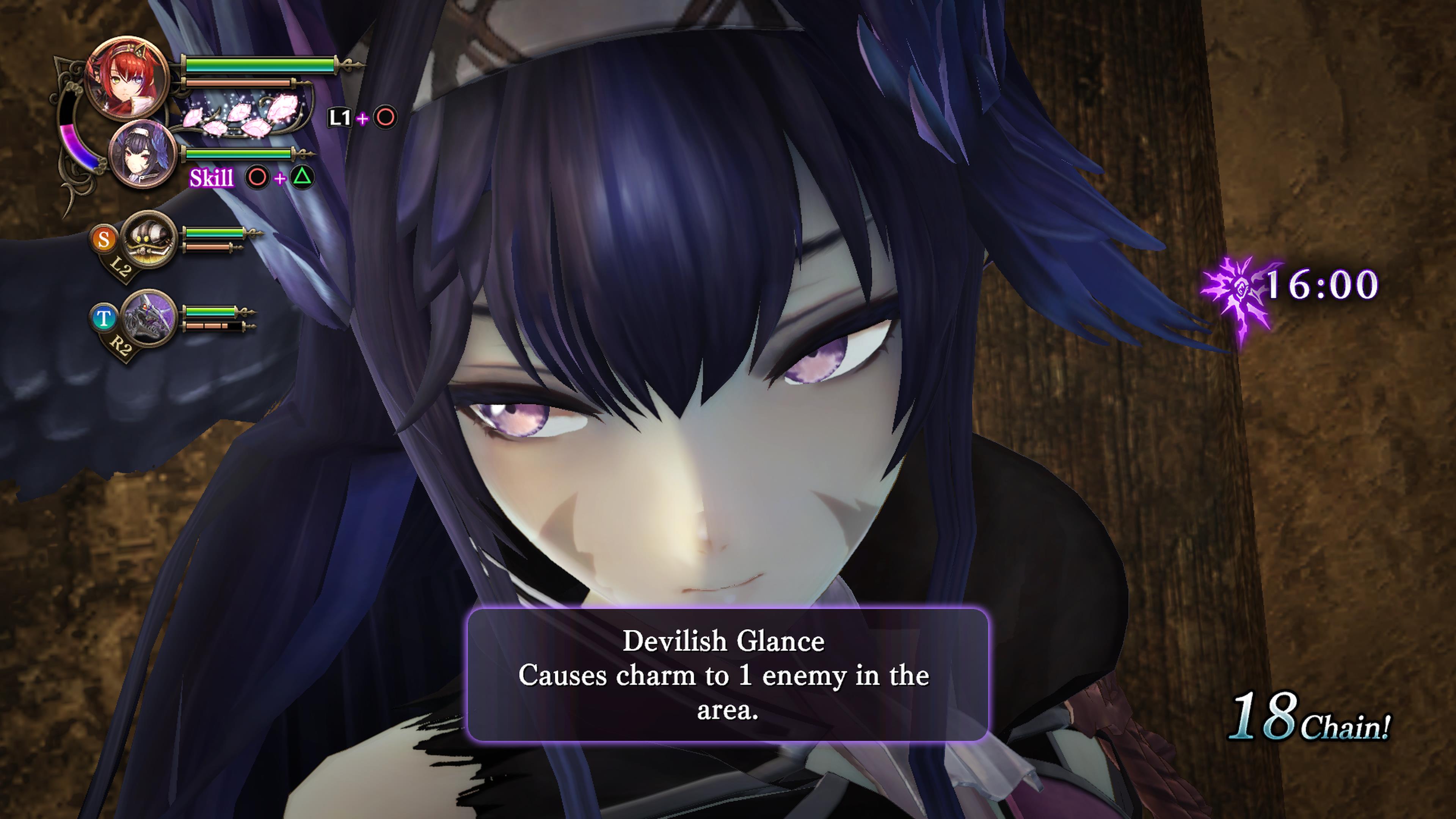 It is worth noting that this release of the game comes with only the original Japanese voice track. This works well for the most part as the voice actresses fit their roles well here and the subtitles do a solid job keeping up with the dialogue without any noticeable issues like previous Koei Tecmo releases. The soundtrack also features a wide array of music that fits the theme and aesthetic of the game perfectly, making any venture into the battlefield a treat when you aren’t rushing from place to place.

Keeping the same gorgeous aesthetic and theme from the first game Nights of Azure 2: Bride of the New Moon makes enough changes to the game’s combat mechanics to keep things feeling fresh and offers a decent enough storyline with highly enjoyable character interactions that will keep players engaged. The issue being that despite its improvements, the combat remains mostly simple in nature and the timer is far more of an issue than it should be. As such, while Nights of Azure 2: Bride of the New Moon may not bring too much to the table for newcomers, fans of the original will be pleased with the improvements and the emphasis on relationships in this entry.

Nights of Azure 2: Bride of the New Moon offers a decent new storyline with enough changes to keep the simple combat system feeling fresh but falls short on offering a challenge outside of a troublesome timing mechanic that limits player freedom.
7.5