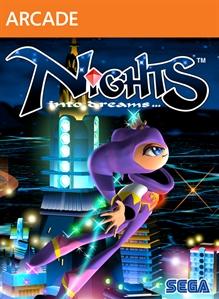 Overview
Sega have released a lot of cult classics, but NiGHTS may be the most under-rated gem that was ever birthed by the famed publisher. Taking the role of a small but charming little jester and two children, aerobatics take the starring role of Nights into Dreams as players attempt to fly through rings and snag up every sphere in sight. Oh yes, there is more – but those of you who have experienced the original Saturn version or one of the latter ports know already what a unique experience this game can be. Sega have went ahead and released the full version of the original yet again on the Xbox Live Arcade and Playstation Network, with a lot of extra features in tow and a shiny coat of HD paint. Has this journey into dreams became a nightmare, or is it the soothing slumber so many recall trekking through over sixteen years ago?

Story
The story in Nights is pretty basic for the most part, but could certainly have a deeper meaning based on one’s own perception. Players take the roles of Claris and Elliot, who are both going through the kind of dilemmas children typically have when they get whisked into the beautiful dream world of Nightopia. Nightopia is having some trouble at the moment however, as Wizeman the Wicked is stealing the power of dreams to rule the land, with an eventual plot to take the world shortly after. After partnering up with a poppy little jester named Nights, these two kids set out on a journey to save both worlds while solving their own personal problems. 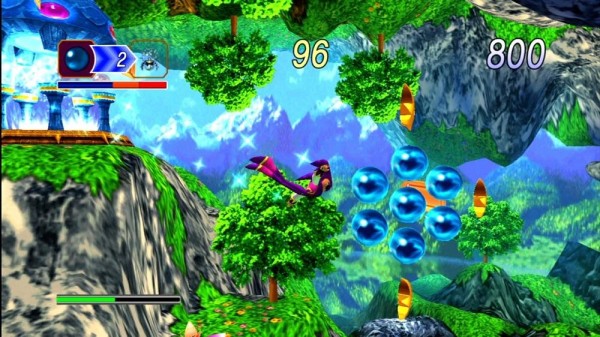 Much like many modern successes like Bastion and Lost in Shadow, Nights relies on telling it’s story through a child’s eyes. The Dream world is full of all sorts of color, magic, and amplified fears, which do wonders in bringing this across. I know this story sounds a bit meager, but the innocence of youth is a powerful tool – and one that can tell a beautiful tale if utilized correctly based on design. Thankfully, Nights puts together one endearing narrative that still feels relevant by today’s standards, and is sure to be a slightly moving experience for anyone going in looking for a bit of nostalgia.

Gameplay
I’ll be honest, before this review, I played very little Nights. I knew of it, respected the brand, and loved seeing the many cameos in other Sega titles – but never quite got around to sitting down and actually playing it. Ten minutes in to this HD remake, I found myself flying through rings with Nights and controlling a bumbling kid from time to time, utterly confused of just what to do. Yes, I was lost. After a little more time and practice, the objectives soon became quite clear and the true magic of this title started to shine through.

Each time you start a level, you start out as either Claris or Elliot, based on whichever kid you choose. After coming in contact with Nights, you will then take to the skies as the jester in a rather side-scrolling fashion, passing through rings and collecting blue orbs as you progress. The goal is to simply collect 20 of these orbs before the timer gets to zero, or Nights will lose all of it’s orbs and the player will return to child form and have to start from scratch yet again. Flying through rings gains points, which can be used to get a better rank on each stage. Combos in acrobatics can also be pulled off as well, giving an incentive to take advantage of all of Nights flashy aerial maneuvers. 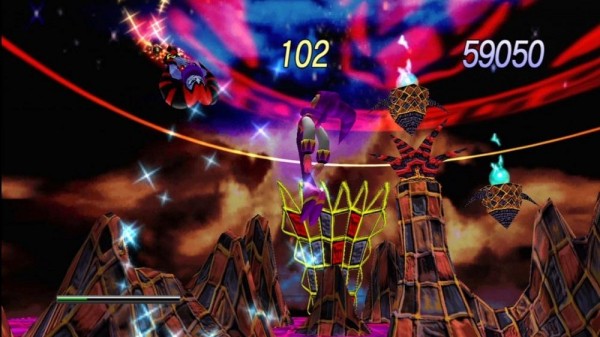 Every stage has a set number of sections that need to be played in succession. For instance, once you finish gathering 20 orbs and delivering them to the ranking point, you start the next “Mare” instantly, gathering more orbs. After all of the Mares for a stage are complete, a boss battle takes place where the player must use their dodging skills and handy dash to defeat a large and menacing foe. Now, boss battles are all rather simple in concept, but have to be approached in a certain fashion in order to see victory. I went in knowing nothing for my first battle, and I was quickly thwomped to death by a large, screeching obese ball-woman. The trick was to simply latch onto her front side though, and toss her to a further portion of the stage until she met her end. Most battles work in this way, but never play the same so the player always a feeling of unease – and for this game, that is a good thing. 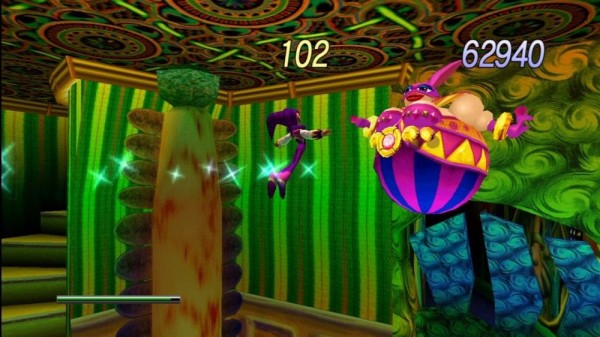 As for the controls, for the most part, everything is very fluid and has held up exceptionally well. When Nights into Dreams delivered on the Saturn, a special controller was also released that featured an analog stick. It seems that design choice was a clever move, as 16 years later this title proves it’s worth by fully utilizing that stick we take for granted these days due to it’s common place in gaming. The simple joys of flying are sure to make any player feel free and pulling off loops and the other acrobatics while passing through rings is made so easy that even a novice player will be able to quickly learning how to rack up some decent combos. As for the kids…well, that is another story. 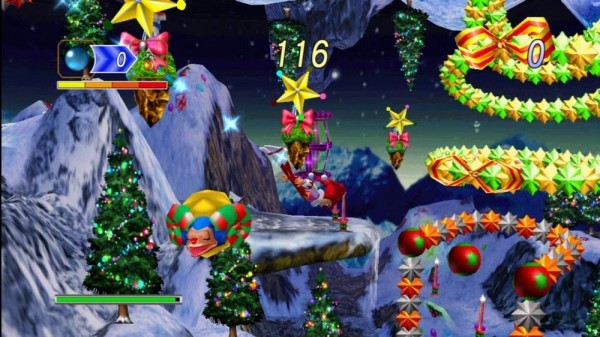 The player will take control of Claris or Elliot at the start of a stage or if Nights fails. If it’s for the latter, a large clock-like monster will begin chasing the children while they hustle to the nearest orb drop-off. If caught, the game ends. It’s an interesting dynamic, but one that suffers from poor controls and awkward movement. Its one thing to go from taking to the air with Nights to playing as a child on the ground in a 3D plain, but it’s a whole different feeling of frustration when that kid controls like a horse without two front legs. To the game’s defense, I want to say that this feels intentional. It’s not fun to play as the children and the first instinct of any human would be to run back to their enjoyment (Nights, in this case). Once enough orbs are re-collected and Nights is unlocked yet again, the player can resume the game and go back to their happy, flying ways. It’s that level of tension that adds in extra excitement to the experience, and just makes Nights more rewarding as a whole. Yeah, the kid’s controls are pretty terrible, but passable when you think about the odd reasoning behind it.

It wouldn’t be a Sega HD remake without a lot of extra features and goodies for fans of the original. While playing, you can collect movies, gallery photos, and sound clips from the game which can all be viewed at any given time afterwards. If the Sega Saturn version is more your thing, you’re also in luck as it’s also available in all of it’s downgraded glory. Christmas Nights is also unlockable, and with leaderboards and the score ranking process already jammed in, there is a good chance you will be playing this classic for a good chunk of time due to how addictive the formula still is.

Visuals and Audio
Compared to the original Saturn release, the “Brand new Nights” has clearly been upgraded through visuals, and looks much smoother and brighter due to the HD coat of paint. All animations never miss a beat either, and just one spin through the older version will show the player just how much love this HD version received due to the 2D sprites and graphical shortcuts that developers used long ago to portray 3D models. It also helps that every stage is already built like a living, breathing art piece. 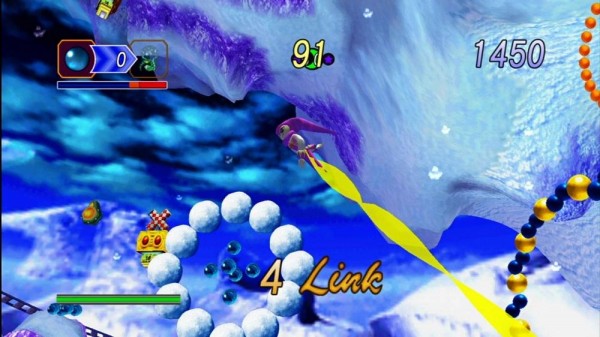 The soundtrack of the game is honestly the sweetest part of this whole dish, as every tune is soothing to an extent and does a great job at capturing the dream-like atmosphere. Many of you probably have heard this legendary collection of tunes before in one form or another, but when you’re actually playing the game with the beats included, it makes the entire experience absolutely mesmerizing. The little chimes from special techniques and menacing sound of an approaching clock add a lot to the full monty as well, tying everything together nicely while keeping the game feeling fresh throughout.

Overall
Nights into Dreams is a magical little game, full of everything a child holds dear to them. The graphics are bright, colorful, and often quite out there at times, but for a game all about dreams – well…that is the point. It’s always a good feeling to go through an older title that you haven’t played and enjoy everything on display, and I did just that with my own time with Nights. Not only I can I now easily recommend the game to anyone out there looking for something odd yet bizarrely charming, I can also say that Sega have did a fantastic job at bringing this beloved – yet under-appreciated mascot to a new generation of dreamers.