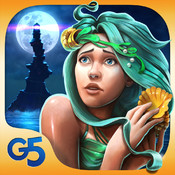 Overview
Power, riches, respect. Three of the most sought after goals ever to wander through the minds of humanity. Most spend their whole lives working, carefully building up just enough to be happy. However, then there’s those few. Those who decide that enough isn’t enough. They want more and are more than willing to metaphorically make a deal with the devil. And by devil I mean Sea Devil. And by metaphorically I mean things didn’t turn out too well… 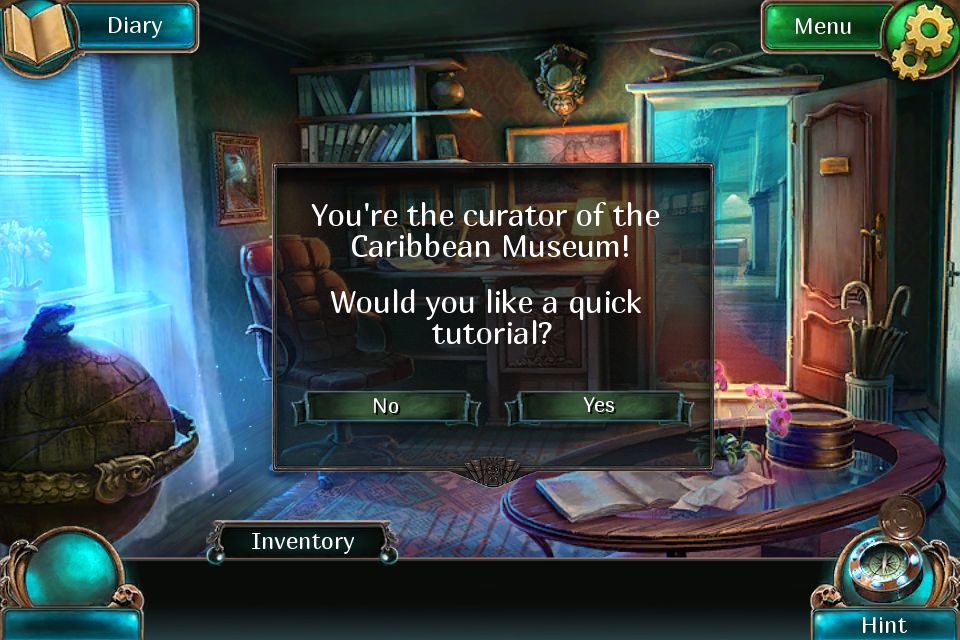 Wouldn’t it be great if life were like this?

Story
Long ago…
The Mayor of the island town of Kingsmouth made a rather important decision. Rather than think of a natural way his town could bolster their income, he decided to make a deal with the devil of the seas, the infamous Davy Jones. Though he was provided with the means to keep his towns finances above water, his deal  also carried with it an unfortunate side effect, a curse if you will. His citizens ceased aging and began to transform into fishpeople. Though only the truly wicked of heart were immediately afflicted, the curse permeated to the slightly dubious…then the innocent.

As the hero of the story, it is up to you to continue forward, besting the Mayor’s devious traps and never ceasing to rescue the town of Kingsmouth’s one and only hope: Calliope. A siren with the power to break the curse and free the plagued townsfolk. Naturally, the Mayor has scattered the tools necessary to accomplish this, so you’ll have to explore the twisted town for all manner of relevant relics and curious curios . Of course as the curator of the Carribean Naval Museum you’re used to seeing all manner of artifacts. However, magic boxes and vials infused with the power of the ocean still qualify as…less than ordinary. But I mean, this is Nightmares From The Deep 2, so you’ve already tussled with Davy Jones and his oceanic magic once and come out alive. What’s one more? 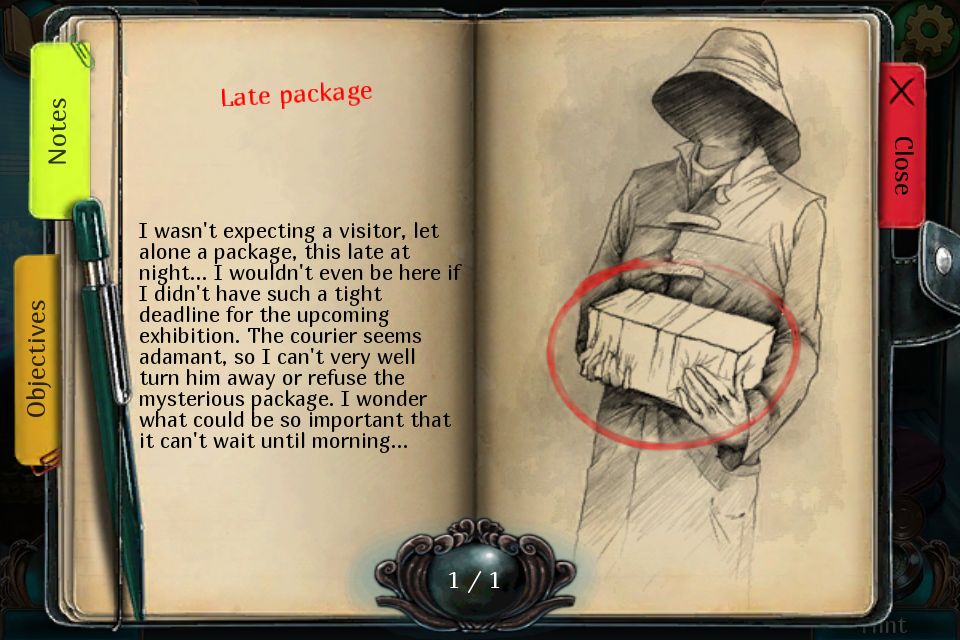 Those are some thorough notes

Gameplay
Just like its predecessor, Nightmares From The Deep 2 is a point and click puzzler. As you proceed through the story, you’ll unlock a number of new locations to explore, each containing a plethora of hidden items and passageways. Though many of these paths will be open to you at once, you will be unable to explore many of them without first acquiring the correct items. For example, though you may clearly see your objective, you’ll need to find out how to open the large gate that impedes your progress. May I suggest finding the keys? Of course explosives work just as well. That being said, each obstacle is only overcome by a specific set of objects, so even if you have a hammer, you might not be able to open a crate because what you actually require is a crowbar.

Certain portions of the game will require you to play a little game of “I Spy.” Placed in a smaller area, you must locate all objects on the presented list in order to attain your next useful tool. If you would prefer to not undergo such as task, or just want a little break from the same game you’ve already played a few times, you can instead opt for a quick little bout of Mahjong. Each discovery area includes the option to play said game instead with no penalty to your overall progress. Whichever you choose, you will receive the item you seek, so feel free to have a little fun. You know, before the evil mayor succeeds in his dastardly plan that is. 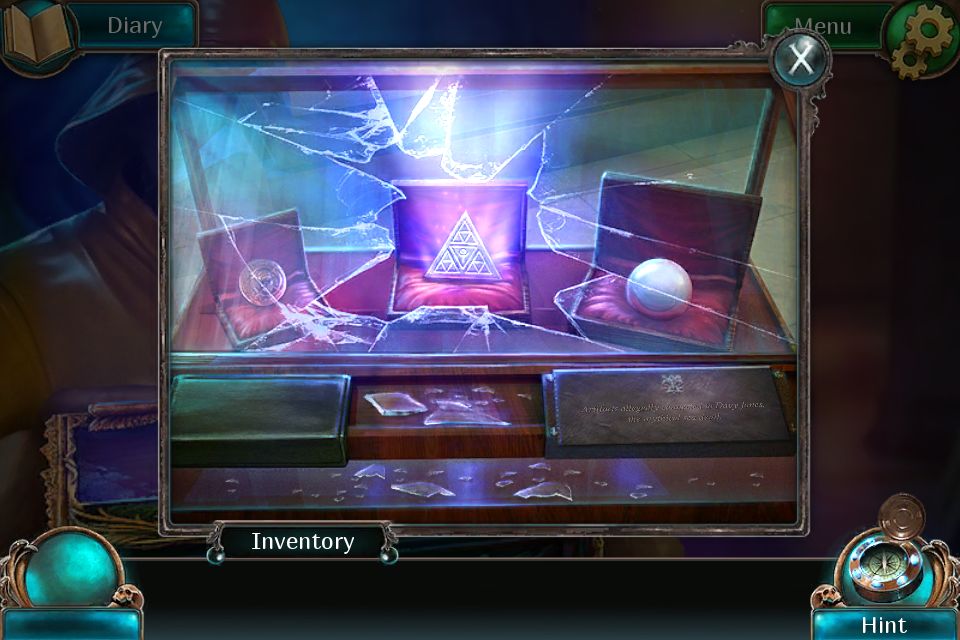 There are also a number of minigames within each landscape, which serve to mix up the fairly repetitious gameplay. From tile puzzles, to chemistry, to safe cracking, your perilous journey will have you undertaking a number of tasks. Completing said tasks will allow you to progress through the game, acquiring new items and unlocking new areas. As they are a neccessity and may be a touch on the hard side for some, the game includes a Skip option. Said option builds up over time, allowing you to bypass any puzzle if you just can’t get through it on your own.

Should you ever find yourself overwhelmed by the landscapes spread before you, there is a handy dandy hint button that will guide you on your way. If used in quick succession, the hint button will enter a recharge mode, preventing you from using it for a period of time. How long it takes the button to recharge is directly tied to the difficulty you selected at the start of the game, with it taking longer the harder you set the game to be. Difficulty also has an effect on the more passive hint system of sparkles. If you spend a decent amount of time in a single room, objects of interest may sparkle to draw your attention. 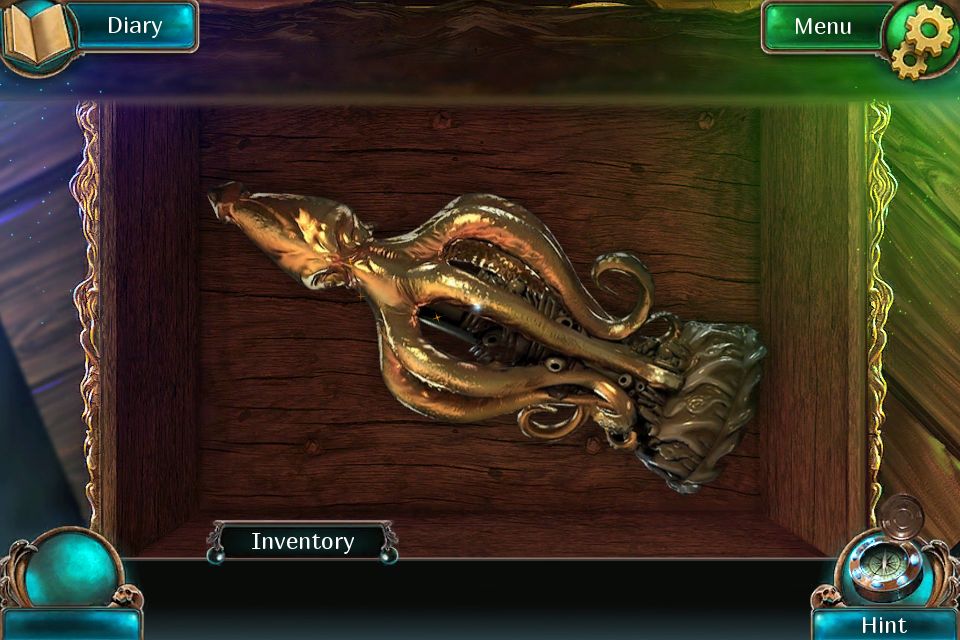 Looks valuable, hope I don’t put a Kraken it

Visuals
As a point and click game, Nightmares From The Deep 2 is, for the most part, a static game. Though you move between a number of areas, it is a simple fade to black transition before you simply find yourself somewhere new. That being said, each environment is very intricately drawn and displays a large amount of detail, which is good…for the most part. Whilst it is usually pretty clear what objects a re clickable, there is the ocassional area where the attention to detail on everything in an area proves to be a source of confusion. The I Spy minigames don’t count though, as they’re supposed to be that way.

In contrast, characters move surprisingly fluidly and feature a rather high degree of motion. Honestly, sometimes they look like a real person moving throughout the world. Naturally this is a good visual element, however it also has the unfortunate effect of bringing to light some of the…lesser visual qualities. When compared to such a fluid character, the overall static nature of the backgrounds becomes glaringly obvious. The dissimilarity between the two elements also makes it seem as if they are, in fact, separate from one another. As if the character is not actually interacting with the world in which they move.

The game will also ocassionally shift into a cutscene, choosing to display the more crucial story elements in a more cinematic fashion. These cutscenes are presented in full CG, with characters walking, talking, attacking, falling…all that good stuff. While these moments are the visual highlights of the game, they again serve as a direct contrast to the visuals of regular gameplay. It can be a little jarring to go from a dramatic chase sequence to yet another picture of a room. 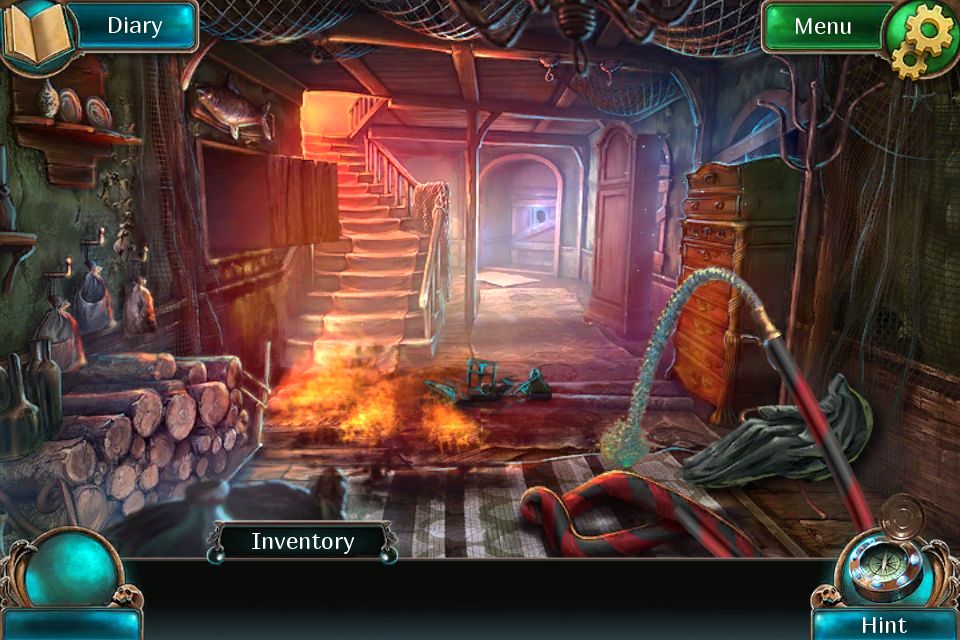 Just a little to the left…

Audio
As to be expected from its spooky premise, the game contains a fairly haunting soundtrack. Included are your ghoulish classics, pipe organ for depth, violins for those piercing notes. For added creepiness, the pipe organ/piano is occasionally played just a tad off key. Nothing scarier than a tone deaf spirit. As the game is set near the ocean, the sounds of waves crashing against the shore and seagull squawking in the distance is also fairly consistent. It’s a small touch, but it does serve to unconsciously remind you that the ocean looms ever near…

As with other G5 titles, the game also contains a full voice cast. Though not what you would call spectacular, the voice acting serves to add some form of depth to the main cast, giving them enough personality for you to care what happens to them. That being said, the voicing sometimes fall into the trap of exposition, explaining issues to you with such detail that they lose all pretext of being a real conversation. Again, only a small detail, but these things add up. 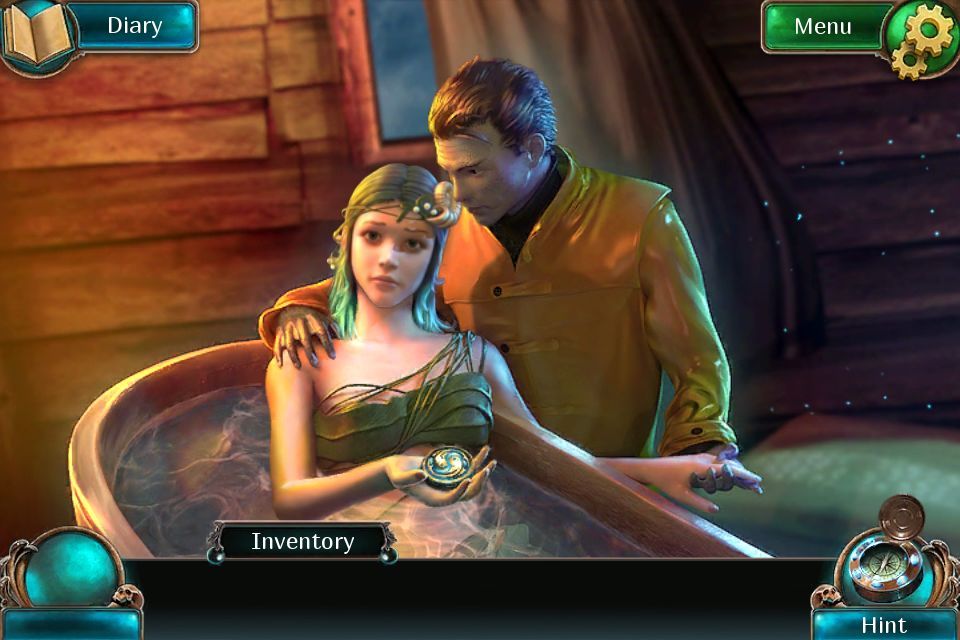 Just a usual day in the life of a museum curator

Overall
Nightmares From The Deep 2: The Siren’s Call is just what you’d expect from a G5 point and click adventure. A number of well drawn rooms to explore, a small cast of heroes and villains to observe and a larger than life plot to quash. The cutscenes and voice acting are a nice touch that elevate the game above a lot of the other point and click adventures out there and the number of puzzles is sure to keep you interested. That being said, it’s still very much a preference. If you’re a fan of this style of game, you’ll have a blast. If not, you’ll still have fun, just not as much. All in all a fun little game. Make sure you play the little epilogue once your quest is complete, it may or may not hint at another journey to come. A cliffhanger about a cliffhanger, how meta is that?