Nex Machina is a twin stick shooter with cutting edge modern graphics. Set in a world where humans have been surpassed by artificial intelligence, robots have decided to overthrow the humans and take Earth for themselves. Players must now shoot down hundreds of robots and save the hapless humans to prevent praising their new robot overlords. Nex Machina features six worlds and over a hundred levels filled with secret paths and collectibles to discover.

The premise of Nex Machina is as deep as the story gets. This is an old school arcade game that does not have time for silly things like plots. It only wants to know if you plan on continuing or not. 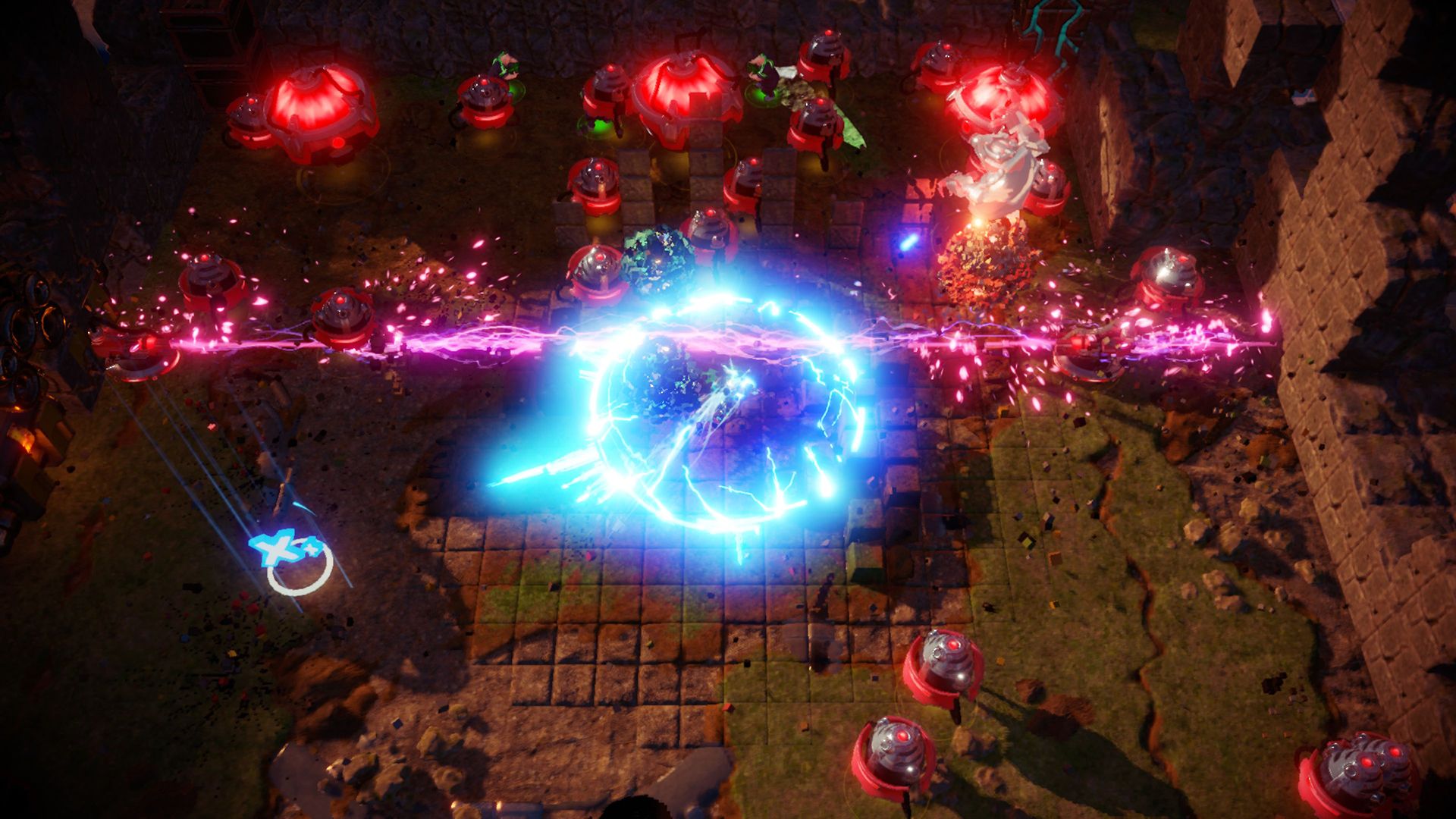 Nex Machina is a classic twin stick arcade shooter for the modern era. There are over a hundred short levels split across six worlds. Each level consists of a variety of enemies that will spawn in at a pre-set pattern with optional objectives like special enemies to kill and humans to rescue. Enemies vary from the standard cannon fodder to particularly nasty robots that fire a special laser at blistering speeds that cannot be dashed through. Each world is capped off with an awesome multi-phase boss fight that puts the player’s movement skills to the test.

The level design is excellent. The game gets progressively harder at a good pace and new mechanical challenges are introduced with some regularity. Trying to complete the optional objectives also gives the game a nice boost in difficulty, providing arcade veterans a much needed challenge. The sheer number of secret levels and collectibles available gives the game plenty of replayability. 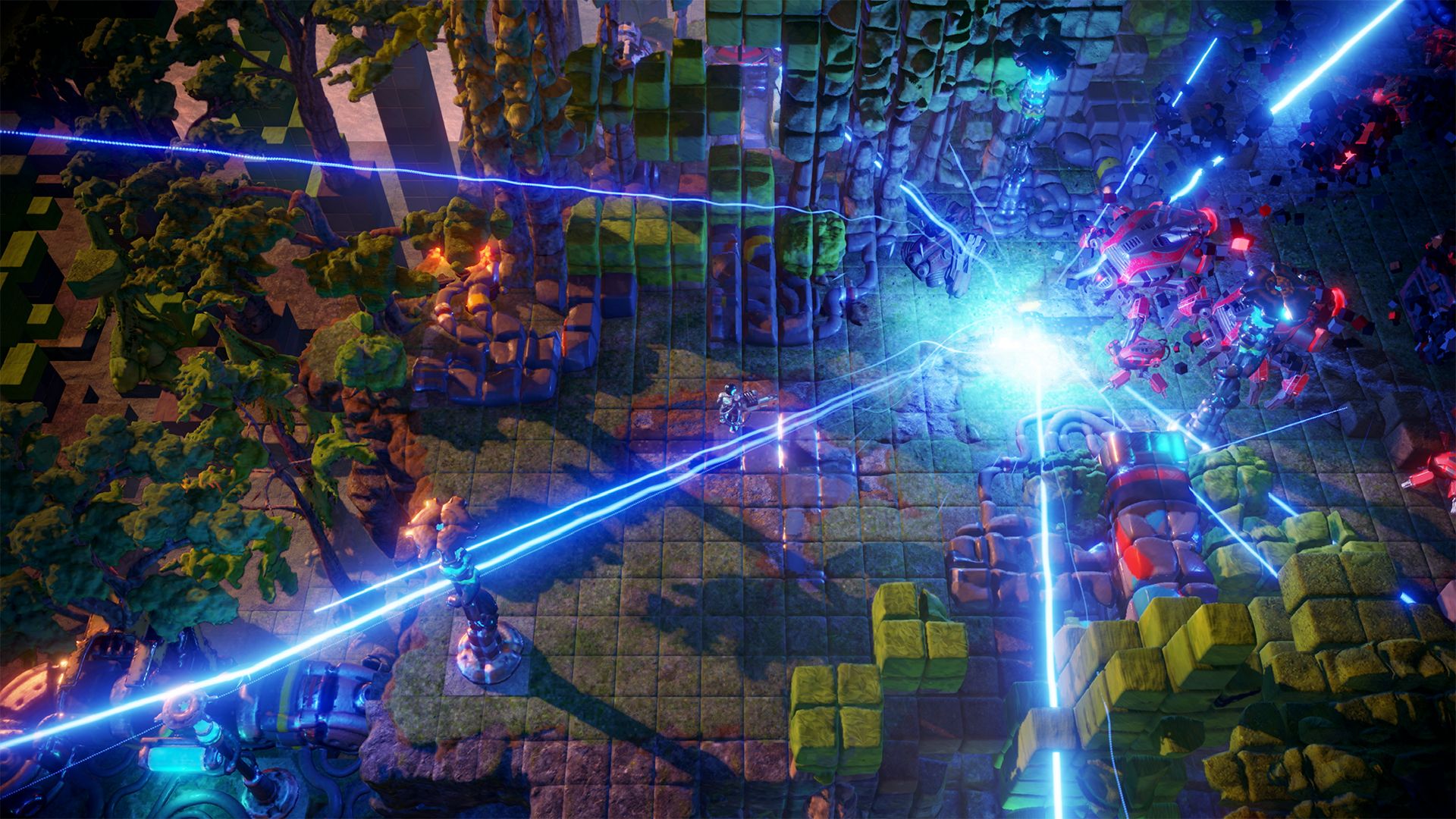 Controls are pretty standard for twin stick shooters. Beyond the normal movement directions, players can also dash after a short cooldown, granting them a quick burst of speed and invincibility. This will allow them to pass through the straight pink lasers, but not the braided lasers. Players have their primary weapon that fires endlessly and is modified by a variety of battlefield boosts. A secondary weapon pickup that rotates between a variety of weapons can also be found scattered across some of the levels, giving players a chance to find something that suits their playstyle if they are patient enough to wait out their preferred weapon.

Arcade is the standard mode, offering four tiers of difficulty. Players start at the very first level and attempt to progress through all six worlds. The number of continues available to the player will vary based on the difficulty level. If players are looking to hone their skills on a single world, then the aptly named Single World mode is available. Multiplayer is also available as local couch co-op. To unlock customization options or battle it out for high scores, players can try the Online Arena mode where specific challenges are laid out. Completing them will reward players with coins that unlocks new skins and colours. As an added bonus, players can also view the replays of high score runs on the same platform. It’s a great opportunity to bone up on some new tactics.  While Arcade mode is the bread and butter of Nex Machina, Online Arena is a interesting new way to add some extra replayability to the game. 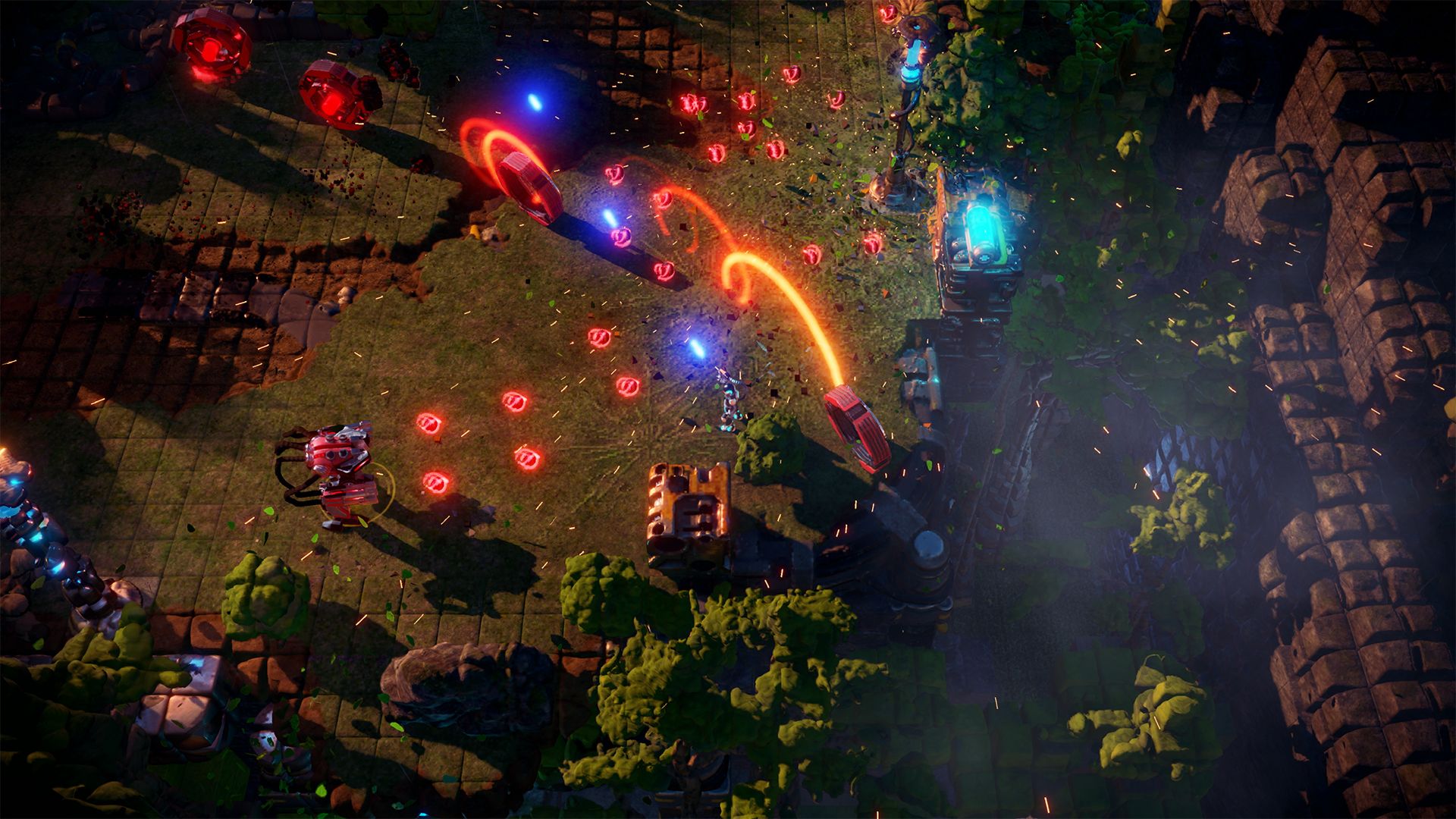 Nex Machina is nearly perfect and would probably have earned a score reflecting that if I was grading the game on the console. Unfortunately, the game’s PC version is a little clunky. The mouse and keyboard controls are just awful. Movement with the keyboard works well enough, but the mouse is terrible. In my testing, the gunfire has a weird habit of randomly hopping to the other side of my character instead of following the direction of the mouse. I am also pretty sure that the mouse controls only fire in eight possible directions while the thumbstick can fire at any degree in a circle. Binding keyboard and mouse keys work well enough, but switching from mouse and keyboard to controller is unintuitive and the instructions are vague. Most games will automatically detect when an Xbox controller is plugged into Windows and switch over. Nex Machina on the other hand needs players to manually switch the controls over, and it does not make it very clear that the player needs to hit tab to cycle the input type. I had to wade into the Steam forums to find that out from the developers, who admitted it wasn’t the cleanest of implementations.

If PC players can get their hands on a controller for Nex Machina, they will be treated to the same fantastic experience their console brethren are getting. The controller performs incredibly well. Everything is extremely responsive and the four button layouts are mapped to keep everything close at hand. I like the fact the shoulder and trigger buttons are automatically mapped to the same key. 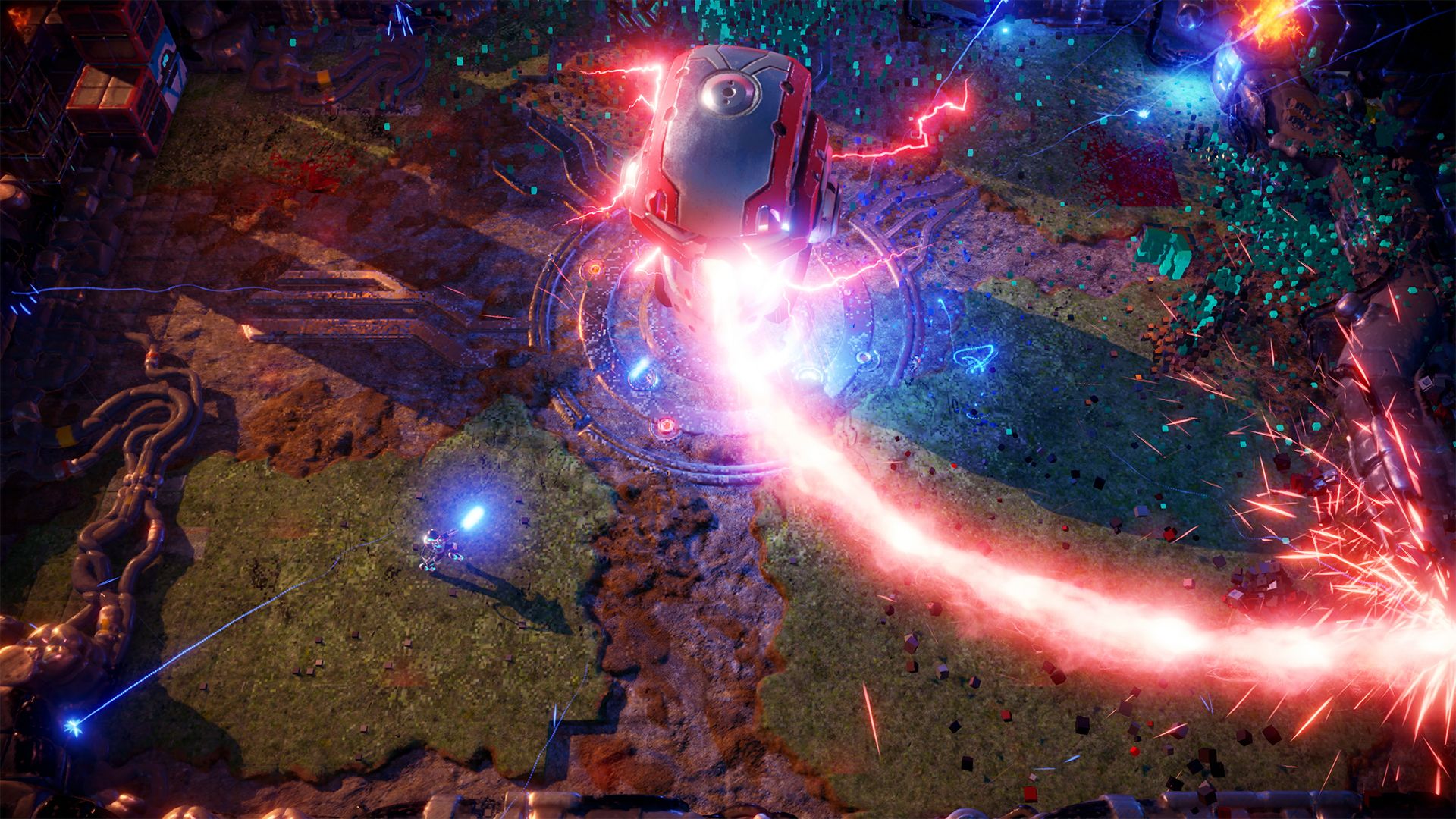 If Geometry Wars was all about presenting the twin stick shooter in the most minimalistic way possible, then Nex Machina is the antithesis of that mentality. The game is all about pushing the boundaries with cutting edge graphics and plenty of objects bouncing around the screen. The art style is a modern take on the retro alien robot design. Nex Machina is visually chaotic when the action gets going, but there is a beauty in the madness. The animations are fantastic, and the transition animations between levels are a special touch. Everything that is mechanically important is visually distinct, making it easy for players with sharp eyes to pick up on vital cues quickly.

On the technical side, Nex Machina has a minimum system specs that is worthy of its impressive graphics. Don’t let the twin stick shooter thing fool you, rendering all those flying objects on screen demands a lot of horse power. Surprisingly, the graphic customization options are a little on the thin side. 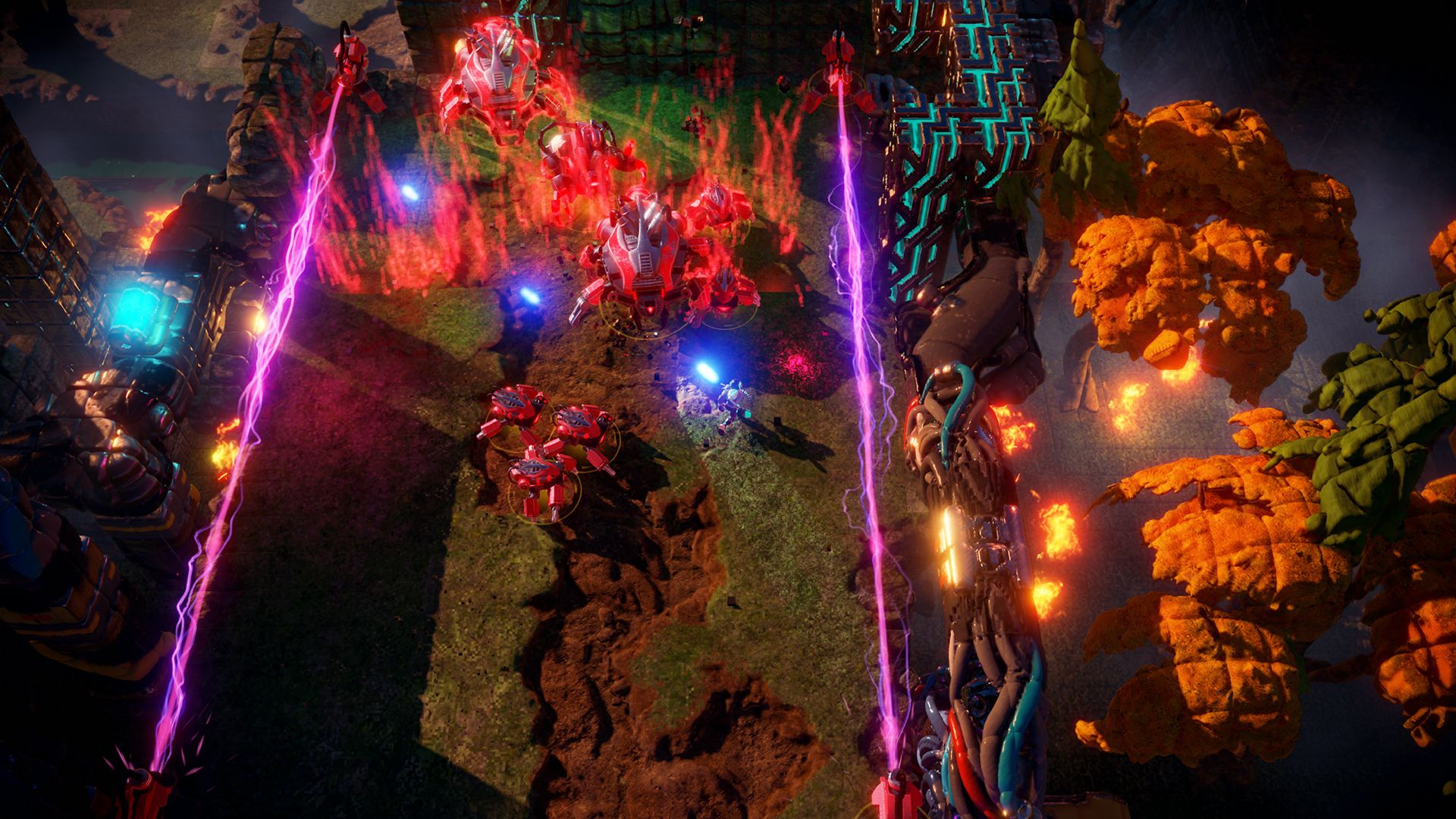 Nex Machina delivers a solid audio experience. The sound effects are excellent. The soundtrack is fantastic. It is filled with pulse raising dance and techno music that pairs beautifully with the games fast paced action. The bass and the gunfire seem to meld together seamlessly, creating an amazing rhythm for the game.

Nex Machina is a fantastic twin stick shooter. It features an excellent visual presentation and an amazing electronic soundtrack. The gameplay is tight and incredibly fun. There is plenty of replay value between the Online Arena mode and the mass of secrets to discover. It’s just a shame that the keyboard and mouse implementation is so awkward. If you are going to play Nex Machina on the PC, do yourself a favour and play it the way it was meant to be enjoyed: with a controller.