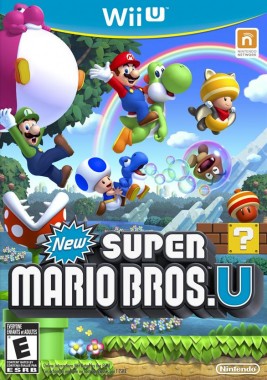 Overview
No matter what any other critics say, I will never believe that Mario has become a dull franchise. That is the stigma that has surrounded the plumber though. Throughout the past few years, Nintendo have stuck with the “New” series, relying on acts of nostalgia to keep their fanbase happy. Ultimately, a great divide has occured within the group, with half of the fans staying content with recent offerings, and the other half hungering for more, craving a new direction for the franchise. New Super Mario Bros. U, like it or not – is a special game. It is the first launch Mario game for the Wii U, and the next big step for the franchise. Of course the 2D platforming gimmickry still applies, but does this age old legend still have enough spark to capture a new generation? 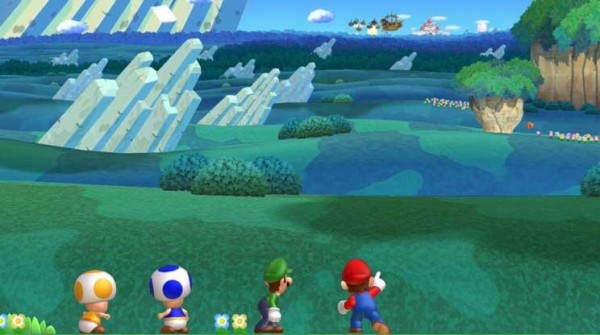 Story
I won’t spend a ton of time talking about the story, because you know what I am going to say. Mario and friends witness the kidnapping of Peach. After a bit of scuttling and minor setbacks, they then have to cross Mushroom Kingdom and defeat Bowser and his devious crew in order to pull off a rescue. Yes, we have seen it all before, time and time again. Is it time for a new plot? Well, if it were 15 years ago, I would have said yes. By now though, this narrative is kind of what the series is known for, and considering the “New” franchise that is crafted to tap into the player’s nostalgia bones, I don’t think I would have it any other way.

Gameplay
By now, we have all probably played at least one of the “New Super Mario Bros.” series. You should know how it works. Mario has to set out on a journey to rescue the princess throughout several themed locations, with each featuring a unique boss at the end. Each stage kind of rolls into the next, and there are plenty of power-ups, charm, and intense platforming to test the player as they make their way through each level. New Super Mario Bros. U carries on with tradition, but does so on a much grander scale, as everything about this title feels more inspired and vivid about what this game series represents. Of course there is nostalgic bits to remind the players that they are in a safe zone with the icon they grew up with, but this particular title carries itself with a burst of freshness, making it indeed feel as if the New Super Mario Bros. has turned a sharp corner. 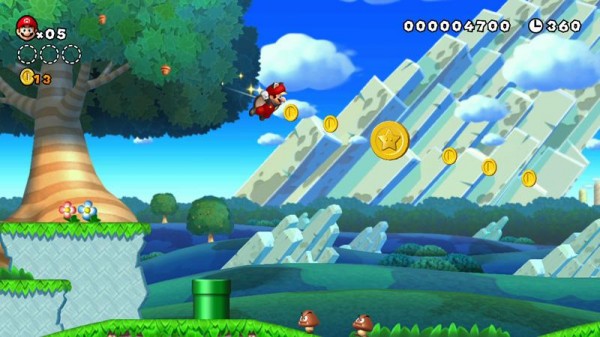 This is mostly due to level design. With Mario games of any sort, the player is always allowed to go at their own pace. Do we really do that? Of course not. These stages are built for quick platforming, and half the fun of the franchise is learning the design of a level and then trying to make it to the flag in record time. In New Super Mario Bros. U, the same concept applies, but can be met with a bit more excitement. Every death is a lesson learned, teaching the player that they should slow down when around hazardous obstacles such as slippery ice or burning lava, or speed up when the path is cleared for quick and fluid platforming fare. Of course the enemies play into this as well, as Piranha plants, Goombas, and Koopas run amuck on every stage, and must be dealt with while you head to your destination. There are more difficult jumps this time around, and many elements have been mixed up to throw the player off if the go in expecting the same ol’ 2D Mario. Rotating platforms and sudden pits will test the player’s reflexes, but never are too overbearing to test anyone’s patience. Yeah, seasoned fans will not have much of a problem – even with the new layouts, but newer or younger players will certainly get schooled in proper platforming 101 as they make their way through one of the most clever entries in the series. 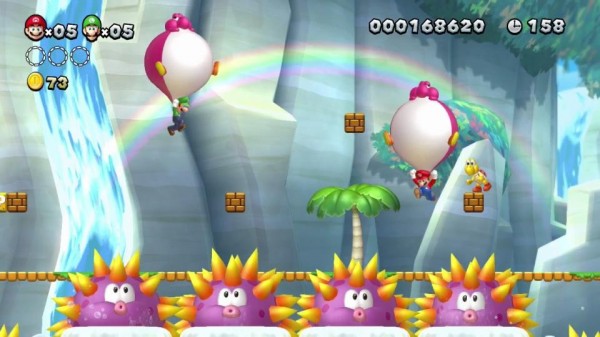 All of your usual power-ups have made a return as well. We have the standard fire flower, invincibility star, and even Yoshi making a return – ready to gobble up anything in his path. New to the mix are acorns, which turn Mario into the new Flying Squirrel Mario, who is able to perform a swift glide and a boost jump that can be executed with a shake of the Gamepad. At first, I wanted to put this ability off as a re-skin for Tanooki Mario, but the Flying Squirrel Mario seems to handle a bit more agile, and works much more efficiently when making long jumps across dangerous paths. The ice flower has also made a return if you like freezing things, but the star of the new techniques for our mustached plumber comes in the form of Baby Yoshi. These adorable little guys can be found throughout the game, and can be held to grant Mario a special ability. For instance, the pink Yoshi can balloon up and let Mario float, while the Yellow breed light up dim areas and scare away those dreadful Boos. The blue Yoshi is my personal favorite, as it can trap enemies in bubbles, which Mario can then jump on to cross gaps. On top of all these techniques comes the hunger of the young dinosaur, as these little guys will eat anything in their path. 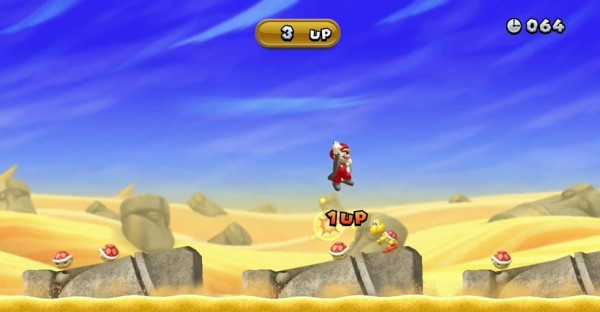 One of the biggest draws of New Super Mario Bros. on the Wii was the multiplayer, and thankfully – it has made a grand return here, featuring the two Toads and Luigi. Now, this works about the same as all characters share the screen together, and have to utilize a bit of teamwork to properly move on. For this, all players have to use the Wiimotes, as if the first player keeps the Gamepad, they will be put on block duty. Yes, that is the gimmickry attached with the touchscreen. One player will be able to tap the screen to add blocks while the other four try to survive until the finish. It sounds a bit dull, but when you see it in action, it’s actually a light, yet very clever idea. Sadly, I don’t really understand the point of forced Wiimote control in multiplayer if you want to actually play the game, as the Gamepad works just fine during the single player bouts. Sure, making blocks is fun, but having the choice to do so without getting those dusty controllers out would have been more ideal for this experience. 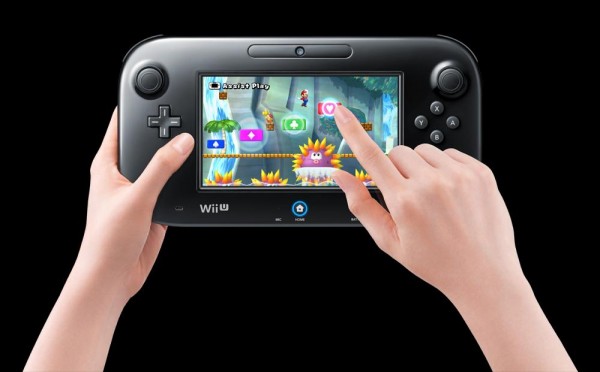 As far as accessibility goes, things are rather the same. 2D Mario games are never too challenging unless you go hunting for secrets. New Super Mario Bros. U does require some skill if you try to perfect every stage and get every special item or pickup, but those simply playing the game for the story (if those people do exist) will more than likely not find the kind of bone crunching challenge that other modern platformers possess. If things do get a bit too hard, the player can choose to let Luigi give it a go, with the green hatted brother literally playing the game for you to show how it’s done. This is completely optional and can be stopped at anytime, so younger players or those who are just flat out stuck should be happy to have the choice, while the veterans stay completely unaffected by this nice little addition.

Visuals and Audio
Mario has never looked better than he does in New Super Mario Bros. U. This was Nintendo’s first big trek into true HD, and they did not let it go to waste as U puts past Wii games to shame with it’s excessive amount of detail and color, allowing the entire experience to feel like the most magical Mario game that we have seen to date. Not only is it great in still form, but nearly every piece of the environment is fully animated, making the many worlds feel alive and oozing with personality. I kind of doubted how much of an improvement HD would be for Mario due to how well the game’s art design holds on even portables, but with New Super Mario Bros. U, Nintendo have set a benchmark of not only where the series is heading, but what the Wii U can truly display. 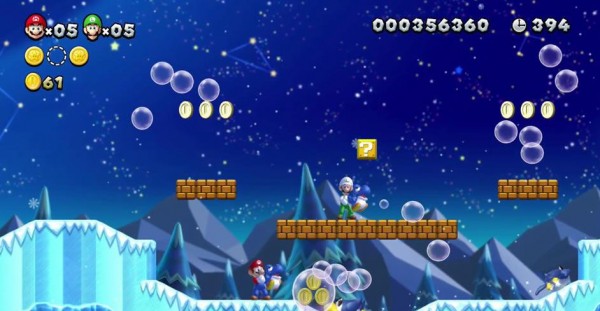 As far as the soundtrack goes, expect a few new tunes to quench your thirst, while the remixed classics keep them in good company for a nice dose of nostalgia. Whether you’re going through a castle or in a bright, sunshiney field, it’s hard to ignore the amount of character this world has due to it’s music that effortlessly syncs to the environment, and that alone makes this entry all the more special. One little addition that goes a long way is the Baby Yoshis role with the melodies. While you have one of these creatures in your possession, they will perform backup with the game’s music. Of course this is mind-numbingly cute, but it also creates such an endearing and joyous atmosphere that it can be hard to tear yourself away.

Overall
New Super Mario Bros. U is sure to go down as one of the best 2D titles in the franchise. Yes, it’s more of the same, but there is still just enough of that glow of freshness to keep the game enjoyable until that last locale has been beaten. The new abilities are quite clever and stamp this title with it’s own unique stylings, while the obvious inclusions of classic foes and past level designs are sure to please the crowd that enjoy their nostalgia. Nearly 27 years after first making his debut, Mario has went through quite a few changes. New Super Mario Bros. U is a well balanced compromise, aiming to please everyone, and executing this concept brilliantly. Sure, we are sure to see something better in the future, but for now – Mario has already made his mark on the Wii U with one amazing game that can stand as the first must-have on Nintendo’s new platform.