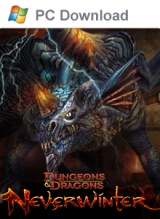 Overview
Ever since being published in 1974, Dungeons and Dragons has continued to grow in so many forms that the content is still enticing. Dungeons and Dragons does not care whether you are the old-fashioned tabletop player rolling multi-headed dice, avid fantasy reader, or video game addict because characters of all types are welcome. So the question begs how does Neverwinter deal with attributing to each of these important assets? Let’s see how this free to play title pans out.

Story
More-so the fantasy reader and gamer, I found Neverwinter’s story to be very appealing as I have encountered events that occurred prior to the game’s state. Though prior knowledge of The Forgotten Realms is not necessary in order to play the game, it definitely has its perks. Being able to recognize structures or places within Neverwinter as well as an enemy’s techniques can help during the initial encounter. For interests of both new and old D&D players, “Lore” is accessible throughout the story as interactive objects that detail past history of the world or given item. For those that like to forgo the storyline, you are able to skip such sequences and continue on your merry slashing and dashing ways.

Those more keen to old-fashioned tabletop playing are welcomed with open arms as the title features a dedicated portion entirely for creativity purposes. The “Foundry” a is map/quest creation environment that leaves the map’s imagination and objectives completely up to the player. By handing over the rights to become your own dungeon master through map creation, Cryptic Studios gave the public its own form of continual updates.

And my lovely book worms of The Forgotten Realms will be happy to hear/see environments of great renown such as The Underdark – the home of many denizens of evil – and Guantlgrym – the ancient city of the dwarves. With such places rarely seen and often imagined, it is refreshing to be given a visual perception to compare and contrast with book lore.

Gameplay
*It seems like you can never mention an MMO without conjuring up thoughts of Blizzard’s long-running Warcraft title. It’s true, nearly all MMOs retain some of the design decisions of WoW, but that game itself has even adapted over the years to suit its player base. Neverwinter takes several of the good design choices and uses them as a firm foundation.

*One of the most notable things to enjoy with Neverwinter (as with most every game) is the combat. Instead of a bar of a dozen or so different skills, though, Neverwinter keeps it far more concise. Once you full unlock all of your slots, you’ll have access to around 7 skills at a time, each with varying frequencies of use. This helps lend more weight to each of the skills you do have. You can thank the game’s adaption of the 4th Edition Dungeons & Dragons rules for this. While many holdouts will complain that the 3.5 rule set is far superior, Neverwinter’s implementation marks it as the right choice. 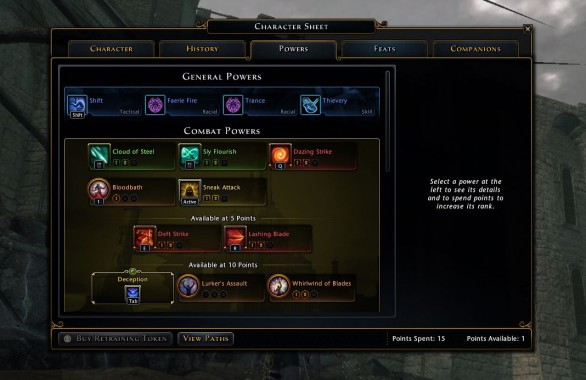 *Questing has been streamlined in Neverwinter as well. You can utilize a sort of “magic dust trail” that will lead you directly to your next objective. This helps keep you driving through the story material and gaining experience, so you never feel like you’re forced to grind. The addition of the “Foundry,” where players can create their own quests is also a wonderful draw for the would-be dungeon master anxious to try out his next quest on a slew of players. Neverwinter does a fantastic job ensuring the cream rises to the top with this, as well, promoting the best the community has to offer by putting on the front page of the quest seeker.

Beyond quests players can jump into queues for PvP domination matches, skirmishes, or even dungeon parties (no birthday cakes; only treasure!) Skirmishes and dungeons will measure your prowess against AI enemies while PvP matches are against other players. Skirmishes usually consists of a randomly queued group whose common goal is to defeat several waves of environmental enemies. Every wave proves more difficult as harder creatures step into the battleground to test the efficiency of the group – supply yourself with enough health potions if a devoted cleric is not close by. Upon defeating the final wave’s boss, a chest will appear for all of the team to loot individually. 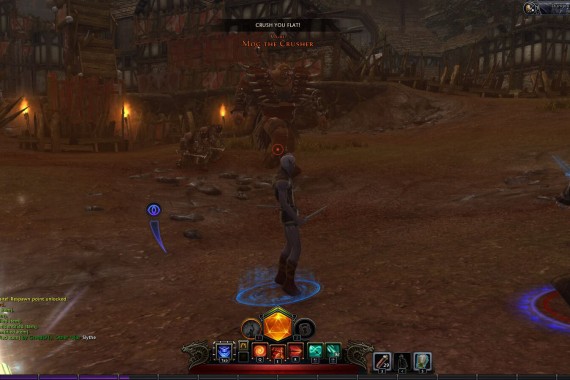 Dungeons take much longer than skirmishes as it can consist several mini boss battles and a final boss at the end. Since there are also more enemies placed in dungeons, the chances of attaining rarer loot is increased. Note that full parties are not required to enter a dungeon; however, I would highly advise tagging along with others if your are at the minimum level requirement.

A commonly confusing aspect about Neverwinter is in regards to its money system. There are three types of normal currency in the game: Zen, Astral Diamonds, Gold/Silver/etc. Zen is the premium type of currency that allows player to buy items with real world cash. Astral Diamonds can be farmed in crude from for daily quests/dungeons and then can later be ‘refined’ to regular form. The only reason that the ‘refining’ method was added is to ensure that people farming the diamonds cannot refine more than 24,000 daily. With the current market standing, about 40,000 diamonds can be traded for 125 Zen. Your gold and silver that you acquire through your journeys will enable normal purchases of profession materials, weapon, armor, and other basic supplies. Anything fancy will likely require diamonds or Zen to complete a transaction.

Visuals
Any good MMO needs to have an appealing draw towards character creation. Neverwinter is successful in this aspect because it offers customization to further individualize a character. Most important is that the creator is able to actively view and update changes throughout the process. Not happy with making the character’s race an elf? Start over by creating a dwarf (the best race of all). Combine race with facial identifiers like tattoos and scars, and you have quite the custom package to choose from. 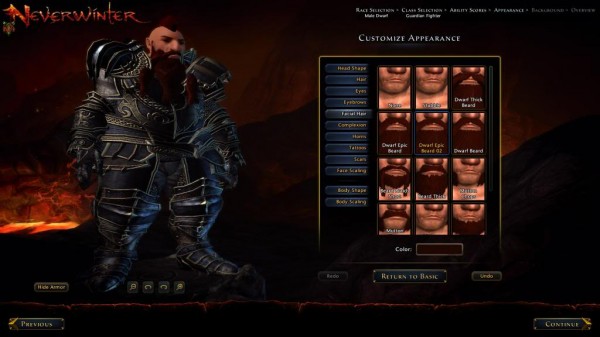 Aesthetically, the title could be spritz up a bit to compete graphically with other modern online titles. Though the graphics are not as high quality as other MMOs, Neverwinter still yields a plethora of scenery that keeps a player interested. You will be dredging through sewers, volcanoes, vaults, and even a dreadful place known as The Underdark. More enemies and traps lie before you -rest assured!

Audio
*Neverwinter also has fantastic sound design. The music always seems to match the mood of the situation marvelously. You’ll even find yourself sitting in the hub world just to hum along with the tunes. The voice over work is nothing spectacular, but each quest giver has spoken dialog that will do a solid job drawing you into the world. The sounds effects were also well captured and implemented, evoking the feeling of a crushing blow or the eery atmosphere of a dank dungeon well.

Overall
What are a few things to consider? Competitors may have a more beautiful atmosphere, but in regards to interactive gameplay and custom user-created content Neverwinter has the edge. Also, this title is free to play whereas other MMOs may have you pay $30 – $60 plus a subscription (that slims the selection down quite a bit).

*Overall, Neverwinter is easily worth a try. Though there’s payable content there for the ones that choose it, you can still have an excellent time playing the core of the game. With great quest structure, quick, solid combat, and evocative sound design, anyone interested in the world of Dungeons & Dragons or MMOs would be remiss to pass this one by without giving it a try.