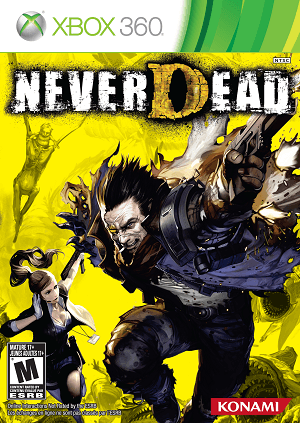 Overview:
Being completely invincible and never being able to die can have plenty of perks and most people would probably wish they could have that exact ability. While this may seem like something amazing, what happens hundreds of years down the line? Obviously a lot can change in that length of time, especially ones perception of life.

I mean, when you figure out that you can simply throw your head around like a bowling ball immortality must be getting quite boring. On the other hand, you could also create a video game focused on using the main character’s immortality as the focus point and built an entire game around that unique mechanic. Such is the case with NeverDead.

Story:
Bryce Boltzmann was once a chivalrous warrior who set out to slay the demon king and save the world from demon invasion over 500 years ago. Unfortunately he was unable to complete this task and has been cursed with immortality. Now he lives in the modern day world with nothing to live for besides the bottom of a beer bottle. 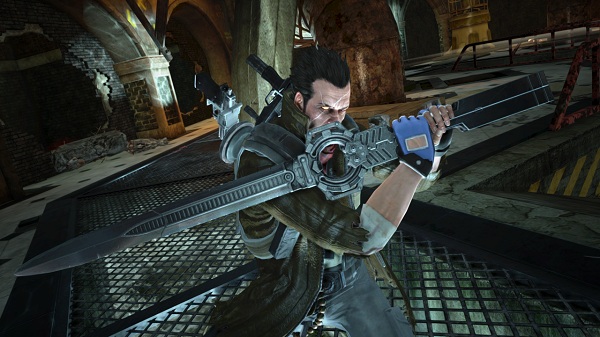 When Bryce isn’t whiling away eternity in a drunken state he works for the NADA, also known as the National Anti-Demon Agency, a branch of the United States government that handles attacks from the supernatural forces that the demons can unleash upon humankind. While usually tasked with defeating small time enemies, the attacks have grown more frequent and the enemies stronger. All of these attacks are beginning to form around an up and coming pop-star named Nikki… What can she mean to these demons and can Bryce finally find revenge against the demon king who cursed him half a millennia ago?

One would expect living for 500 years would leave one with quite a lot of experience with the world… so much in fact that it would turn a person into a jaded bitter shell of a man. In the case of Bryce Boltzmann we don’t quite see a shell of a man, but we do see one who is more than eager to make wisecracks about the people and the world. He is cynical at the best of times; however his personality can tend to be a bit grating at times, usually due his love of repetitious one-liners and can come off as completely unlikable at times.

While Bryce may be immortal, the NADA has seen fit to team him up with a female partner who is not. Her name is Arcadia Maximille and she serves as the cattle-prod to keep Bryce in-line and on-task. Arcadia can provide a decent amount of comedy herself through her interactions with Bryce but can be seen as an odd inclusion for a war where immortals can battle against demons. 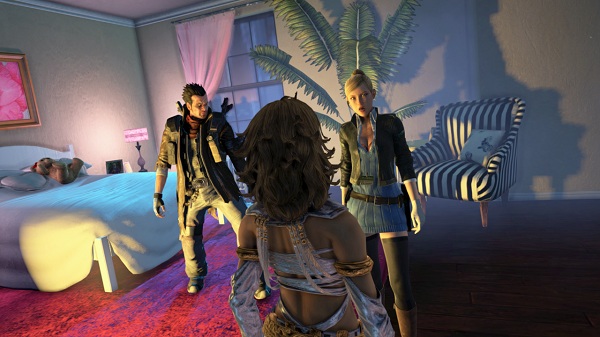 As a whole, NeverDead’s storyline will not take hold of any gamer holding the controller. The story development is a bit predictable and nearly the entire story is withheld until near the end of the game, so gamers shouldn’t expect to see too many unexpected twists thrown in here. That being said, it is at least original and can provide plenty of laughs throughout that length.

Visuals:
Now any third person action title requires a multitude of different enemies to face off against to keep the combat interesting and provide challenges for the player. Unfortunately there really isn’t a whole lot of variety to be had in NeverDead. At most you will be facing off against the same enemies hundreds of times with only a couple of new additions throughout the entire game. The character models are a bit better, with each of the characters in the game containing a unique look of their own, though the ragdoll physics of Bryce’s body seem to be greatly exaggerated at times.

Throughout the game you will travel through a number of varied environments but each of these levels feel dull minus the Museum level near the start of the game. One would believe that the potential for immortal flashbacks would also provide plenty of interesting stages to battle on, however that is not the case as there are only a scant few flashbacks and these suffer the same lackluster level design as the rest of the game.

Audio:
Considering this is an action title it should come as no surprise that there is plenty of heavy rock music to go along with the action on screen. The music is at best suitable, but never goes beyond that point and most will simply ignore the fact that it is there altogether as it leaves no lasting impression whatsoever. 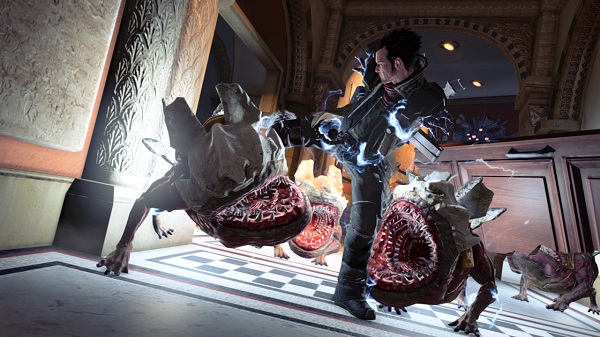 For the most part, the characters in NeverDead are given a decent voice acting cast. Arcadia and Nikki’s voices sound suitable enough, though Nikki’s voice isn’t one you would really attach to a pop-star. Bryce’s voice actor provides a suitable job with his personality, which is good because you will be hearing Bryce repeating the same lines over and over again throughout the entire game. This is so bad in fact that there are a number of times you will hear him state the exact same catchphrase three or four times in the matter of a minute.

Gameplay:
The focal point of NeverDead is the fact that you are playing as a man who cannot die. Instead of taking damage and hurting a health meter, Bryce’s body can be quite literally torn to pieces, with his head and limbs coming apart from his body. To top all that off, if he loses a body part forever, even his whole body, he is able to regrow a new one within a matter of seconds.

To avoid being torn apart Bryce will dispatch his demonic foes with a variety of firearms and his trusty sword. Bryce is able to use two guns at any time and these range from your standard pistols, to machine guns to even grenade launchers. These guns are best for long range enemies, however even with upgrades applied through unlocked skills; the guns are very weak and will likely not be used for most combat. 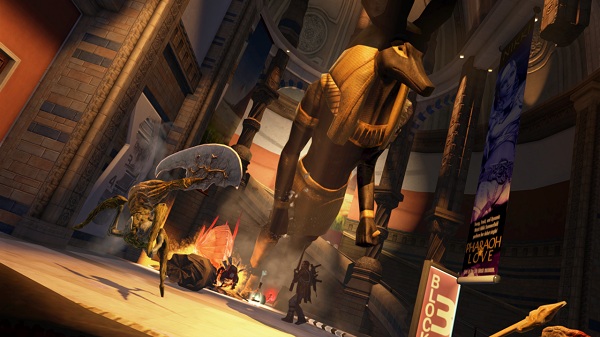 Instead the player will likely be using their sword as their main weapon. Unfortunately, the sword is controlled through an unwieldy combination of holding LT while swinging the sword with the right analog stick. This control system feels very hard to use at times and is very disappointing as fluid control over how you swing your sword would have made the combat much more interesting and simpler to use.

When you do happen to take damage however, and you will, poor Bryce’s body cannot withstand an attack of any kind. In fact even the smallest blow will cause a piece of his body to fly right off of his body or sometimes just shred him into a pile of limbs without too much effort. There seems to be no correlation as to what limb will be severed at any given time, as enemy attacks only need to land for a body part to fly off. This will leave Bryce either hopping around, crawling or rolling around depending on what limbs he has lost, though firearms can still be fired from severed limbs which is an interesting addition.

For simple limb loss the player can perform a dodge roll to re-attach the body part or can grow it back after waiting a few seconds. Unfortunately one of the body parts that will nearly always pop off is your head. When your head has been severed you will be forced to roll around until you can rejoin your body at the neck or wait to regrow the entire body. It is at this time that players can experience one method of game over through a certain enemy known as a Grandbaby. Grandbabies are all over the various levels and they will eat Bryce’s body parts. If one of them happens to eat Bryce’s head the player must perform a quick-time-event or be given a game over screen as they are held within the Grandbaby forever…

The only other way to lose in NeverDead is whenever the player has to protect their A.I. partner Arcadia. Arcadia seems to have very poor artificial intelligence as she will usually provide very little in the way of support and she has practically zero survival instinct, willingly charging large enemies, speeding trains, explosions and more. If the player does not revive her fast enough she will die and the game will end. 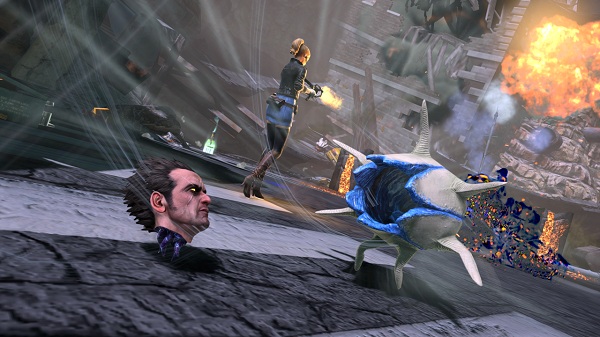 Considering the player cannot die and there are only a few ways to Game Over, expect to see quite a lot of hefty combat with a lot of enemies and environmental destruction. Unfortunately destruction seems to happen exceptionally easy, with entire walls and pillars breaking easily with brief combat sequences practically leveling a city block, as if the world itself is held together with the same balsa wood that seems to hold Bryce together. Bryce seems to be dismembered way too easily, leaving it so that players will be spending nearly all of their time rolling around on the floor for their body, which is often positioned in a way to not re-attach your head rather than fighting enemies.

Still, being that Bryce is immortal he has a few ways he can exploit this for his advantage outside of combat. There are a number of various environmental puzzles that Bryce will need to, literally, yank his own head off and throw to interact or reach certain places he couldn’t before. Unfortunately rather than create a large amount of unique puzzles, the same pattern is re-used again and again throughout the title. This is also used heavily for finding collectibles that can be picked up to acquire XP which can then be used on skills.

As players defeat enemies and find the aforementioned collectibles they will gather XP that can unlock skills that range from upgrading damage, allowing Bryce to blow his limbs up, jump higher along with a number of others. However the amount of abilities you can apply at once is restricted with ability slots which seems like a poor choice given the fact that a man who has been around for 500 year should be the ultimate demon slaying machine bar none. 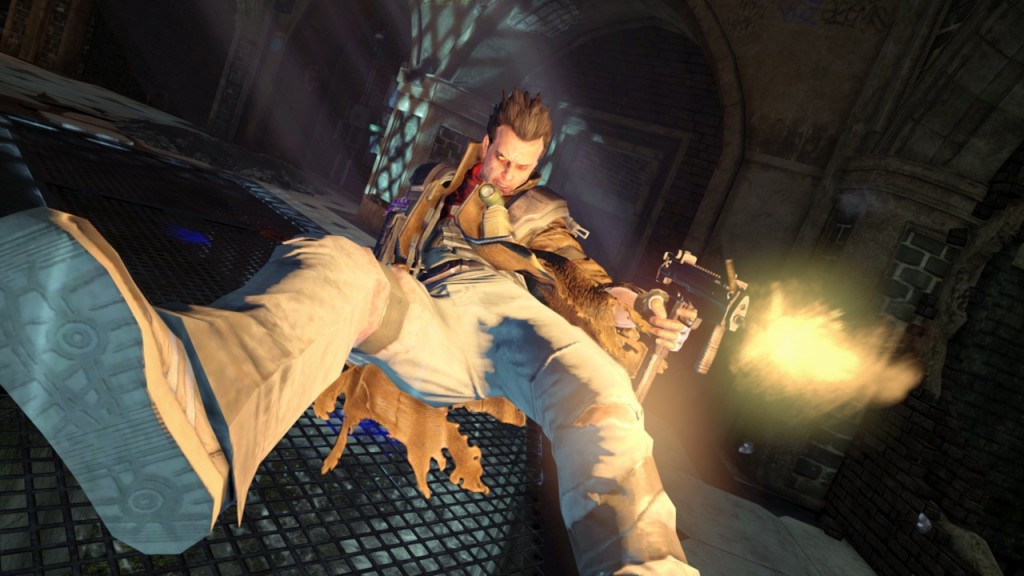 It is also worth noting that NeverDead actually contains an online multiplayer mode. Online players can compete against one another in challenges or take them on cooperatively through a number of little challenges. Unfortunately there are only a few people available online to play against and the modes provided are severely lacking in longevity and enjoy ability.

Overall:
When all is said and done NeverDead has a lot of potential. An immortal main character will certainly pique most gamers’ interest however there are a number of problems with the title that nearly all culminate with two words. Untapped potential. There are a lot of things that could have possibly gone right in NeverDead, however none of it does. With a lacking storyline, extremely repetitive and clunky combat and a character that could probably hold himself together better with duct tape NeverDead can still provide a unique experience, unfortunately it is one marred with so many issues that it is no surprise that Bryce finds himself at the bottom of a bottle every day.