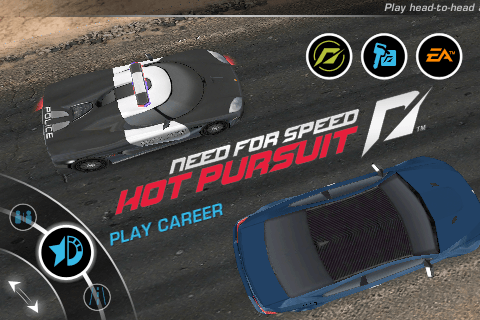 Apart from Mario Kart, I’ve never really been a fan of racing games. I was never any good at the arcade style racing games when I was a kid, and stared on in disbelief as I continued to ram my car into a wall while all my peers and computer generated racers passed me by over and over. This trend continued into my early teens, where at friends houses I would embarrass myself with my poor attempts at virtual driving on PC, Nintendo and Playstation consoles. I’ve always attributed this to my extreme lack of interest in motor vehicles. Despite my long history of not enjoying racing games, I’ve found Need for Speed: Hot Pursuit to be nothing but enjoyable. 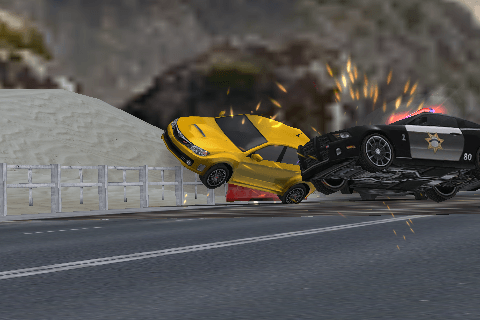 I’m sure it goes without saying that Need for Speed: Pursuit is a racing game. I mean, the name says it all. There are two career paths to choose from, either a cop or a racer, both with different level types fitting your chosen path. Similarly, there are different cars to be earned through the collection of bounty points in both careers. Stars are awarded based on how well you completed the level, with three stars being the best and earning the most bounty. A feature I really like in this game is that if you repeat a level or even fail a level you still earn bounty. Obviously if you don’t complete the level you aren’t awarded the allocated bounty, but you can still earn something. This comes in handy when you get stuck on a level and is a great way of boosting your overall bounty and unlocking new cars.

In terms of controlling the car, I think the game does a fantastic job. Taking advantage of both the racing narrative and the iPhones gyroscopic technology, you need to hold your iPhone, preferably with both hands at two and ten positions, safety first! Once you have a firm grasp on your iPhone, you can tilt it left of right in order to control the direction of the car, while also occasionally swiping your finger on the screen to either implement a nitro boost or the hand break. 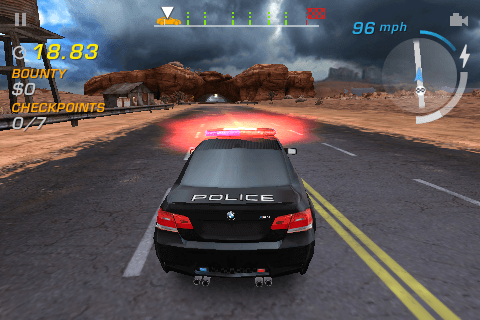 Within the different career paths, there are level types specific your chosen drivers standing in society. Not to mention boosts to help you achieve these goals. Within the street racer career, most of the levels revolve around going fast and avoiding the police. The first type of level is ‘Road Race’. This is basically a straight up race between you and three other hooligans. ‘Hot Pursuit’ involves out smarting and out driving the police within a certain time frame. Within the racer career, this is definitely my favourite of the level types. It provides the most challenge and has the strongest and most engaging narrative. Not to mention, if you ram the police car it will crash and provide a spectacular cut scene! But I’ll discuss this in more detail later. Other levels include ‘Eliminator’ where the car in last position is eliminated when pass through a check point and lastly is ‘Speed Trap’ where the goal is to go as fast as possible through a check point to accumulate a speed score in order to gain bounty. Overall, I find the racer career a little boring. As I said, I grew up never being a fan of the racing genre. I think this is purely because the goal of placing first in a race isn’t enough motivation for me.

If you prefer to fight for the side of justice, then maybe the cop career is a better suit for you. Like the racer career, there is a straight up racing level type. ‘Power Struggle’ pits you against three other police officers in a race. For a different way to experience speed, ‘Rapid Response’ tests your driving skills, having to get through check points before the timer runs out. Heading into some of my preferred level types, ‘Interceptors’ main goal is ramming some punk speed racers off the road. Of course this needs to be done within a certain time limit in order to qualify for the highest amount of bounty. If stopping one racer from breaking the law isn’t enough, then try out a ‘Tough Justice’ level. Here you are given the opportunity to knock a number of racers off the road within the time limit. The more you take off the road, the hirer the bounty. I feel that the last two of these level types are the most engaging and goal driven in the whole game, and I’ve found myself replaying the levels over and over trying to get three stars in all of them. Or maybe I just have some road rage that I need to vent. Either way this is easily the best part of the game. 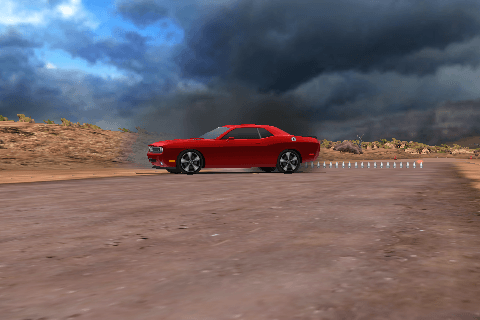 Without a doubt, Need for Speed: Hot Pursuit has the best cut scenes I have ever seen on an iOS based game. Whenever you destroy a car, be it from ramming it into a wall, a roadblock or laying down some road spikes, the game stops and there is a very cinematic cut scene featuring a crash. Most often, the car will flip over in the air and it is just spectacular. The graphics during game paly are up to the same standard as the cut scenes, but obviously it is all a bit fast paced and you tend to not really notice how much detail has actually gone into the landscape and the cars, especially some of the later cars you earn. 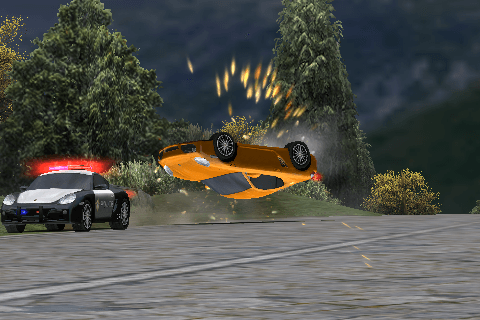 The audio is fairly typical of a racing game. It has fast paced music, roaring engines and due to the police verses racer theme is littered with police sirens. At times, I think it is all a bit much, but I’m aware it is just a convention of racing genres and I have learned to tolerate it. On the plus side, it is an iOS game and the sound can always be turned off. Having said, and also done this, you really notice the impact the sound has on motivating you to speed like you’ve never sped before, proving that while it may be all a bit much for me, the soundtrack for Need for Speed is an integral part of the game.

Bringing all the elements that make a good racing game, mixing them up to create new, more engaging and interesting elements, I think that Need for Speed: Hot Pursuit has anything a contemporary racing game should have. The means of controlling your car while racing is innovative and engaging, sure it might not look so cool on a bus, but I love the fact that it’s attempting to simulate a steering wheel. Overall, Need for Speed: Hot Pursuit has fantastic graphics and some highly innovative game design. A must for an iOS owning racing genre fan.