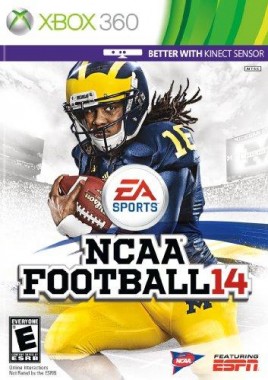 Overview
Each and every year, EA release the next best for the long-running NCAA franchise. The brand has done well to represent college football, but with aging hardware and features that typically run behind its Madden kin, the age old franchise is starting to show signs of rust. This year, NCAA Football 14 introduces some brand new aspects to the game, with the Infinity Engine 2 headlining the experience. Does this entry end out a generation with a bang, or is this yet another step in the middle for a brand that is still trying to define itself? Let’s find out.

Gameplay
I don’t have to go into the gameplay for any EA Football game to much, as the same formula has been in tact since the days of sixteen bit. Sure, if you go pick up NCAA from ten years ago and then try out ’14, the experience will feel the same. EA Sports don’t really make these titles for the casual player however, and hardcore fans that pick up every installment are sure to notice many subtle changes and additions to this year’s entry. The Infinity Engine 2 brings the popular Infinity Engine that graced Madden to NCAA Football this year – with some extras included. 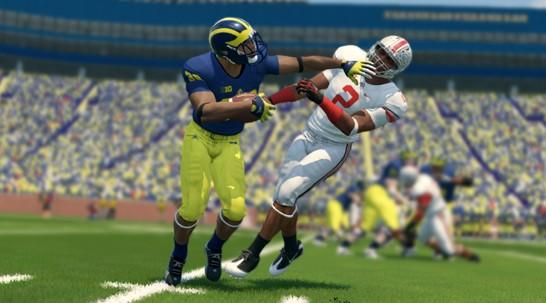 To give a bit of perspective of what this physics engine brings (or brought considering its introduction in 2012), the Infinity engine introduced weight and momentum into the game, allowing players to have greater force behind their sacks and if running or charging, not to be tackled down nearly as easy. It made for a much more realistic approach, and this marks the first NCAA Football title that has seen this physics engine introduced. There is a big “2” labeled on that this time around though, meaning new features have been implemented to make the experience even more polished. The Force Impact system enables collisions based on factors such as speed, bursts of momentum, and the general mass of the player. For instance, you won’t be able to sack a player at the tap of a button if they are bursting through the field, and for defense, the opposing player will have to put more effort into taking down a player as they run to the goal line – ball in hand. It isn’t the most noticeable upgrade, but it does make the Infinity Engine hold greater merit and effect more outcomes to game – which is a massive plus considering how stale the gameplay has gotten over the years. 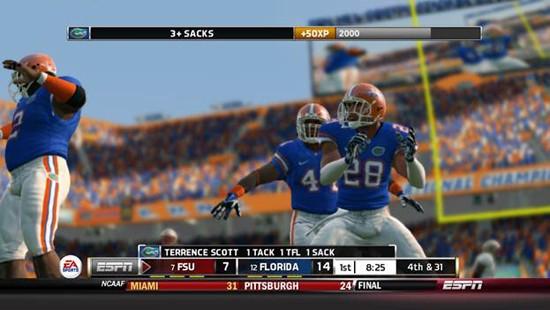 There are a few other minor additions with the gameplay, but the most noticeable are tweaks made to the defense. The AI has gotten slightly better in some areas (though there are still a few glaring moments of stupidity), meaning the player has to put forth more effort in coming up with an effective strategy to maneuver around the other team’s defense. Using the right stick can allow the player to bounce back on their feet during running plays, and a new burst mechanic can offer a large change of speed to plow through the the defense. Again, it isn’t a lot, but enough to warrant a bit of merit. Over the years, EA have attempted to make this franchise and Madden more about simulation, stripping out many of the unrealistic gameplay elements that just didn’t click with the sport. NCAA Football is the closest we have seen to the real deal, event with its shortcomings and minor hiccups from time to time. 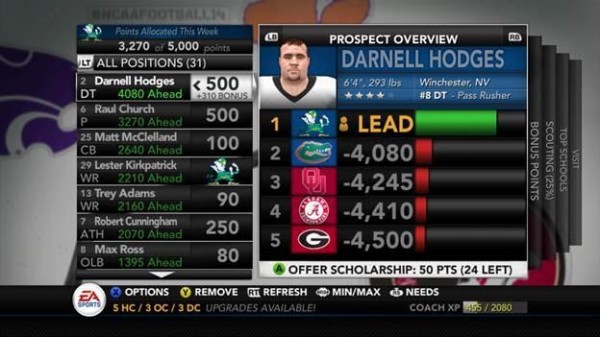 Off the field, there is still a large amount of content to be explored. Ultimate Team is now gracing the college sport, and while the card collecting is still addictive, more has been added to give this mode a bit of new life. A season mode can be accessed for players can take part in a 10-team tournament of sorts, with higher stakes added afterwards. The currency system allows players to get more coins by completing challenges and selling off unwanted goods, and thankfully – all of this menu navigation is rather to the point and more accessible than it was in the past.

Dynansty Mode has also seen some improvements, bringing the “RPG” like progression system into the game of coaching. Coach Skills act as abilities of sorts and allow the player to utilize one of eighteen abilities that can all be leveled up as the player progresses. These skills can be found in two different trees, with the first being Game Management. This set of skills effects your team’s general morale, and allows your players to keep their cool when on and off the field. The Recruiting skill tree is a bit more to the point, and allows the player to have better odds when it comes to recruiting. It is a bit odd to see this all come into effect during a football sim, but the tools given to make this mode enjoyable do their job well and even if football isn’t quite your thing, the constant upgrading, recruiting, and coaching fare is enough to keep you busy for hours on end. 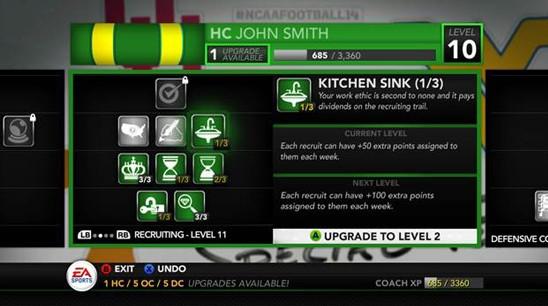 Since there are so many changes, a “Nike Skills Trainer” has been placed on the main menu, but being honest, I just didn’t feel the need. Sure, there was a lot of developmental effort to make this tutorial act as something more, but at times – I was a bit curious of what better usage of space could have taken its place. I mean, there isn’t any doubt that this franchise has seen a fair share of changes, but when you are on the field, the action still is familiar and easy to pick up and go. Those who want to know the details of the sport however are sure to find some useful information to improve their game however, even if the mode is a bit overkill as far as a tutorial goes.

Visuals and Audio
How many NCAA Football titles are we up to for this generation? Well, quite a few is the answer – and sadly, the visuals have officially peaked. Throughout the years, EA have detailed it all on the field, making crowds, arenas, and even dreadlocks more animated. The players themselves look fine, animations are fluid, but the game itself just doesn’t feel like a new experience based on the visuals alone. Now, I don’t know how they could make changes without them being drastic, but NCAA Football 14 is in dire need of something it just can’t have, and that is a proper next-gen coat of paint to go with mechanics that truly are starting to push the series forward. 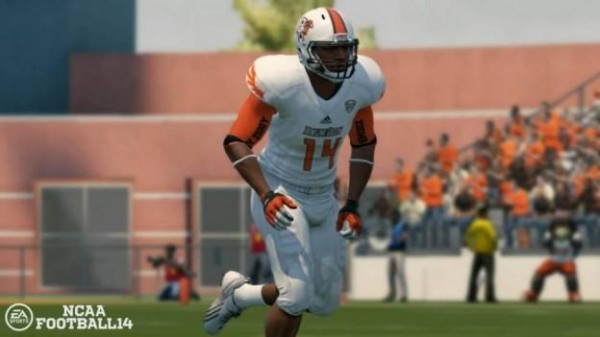 Audio wise, it is kind of hit and miss. The soundtrack is basic and nothing new, the chants are loud and make situations more exciting, and as always, the commentary is rather bad due to missed calls and stale voice work. If you watch a college game on the television, the commentating is still a bit dry, but as plays happen excitement is heard – and that is something the play-by-play here just doesn’t have. The physics engine is also effected in a slight form due to the sound effects, as it sounds a little less satisfying when a collision is made on the field this time around, and that moment of gratification is something that has seemed to be replaced by softer, more realistic effects. This is more personal preference, but it is ok to still have some arcadey moments in a football game, as it is still a game at the end of the day.

Overall
NCAA Football 14 is an aging player that still wants to pull out trick cards in order to squeeze out a few more years. The problem is, the changes are subtle, and while the full turn to simulation is a good thing for fans, there isn’t a ton of incentive to throw down last year’s installment aside from a revamped physics engine. Sure, Infinity 2 is fantastic, but with dated visuals and audio effects that are just not up to par with the gameplay, I still feel as if this is yet another installment that takes a step back right after making a giant leap. There is still a well refined football game at the end of the day however, filled to the brim with content – with fan feedback accounted for in several ways. With next-gen consoles on the horizon, EA are ready to turn the page – and NCAA Football 14 is a soft yet suitable ending to a brand that changed the game.