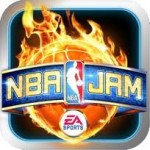 NBA Jam is probably the best NBA game to be adapted to the iOS, given that it looks like an app to begin with and the graphics don’t call for much. Still, NBA games always tend to be pretty fun so let’s see if this app lives up to the fun of the rest of them.

NBA Jam is fairly basic in idea, it is 2v2 transplanting players from the respective NBA teams. There are no out of bounds, no fouls, pretty much not a lot you can get in trouble for except goal tending (which I have no discovered is when you hang around the hoop and block from there). Being called up for goal tending was one of my big pet peeves, because the damn goal circle is tiny to begin with so goal tending is almost impossible to avoid. Or maybe I’m just bitter. 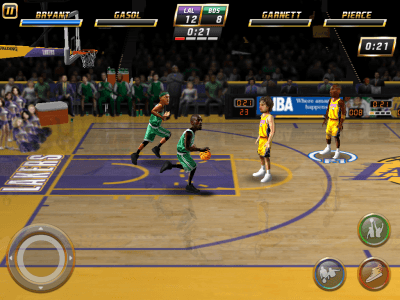 The controls for NBA Jam follow the standard EA sports format, which is the d-pad on the bottom left corner and the shoot-pass-sprint controls on the bottom right. These three options change if you’re in the defensive position to block-steal-sprint. The controls are easy to use, with the angle and dimension easy to handle. 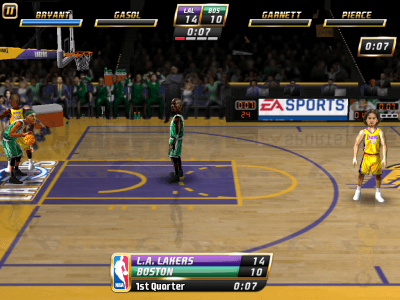 You can sub in players halfway through the game if you want, although the fatigue wasn’t super noticeable and I doubt would make a huge difference. So the reason for it would probably be to get the ‘real NBA experience’.

There are only two modes of NBA Jam, ‘Play Now’ and the classic campaign. In ‘Play Now’ mode you play a game where you pick the two teams. Classic campaign has you playing one team through an entire season, which includes 37 levels. Campaign mode actually repeats the team you play, because you play within a certain are of the league. There are also 46 challenges which you can fulfil by doing things such as playing a game against the PC without shoving (gentleman award) or making a certain number of blocks/slam dunks in a row. 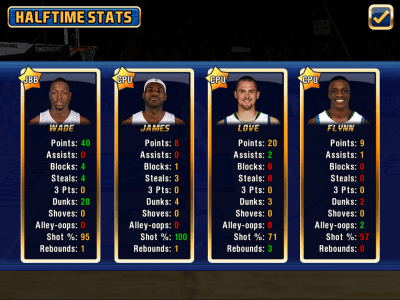 There are four difficulty levels, Rookie, Legend, All-Star and Veteran mode so it all depends on your skill level. Rookie level is more than suitable for a beginner and Veteran is certain to be at least a little challenging for the experienced player. As someone who started with basically negligible NBA Jam experience, it allowed me to get accustomed to the controls, learn tactics, and eventually be ready for the bigger leagues. 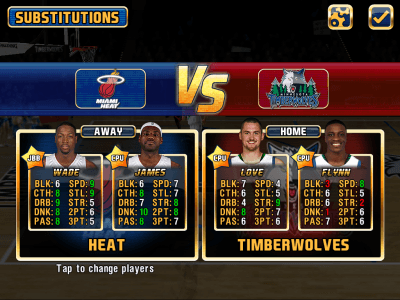 Now I’m not too knowledgable when it comes to NBA players or teams or whatnot, but I picked the Miami Heat (cos of all the flames, get it?) as my team and usually played with whoever was thrown at me. I don’t think the players made that much of a difference, especially since most of the time we spent slam dunking and that didn’t take too much skill on the part of my players, just capitalising on opportunity.

You unlock players as you go in the classic campaign, but for those of you who don’t want to wait for that you can always make an in-app purchase to round out your team players.

The NBA player avatars are designed as having standard bodies and giant bobble head pictures of the NBA players which have two settings – normal and crazy happy. This cartoonish quality continues to the rest of the game, the arena, and even the estimated representations of the crowd.

There were a couple of glitches with the player shoes and the ball here and there where they turned to a solid colour that the models were based on. They were small glitches and didn’t really affect the game itself, but still. 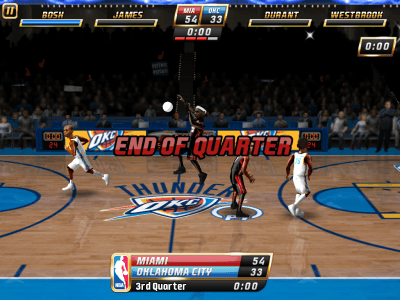 The audio has the soundtrack of an old school jam, which is kinda catchy for the first couple of minutes but gets repetitive and old after a while. I found myself turning the game to silent not only because of the soundtrack, but the commentary. Sports games are hard to have different and unique commentary going, I fully understand that, especially with iOS games. For some reason it was more noticeable with NBA Jam, maybe because there is a smaller range of plays than in other games.

NBA Jam is a fun little app, with the bare bones of the NBA franchise, but feels a lot more like a mini game. The gameplay is easy to adjust to, and can cater for a wide range of skills. However, the app is more for NBA fans who will take great joy in playing with their favourite characters (no suss). There isn’t a whole lot to the game, once you finish the campaign (which shouldn’t take very long), there isn’t anything else left for you to do, unless you want to make sure you finish off any challenges you haven’t already.

I give NBA Jam