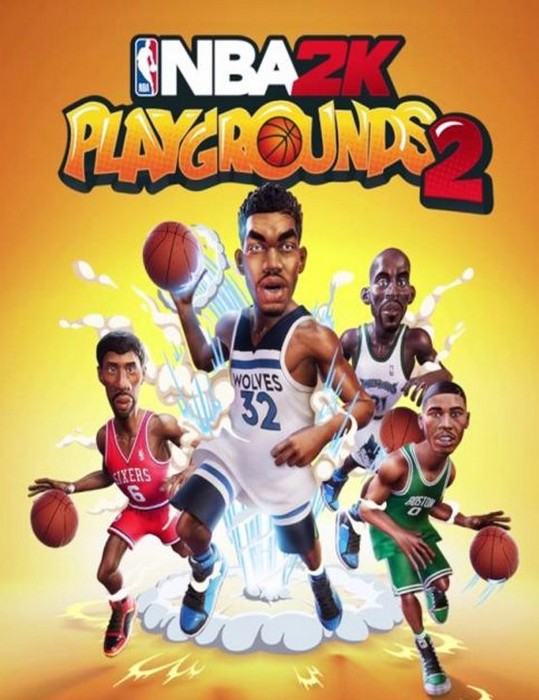 I’m going to be honest with you: I’m not too big on sports games (what a terrible way to start a review, right?). I avoid it in high school whenever I could so I guess it passed onto games as well. The only exception is when a sports game stops to take itself seriously and goes all in with absurdities. For example, I remember one crazy soccer game from SEGA era where all the soccer teams had special moves and could tackle & hit the opposing players. The German team had a special move that would turn the ball into two sausages, the Argentinians would shoot it at the goal underground and so on. It was crazy but crazy fun too. The first NBA Playgrounds had real caricatures of actual players, flashy special moves and powerups to make it interesting. I got it cheap from one of the Humble Monthly offers and was pleasantly surprised with how fun it was. Let’s see how much of that is in the sequel.

Ah yes, the bane of my writing existence. Write about the story of a game even though it has none. That’s pretty much is how I can describe it. No story but you have a choice of training, exhibition play and season play so assemble your team and make a story of your own. One telling the story of some basketball underdogs trying to reach the top, pay off their college debt and find out who is the one-armed- and one-legged criminal that killed their mothers. Yeah, I mean, if we’re coming up with some kind of story, why not go all in? 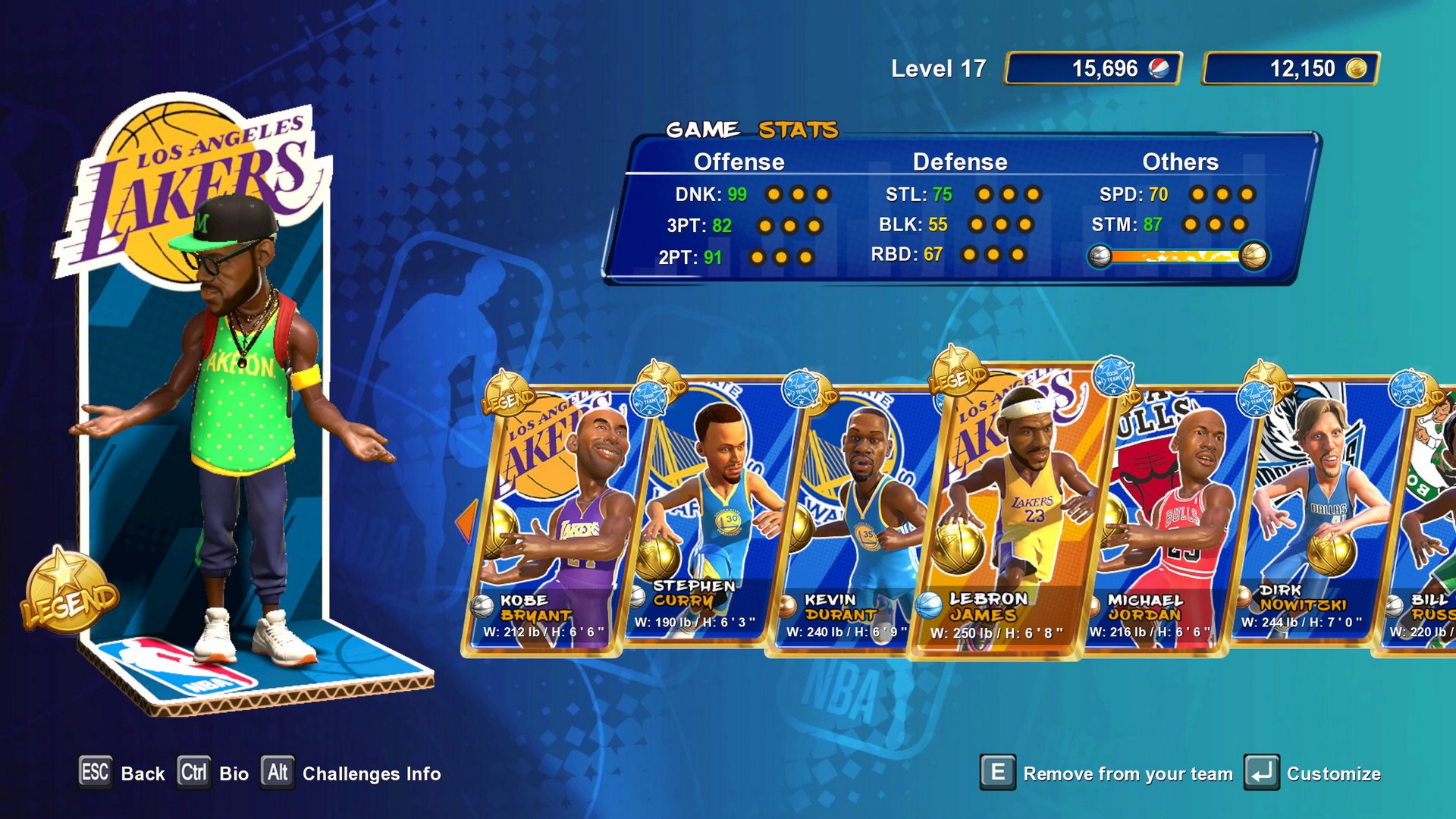 The game is played with a setup of 2 vs 2 but there are a plenty of options on how you wanna approach that. You and a CPU player vs the other CPU, players, you and an online friend vs the 2 CPU players or vs the other online players. If someone is unfamiliar with the gameplay mechanics from not playing the first game, a tutorial (accessed right from the main menu) is highly recommended. In any case, it’s 2 vs 2 on a crowded ball court where power-ups, ball streaks, and offensive play make it really unpredictable. After chaining some ball shots, you enter a hot streak mode with a randomly awarded powerup such as faster movement, easier ball shots or easier dunks. Some power-ups are also made to make the enemy team play and act worse (like significantly lower chance to score a shot), which is something that can also happen to you if the opposing team fills up their power bar faster. Of course, it’s filled with constant actions on the court, like taking shots, stealing the ball and blocking shots. You can now imagine how intense and hectic an average game feels like. You unlock new players for your team by winning the season mode, opening them from car packs and their stats can be improved by completing specific challenges (sprint for X seconds straight, block X dunks or passes, do X shots etc). How you get new players from opening packs is entirely random and that is one issue I have with NBA 2K Playgrounds 2. The microtransactions are not as pushy like in our NBA 2K19 review but they’re there just enough to turn the game into a noticeable grind. Sure, you can buy packs with a currency you earn in-game but it will take significantly longer compared to throwing some cash instantly to unlock all players in the game. If you feel particularly lucky, you can also go for gold, silver and bronze packs of the players hoping you just might unlock the one you need this time. Gambling at its finest. 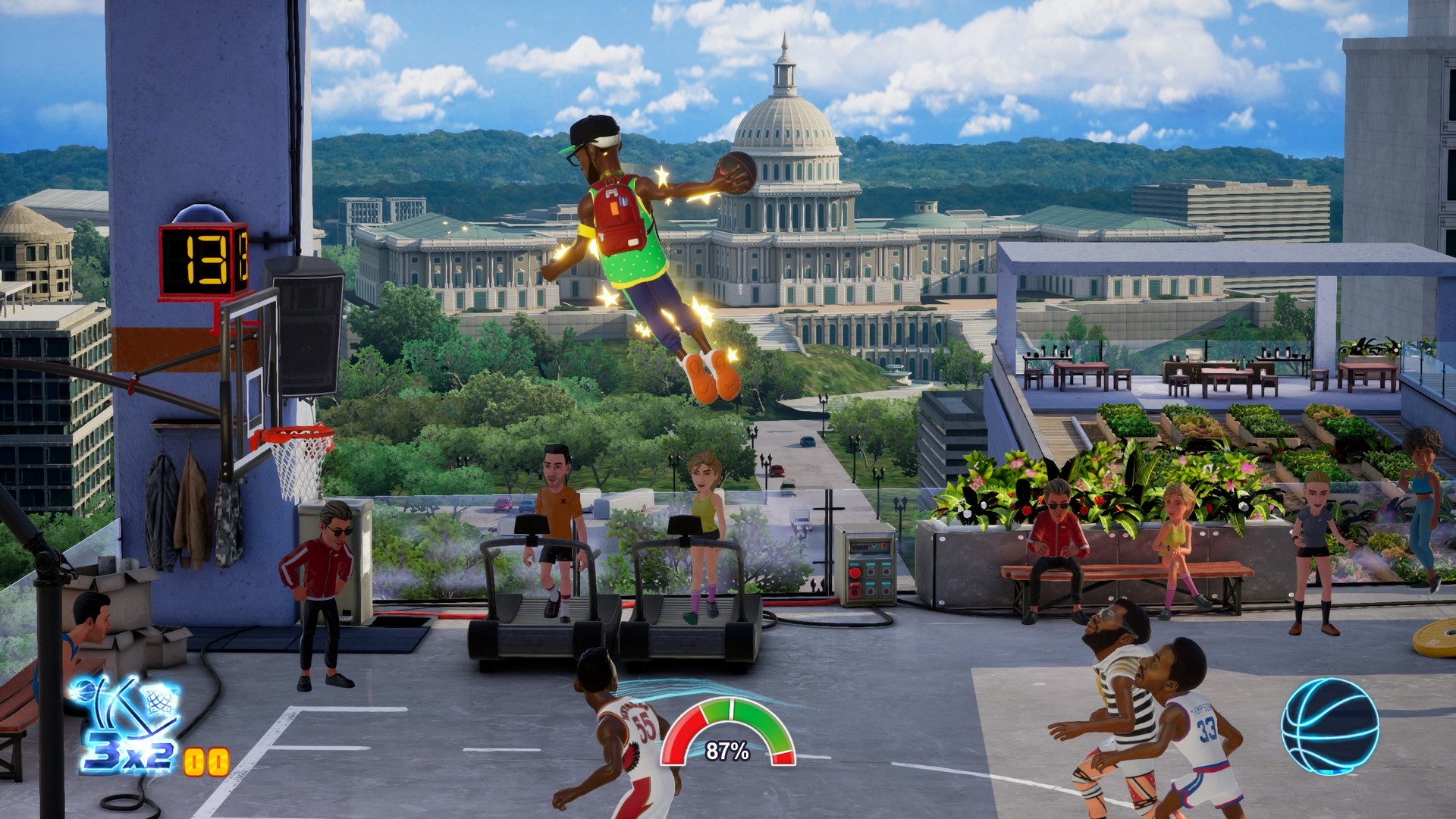 The game is backed by Unreal Engine 4 which means some amazing visuals, light effects, and fluid movements. It’s also well optimized so I haven’t encountered any hitches or slowdowns during my plays. You’ll have no issues running this at max and taking random screenshots every few minutes. As I said, the game is non stop action packed so there is always a moment for some cool screenshot dunk or capturing the moment while you’re scoring a shot climbing over the opponent’s face. 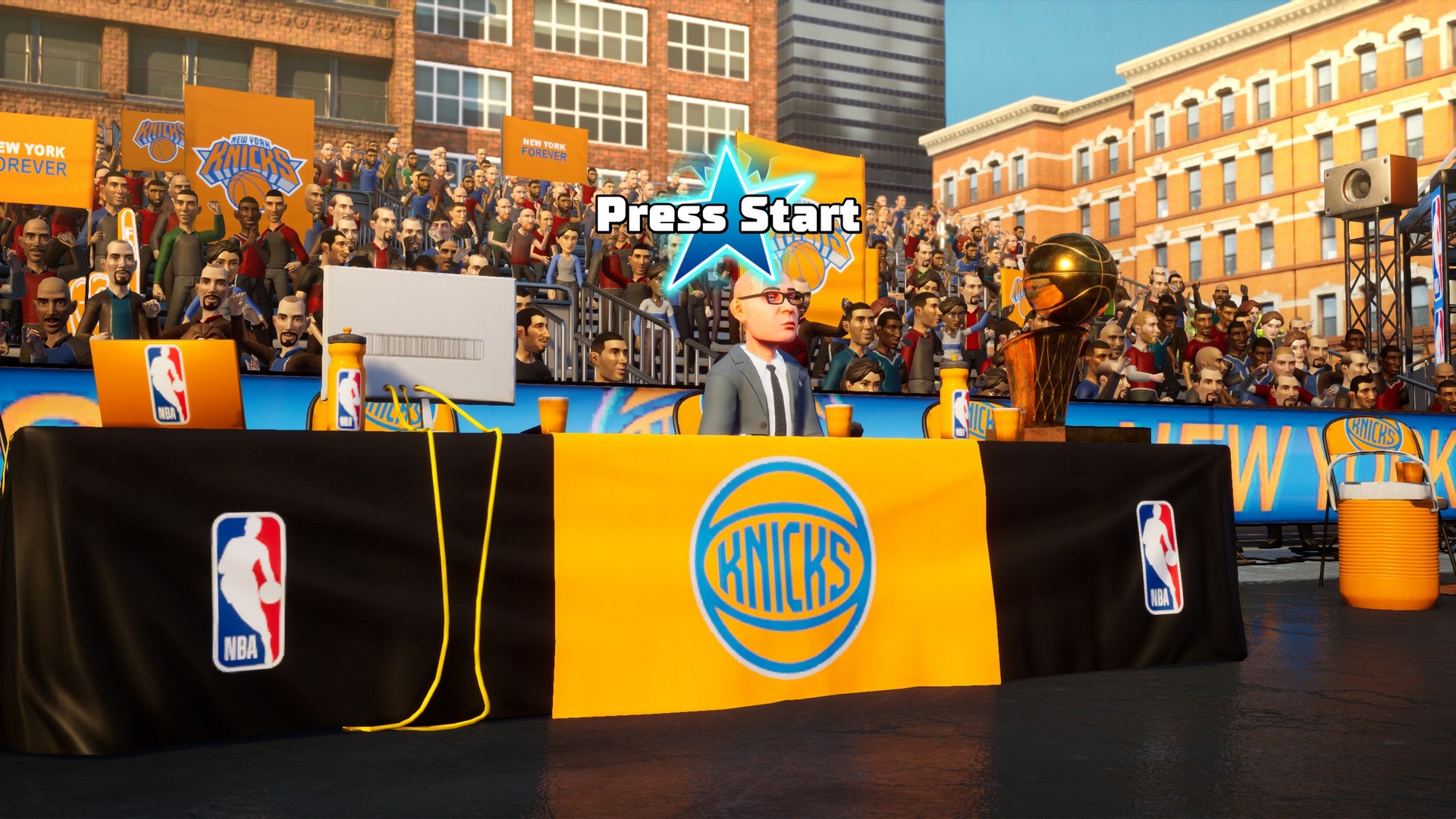 This is something that I had high expectations for and the sequel didn’t disappoint. The soundtrack is groovy and always in tune with what’s going on the screen. There are no licensed tracks but plenty of background themes that are sure to get in your head. Just the main menu theme is catchy and uplifting enough, like sending you a message that you’re in a world of fun before even selecting what mode to play. 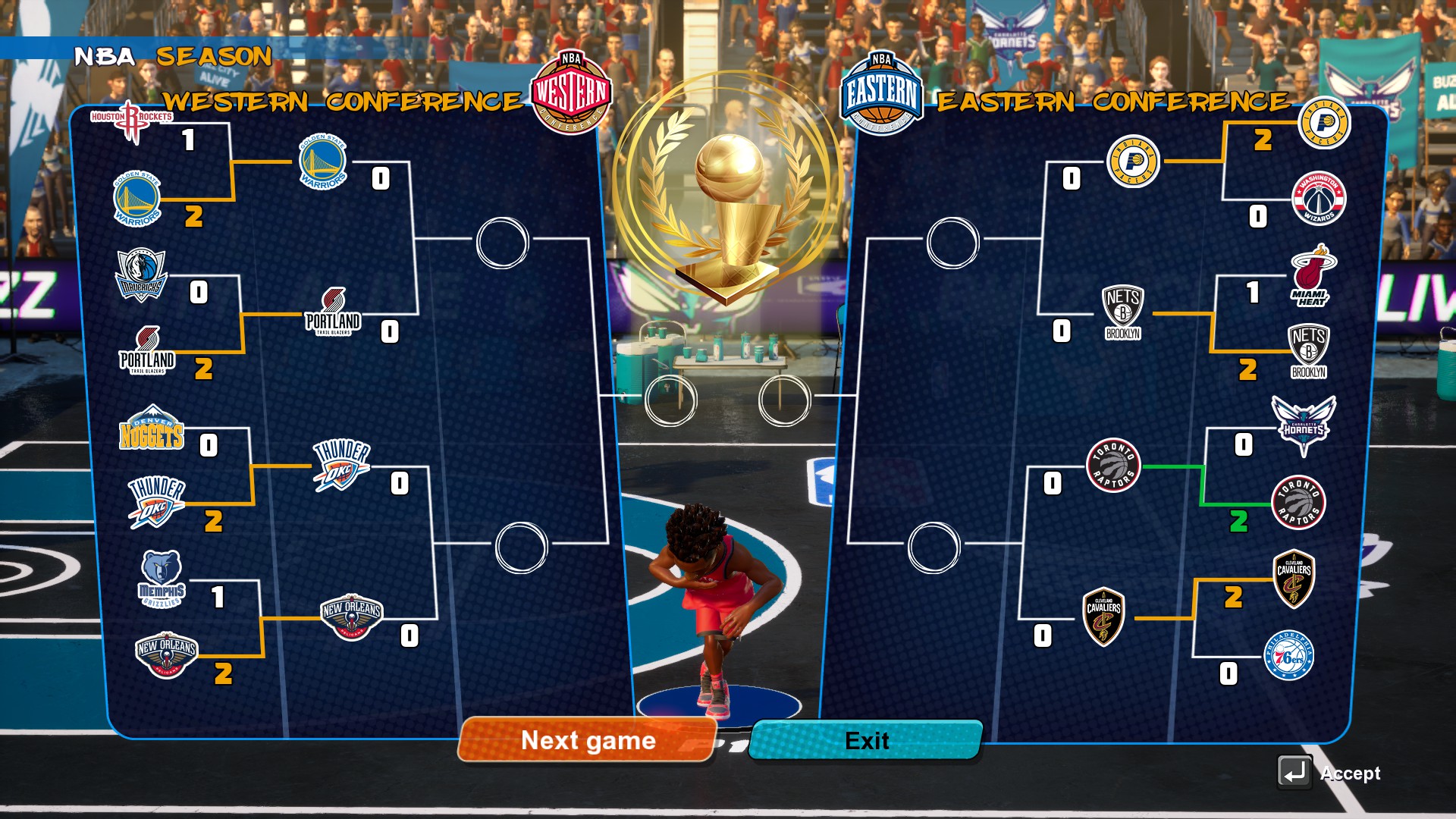 In the end, I had some reasonable expectations from NBA 2K Playgrounds 2 and the devs followed through. The same level of quality I  encountered in the first game is here as well, along with some improvements. There is an obvious nudge trying to get you to unload your wallet for a shortcut of players in the form of microtransactions. Despite that, it does not pose a much of an issue since the game is best played in short bursts and as long as you don’t have a strong need to have everything instantly right this very second, you’re good. At the core of it, the game is fun as much as it is pleasing to the eye and that’s what counts.

A clear improvement over its predecessor. Looks better and plays better too.
7.5