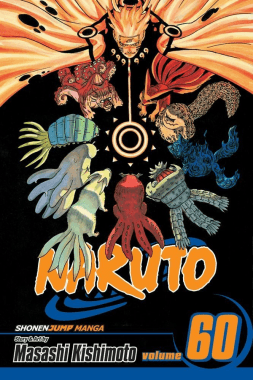 Naruto has been around for a very, very, very long time. It’s been around long enough for someone like me to be able to say; “oh yeah! Naruto! I used to read that when I was a kid“, so fairly old. Not only is it old but it’s also good, great even. It’s survived many years and there is no real slowing down for the franchise, not one bit. We’ve seen Naruto grow both physically and mentally over the years, we’ve seen him make friends and lose some and we’ve seen him save the ninja world on several occasions. Naruto Volume 60 begins to show us his connection with the 9-Tailed Fox who’s been around longer than he has. Read on to see what I thought of the Volume.

I’m going to make the most educated assumption and say that if you’re reading this I guarantee you know who and what Naruto is because, honestly, Volume 60 of this manga, or any manga, is not a good place to start. I’ll take you through a bit of the story in case you’re a few volumes behind: Basically Naruto and Killer-Bee have joined the Fourth Ninja War and, using the powers of their tailed beasts, intend to end it. Quickly. The start of the volume connects directly to the end of the last in such an epic way; all the hosts of the Tailed Beasts are fighting and when I say that I mean that they’re all fighting against Naruto and Bee. What’s nine minus two? Outnumbered is the answer to that! We get to see an incredible fight between these nine behemoths that really is world-destroying, lucky the Naruto world is so big because a LOT is getting blown up. Naruto, the titular character, has really shown his maturity in the last couple of volumes and volume 60 is no different, if anything, it shows it so much more.

We see a whole bunch of the Tailed-Beasts in this Volume. We learn about their relationships with each other and with their hosts. There’s a point in the volume where Naruto and all of the beasts (and hosts) speak telepathically within a small world only accessible by the Tailed-Beasts; he talks with them, confides in them, earns their trusts and gives them his. I think it’s almost as defining a moment as the time Naruto met his father for the first time. It’s one of those things that has been around since the very beginning of the series yet was never shown in-depth until just recently and Mr. Kishimoto did it well. Each of the Beasts/Hosts had their own personalities and their own ways of talking and just their all around style which is fantastic because these people would never have met each other in the story, they all come from different countries/villages, they all have different ways of living yet they come together on the one thing they have in common; helping their fellow man. It’s just another defining part of Naruto that really hits the mark. The volume does revolve entirely, or at least for the most part, around the Tailed-Beasts talking and confiding in Naruto so it makes sense that it was done right.

Coming from someone who both loves to draw comics and has seen Naruto from the first volume to this volume I can see how great Mr. Kishimoto has become. I believe he had mastered his style many years ago and every since then Naruto has look everything but bad. We’ve seen such beautiful art from this manga, not only does the front cover absolutely rule but, wow, the art is great. I can appreciate how hard it would’ve been to have to draw such gigantic, detailed, monsters all in the same place at the same time AND to have them moving and fighting. Well done. Though I don’t know what I expected, we’ve seen this man in full-blown action before. Because the battles in this volume are on such a large scale we get to see a lot of the open ninja world, for example; a great deal of open fields, mountain ranges, etc. This man can do no wrong when it comes to art and style.

Pretty standard for a normal manga release: We’ve got a little paragraph from Mr. Kishimoto himself at the start of the book, like always. We have a whole bunch of guest art before every chapter starts and that looks really nice. They’re just the normal things that have been coming with Naruto manga since day dot so I can’t say I’m disappointed because it’s not like we really expect it to be any different.

This is just an all-round great volume, let alone, Manga. Obviously don’t pick this up if you’ve never seen or read Naruto but if you’ve got a friend that’s up to date maybe just get him or her to take you through it then go pick up this Volume. It’s not particularly hard to follow but you’ve got 60 Volumes of story to wrap your head around. As a stand-alone volume: it’s just great. It’s another beauty to come from Masashi Kishimoto with great art, great story and just all around greatness. It’s Naruto, people! It’s all good! The dialogue isn’t boring nor is it annoying, you see all the characters you want to see and you have all the action you want paired with fantastic story. Pick it up, guys, it’s not something to just let slide by.