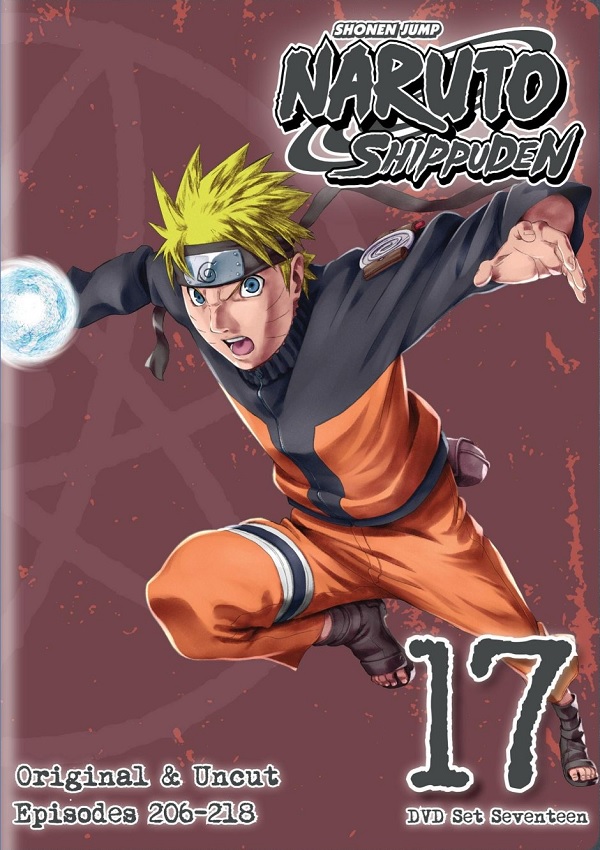 Overview
When a series such as Naruto makes it into the five hundred episode range, viewers have obviously taken a liking to the franchise and have become invested in what will happen to these characters. Throughout the original Naruto anime and now Naruto: Shippuden, we’ve seen Naruto and Sasuke turn from enemies, to reluctant allies, to friends, to bitter enemies. However no matter how dark Sasuke’s path seemed to turn, Naruto always believed that he could bring his friend back to the light. Now, after the events of the last set, will Naruto: Shippuden Set 17 be able to capitalize on the major developments that took place?

Story
With the Five Kage Summit successfully repelling Sasuke’s attacks and Danzo on the run, Madara has revealed his plans to the remaining Kage. Madara has revealed that he wishes to use the power of the jinchuuriki to revive the origin of the tailed beasts, the Ten-Tailed beast. With the power of this creature he will use the Infinite Tsukuyomi on the moon to give himself complete control over everyone on the planet. When the Kage refuse to turn over Killer B and Naruto, the last two jinchuuriki, Madara declares that the Akatsuki will hold open warfare against the five great nations in order to complete his plan. 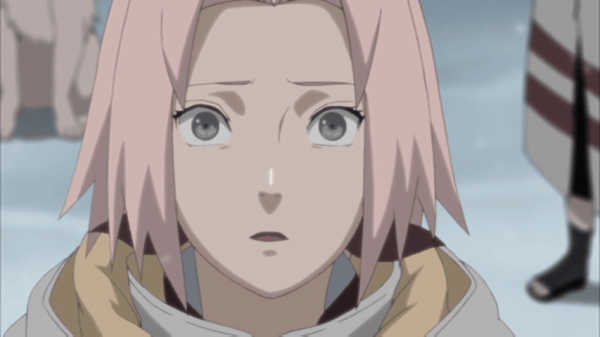 After this declaration, the remaining Kage agree to form the Allied Shinobi Forces with the Raikage as the leader. At the same time, Killer B is locked in combat against Kisame in battle. Focusing back on Naruto and the Konoha 11, Sakura approaches Naruto to confess her love to him, in an effort to free him from his promise of trying to bring Sasuke back to the village. When Naruto doesn’t believe her, she leaves and asks for the help of Kiba, Lee, and Sai in order to track down Sasuke so that they can deal with him.

As Sakura’s determination leads her to take steps she never thought possible, Madara brings Sasuke to where Danzo is currently hiding, allowing Sasuke to face off against the man who ordered the elimination of the Uchiha Clan. With the Allied Shinobi Forces beginning to mobilize and organize for the upcoming world war, Sasuke facing off against Danzo, Sakura heading towards Sasuke’s location to put an end to him, and Naruto reeling at the fact that his friends are preparing to eliminate Sasuke, the set brings with it a battle of great importance as well as the strain of friendship between the members of Team 7 and what Sakura and Kakashi are prepared to do. 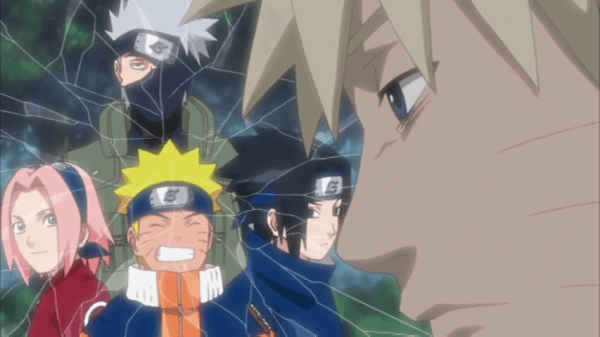 While it is difficult to follow up on the events of the summit, this set does a rather spectacular job by moving the plot forward with a number of important battles. Viewers see Killer B facing off against Kisame, followed by the multi-episode battle between Sasuke and Danzo, and finally the confrontation between the members of the original Team 7. While it is great to see a story move along without fighting and there are a few episodes near the end of the set that are focused on preparation and digesting the events that had taken place over the past episodes, most of the story told in Set 17 occurs during Sasuke’s battles.

That being said, there are a fair number of flashbacks throughout this set but before you get too concerned over this fact, it actually helps drive home the emotional impact that Team 7 is feeling. While flashbacks are often the bane of long running series such as Naruto, and most of the time they are used to either emphasize a character’s death or to provide filler material, this time the flashbacks are focused on the times that the team has shared in the past, such as Sakura’s love for Sasuke and her tearful begging to Naruto to bring Sasuke back to the village, Kakashi’s thoughts of fighting a previous pupil, and Naruto’s undying devotion to his friend. 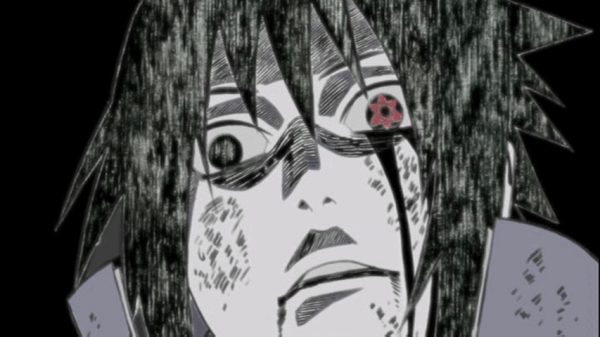 With emotions running high and a world war between the Allied Shinobi Forces and the Akatsuki, Set 17 delivers one of the battle viewers have been waiting for and the emotional confrontation of Team 7 as they come face to face with what Sasuke has become, which is a man twisted with thoughts of revenge and hatred and nothing else. All of this is done while remaining on focus with no filler and using meaningful flashbacks, though they do feel a bit over-done by the time the confrontation ends.

Visuals
Another of the banes that weekly shōnen shows such as Naruto suffer, is inconsistent animation quality and unfortunately that remains a problem in Set 17. The beginning of the set features some nice looking animation while focusing on Naruto and Sakura’s conversation as well as Naruto’s conversation with Gaara, but whenever the focus switches elsewhere the background details and basic quality suffers. 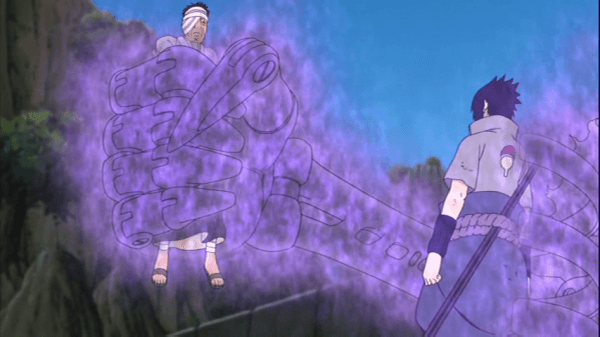 Oddly enough, while most of the action that takes place between Killer B and Kisame as well as Sasuke’s fight with the members of Team 7 remain impressive looking with fluid movement, the quality actually takes a dive during Sasuke’s fight with Danzo. There are noticeable animation issues and loss of detail in the characters’ designs as they fight and even Sasuke’s Susanoo is poorly presented in the battle, which is a real disappointment considering how long fans have been waiting for this fight.

Audio
As one would expect considering the running length of the Naruto series, Viz Media has retained the voice actors for all of the characters presented in Naruto: Shippuden Set 17 with no new characters really introduced or focused on. As such, viewers can expect the same high quality voice work they have come to expect from the series, even with Killer B’s English rhyming being as painful as the Japanese dub. 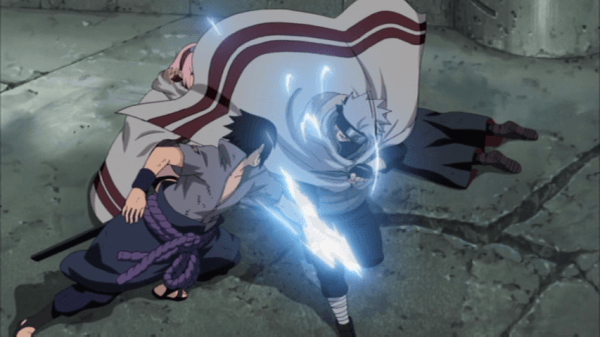 As far as background music goes, viewers can expect the same standard themes throughout with nothing changed or no standout themes. The opening theme found in this set is “Lovers” by 7 Oops and it is not only enjoyable to listen to but also very fitting considering the choices Sakura makes in this set. As for the ending theme, it is “Freedom” by Home Made Kazoku and it is a much more rock themed song and light-hearted in comparison to the opener.

Extras
As far as bonus features go, Naruto: Shippuden Set 17 comes with a number of on-disc extras, though a number of them are fairly standard for a release such as this. There is a clean version of the opening and ending theme, English Credits, and trailers from other Viz Media shows. Accompanying these extras are six pages of original storyboards from the episodes, an art gallery consisting of ten pieces of character art, and an omake. 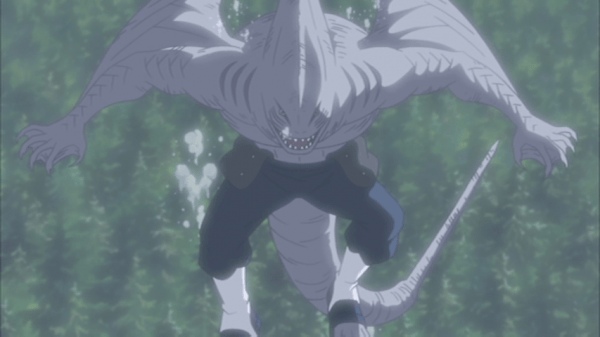 There are two mini-shorts about a minute long found in the omake, with the first one focusing on how Guy, Neji, and Tenten have not been given much screentime and are fighting for who gets to appear and the second showing Sai, Sakura, and Naruto looking at magazines in a convenience store. These little shorts have been given an English dub and provide us with some of the standard Naruto comedy which was mostly lacking in the main show this time around.

Overall
While animation quality continues to be a plaguing factor in the series, Naruto: Shippuden Set 17 manages to deliver both action as well as emotion. A number of important fights take place in this Set and, although the series ends up going overboard on the flashbacks, they help drive home the feelings that Sakura and Naruto are struggling with when dealing with Sasuke. With the Fourth Great Ninja War declared and the Ninja Alliance preparing to face off against Madara and the Akatsuki, things continue to heat up in Naruto: Shippuden.