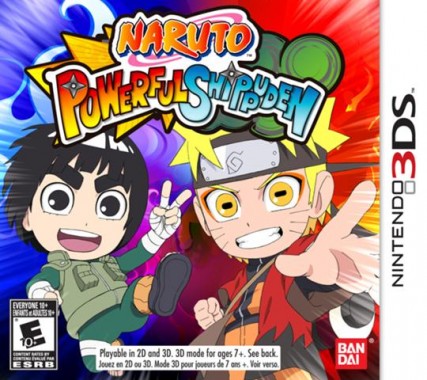 Overview:
It was roughly a year ago that the Naruto SD spin-off anime series begun airing. Propelled by the popularity of the Naruto franchise, Naruto SD also known as Naruto Spin-Off: Rock Lee and His Ninja Pals, has been a smash hit in all regards. So it really comes as no surprise that Naruto SD would follow suit of the main Naruto series and spawn a video-game adaptation. So how does it fair compared to other Naruto games? Does Naruto Powerful Shippuden live up to the Naruto name? 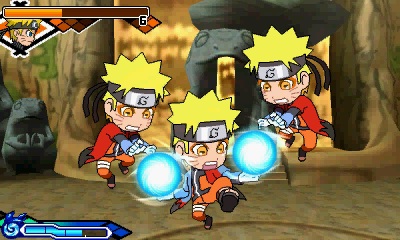 Story:
Naruto Powerful Shippuden features two different stories for players to dive into. The first of which follows titular protagonist Naruto Uzumaki and the second follows the real star of the Naruto Spin-Off anime Rock Lee.

The Naruto story generally follows along with the Naruto Shippuden anime story for the most part while Rock Lee’s plot is unique to the game and seems to be all about the random adventures that Rock Lee gets caught up in while Naruto is off fighting the big bads of the ninja world. Both stories are conveyed in brief segments before and after missions and always are done to comedic effect in keeping with the style of the Naruto Spin-Off anime.

The plot is of course not the main focus of this game and exists simply to add some flavour to the gameplay and with the insanity that goes on in this game it is certainly quite a unique taste at that. 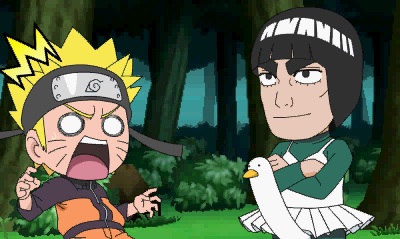 Gameplay:
The game itself is relatively simple by design yet has a surprising amount of depth to it. It focuses completely on single-player gameplay to great effect as it feels incredibly well thought out with a great level of attention spent on designing both main story modes. As previously mentioned you can play as either Rock Lee or Naruto and go through each of their stories and take on a variety of different missions all played out in a side-scrolling beat-em-up style.

The missions themselves vary to a great degree which does go a long way to ward off any feelings of repetition, with similar types of missions spread out from one another with a lot of variety in between. It works well as once the same mission type inevitably comes back around it doesn’t feel tired. The main types of missions that you will face are a survival type which requires you to fight off a number of enemies for a certain time limit, an adventure mission which generally focuses on getting through a level, a simple task of taking out a certain number of enemies, boss battle missions and a plethora of other mission types that keep things fresh. 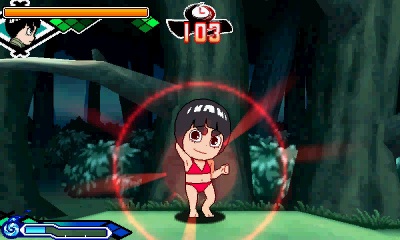 Both story modes are incredibly long in their own right and have a great deal of replay ability to them due to the RPG like elements in the game. You can level up your character and customize your abilities and team of comrades. You will unlock a number of companions throughout the story mode which can be allocated to a button command to summon, certain ninja pals have certain abilities which are useful in different situations.

Once you have developed your own character enough you can also unlock a second form transformation that will power you up and allow you different abilities. The RPG stat-building aspect of the game provides a lot in the way of customization and adds a great depth to Naruto Powerful Shippuden. 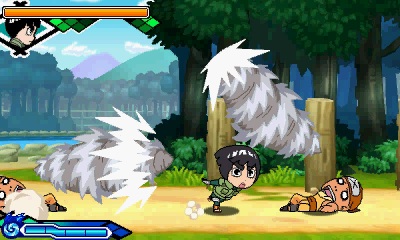 Tornados? Ain’t nobody got time for that!

The game also features an Endless Battle mode which is unlocked as you progress through the game. This mode is pretty self explanatory and revolves primarily around fighting off waves of enemies for as long as you possibly can. It is a fun little mode that is a great place to hone your ninja skills and have a bit of simple fun.

Naruto Powerful Shippuden is a game that is exploding with fun. Its genius is in its simplicity. Sometimes less is more and in the case of this game that much is very true. It dials back on the superfluous and focuses in on its core gameplay brilliantly. Whether you like Naruto or not it hard to deny that this game is one hell of a good time. 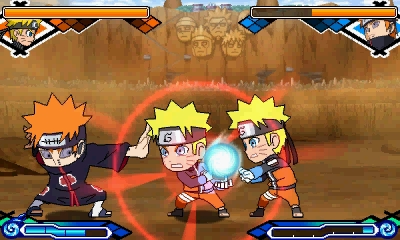 Talk to the hand Naruto!

Visuals and Audio:
Aesthetically Naruto Powerful Shippuden utilizes the super-deformed chibi art style of the Naruto Spin-Off anime series to great effect. The chibi character designs look great and really match the comedic tone of the series in all regards. It goes a long way to giving this game a very distinct and unique visual style in comparison to the rest of the Naruto games on the market. It makes decent use of the 3DS’ 3D stereoscopic view, which a great level of immersion but it does feel non essential all things considered.

The game’s soundtrack is a great array of tracks that carry the ninja feel quite well, but it was somewhat disappointing that the awesome theme of the anime ‘Give Lee’ isn’t featured in the game as far as I could see. Despite that the overall soundtrack is well composed and well suited to the game. It is worth noting that the game does not feature an English dub instead it features the original Japanese cast, this won’t be a problem however as the majority of dialogue is in text form, so it doesn’t affect the game in any way. 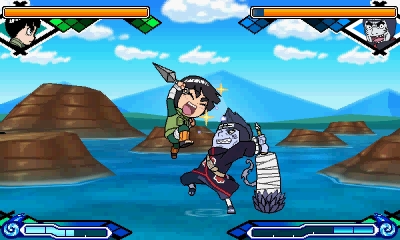 Rock Lee laughs in the face of danger.

Overall:
What we have here is somewhat of an anomaly, it is a spin-off game based upon a spin-off anime series. The general nature of spin-offs denote that they are of no consequence in the grand scheme of the series. Naruto Powerful Shippuden blows all preconceptions away and becomes what is one of the best Naruto games in the series.

Inti Creates have brought their rich history and experience to this game and made it something special. They should be applauded for what they have done with this game. It is bursting at the seams with energy and playful affection for the Naruto series and is a game that truly feels like it was made with love. Not just a love for the Naruto series but also love for good games.

Naruto Powerful Shippuden is one of the 3DS’ finest action games and is a must for Naruto fans. Forget all your preconceptions and jump in and have some fun with Rock Lee and all of his Ninja Pals.