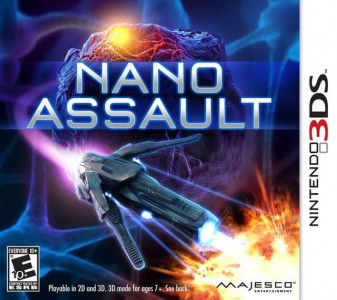 Overview
During the past 10 years or so, we have seen quite a resurgence in bullet hell games. For those that remember, Shin’en’s Nanostray was one of the better releases we seen for the niche genre when it hit the Nintendo DS back in 2005, earning itself a sequel and a small following due to it’s frantic gameplay and stunning presentation. A few years later, Nano Assault is back and ready to revitalize the brand on the Nintendo 3DS. Does the extra dimension and new control scheme pull this ship into the same “hidden gem” status of it’s predecessors? Here is my review for Nano Assault. 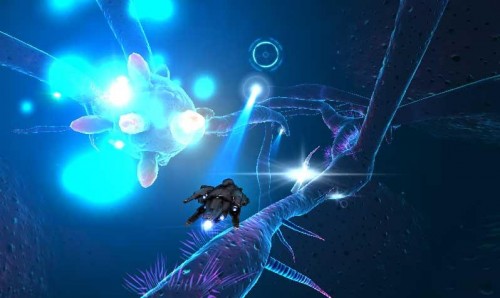 Story
I really would like to say that Nano Assault has no story, as that would be doing the game a favor for the most part and I would have nothing to grade in this review in that area. This title’s main narrative sets out to tap into the player’s knowledge of science, where a deadly virus has broken out and it is up to you to go mini and purify cells before human life is wiped out completely. This may sound exciting, but the game never provides any attachment between the main player and the protagonist, which makes the little bit of story given feel unnecessary.

Yes, there is just enough to make completing your objectives worth it, but most will probably not pay too much attention as the character development and overall plot have just been forced in, providing a small sense of urgency the beautiful environments you will explore. Most stick-shooters don’t have much of a plot anyway, but those looking for something deep will walk away a bit disappointed when it comes to Nano Assault’s lackluster methods of storytelling. 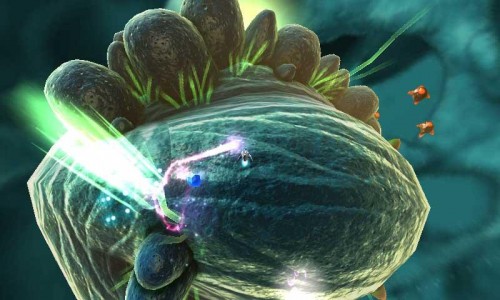 Gameplay
The main objective of Nano Assault is to explore cells and collect three DNA strands for each area. Once that mission is complete, the player then just has to go to the next level and do it all over again. This may sound pretty standard, but it’s what comes in-between that truly makes the cell traveling found here worth the ride. As you aim to gather DNA, you must also take out organisms that are out to destroy your small vessel. Thankfully, this little ship has a jam packed arsenal and there are quite a lot of extra options included to break up any monotony during the game.

As far as the in-game worlds go, I could best sum it up by asking you to think of Super Mario Galaxy. Most of the time, the player slides around a cell in a 360 degree manner, blasting enemies along the way. This is done with a top down perspective in tow, so the player can constantly get a complete view of their surroundings. The D-pad makes this movement feel smooth as well, giving your a ship feel as if it were gliding. During boss battles or special stages, this perspective changes into a third-person view and allows the player to get a grasp on their environment as they dodge projectiles and aim to hit those harder to reach targets. I personally thought this change-up of camera angles did wonders to keep the game feeling fresh, and during the on-rails segments (which are sadly scarce), this title definitely rivals the likes of Star Fox with it’s quick and satisfying combat scheme. 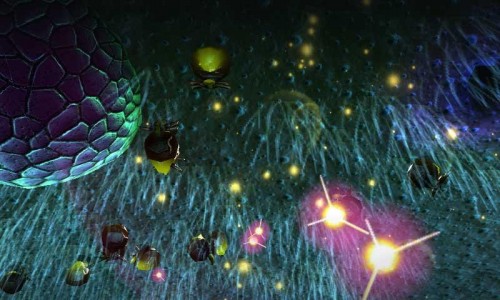 While exploring the cells can be easily done, shooting is a bit more challenging due to the control layout. Even though the 3DS just has one stick, it’s best to go into Nano Assault with a twin-stick mindset. Whenever the player is moving about, they can instantly fire by pressing any of the face buttons on the handheld. This works quite a bit like Centipede: Infestation, where each input fires in a different direction. Hitting B will fire right, A will shoot south, X will fire north, and well…you get the idea. If you want to change the range of your fire, the shoulder buttons can be utilized to take on multiple targets at once. Yes, it sounds a bit complicated compared to most romps in this genre, but after a few levels these fluid controls become second nature. Secondary weapons can also be used, allowing for more powerful shots or increased defense for the much more challenging latter stages. 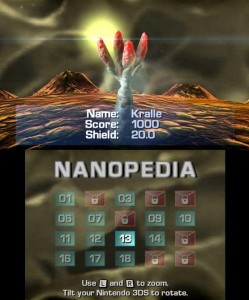 Those wanting something a bit more tuned to the core of a bullet hell will find their true love in Arcade Mode. This mode lets you play through previously explored stages and try to rank up the highest score possible, with an online leaderboard readily available to both rank the player and give plenty of reason to keep going back in for more. Achievement hunters are also in luck as there are quite a few to collect, with an in-game jukebox also offering up tracks from the main game to unlock and listen to at anytime. My personal favorite of all the extra perks though was the Nanopedia. This guide of sorts lets the player get details on all the enemies in the game, and uses the 3DS’ play coin system to unlock further entries. It won’t take many a long time to finish Nano Assault’s main story mode, but unlocking everything and perfecting that top score in arcade certainly added a lot of reason to keep coming back for more virus-killing greatness.

Visuals/Audio
There isn’t too many games on the 3DS that I can say the same experience can be found by turning down the slider, but Nano Assault’s graphical offerings demand attention and the 3D is definitely worthy of keeping on for the entire trip. The colors of the environments are simply mesmerizing and I had many moments where I would lose a life just trying to take it all in. The enemies and even the pickups just add to this, with each being lightly detailed and “flowing” in this beautiful microscopic art piece. Whenever the action got a bit too hectic, I did notice a bit of a stutter from the game, just trying to keep up with the chaos, but this is easy forgivable and honestly a bit rare to see. 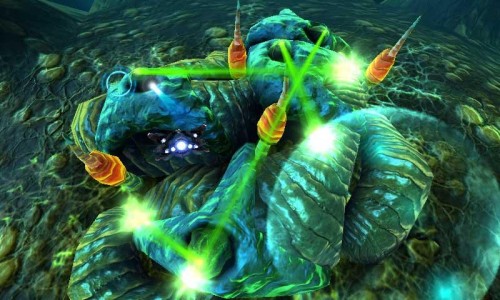 There is plenty of reason that Shin’en made the soundtrack an unlockable extra. Each melody brings a sense of calmness or chaos to each level and helps create a new and flavorful atmosphere for each stage. This does wonders to even the most quiet of areas as even serene environments have tracks to keep the player on the edge of their seat. As far as the other sounds in the game, bullets sound as good as they look popping into enemies and the guide’s voice actress did a terrific job at simply fitting into this vacant and infected universe.

Overall
As I am writing this, the 3DS has been out for a good nine months now, and we haven’t seen many offerings for fans of shooters that have been truly worthy of any accolades. Nano Assault may not be the deepest game on the handheld, but as far as gameplay goes, there is no better twin-stick to invest in at the moment. The combat and the unique control scheme found within provide something different for the genre but remain easily accessible to all comers. The visuals are also stunning from beginning to end and the soundtrack compliments all of the eye candy with intense tunes to make everything feel much more exciting. I’m sure there will be plenty more top-down shooters during the 3DS’ lifespan, but Nano Assault stands out as it does everything right and has set an early standard for how these games should be done, period.