It’s hard to review games that are free. After all, how can you judge something that cost you absolutely nothing?
Naked Sheep is one such free game. Developed by althi, Inc. it gives players the chance to finally achieve their wild dreams of being sheep shearers via some wild, screen-swiping action. Does the game succeed in creating fun gameplay or is it just baa-d? 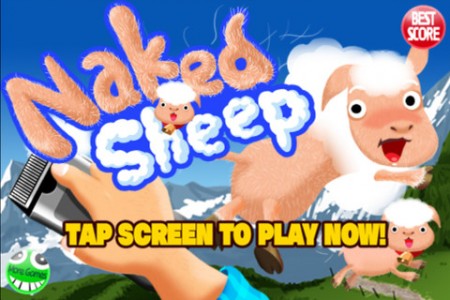 Frantically, you swipe the screen, shearing wool off sheep as they come towards you, hoping that the timer doesn’t run down. Sounds fun, yeah?

Naked Sheep operates much like an assembly line. You face a 2-D plane through which sheep slide from right to left, and a running timer. As the timer runs down and the sheep zoom into the screen, you have to swipe your finger as fast as possible all across the screen in order to shear the entire sheep. Succesful shearing results in bonus time and points, as well as a voice (that sounds as strange as the one in the Bejeweled series) saying “Nice!” and “Awesome!”.

As time passes, power ups and traps appear on screen in the form of little circles. You have to take a break from swiping to tap these circles, trying to avoid the traps that send you larger sheep or slower transitions between them, and aiming for the power-ups that will give you more effective shears and smaller sheep. It all becomes quite frantic, and it’s quite fun in your first few forays into mad swiping and tapping. 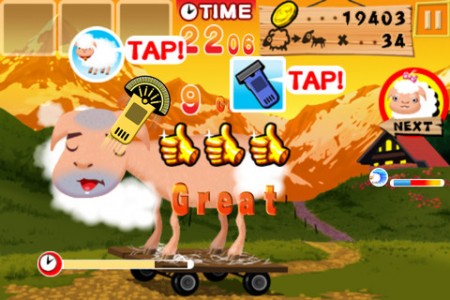 But that’s it. That’s the game.

It becomes even more ridiculous when you realize that there really is no strategy to the shearing. You literally just swipe madly any which way, tapping the screen for power-ups as they come. Your finger starts burning from the friction, the screen becomes so hot that it stops picking up your finger taps, and the game just ceases to be fun.

Naked Sheep gives you the option to upload your highscores to Games Center, but really, who cares? There’s really very little skill involved, and the gimmick of frantically swiping the screen becomes both annoying and droll.

The gameplay sends sheep at you as if they were on an assembly line, and it’s about as much fun as working in one. 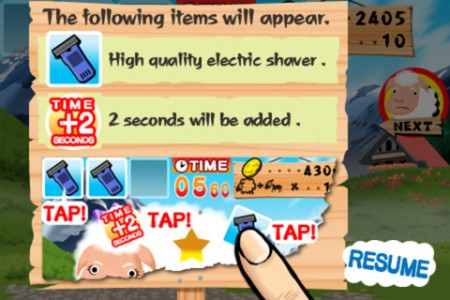 The game’s sounds and aesthetics are what we’re all used to from casual iOS games. Two dimensional, cartoonish, and with plenty of attempts at cutesy animals, Naked Sheep does nothing new and nothing horrible in the visual department. The up-beat, and up-tempo sounds and music also complement the distinctly unoriginal nature of the game’s presentation. 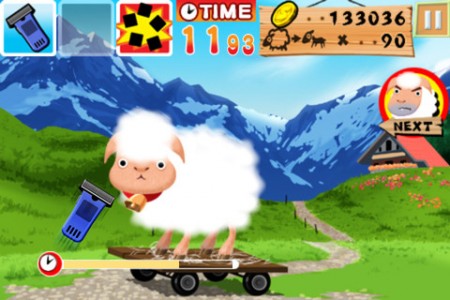 In the end, Naked Sheep is a free game, but that doesn’t mean it shouldn’t be judged harshly. A free game still costs another type of currency, and that’s time. Naked Sheep certainly will give you about five minutes of enjoyment but you’ll then look upon it in disgust, deleting it not only from your iOS device, but from your computer’s download history as well.

The gameplay is a stupid swipe-fest that never challenges you beyond whether you can stand the burning of your finger or the touch-screen’s sudden failure to sense touch due to its overheating. This game is not worth money, that’s for sure.

But it’s certainly not worth your time, either.