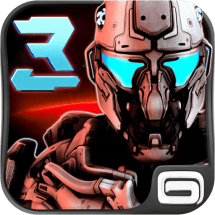 It is a banner year for third games in a series. This year we have Max Payne 3, Mass Effect 3, and now, N.O.V.A. 3. Gameloft is attempting to show that a blockbuster FPS can exist on the iOS platform with the Modern Combat and N.O.V.A. series. Clocking in at a hefty 1.57 GB, can N.O.V.A. 3 prove it has what it takes to exist besides the likes of Halo, Call of Duty, and Battlefield?

Kal Wardin returns to Earth to assist N.O.V.A. in recovering an ancient Judger artifact N.O.V.A. stole from the Judgers.  Upon recovering the artifact, a humanoid alien Prometheus informs Kal that humanity and their arch nemesis the Volterites are not yet ready to wield the power contained the artifact and humanity should not have stolen it in the first place. As punishment for human kind’s transgressions, Kal must now go rescue two other Judger artifacts that have gone missing before the Volterites capture the artifacts and create a weapon of mass destruction.

N.O.V.A. 3 manages to create an interesting story with witty writing. There are a few genuine laugh out loud moments. Thanks to the fact the game is fully voice acted, the witty writing really shines. The characters all have distinct personalities that are believable and entertaining. The only weakness to N.O.V.A. 3’s storyline is the fact it is assumed you have played previous N.O.V.A. games. Although a very short synopsis is given during full blown loading screens, as a person who has not played the previous games, I felt a little lost at certain points in the story. A short cut scene summing up the previous two games would have been a great help to newbies to the series. 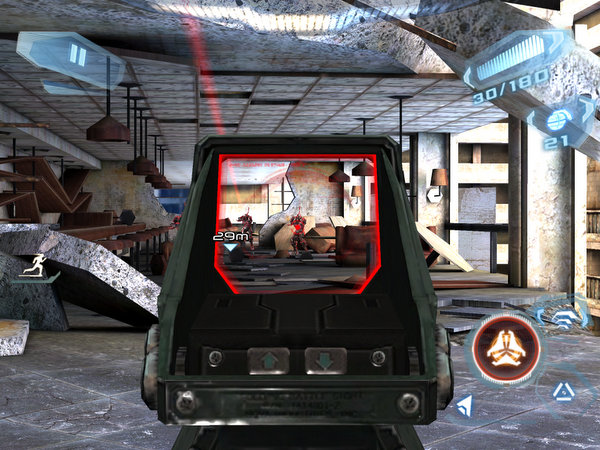 N.O.V.A. 3 is a first person shooter with both single player and multiplayer components. The single player is a several hours long epic that will keep players occupied for a long time. The level design is excellent, smartly mixing run and gun sequences with the traditional sniper levels, jumping puzzles, vehicle combat, and other FPS mainstays.  There are some truly epic moments with vehicular combat in N.O.V.A. 3. Although hardware constraints limit the possibilities of Call of Duty Modern Warfare styled large scale combat moments, Gameloft is able to recreate the heart racing actions with high speed vehicle chases.

Multiplayer contains six maps and six modes. Play is available over local Wi-Fi and through Gameloft Live’s online services. A maximum of 12 players per battle is supported over Free-For-All, Team Deathmatch, Capture the Flag, Freeze Tag, Instagib, and Capture the Point game play modes. I found minimal lag with gameplay reminding me strongly of Halo’s multiplayer. Coins are rewarded after each multiplayer battle that can purchase weapons, perks, and weapon attachments. Although weapons can be picked up on the map at pre-determined locations, purchasing these weapons allows players to spawn in with weapons other than the default assault rifle. Level designs are well done, with plenty of room for battles with lots of cover. I noticed Heart of the Machine has become the fast favourite thanks to its close quarters battles, with lots of vertical areas to fire down upon the enemy. Overall I found N.O.V.A. 3’s multiplayer to be a frantic and fun affair that runs smoothly with minimal lag, an impressive feat on the iOS platform. 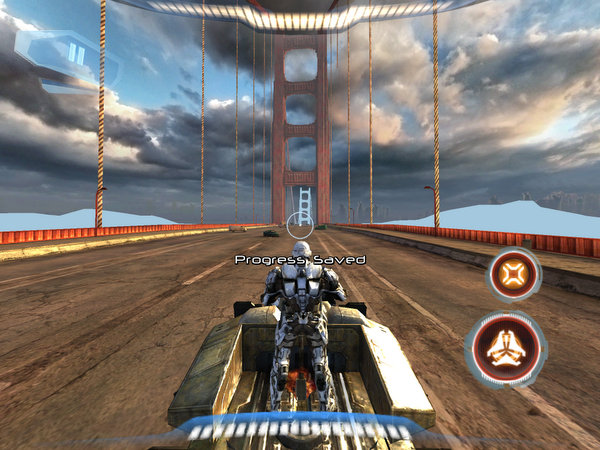 N.O.V.A. 3 controls are solid with a well-balanced aim assist. There are multiple control schemes to choose from, including twin stick based, screen area based, and gyroscope based. Short of a physical controller, there is literally something for everyone’s personal taste. I found button positioning on the UI was well placed, though I wish there was an edit mode allowing players to shift buttons exactly where they found them to be comfortable. Touch screens are not the best platform for FPS games due to the busy nature of FPS controls. Two thumbs really are not really enough to manage all the actions that are needed and the gyroscope can be tiring with a bulkier device like the iPad. Although N.O.V.A. 3 did not make me believe that I can dump my mouse and keyboard combo for a touch screen and never look back, N.O.V.A. 3 performed spectacularly within its limitations.

And now the ugly, on the new iPad N.O.V.A. 3’s single player is agonizingly glitchy on the new iPad. I encountered one full game breaking glitch that made it impossible to continue playing the game half way through, one near game breaking glitch that required a full level restart to fix, and several more minor glitches that required restarting from a previous checkpoint to fix. Glitches included falling through the map, being trapped behind rocks and unable to proceed, enemies not spawning correctly, objectives not correctly being completed, and randomly dying. The random deaths I suspect are related to being stuck in the environment leading to what feels like a random death. Elevators were the cause of many of the glitches to the point getting from point A to point B riding an elevator without dying became a small mini boss in itself. The first level was flawless, but as the game progressed, the game became glitchier and glitchier until I was locked in a room with two locked doors, unable to proceed any further in the game. Doing a little research showed that most players are not suffering from the same level of glitches as I am. I suspect these problems may be related to the new iPad and the fact it was only recently released to the public. However this is purely speculation, your mileage may vary when it comes to other iOS devices. If it was not for the fact this game is so painfully riddled with bugs, N.O.V.A. 3 could have been the best implementation of a shooter on iOS yet. Unfortunately, the game is brought to its knees with the crippling level of glitches. 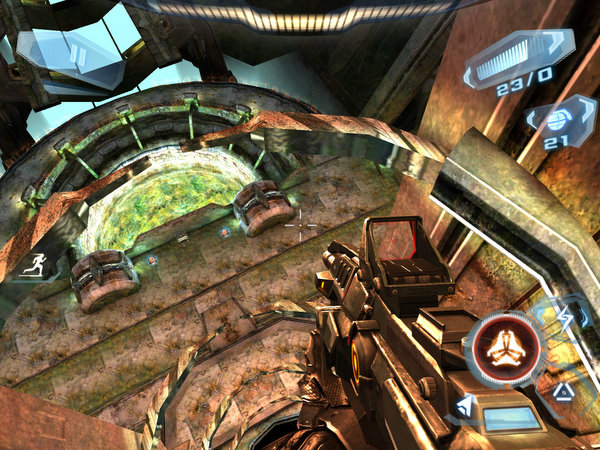 N.O.V.A. 3 is jaw dropping. It looks fantastic. On the iPad’s Retina screen, the game could easily pass for an Xbox 360 game. Models, animations, and skins could all find themselves at home on a home console or PC platform. The level of detail in N.O.V.A. 3 is simply impressive. It could easily stand beside Infinity Blade 2.

Although the game ran smoothly with no noticeable dips in FPmies that are visually different to keep players on their toes.  Weapon design is in the same vein as the Halo series, clearly inspired by modern day weaponry then given the futuristic twist. N.O.V.A. 3 manages to meet all expectations and then some in the graphics department. Gameloft makes great use of the new iPad’s Retina screen to provide some jaw dropping visuals that will impress even the most jaded mobile gamer.

N.O.V.A. 3 continues to impress with in the audio department too. The game is fully voice acted. Surprisingly, the voice acting is great. The weakest link in voice acting is Kal Wardin’s voice acting. It was a bit of an unpleasant shock to find the main character was acted so weakly in comparison to the rest of the cast. At times, Wardin was able to hit the stride and became a believable character, other times, the acting fell completely flat. Unfortunately those moments really ruined the conversation with the other characters in the game.

The sound effects and music department also provides a strong showing. The game provides enough music at the right times to help build mood without becoming intrusive or distracting. Sound effects for guns and alien enemies are spot on. I strongly recommend playing N.O.V.A. 3 with a good pair of headphones. Although the crappy Apple ear buds is better than the puny speakers, the cracks, thumps, and fwoooshes of the weapons are best heard through a decent pair of cans that can pump out respectable bass.  N.O.V.A. provides a strong audio presentation with a fully voice acted game. Although the main characters voice acting can be hit or miss, voice acting, music, and sound effects are all worthy of an AAA console or PC title. 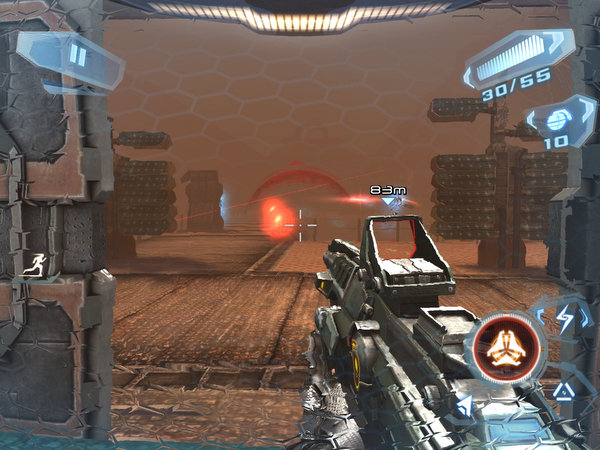 N.O.V.A. 3 came so close to being a perfect game. The audio is top notch, the graphics are simply stunning, and the game is the best implementation of the FPS genre on iOS yet. Unfortunately, this is all ruined by the litany of glitches and bugs that exist. After several hours of playing the game, I found myself so frustrated by the quantity and severity of the bugs that it took a good bit self-restraint not to throw my iPad with frustration. If Gameloft can patch N.O.V.A. 3, then it will earn its rightful spot as the must have game for every iOS gamer. But until that patch is released, I cannot recommend paying $6.99 for something so frustratingly buggy.