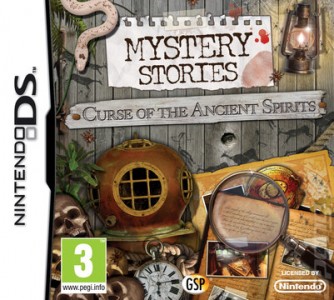 A string of disappearances linking all explorers and archaeologists who searched for Christopher Colombus’ lost ship sparks a sense of adventure in Virginia Carter, who along with her father, a famous archaeologist himself, embarks on to do what no one else has managed before them and discover the lost ship and return safely – setting the scene for this hidden object puzzle adventure.

In Mystery Stories: Curse of the Ancient Spirits, gameplay takes place in typical hidden object fashion, with you transitioning from hidden object scene to hidden object scene with a small amount of exploring and the occasional different style of puzzle thrown in for the sake of variety. The hidden object puzzles are laid out on the screen such that the top screen displays the information needed for the puzzle, like the list of items you need to be finding and an overview of the scene, keeping the bottom screen clear as a zoomed in view of the level which you use to gather items by identifying them from the background and tapping them. 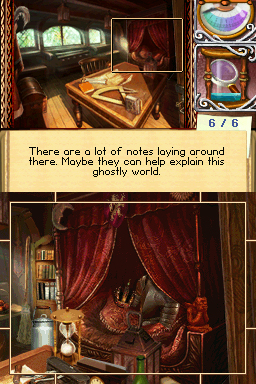 The bright colour scheme, simplicity of the puzzles and blatant tips prompting you on what to do next go to show that it’s a game aimed at kids, with a young-ish lead character setting out with her father giving someone they can relate to. That said, although the actual text-based hints and suggestions courtesy of Virginia’s monologues tell you exactly what to do, the hint system operated by the X button is awarded far too sparingly.

Sometimes you really can’t spot an object from the scene due to the way that objects are all blended in with the environments; not only are all related to boats in some way or are things you would expect to find on a ship, but smaller objects and larger objects which are concealed by hiding all but a little section of the item can present a challenge. In this case, you have to wait for the hint meter to fully charge before you can use it to direct you to a missing item, and the recharge time takes a bit too long to recharge given the frequency at which you will be wanting to use it. 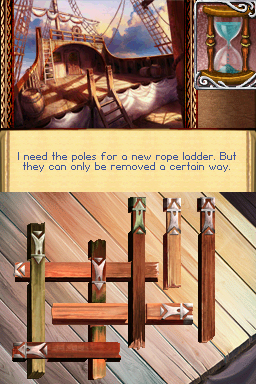 Found objects are greyed out (rather than collected as in most hidden object games) which makes more sense as you only make use of the useful items anyway – many are completely pointless. The few useful items are stored in your inventory, along with some or your devices which come into play during certain sections of the gameplay; for instance, a flashlight for dark areas and a pair of goggles to counter the fuzzy visuals effects brought on by entering mystical portals. The grey colouration even carries over into repeated visits of the same scene, meaning you won’t be forced to search for the same items twice. It is a shame that the game has to reuse hidden object levels in this way, but is forgivable as your adventure takes place on the rather confined space of a moderately-sized explorers boat, so some repetition was inevitable. 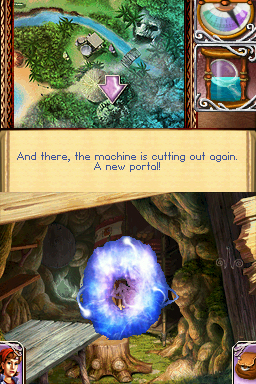 The sound does well to set the scene and create an inviting ocean atmosphere, avoiding any hint of anything sinister to suit the younger audience, despite the adventure taking place around a ghost ship with magical powers preventing the passage of time. Water lapping against the side of the ship, the wash of the waves and the squawking of seagulls all contribute to prevent you feeling like you’re in a bland object hoarding session, instead evoking a subtle feeling that you are actually part of the adventure.

On top of the main adventure mode, for some reason a ‘Freeplay’ mode rests on the menu screen for those who wish to revisit hidden object puzzles encountered in the main game. It seems a bit unnecessary as very few will feel the need to revisit particular puzzles as none are memorable and each ‘Freeplay’ version of a puzzle is exactly the same. There’s no backtracking in the story in a way that allows you to play the same puzzle, so I suppose the additional mode offers something that can’t be gained from the story mode, but its primary purpose is still not a relevant one. 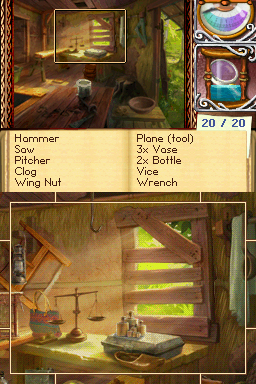 Overall, Mystery Stories: Curse of the Ancient Spirits isn’t the strongest example of the hidden object genre as critically and to the player’s discontent, objects can often be difficult to distinguish from the scene at hand. It has a kid-friendly plot about a lost ghost ship but story events such as those involving portals are fairly naff. These may not be lost on youngsters, but even then they will probably fail to work wonders for the majority of them. It’s been well suited to kids with the accommodating level of challenge, but it can’t mask the fact that it is still a relatively short-lived game assuming you don’t get stuck.