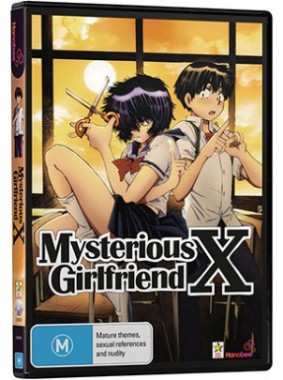 We’ve all been in love. We’ve all had that one girl/guy that has driven us crazy, that we’d do anything for, that maybe we would even die for. The type of love in Mysterious Girlfriend X is…not that kind of love. Bruno Mars said; “I’d catch a grenade for ya, throw my hand on a blade for ya, I’d jump in front of a train for ya”, and so on and so forth, but what Bruno Mars never said was “I’d constantly ingest a glob of your saliva…for ya”. I would like to say “read on and I’ll explain that” but I don’t think I can, STILL READ ON, but I can’t give an explanation on what exactly Mysterious Girlfriend X is. 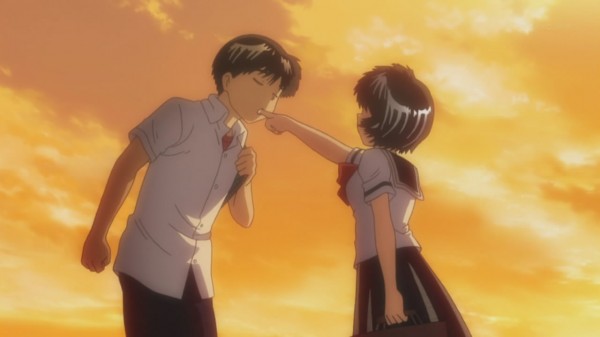 So, like, should you be doing that in public? Should I be watching this?

Bare with me on this one, everybody, the story is a bit of an odd one. Mysterious Girlfriend X follows the story of two crazy-in-love teens…well “crazy-in-love” may not be the right phrase to use but, anyway, moving on! Akira Tsubaki is a normal highschool kid, I guess I’ll say normal for now, that makes a “sweet” bond with a transfer student, a girl named Mikoto Urabe. One afternoon he catches her snoozing on her desk after school, he wakes her up and sends her on her way home but he notices that she’s left a little puddle of drool on her desk, out of sheer impulse he dips his finger in the drool and takes a big ol’ lick, obviously he’s disgusted and runs straight home to bed. A week or so passes and Tsubaki isn’t at school at all, he seems to have become sick. Urabe notices this and turns up at his place after school to which she explains to him that she knows he tasted her drool and is now having withdrawal symptoms because he hasn’t tasted it for a week.From then on they meet everyday to exchange saliva so that Tsubaki doesn’t go through withdrawals but the drool seems to do a lot more than just be gross; it’s a spiritual connection between Urabe and Tsubaki!

They become boyfriend and girlfriend, if you can call it that, and they become closer through the power of Urabe’s drool which, for some reason, can share deep feelings e.g. in one scene she touches her own boob, licks her finger and shoves it in Tsubaki’s mouth to which he then feels the exact sensation as touching a boob himself. She can even share wounds by doing the same thing. Yeah. Weird. Every episode is some sort of reiteration of that, Look the story is weak, possibly the weakest anime storyline I’ve ever seen. Romance in anime can be good, it’s just as good on this medium as any other…Mysterious Girlfriend X does it so, so wrong. The two main characters ARE dating and they consider themselves to be boyfriend and girlfriend yet their interaction is extremely stiff and incredibly awkward. The drool plays such a big part, too much of a part in this show. Instead of having the drool as a jumping off point leading into something different it became THE focal point, it goes so far that the couple don’t kiss or touch instead they share those feelings through exchanging drool. This happens every episode and there is no development, when there is development in the episode it always reverts back to being basic by the end. No lasting development. 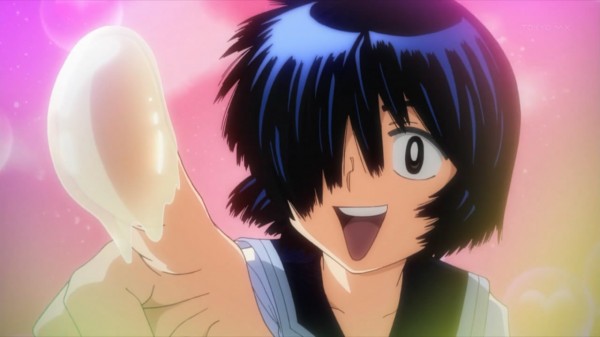 This is…not…my desired situation. Just get it away from my face please.

It seems like Tsubaki isn’t the only one that is cool to just taste others’ drool, there are a few people that are just fine with getting a mouthful, even another girl shares this crazy bond with Urabe and kind of lives vicariously through her and Tsubaki’s sexual experiences. The non-main characters don’t seem to interact very well; every guy is a massive perv and every girl is just so typically feminine. That’s not to say that Urabe and Tsubaki don’t interact strangely. It’s fine for Urabe to give her drool to another guy who isn’t her boyfriend but when Tsubaki asks if he can go meet another girl for a coffee, just as friends, she becomes extremely disappointed and even starts to cry. Urabe seems to carry a pair of scissors in her panties and uses it against her boyfriend whenever he upsets her and even tries to get close to her. It’s way too overplayed, just like the drool, and it gets really old really fast. Let me put all this in perspective: I was told by a workmate that the original series’ story was meant to have Urabe be an alien which would’ve made sense, in the anime, as to why her drool has these powers and why she acts so, how should I put this? Not like a human being! That part wasn’t put in so now it’s a normal girl who does all of this instead of an alien.  She even has a UFO pen and keychain so clearly they wanted her to be an alien. If she had been then the story would’ve made a lot more sense to be honest, well, a lot more sense than it is now.

There is just a great deal of repetition in the series, every episode Urabe has to ask the question “What are you doing, Tsubaki-kun?” and “What are your intentions, Tsubaki-kun?” which makes me, the viewer, want to scream; “The exact same damn thing he did in the last episode!” which…I did. The most mundane tasks are so overplayed. The characters react to any couple activity like it was some sort of ghost, dragon, demon, combination of all their fears, like they’d never seen it before and for all intense and purposes they never want to see it again. It was so incredibly overplayed and over exaggerated. Characters were basic, they never grew, they never learned anything and they never felt like real characters. The entire story was one big flop, I can’t honestly imagine any part of it that I found good. 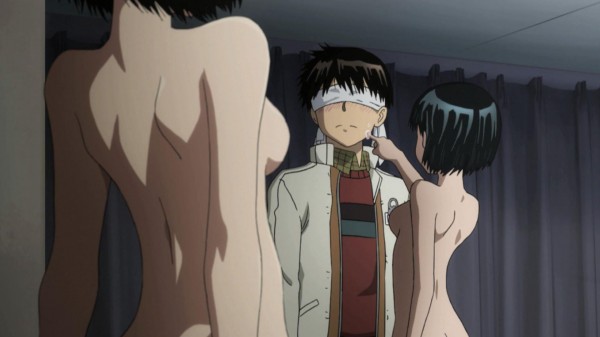 Anyone up for a manajatwa?

What I did like about this series was it’s old school, almost Tezuka-style art style. It looks really retro and really funky like it came right out of the 90’s but with the great animation we have today and the animation in Mysterious Girlfriend X definitely has good animation, they don’t really have a chance to use much of the animation budget, there are some scenes where Urabe is about to attack Tsubaki and the animation gets hardcore but they don’t often do that. The animation is fluid and the characters look fairly good. The backgrounds and backdrops look fantastic, they were done so well but we only really saw them in the first couple episodes. What looks great is when Tsubaki dreams, we see it four or five times throughout, they use CGI to portray a very Neo-Chinese cityscape and it looks damn good! If only the rest of it was that good. One thing I liked and disliked was how well/gross they animated the drool on the characters’ fingers, it was globby and disgusting and I had to look away from the screen at some points but they animated it well enough to make me do that so I guess that’s a plus. 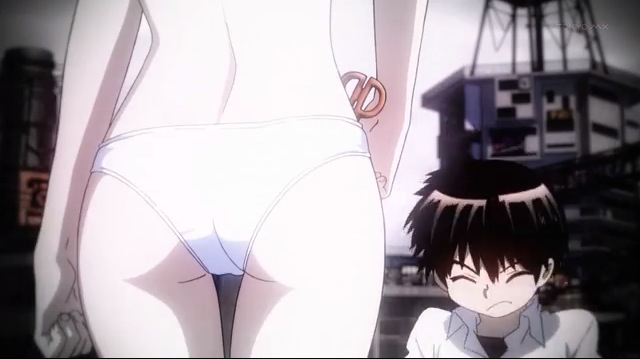 The voice acting is very, very good in this series, some voices are annoying but it doesn’t mean they weren’t acted well. All the voices were on par with a lot of other Animes that I’ve seen, I’m not saying it was the best or even in a league with the best but it was good enough to keep me even slightly interested. The music is fantastic! It’s very orchestral, there’s a lot of violin and trumpet. During different scenarios the music changes to fit so well like when Urabe gets ready to attack the music is just a great, big drum solo. As much as I hated the drool aspect they did one things right; every time drool was somewhere on the screen a small tingling tune would play and you’d know, even if not looking at the screen, that it was there. 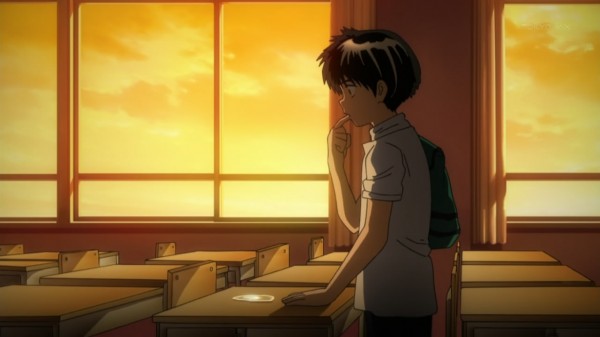 The extras are fairly simple. Basically it’s just the Japanese Promo video for the series and previews for other Hanabee series’. There’s also a nice piece of cityscape art on the flip side of the cover which looks great. It was a normal release so I really didn’t expect any more than that. I probably wouldn’t have wanted any more to be honest. 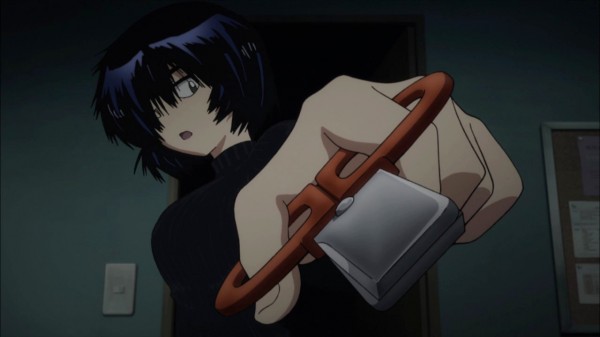 Look hold them up to my face if you need to but just don’t run with ’em. Scissors are dangerous.

If it wasn’t for the fact that I had to do this for review I would’ve stopped watching this series at episode 2. Despite how good the visuals and the audio is, which they are quite good don’t get me wrong, the story threw me off…big time! Not only was it just incredibly weird but the fact that the story didn’t go anywhere just made it worse. It could’ve been a normal romantic series about a boy and a girl who are in love and go through all the normal things but they had to centre it around drool and possibly the strangest female lead I’ve ever had to experience. I try my best to review from different points of view but I really couldn’t do it this time. Everything is great about this except for the story and that’s the most key aspect of a series, especially a series where action scenes, fantastic powers and great leads aren’t there to pick up what the story left behind. At the end of the day it’s my opinion and my opinion alone but I really didn’t enjoy this series, some of you out there might so if you’re willing give it a chance but go in with the expectation that it is going to be weird. Trust me.