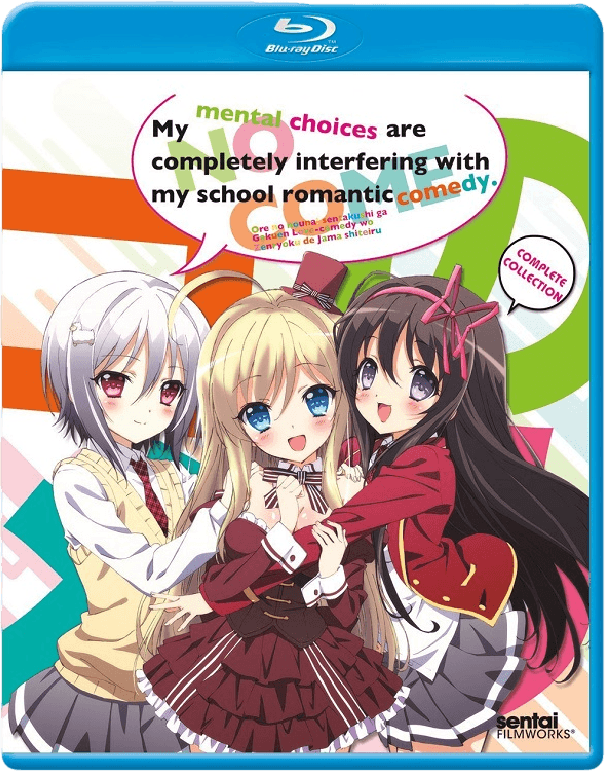 Overview
People make many decisions throughout their lives and although some of these decisions may seem unimportant, one never knows exactly what will happen. In one such anime that bears such a long name that fans simply called it NouCome at the time, the choices presented to the main character are far from ordinary. Now with Sentai Filmworks releasing My Mental Choices Are Completely Interfering With My School Romantic Comedy in North America, is the anime worth picking up?

Story
Kanade Amakusa was extremely popular back in middle school but now in high school he finds himself part of the “Reject Five” due to the many strange actions that his classmates see him perform. In fact, viewers find out why Kanade is so strange within the first few minutes of the series as he stumbles across a lewd magazine in the park. While hoping that the wind might blow open a page or two, a voice comes from above telling him to Choose. 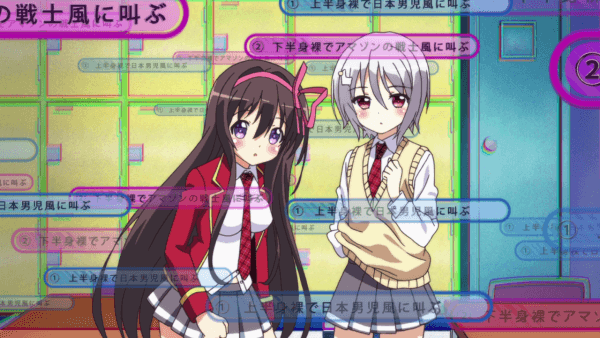 Accompanying this voice are two different choices that begin to fill Kanade’s vision, telling him to either put his face in the magazine and sniff it or to eat it. While trying to avoid making a decision, agonizing pain is inflicted on his head before he opts for option number one. You see, Kanade has been cursed with something called “Absolute Choice” and with this curse he is forced to make decisions that range from absolutely absurd to strangely perverse and everything in-between, making it impossible to guess what terrible situation he’ll find himself placed in next.

Due to his curse, only a handful of girls at his school still speak with him and that is due to their own quirky personality traits, with Furano Yukihiro’s strange tendency to tell insulting jokes with no emotion and Oka Yuoji’s generally carefree air-headed nature, these are the only two not bothered enough by Kanade’s strange actions to abandon him. However one day after school when Kanade must choose between his clingy middle-aged neighbor falling on him from the sky or a random girl, one more girl is added to the group. 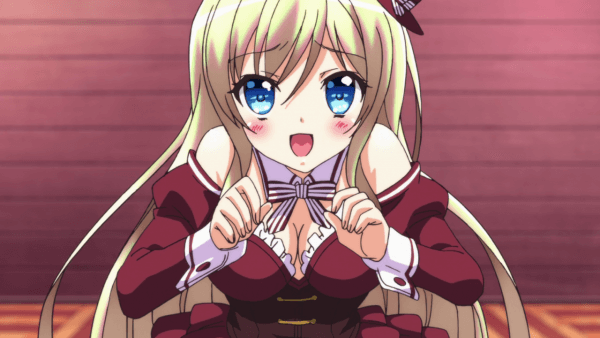 Proclaiming herself as someone sent from God, a beautiful girl who chooses to call herself Chocolat promises that she will help Kanade cure himself from the Absolute Choice curse which has been inflicted on him by God. Of course the actual God that laid this curse upon Kanade has vanished and the lackadaisical God that is now in that position seems to enjoy seeing Kanade struggle more than anything else as the amnesiac Chocolat acts more like a dog than anything else. Despite their ineptness they inform Kanade that he will be given missions to complete and if he manages to do so, he will be cured of his Absolute Choice curse.

With a goal in sight, Kanade finally sees the light at the end of the tunnel. Or at least that is what you think would happen but instead My Mental Choices Are Completely Interfering With My School Romantic Comedy is more a series about seeing just how crazy Kanade’s life can become while also exploring the girls close to him. Thanks to the fact that if he fails any of the missions given to him, he will suffer Absolute Choice forever, Kanade finds himself desperate to complete each mission no matter how absurd it might be. 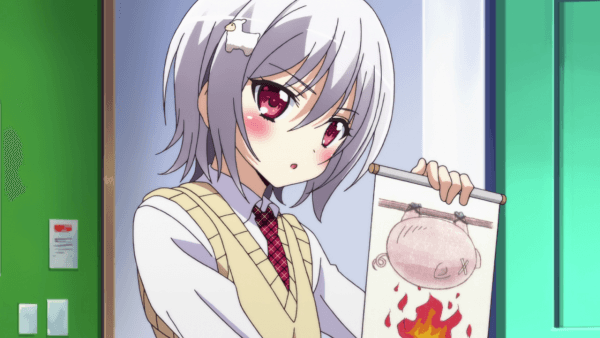 Throughout the course of the series, it feels like every episode has to be even more absurd than the one before it. With missions ranging from having a predominantly emotionless and unfeeling girl laugh from the bottom of her heart to getting certain girls, ranging from those he barely knows to those already close to him, to say they like him, and Absolute Choices that simply cannot be described as they have to be seen for the best comedic value, this one upmanship creates a ridiculously hilarious series where practically anything that can happen, though it does come at a cost.

Thanks to the comedic focus of the series and the number of girls that are in the picture, the story and most of the cast suffer. Throughout the series we do find hints as to what Absolute Choice is, how to possibly solve it, as well as who may be behind it but nothing is answered in the time-frame of the series as instead viewers are only presented with various changes to how Absolute Choice works. 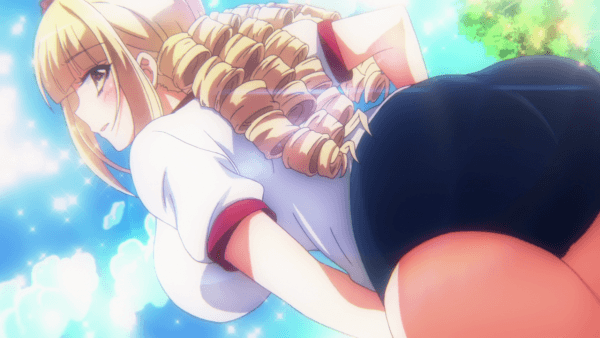 The same can be said about the many female characters. As mentioned before, many of the characters have their own quirks though it feels like only Yukihiro is explored in any meaningful way. Even Chocolat who appears to be the main heroine thanks to her role in the story is treated more as a gag than anything else though she does have one episode to really shine. As such, most of the cast that is introduced becomes nothing more than constant gags featuring a brother and sister obsessed childhood friend and a sadistic blonde with a secret hanging on her chest and nothing more.

Visuals
With the series being released on Blu-ray, the bright and colorful artwork really shines. The background designs are fairly standard though the flying text that overrides things in the environment with Absolute Choice is a nice touch. Something that this series does have going for it is great character designs. While most of the cast is a bit standard looking, the female cast and their different outfits and the amount of detail put into them is a really big highlight. It is also worth mentioning that although a number of revealing outfits are on display, the amount of panty shots can be counted on one hand and they usually only appear thanks to something in the story. 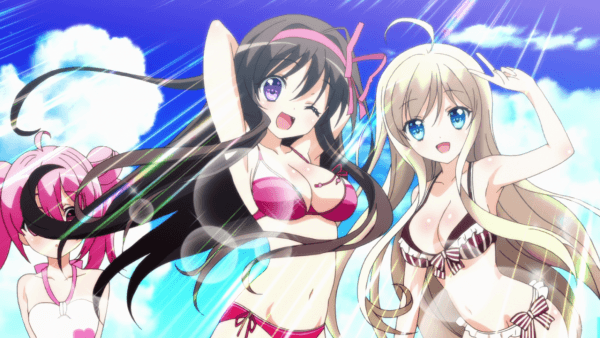 Considering how much text floats by in this series, especially whenever the Absolute Choice decisions appear, one must compliment how well Sentai Filmworks handled the subtitles for this series. They managed to properly and easily transcribe the subtitles onto the picture without any issue and give vierwes a chance to read the choices themselves, even if they are generally always read aloud anyways.

Audio
With the release of the series, Sentai Filmworks has only provided the original Japanese voice track. While this is a bit unfortunate, the Japanese voice actors really do make the series their own as the absurd jokes and events that take place fit perfectly with their voice acting. In fact this comes as a bit of a surprise as many of the voice actresses in this series have had very few big roles, meaning that many viewers will likely not have heard some of them before. 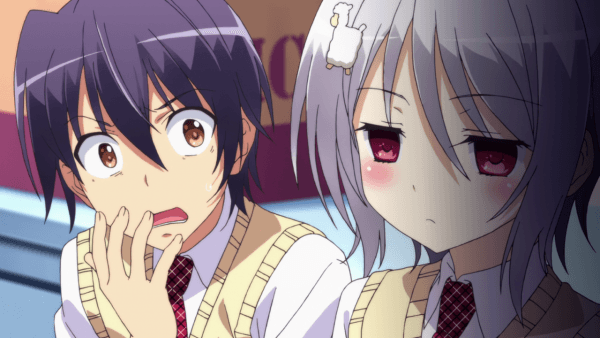 As for the background music, this series sports some standard themes that do fit nicely with some of the strange moments that take place but for the most part it is forgettable. The opening and ending themes are much better however as the opening “S・M・L☆” is a perfect fit for a series like this while the ending theme “Taiyou to Tsuki no Cross” by Two Formula is a more melancholic closer that shifts visuals depending on what girl was focused on the most in that episode.

Extras
This release comes with two clean opening themes and four clean ending themes, though the actual differences between each of these is quite minor as the songs do not change. Also included is the “Kataomoi Otome” OVA that sees Kanade and the main female cast dropped into a dating game where the only way for Kanade to escape is to complete a route. Though if you consider how Absolute Choice even appears in the game to ruin his chances, his routes are quickly ended thanks to ridiculous actions he is forced to take.

Overall
My Mental Choices Are Completely Interfering With My School Romantic Comedy is a strange series thanks to its premise that constantly sees how absurd everything can be. While the depth of the cast is disappointing considering the various hints that we are shown throughout the course of the series, where this series shines is when it is trying to make you laugh.

Ranging from complete random silliness to strange jokes and perverted humor, this show is as ridiculous as it comes and those looking for that type of humor in their romantic comedies need to look no further than this ridiculously long named series.