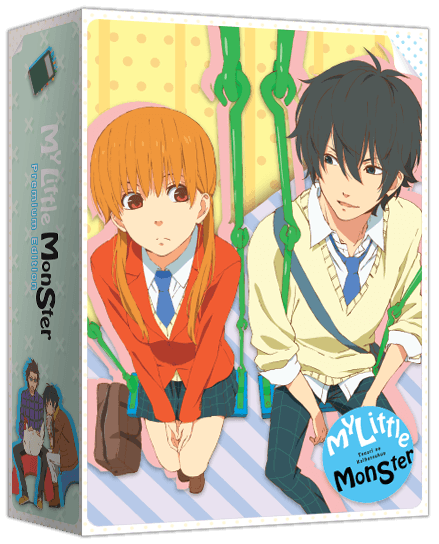 Overview
There are many different aspects for a romantic comedy to base itself around though so many base themselves around harem antics that they barely fall into that category anymore. Then there are series that try to use established formulas such as opposites attracting to try and craft an entertaining series, with one such series being My Little Monster. With NIS America bringing the My Little Monster anime adaptations over to North America, is the show worth your time?

Story
Shizuku Mizutani has had one dream that she has strived for since she was a little girl… being able to land a job that earns over a hundred thousand dollars a year. Due to this she has focused entirely on studying, going so far as to ask for study guides as birthday presents instead of toys as a child. Thanks to her solid focus on studying and ignoring everything around her, Shizuku was given the nickname “Dry Ice” to match her cold personality towards others. 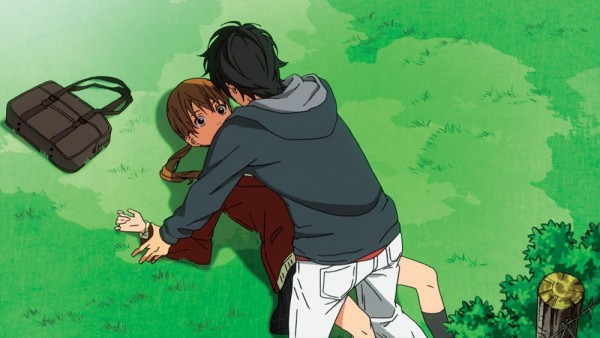 Despite being something of a model student who only focuses on work, Shizuku is asked by her teacher to bring worksheets to Haru, the student who should be sitting next to her if he hadn’t been suspended for fighting during the first day of school only to never return to class. When she arrives at where Haru is living the boy immediately misunderstands the situation and believes that what Shizuku is doing is similar to what friends would do for someone missing class.

After quickly confessing that he loves her after she steps in to prove his current group of friends are untrustworthy people, Haru begins to return to school.The only problem is, Haru sticks to Shizuku like glue and while the girl never thought of anything but studying before, the outgoing boy who has suddenly found his way into her life has left her rattled. To make matters worse, while Shizuku usually places first in the school test rankings she realizes that Haru is the only person in the school who is smarter than she is despite how he acts. 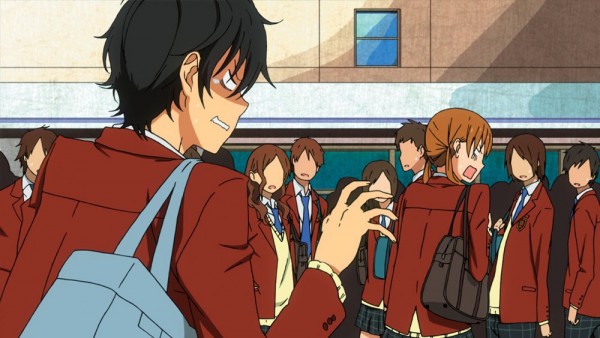 With the pairing of the cold Shizuku unwilling to show her emotions and attempting to put everything she has into studying and Haru who wears his emotions on his sleeves and can’t read social queues or act relatively normally most of the time but puts all of his energy into spending time with Shizuku, we find ourselves with two stark opposites and My Little Monster follows the pair’s relationship through highs and lows.

My Little Monster is a bit of a classic example of how opposites can attract. While it may be difficult to become invested in some romantic leads, thanks to both Haru and Shizuku being flawed characters that end up compensating for one another’s flaws creates a great combination at times. That being said, there are plenty of rough spots in their relationship due to the friction caused by their personalities. While Haru can be caring and seen as a good guy, he initially comes off as a brutish teenager with a child-like personality of easily giving into his emotions while Shizuku is level-headed but lives up to her cold nature by burying herself under heaps of books even when she does start to make a few friends. 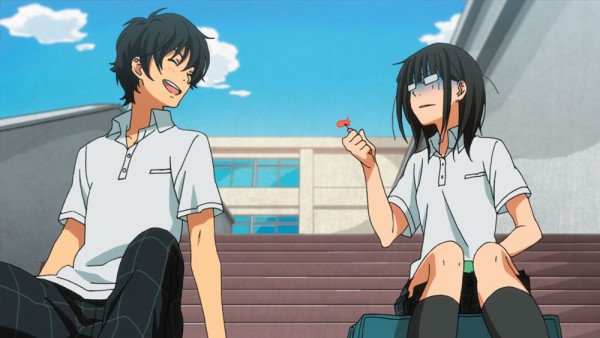 Of course thanks to these two working well together, we see Haru constantly being rebuked by Shizuku whenever he takes things a step to far or becomes too violent with others while Haru manages to bring Shizuku out of her shell and brings new feelings into her previously single focused life with the focus being on learning to deal with others and understanding your feelings. That being said, despite both characters proclaiming that they like one another very early in the series there is very little actual progression made throughout the series as both characters regress often enough to be problematic, especially since this anime adaptation was created before the original manga ended.

There is something that can be said about the series’ brand of humor however as it is as quirky as they come. Thanks to Haru’s personality he often ends up doing random things, with a running joke being a rooster that he ended up taking in and building a coop to shelter it on school grounds. On the other hand, thanks to three of the four members of the main group having very few friends or interactions with others we see plenty of sharp quips and retorts anytime the group gets together which makes for some rather humorous scenes where they hold little back. While a quick joke is made during an episode how Shizuku told Haru to wait for her to think about how she felt only for a month to pass with her forgetting entirely about it, it becomes something of a theme in the series that doesn’t feature much of a payoff since barely any of the characters are given much in the way of development. 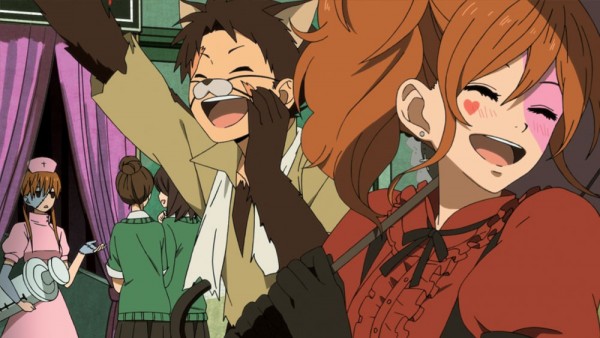 Sure we do learn some details about Shizuku and Haru’s lives and the addition of a number of side characters, including a beauty named Natsume who dislikes most boys because they make other girls not like her, and the friendly baseball player Sasahara help flesh out the group and contribute to the humor but in the end viewers will likely feel unsatisfied with how the show plays out. That being said, although My Little Monster doesn’t really try anything fresh it still feels rather heartwarming due to Shizuku and Haru’s interactions and how their relationship, albeit slow paced and oft backpedaling, develops over the course of the series.

Visuals
For the first time in quite a while NIS America has released a series that comes in both DVD and Blu-ray formats, which is a nice touch for those who still haven’t upgraded to the format but obviously the choice you want to go with here is the Blu-ray discs. My Little Monster features some rather standard character designs but the background art is highly detailed at times thanks to a number of events held at the school. 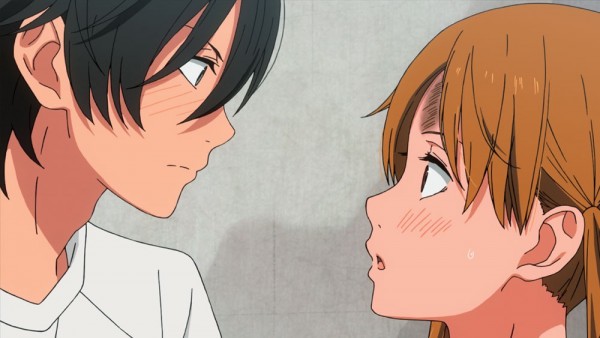 It is worth noting that there are some moments of choppy looking animation in the series but when the series slows down and focuses on a silent moment between characters it really shines, especially when it comes to the way facial expressions are handled. While most of their expressions can be simply used for laughs, these simpler moments express quite a bit of emotion between a pair of characters, especially whenever Haru and Shizuku have a touching moment where they aren’t arguing with each other.

Audio
NIS America has released My Little Monster with only the original Japanese voice track accompanied by English subtitles. The Japanese cast features quite a number of veteran voice actors who handle the characters well, especially in regards to Mizutani as her usual dead-pan retorts work exceptionally well thanks to Haruka Tomatsu’s handling of her character. 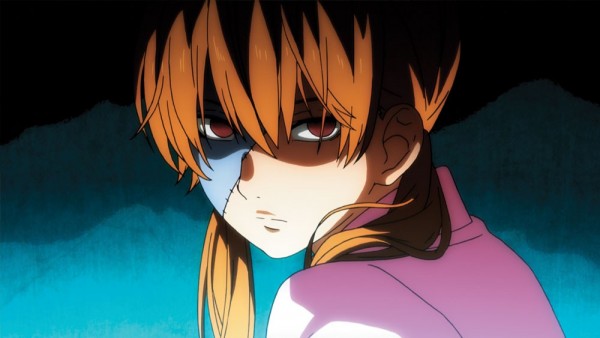 The soundtrack for the series is fairly predictable for a romantic comedy by not really offering anything exceptional but simply comes across as adequate. The same can be said about the opening and ending themes of the series, with the opening “Q&A Recital!” sung by Mizutani’s voice actress is fitting for the series but is largely forgettable while the ending theme “White Wishes” by 9nine is similar to the opening theme’s tone and works well as a closer for most episodes.

Extras
My Little Monster has been given the premium edition treatment by NIS America with their now standard DVD height chipboard art boxes replacing the oversized containers that many people seemed to have found awkward. The actual on-disc bonuses are rather slim as they only feature a clean version of the opening and ending theme, trailers for other series, and a clean version of the first episode’s ending. It is worth noting that the OVA episode released a year after the anime ended in Japan is not included in this release. 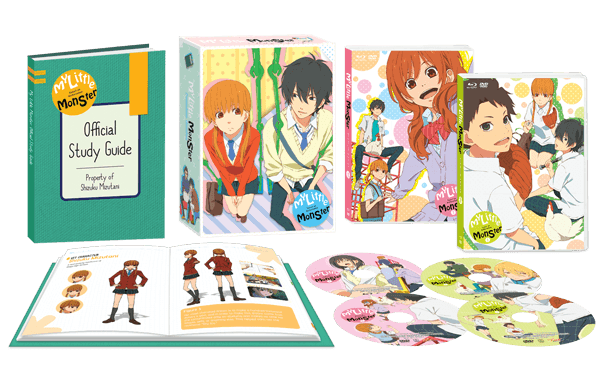 As for the packaging, the chipboard art box feels a bit less impressive than some of NIS America’s past offerings but still features some nice looking artwork while containing the series in two DVD sized cases accompanied by a hardcover art book titled that is presented as Mizutani’s official study guide. In the art book there are the usual episode summaries, character details, a look at some of the background art, and some official artwork promoting the anime.

Overall
My Little Monster is a romantic comedy that feels like it doesn’t know where to go at times. The combination of Mizutani and Haru is an enjoyable one as we see the pair struggling to mesh together despite their personality flaws and slowly growing closer with each other however far too often any development is dismissed in order to extend the series. Thankfully with some rather enjoyable looking moments between characters and plenty of good humor to go along with the drama, My Little Monster still manages to be a heartwarming anime once you start to see past the main couple’s flaws.