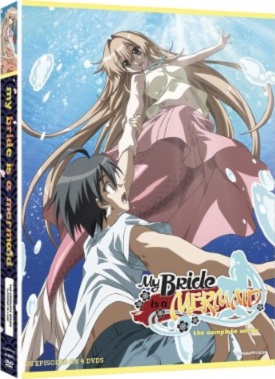 Overview:
The ocean is a huge place, one full of mystery and romance. One of the longest running legends of the ocean was that fantastical creatures swim beneath the waves. The most popular of these creatures is the mermaid, beautiful women who live beneath the ocean and are half fish, half women. But what if these creatures weren’t just myth and legend but a secretive society hiding its presence from the world? In My Bride is a Mermaid, their secret is about to be exposed and that is just the tip of this tale of the deep.

Story:
Whenever a family takes a vacation to the beach they can expect a few standard things to happen. This includes some sunburn, family memories and plenty of swimming. One thing that a family would never predict happening however is their son marrying a mermaid. However while on vacation to Seto to visit Nagasumi’s grandmother the Michishio family encounters something that will change their lives forever. Their daughter-in-law. 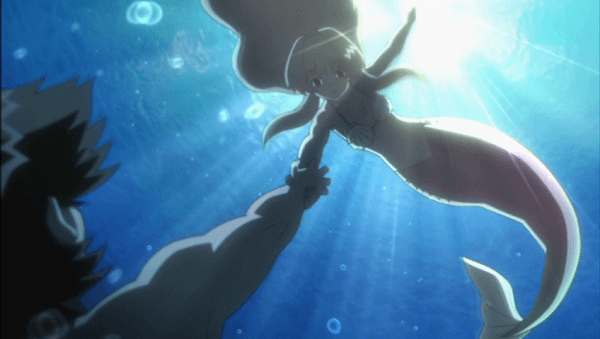 While swimming in the Seto Sea Nagasumi Michishio begins to drown out in the middle of the sea and no one can even hear his pleas for help. As he sinks below the surface of the water he begins to lose consciousness, however a beautiful mermaid appears out of nowhere to save his life. Despite this strange occurrence, none of his family believe a word that he says until said mermaid shows up at their house and introduces herself.

Her name is Sun Seto and she has dire news for Nagasumi, according to mermaid law either he or she must be killed because he saw her true form. The only way to avoid their deaths is if the two marry one another. While Nagasumi may be more than willing to marry this beautiful young mermaid there is one big problem… and that is the fact that Sun is the daughter of the Seto gang leader and nearly the whole Seto gang would rather see him turned into human sushi than marry his daughter. Now Nagasumi not only is married to the beautiful mermaid Sun, he has to keep her secret from ever being discovered by the rest of his human friends all while trying to survive constant threats on his life from Sun’s family.

This unique combination of elements not only throw Nagasumi’s normal family life out of whack, but even his school life as well. But do you know what? It is all the better for the viewer that it has because My Bride is a Mermaid is one of the funniest anime you’ll see all year. Now while some comedies may only revolve around a few jokes that grow stale after a short time, My Bride is a Mermaid always has something new that comes out of left field to surprise the viewer and leave them laughing. 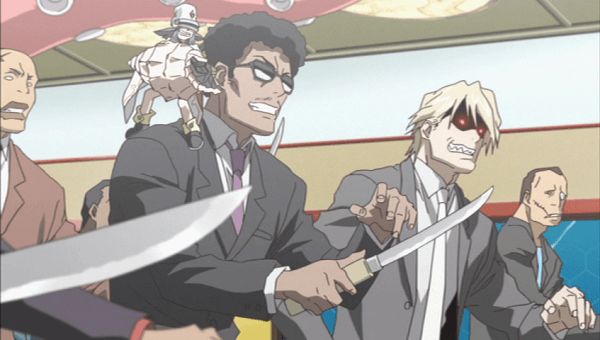 Barring the occasional serious moment, there is usually always something funny happening every minute. If jokes were a liquid then My Bride is a Mermaid’s cup runneth over. To make it even better, there are jokes for every type of comedy viewer. There are tons of gags all over the place and simple jokes, situational humor, violent humor towards the main character, sight gags and others as well as plenty of parodies at Japanese shows and even Hollywood movies.

What makes the jokes hit even harder is the hilarious cast of characters that flesh out the cast. The main character of the anime is Nagasumi who feels a bit more relatable than your standard harem lead thanks to his personality. While he does end up having a multitude of girls falling in love with him, both mermaid and human, he tries his best to stay true to Sun and stand up for himself rather than be a useless or wishy washy male lead like we usually are treated to. 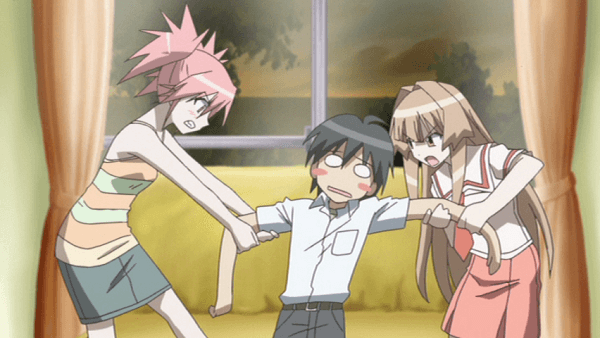 Then there is Sun who is a very dense and a bit of a ditz who always ends up getting soaked with water but is also very admirable with a chivalrous spirit who always tries to stay true to her family but will come to the defense of Nagasumi every time. Finally we have Lunar, the biggest love rival of Sun for Nagasumi’s feelings who not only has a split personality but also deep emotions that shine all the more when compared to her sadistic exterior. That doesn’t even go in to all of the other hilarious characters that viewers are treated to, such as Sun’s violent and overprotective family, Mawari, the daughter of the police chief and an orca named Kai who is afraid of the outdoors.

One drawback about My Bride is a Mermaid is that the entire basis of the show is a bit generic and cliché. While the genre as a whole has seen plenty of shows and the mermaid twist does smooth out some wrinkles as a whole the whole series lacks a bit of originality. The characters are mostly one sided and are always used for the same type of jokes, so it is easy to predict what type of joke may come next depending who is on screen at any given time. That doesn’t mean you won’t be laughing when it does occur though, as you’ll likely spend 90% of your viewing time laughing at something in My Bride is a Mermaid.

Visuals:
When Gonzo and AIC worked together to bring My Bride is a Mermaid out in Japan they certainly spent a lot of care on certain parts of the anime, but it is also noticeable that the budget for the series was limited. There are a couple of instances where Lunar and Sun have stand out moments or perform songs that the quality takes a jump, but for every high there is also a low. Such as a moment where a high level action scene could have taken place, but instead stick figures (literally) play out the scene instead. 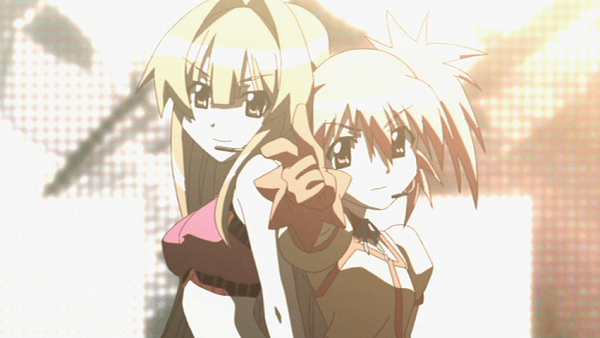 The character designs and animation is quite consistent, though the designs as a whole seem a bit bland and except for specific dramatic moments, have minimalistic amounts of detail. The character expressions are a highlight of the series however as a wide amount of variations in the art style and quality are purely for comedic intent and usually succeed wildly.

Audio:
As standard with FUNimation’s releases My Bride is a Mermaid comes with both the English and Japanese dubs. For purists out there the Japanese dub comes with suitable subtitles and the Japanese voice cast is perfect in their positions. As such one would expect the English dub cast must also be suitable and the cast provided by FUNimation for this dub have performed the job swimmingly. 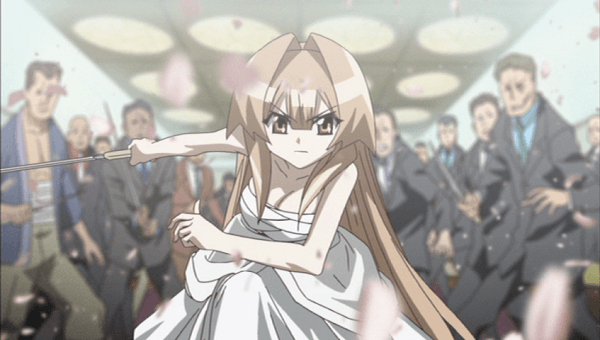 As one would expect, FUNimation’s English dub honestly could not translate everything literally as a number of the translations wouldn’t make too much sense in English. As such the translations and the humor are mostly faithful to the original. The voice cast themselves also outshines their Japanese counterparts as Todd Haberkorn’s Nagasumi performance feels like an improvement from the Japanese voice actor. Sun also has a very interesting dub as her character uses a bit of a different dialog and will usually say things such as help ya instead of help you or tryin’ instead of trying. This makes her character more fleshed out and believable being that she comes from a family of gangster mermaids.

Something that deserves extra praise is all of the inserted songs in the series. All of the normal background songs that have been inserted are still in Japanese and English subtitles appear to let the viewer know what they mean, but all of the songs sung by the characters themselves have been completely redubbed in English. This is quite a delight as both Alexis Tipton, the voice of Sun and Cherami Leigh, the voice of Lunar sound amazing when they perform these English adaptations.

Extras:
Unfortunately My Bride is a Mermaid does not contain a lot of extras. There are your standard inclusions of clean versions of the opening song and the two ending songs as well as trailers for past and upcoming FUNimation releases. Also it is worth noting that the ending song in My Bride is a Mermaid has been altered from the original, with a static background rather than the original fully animated ending animation. As such, the clean textless songs feel a tad useless for both ending songs as they both feature static backgrounds. 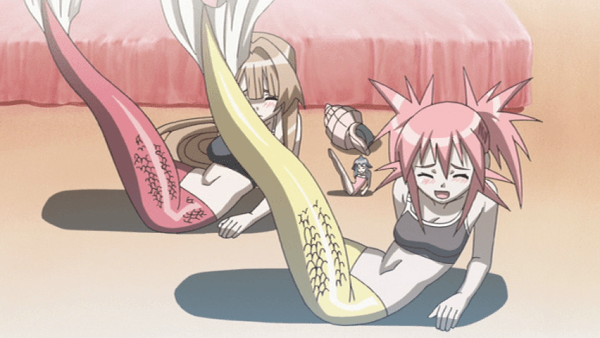 Overall:
While the story as a whole may not be very interesting when looked at with a serious eye, the comedic value found in My Bride is a Mermaid is staggering and is something that should not be missed. There is something here for everyone with laughter going a mile a minute. With twenty four episodes this means you will be spending hour after hour seeing the antics of the Seto family, Nagasumi, his mermaid wife Sun, and all the side characters as they try and adapt to a normal lifestyle, interact with humans and avoid exposing the mermaid world to those around him. Underneath all of the comedy the enjoyable characters and building romance between Sun and Nagasumi make this romantic comedy something that should not be missed.