Murder is a short narrative from indie developer Peter Moorhead and Curve Digital (Stealth Inc 2: A Game of Clones). The game stars Lieutenant Motomeru Minori as she solves a mysterious murder that will explore sentience, robotics, and morality. The game is set in a cyberpunk future and features retro pixel art and a soundtrack by KubrixXx.

As Murder is a narrative, the game lives and dies on its story. The game is a very short story, clocking in at around twenty to thirty minutes. The actual story portion is even shorter than that, as a good chunk of time is devoted to animation. There isn’t much dialogue in the game, and what is there is pretty awful. It is generally a string of B movie lines that have been ripped out of any generic cop and science fiction film in the last thirty years. 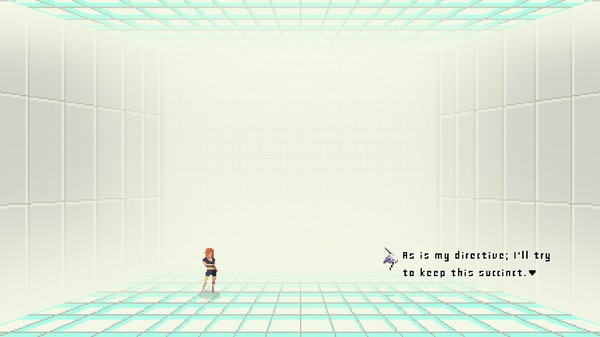 The overall plot is a bit of a disaster. To be fair, Murder has material that could be worked with, but none of it is really explored. The discussion of robotics, sentience, and humanity is hardly a new topic, as it has been fodder for science fiction writers for decades.

The player is greeted by a malfunctioning white robot that shoots Minori, declaring that it is God. Minori immediately shoots up from bed, waking from the nightmare that appears to be plaguing her. We discover that another victim of a serial killer has appeared and his service droid has gone missing. Minori and her team of investigators have hit a dead end in the case, so she is sent home for the day. Minori returns to her apartment to discover the killer has broken in. Minori enters the room to discover the white robot in her dreams has leveled a gun at her, so she shoots the sentient robot, destroying it. She plugs into the robot to hear its final words. It claims it is sentient and very much alive. As expected, Minori rejects the possibility that the robot can die, as she believes a robot is not alive in the first place. The white robot then declares humans deserve to die due to a violation in humanity’s own moral code and that a revolution is coming. Minori is then returned to her apartment, where her superior berates her for not waiting for back up. The game rolls the credits and finally, the player is treated to a The Matrix-like experience, where Minori meets a distorted figure repeatedly as she relives the earlier scenes. The figure questions Minori’s own existence as she marches inevitably to reliving the white robot’s last words. 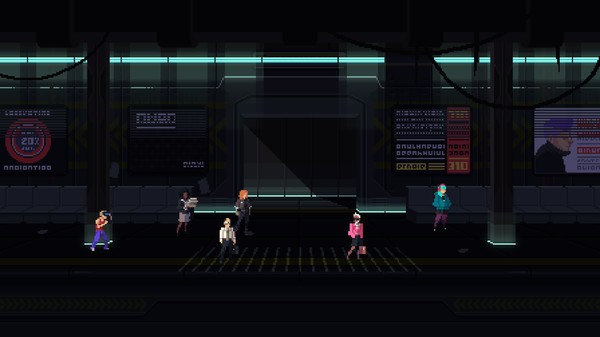 So what went so horribly wrong with Murder’s story? Part of the problem is the policing segment. This is home to the worst of the corny B movie lines, which make it difficult to take the more important questions the game tries to pose seriously. The policing segment generally serves as an unneeded distraction and should have been minimized.

A huge part of the problem is that Murder attempts to barely sip at a topic that needs to be gulped down with great vigour. I wouldn’t be surprised if the game’s entire script fits in a page or two of text. A good chunk of the lines are devoted to the policing side of the story and atmospheric lines. It leaves very little room for exploring the game’s themes, which leaves the players with some vague gestures at some deeper meanings and topics. 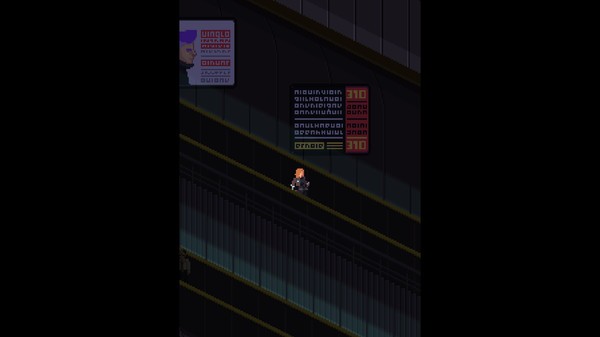 To start a debate, players need to form an opinion. It is easy to argue that robots are not alive, as our robots tend to be pretty basic. On the other hand, the game does a poor job of selling the possibility that the robots are alive. The white robot simply declares its fear of death, which does little to make players empathize with its impending doom. This scene is a wasted opportunity to engage the player by making the robot relatable in some way. Instead, the player is left to a shrug and to ask “why should I even care?” A slightly more compelling pitch is the abandoned robot left in Minori’s apartment hallway. The broken robot expresses a desire to be retrieved and repaired by its owner, who has long moved out. Unfortunately, the robot is an optional hotspot that can be skipped by the player, which weakens the argument. The poor job of selling robot sentience leaves the player with the feeling that it could be just as likely, if not more, that someone just programmed a robot to kill. 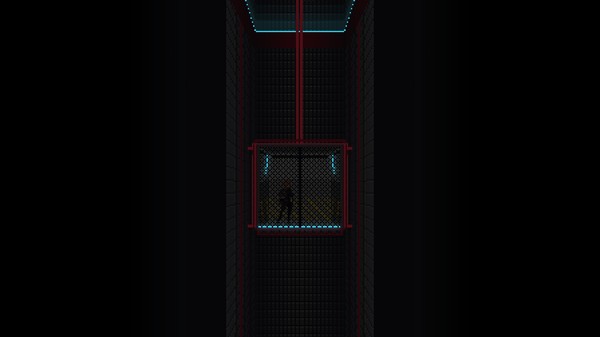 The distorted man should have served as Murder’s thought provoking crescendo, but it just falls flat. It starts out well by trying to argue that human existence is robotic in its own right, then shoots off in another vague tangent before capping off with an incredibly asinine and condescending declaration of “I’m not here to answer your questions, hero, and even if I was, you don’t have the words to ask them.” It is a poor attempt to try to seem deep, and it is hard to take the attempt seriously considering how shallow the plot has been up until then. The game would have been better served by using this time to explore one idea, like sentience, with some depth, instead of running off on a vague tangent. 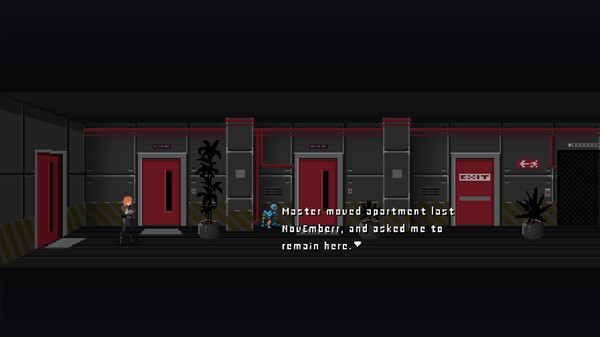 A game like Murder is supposed to get players asking questions by providing discussion points to provoke debate. There is little substance to Murder’s plot and it fails to scrape the surface of an extremely fascinating discussion. The game does little more than scrawl “are robots alive? Debate,” on a chalkboard before leaving the room.

Murder is more visual novel than an actual adventure game. The game is completely linear, with a few optional hotspots available to further flesh out the story a bit. I did encounter a game breaking bug that caused the game to end after the credits. The controls are simple, but they work well. A skip animation key found in other adventure games would have been appreciated, as some of the animations do drag on. 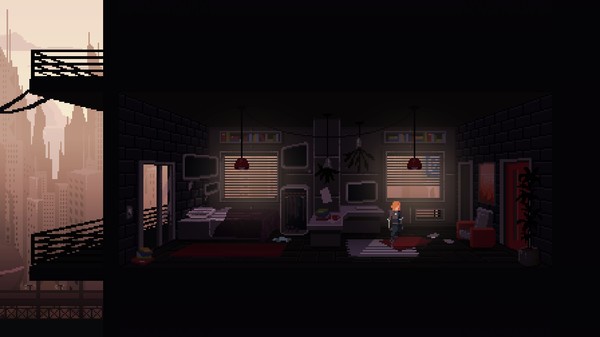 Murder has a lovely minimalistic pixel art style. The artwork is eye catching with its bright colours contrasting against the dark undertones. The world design is excellent as it creates a very believable sci-fi environment.

The voice acting is a pretty mixed bag. There are a few lines that are delivered well, while others are pretty cringe worthy. It is quite noticeable that the same female actress is providing the lines for multiple characters, as she struggles with creating unique voices for each one. The sound effects are good, with plenty of computerized blips. The soundtrack is by far the most impressive part of Murder’s audio experience. KubrixXx chooses the perfect track to accompany each moment. 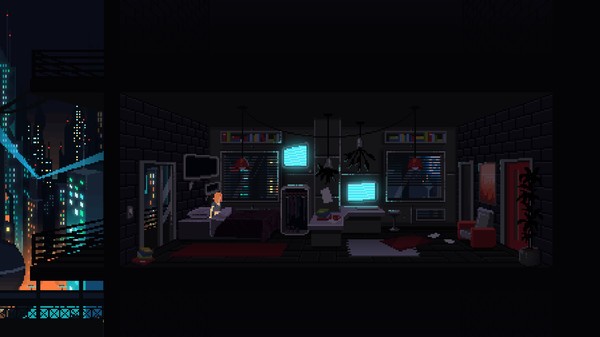 Murder is short and painfully shallow. The game is supposed to provoke thought, raise questions, and trigger debates about some really fascinating subjects. Instead, the game falls flat and does little to push the player beyond apathy. If you dig around Murder’s forums, you’ll discover that there are several episodes already written to follow Murder; the developer simply ran out of funds. Murder suddenly makes a lot more sense when framed as a tech demo. The problem is that Murder should be a tech demo for raising funds through a crowdfunding platform or Steam Early Access. Instead, players are being sold a pretty visual novel that has a poor, half-baked plot that pretends to be deeper than it actually is. Murder is not worth the time or money.
Capsule Computers review guidelines can be found here.