If you get a feeling of deja-vu while looking at screenshots of Munch Time, you could probably be forgiven. A cartoon animal platforming across various levels, all of which include three collectible stars, is nothing if not the ordinary in today’s mobile games. Does this chameleon’s adventure stand out from the rest, or does it blend in to the forgettable background? 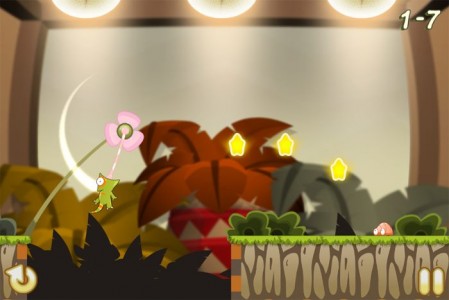 Munch Time puts you in control of an adorable little chameleon named Munch. As you can probably infer from his name, Munch likes to eat; squirmy, juicy grubs in particular are one of his favourites. So it’s up to you to get him across dozens of levels so that he can get his little reptilian belly full of yummy protein-rich bugs. And try to collect the stars along the way!

At it’s core, Munch Time is a two-dimensional, physics-based platformer, and the game succeeds in getting the best out of a simple tap control scheme for this purpose. Munch can grab onto various flowers with his tongue to traverse the game’s levels. These flowers each have different effects on platforming, doing everything from spinning Munch around, to turning into cannons ala Donkey Kong, to helicoptering Munch upwards.

To take into consideration when using any of these is Munch’s momentum and direction. The angle and distance from which you grasp on to a flower and the timing of your release of it will invariably affect how effective you are in moving Munch across levels and in collecting those pesky three stars that are on every level (and yes, they’re  just as addictive to collect here as it in other titles). Also, flowers are only activated when Munch is a certain colour, so to use blue flowers rather than green ones, you must first guide him to a blue colour-blob (it’s never made too clear why there are paint-drops left in suspended animation out in the wild, but it serves the game, so I’ll let it slide) which will change his appearance to (you guessed it) blue. 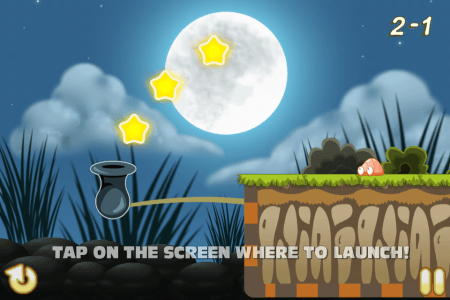 Aside from the challenge of star-collection, however, the level design of the game is a bit basic. You’ll breeze through most of the first “world” of levels and only be slightly more challenged in the second. That said, an update has recently been released for the game and the new levels and new flower type add quite solidly to the established formula, and if Gamistry keep it up, you’ll have reason to return Munch Time in the coming weeks.

All in all, Munch Time gives players a solid platforming experience that cleverly uses a simple control scheme. It can, however, be argued that the game is too simplistic in both its difficulty and control scheme, and to really get a lot out of it, you’ll have to hope that Gamistry keep the updates coming. 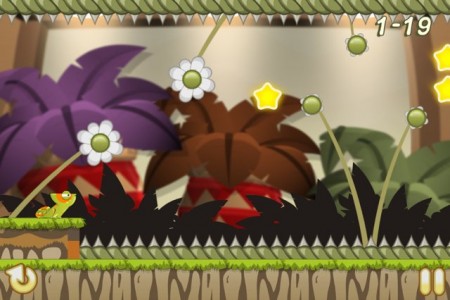 Graphically, Munch Time doesn’t do anything spectacular. Yes, Munch is a cute little chameleon and the levels are vibrantly coloured, but there are many games out there that have provided far better renditions of the cartoon style. Its presentation is simply average in almost every way.

The game’s sound design is similarly lacking in distinctiveness. The standard for a title is to provide a merry menu theme and cutesy sound effects in-level, and Munch Time achieves this. But again, it doesn’t really go above the usual, and it fails to differentiate itself from the myriad similar titles out there. 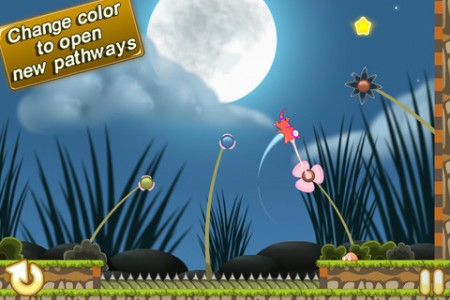 Munch Time is a game that does what it needs to do well, but no better. It does not stand out particularly from similar products on the market, and its simplicity does no favours to its longevity, but if you’re looking for a new physics-based adventure to take with you on your morning commute, Munch Time should help to pleasantly occupy your time.