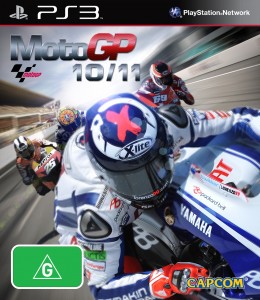 Game: Moto GP 10/11
Publisher/Developer: Capcom/ Monumental Games
Genre: Motorcycle Racing Simulation
Console: PS3 (Reviewed), Xbox 360 – Exclusive to PS3 in NA
Price: AUS  $89.97   Buy here USD $38.25    Buy here
Moto GP 10/11 is the latest game in the annualized franchise published by Capcom. Aiming to take you down the track of realistic super bike racing, the best comparison to make is that this game strives to do for motorcycles what Gran Turismo did for cars.  The goal of the game is to compete in races across the world and become the next big name in motorcycle racing.   Think you take on the challenge and be a pro? 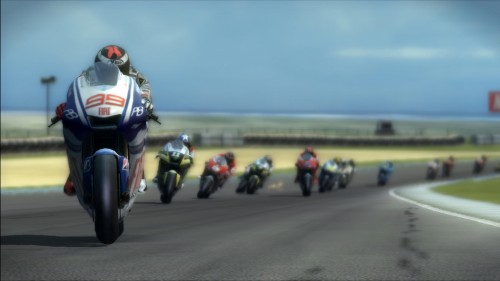 Starting out in career mode, the game asked me to create a team name.  Hence, the Jedinator team was born.  Customizing bikes, appearance and picking a home track was the next item on the agenda.  If your dream is to build the ultimate bike, then this game will be like heaven.  From struts to tires and shocks to gearing, there is literally no option you can’t tweak, no equipment piece that can’t be tuned to your heart’s perfection.  Being that I’m not much of a “mechanic” guy, I found it a bit overwhelming, but most gamers will appreciate the immense options available .  Of course, if you want mess around with colors and styles, you can do that too, although there are not quite as many  options available  to you in this area.  All the color schemes for the bikes and rider costumes are preset. There are many different presets, but the failure to include the ability to create your own designs is a real downer.

Heading down to the racetrack and just getting started, like I did, is also a viable option .  I chose the easiest difficulty level, Gentle, when doing this.  This turns all the assists on, helps stabilize the bike and it shows you where the best racing line is.  There are at 4 other difficulty options available, and these range from turning some of the assists off to turning everything off, making the AI tough and trying to give you the most realistic, simulated biking experience possible. 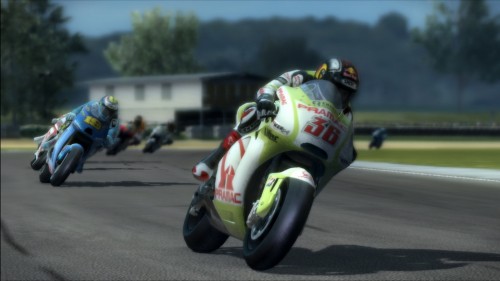 So there I was, representing team Jedinator and about to start practicing for the first race of my career. The starting lights & sounds finished up, and I gently pressed the accelerator. Initially, I thought I was doing pretty good. And then I hit a corner.  Even though I slowed down, I went off  the side of the road.  After a few hours of this, I gradually got slightly better at the game, but I’m afraid I am just not cut out to be a racer.  I was constantly wrecking or driving  off the track.  If your a casual racing game fan, you may want to try to the game out as a an entry into the hardcore videogame racing arena, but be cautious .  It will more than likely take a bit to get the hang of all that the game has to offer, even when all the assists are turned on and the all to helpful tutorials and voice overs are helping you.  On the other hand, the gamers who live on the bread of simulated racing will be right at home with this game; this is built for them.

Besides career mode, there is the option to create your own championships customized with track choice, laps and whether this is to be a single event or tournament. Multiplayer functionality is also present  in the game, and you will be to play via split screen or online.

One feature I didn’t expect to be in the game was secondary objectives.  However, these were in the game, and they offered a brief respite from  merely trying to jockey for position.  Sometimes secondary goals consisted of trying to set speed records on a certain part of the track. Other times, the goal was to to pass another rider within a certain time. There were quite a few to complete, and when completed, you would get more points to spend on customizations for your bike.

One other really cool trait in the game is the opportunity to rewind for about a minute during any part of the race, thus allowing you to perfect your racing line or avoid a crash.  Its too bad though that this option is buried in the menus, and not hot keyed to a a face button.  In addition, rewinding more than a minute would be great.

After every race, you can view a video of your performance, and all the rewind, fast forward, pausing buttons, etc. are included.  Nonetheless, I did not see any options to upload videos to a server for others to view.  In fact, there were not even any options to save them locally  on a hard drive.  No pictures could be taken & saved either. 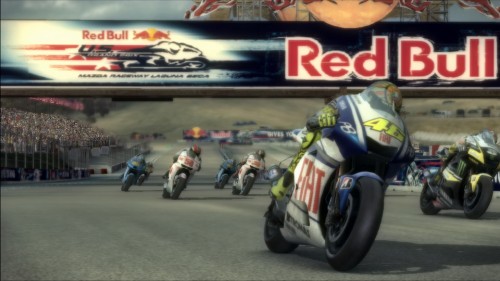 Other than just simply creating a racing game though, the career mode also tasked you with being famous.  In order to do this,  you can sign sponsorships and the like.  To get the big bucks through sponsorship though, you have to be a pretty good racer.  Hiring others to do PR work is a valuable way to earn a fortune, get money and be famous.  So, in a way, the game strives to give you the whole enchildada in terms of a racing career.  Nevertheless, one item i would like to see improved is the addition of more elements of racing culture .  That is, instead of just providing statistics and making it all data, there should be more of a story and emotional component to the game.  For example, at the beginning of every race, there are film crews, bikini clad girls and pit crews.  However, at every race, they are the same people, performing the same generic animations, and they feel like they were just put in there as an obligatory gesture. The stadiums are also filled with bland, barely discernable fans that have a standard “bustling crowd” soundtrack.  It would set a new bar in sports games if next years iteration of the game would expand both of those elements.  Perhaps they could have you actually meet and talk to fans or sign autographs. Instead of seeing the same people at the start of each race,  maybe it should be possible to flirt with these models and choose them yourself (just throwing out ideas here. )Another way to improve upon the game is to have the option to perform side missions as these characters, like performing the job of the cameraman.  One final change that could be made is to actually be able to meet your PR reps and the people you hire, and this would enable you have a much better grasp on what these people do.  This may upset some fans of the game if they put these options in the game, but there should be an option to choose between the classic career mode and the “enhanced” mode. Regardless if they make these changes or not though, this years game it is still a great racing game that will fulfill your speed addiction.

As long as we are on the subject of improvements to the game, lets talk about the graphics.  Not to say that they are bad, but they are also not spectacular.  There just there, functional, but not enough to truly put you in the experience. Grass, rocks, and other surfaces, plus people and signs, could use a graphical overhaul to compete with  this generation of games.  You’ll probably be speeding along so fast that you won’t notice this shortcoming most of the time, but is a an area of the game to consider making better. 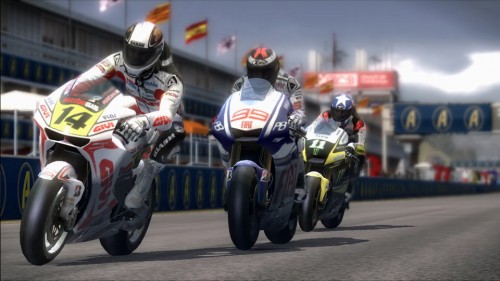 Graphics may not be the best, but audio in the game is praiseworthy. A variety of music will help keep the adrenaline pumping as you scream around the track doing 150mph.    The voiceover work was also done well, and the guy doing it didn’t  just sound like he was reading lines.  He genuinely sounded like he cared about your progress in the game, and he felt like the person  he was, not some robotic voice that would have been incredibly annoying.  Other  sounds in the game, like engines, sounded like they were supposed to, although I am no expert on such areas.

One final compliment for the  game is that the loading times are extremely fast.  It only took a few seconds to load up any of the tracks or modes, and menus were loaded very quickly as well.

Moto GP 10/11 tries to appease newcomers, but it caters much more to hardcore racing fans;  if your thinking about a purchase, consider a rental first to make sure that the sim-like nature of the game is what you want.  Overall though, this a great game at a budget price, even though the game begs to continually be innovated upon. I know I am kind of stretching it with the “expanded universe” ideas, but it is true that this racing game could be a game that sets a new bar for other sports games, even in areas that most of us may not have thought about yet.  Yet, the fact remains that if you can forgive the graphical shortcomings, there is nothing wrong with the actual game.  Hopefully, they can continue to expand the game and make it as good as the car simulation games, because quite frankly, motorcylces are so much more awesome than cars, right?