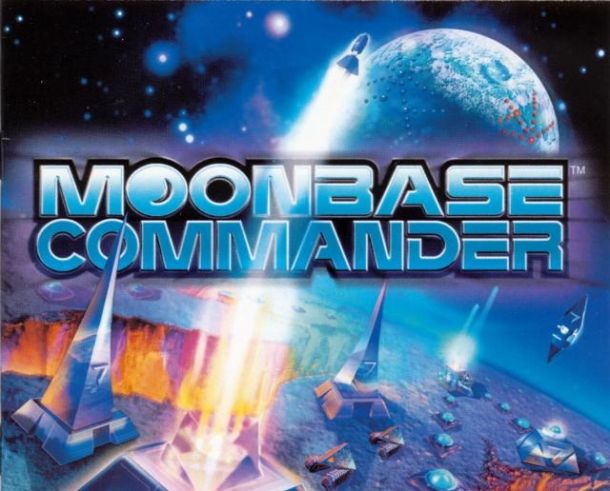 Moonbase Commander was released in 2002 to little fanfare. A PC strategy game with no flashy gimmicks to sell itself on, it received positive press coverage but failed to translate those good reviews into big sales numbers. It’s quiet fate put down to an almost complete lack of marketing, the Atari owned IP nonetheless ticked along with a small cult following.

In 2013 Moonbase Commander was picked up by Rebellion Interactive following Atari’s bankruptcy. From the beginning the priority for the Rebellion team was to get the game on Steam, bringing it to the platform twelve years after it was initially released.

When first booting up Moonbase Commander it is tempting to think “is this it?” Even for a 2002 game it still has a distinct air of the retro about it, and the game gives players little in the way of an introduction – there are the menu options, off you go.

After spending some time with the game it becomes obvious that this is actually a fault with the player, not the game, and that maybe Moonbase Commander just knows what it’s playing at. There is no tutorial so the ins and outs of the game must be learned from experience, a thing that very few games of any description these days actually allow. 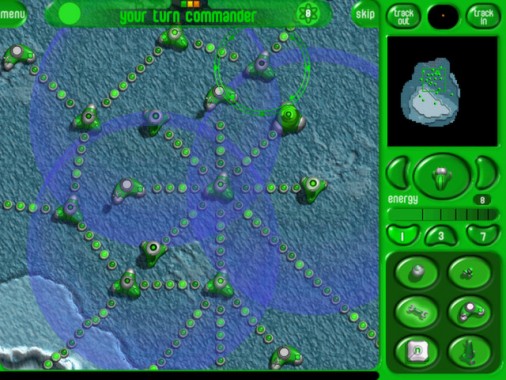 The basic premise is that the Earth has run out of juice, so as a Moonbase Commander for one of four differently skinned but otherwise identical factions, it is the player’s job to tap the energy reserves of various lumps of rock, all the while fending off the competition.

This is done by plonking down a hub, the epicentre of the game. Each hub has the ability to send out a variety of other structures, including shield generators and offensive towers. The catch is that each new structure is connected to the hub that spawned it by an energy chain, and these cannot overlap. If a hub is destroyed then everything that came from it will also go up in smoke, and if the first hub goes then it’s game over.

Each player has a set amount of energy to spend per round, but can choose to divide it up however they like. Build one new hub and place some mines for two turns, or send out a dozen rounds of less expensive cluster bombs. Energy can also be saved for the next turn, and the total available can be increased by tapping into energy pools.

There are only 18 units/structures available, but combining their use with the space limitation imposed by the energy chains makes for compelling strategy, made all the more fun by the fact that the game doesn’t just pop up and tell you how to combat new obstacles. What does a virus do? How are shields disrupted? What can get past anti-air? Figuring it all out is a pleasure, as is getting the feel for the aiming system, which requires not only direction input but a power/distance meter that will be familiar to fans of golf games. 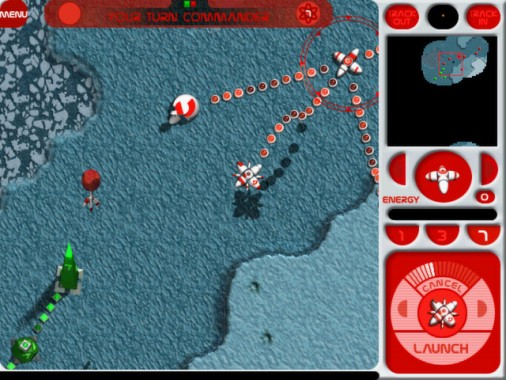 The enemy AI can play silly buggers on the odd occasion, but for the most part it pushes along the learning experience and gives what for. One particular mission saw the enemy faction retreating, victory in grasp. They weren’t retreating. They were looping round to my main hub and brought down my entire network in two shots. NOTE: maps wraparound! It was a stupid oversight on my part, but it was a fantastic demonstration of how devastating any lapse in judgement can be when it comes to home hub defence.

The campaign divides sixteen missions amongst the four factions, with each unlocked sequentially and given a medal rating on completion. Mission objectives range from basic “put that unit there” to full blown strategic encounters.

The mechanics of the game are a nigh on flawless exercise in elegant game design. The interface and mechanics are easy to understand, encounters can turn from white washes to retreats in an instant, and uncovering the different ways and means to exploit all the units on offer is extremely rewarding. Moonbase Commander is addictive too, and can neatly slot into twenty minute slot in your day that expands until hours are gone. 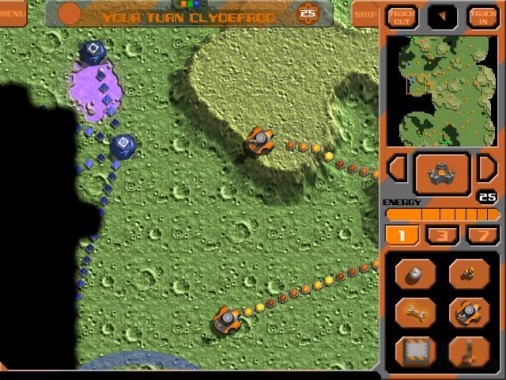 That said the simplicity of it all does mean that there is nothing for the gamer that gets off on customisation or delving into complex stat and battle systems. Once the campaign has been completed there is little but the skirmishes to dally with, and having multiplayer limited to LAN does make multiplayer less accessible.

There’s something about the stark neon colours and efficient interface of Moonbase Commander that makes it feel like it has always been around, just waiting to soak up your time. There’s little flashiness to the presentation – what needs to be seen is seen. Each of the factions has a different colour and different unit style, and the maps are also basic and sparse in their features. It seems to be from a time when gameplay was the main concern, not pixel count or lighting or draw distance.

The nameless female voice that constantly threatens the player with demotion or other punishment after particularly bad moves is another oddly timeless part of the game, with her “Your turn Commander” sure to lodge deep in any pixel obsessed brain. The music fits the sci-fi theme very well, and manages to last for the long haul without becoming annoying or noticeably repetitive. 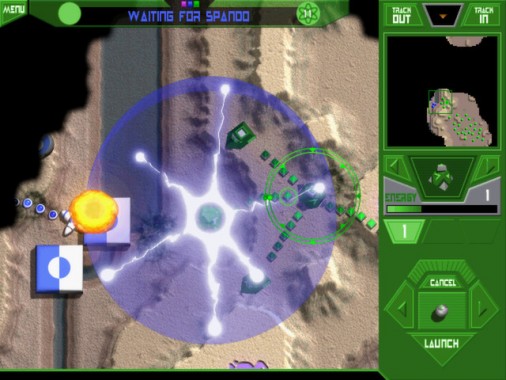 It’s an odd word to apply to a game, but Moonbase Commander is pure. There are no extra bells and whistles in the gameplay or the graphics or the presentation, just the essentials. And those essentials form an addictive strategic experience that has a place in any gamer’s collection. The rumored  mobile version would no doubt help Moonbase Commander to the success it deserves, but thanks must go to Rebellion for getting it this far already.