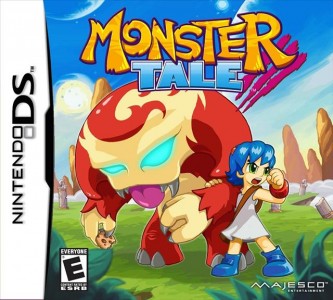 The Nintendo DS has seen plenty of fantastic titles over the past few years, but very few have actually been new IPs, or a new IP with promise that is. Dreamrift are looking to change that with the release of Monster Tale. Imagine a game with the gameplay of Metroid with a dash of Pokemon added in along with a brand new set of characters that are charming and quite memorable. That is exactly the experience players are in for with Monster Tale, and while it may not be perfect, it is still a tale worth exploring. Here is my review for Monster Tale for the Nintendo DS. 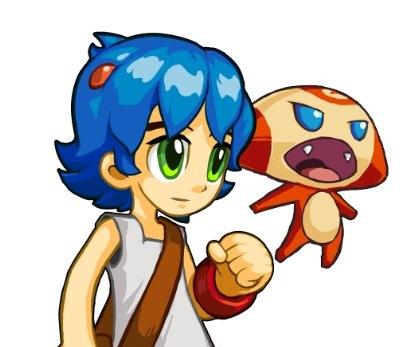 Story
Monster Tale starts out by placing you as the main protagonist Ellie, a young girl who has found herself in a magical world inhabited by various monsters. Shortly after a small bit of exploration, Ellie encounters an egg which hatches into a small orange monster that quickly takes a liking to the young hero, and receives the name “Chomp”.

The plot unfolds a bit more when Ellie learns that the Kid-Kings are taking over the monster world and using the inhabitants as tools for conquering the land. Kid-Kings are children much like Ellie, only they see the monsters as just a source of power while Ellie sees them more as friends. Now Ellie and her new monster pal Chomp must make their way through the land and take down the Kid-Kings one by one, restoring the kingdom back the way it once was.

The story is very light-hearted and easy to follow for the most part, as it is told with brief cutscene-like moments that appear during certain points of progression. You also learn more about your own monster, Chomp as this tale unravels and he starts to grow and evolve on the journey. 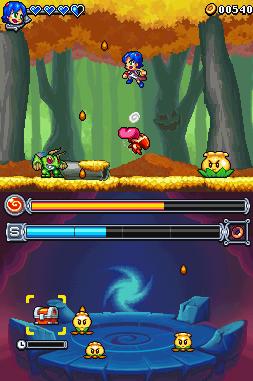 Gameplay
From first look at this title, even by looking on the back of the box, one may think Monster Tale is just a childish take on a platformer with a virtual pet on the bottom screen. That is where you would be mistaken though as Monster Tale actually is a retro-fans dream when it comes to the actual gameplay, with different elements mixed in reminiscent of titles such as Mega-Man, Metroid, Castlevania, Pokemon, and of course Henry Hatsworth, which was made by the same developer, Dreamrift. Monster Tale is a platformer/adventure for the most part, and is best described as a “Metroidvania” style game as the whole world is non-linear and just about every crevice can be explored as you progress through the game. Most of the time, you set out to travel to a particular place on your map, fight enemies along the way, and then recover a key or new ability that opens up the next section. It’s a simple formula and it works quite well throughout the whole process, though those who hate backtracking might grow tired of visiting the same environments over and over again.

Ellie is a pretty tough fighter and has a vast array of techniques that can be used to take down the many foes that block each path. For the most part, players will be using Ellie’s magical bracelet that fires projectiles as well as her purse which is used as a standard melee attack. As you progress, more techniques for these two methods of fighting can be learned by reaching various platforms which give Ellie new abilities and upgrades. These upgrades are not just cheap add-ins either, as each play a key role in progressing to the next point of your journey. Ellie is a bit slow compared to other platforming protagonists, but these upgrades make up for speed and work perfectly for the challenges at hand. Everything from jumping, shooting, and simply whacking an enemy all perform smoothly and effectively, as the controls are all well placed on the DS and never become an issue throughout the game. 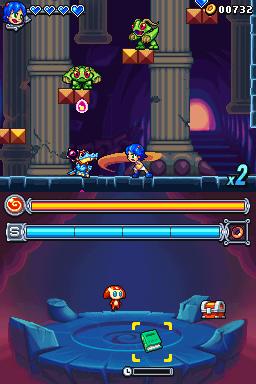 What separates Monster Tale from all of the other Metroidvania type titles though is Chomp. Chomp is by your side throughout the entire experience, battling other monsters as you go, but he also spends a bit of his time down on the bottom screen which is known as the Monster Sanctuary. This area is used as more of a training ground for Chomp so when Ellie collects items such as food, toys, or other weapons you can quickly send down Chomp at a tap of a button into this little station as he consumes or uses whatever collectible you may find. Each item consumed or used along with enemies defeated results in experience for Chomp and a gain in levels, much like the same system Pokemon has. Some moments will also require you to actually send Chomp back to this area to take care of any monsters who might have took up residence while the action was taking place up top.

As Chomp levels up, new forms can be unlocked which are element based and you can instantly switch to any form straight from the menu to best fit the elements of foes at hand (Elements consist of Grass, Water, and Fire, each having an advantage or disadvantage over the other). Chomp also learns new moves for just about each form which actually can be quite helpful in boss battles or tougher enemies down the line. Chomp is mainly ran by AI and is usually pretty smart on knowing which switch to hit or when to smack an enemy, but I did run into a couple of instances where he would just float next to Ellie in a daze while I took damage. Thankfully Chomp has two attacks that can be controlled with the shoulder buttons which corrects this issue completely and due to the variety that can be learned, customization later plays a much bigger role with Chomp. 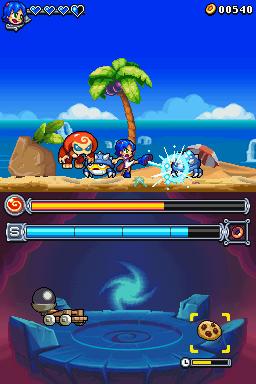 It took me about 6 hours to complete the game and it is a bit simple, but there is a ton of attacks to learn, traits to earn, and sights to see on this magical little journey that will surely keep players going back for more. With such a mix of genres, this game could have easily been a big mess, but thanks to the streamlined mechanics and open customization for the whole “pet simulation” aspect, everything feels well knit together, letting the game shine to its full potential early on.

Graphics/Audio
Monster Tale has an art style that is very vibrant and kiddish, but that isn’t a bad thing. The characters are all well detailed and seem to come straight from a story book and blend in perfectly with the active environments. Monsters in the game also have quirky appearances as well so everything stays light-hearted and fun while the deep gameplay takes off. Every area feels different from the next, and even though you spend most of your time backtracking, I never felt like the game was too repetitive as a new area is usually reached before you know it.

If I could describe the music in Monster Tale with one word though, it would have to be “magical”. I know that is a strong statement for any game, but this soundtrack truly took me back to the days of SNES platformers and even could stand up to some themes from much more advanced games of today. The music is just so atmospheric it makes everything feel relaxing and simply fun while you play and is definitely not to be muted if you truly want the full on experience from the game. There is even a little bit of voice acting thrown in as well which doesn’t do too much but it does give Ellie, Chomp, and the Kid-Kings a bit more of a distinct personality. 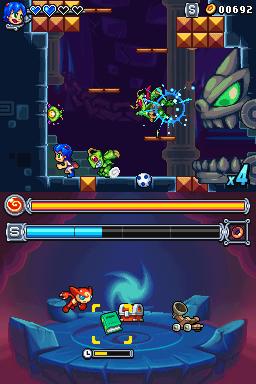 Overall
I think many gamers have had the same conversations I have had in the past, like “What if they mixed this game and that game to make a whole new title?”. That is what is great about Monster Tale though. It is ambitious and dares to go that distance while doing just about everything right in the process. In an age of remakes and reboots, it is great to see such an original and polished platformer make an appearance which makes me think Monster Tale has the makings to be a cult classic that ten years from now will be remembered as being one of the Nintendo DS’ last great games. Ellie and Chomp certainly fit the role of mascots and are full of future potential, so it goes without saying that a franchise is born with this gem.

I Give Monster Tale: