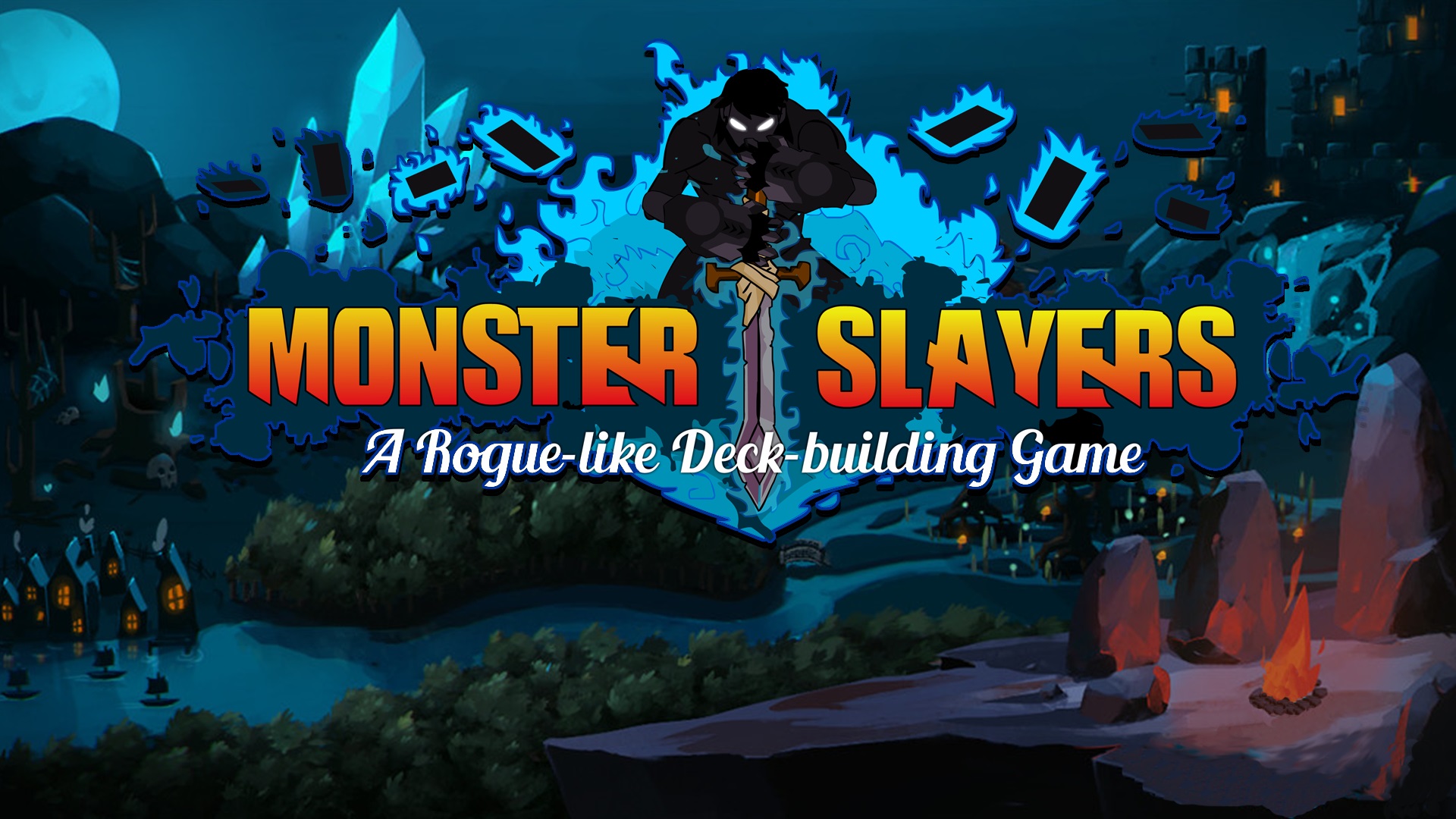 With so many different game genre out there many developers have been experimenting with smashing together a few to see if they can create an interesting title out of the mash-up. Many of these games tend to throw a “roguelike” element into the mix, where players will die permanently but some of their gear or experience will carry onto the next character, and with Monster Slayers we have an RPG combined with a deck-building system. Does this mash-up result in something worth trying out?

Players take on the role of a customizable hero that is seeking to make a name for themselves by slaying powerful creatures found in the Northern Valley with the true target, the Harbinger, being the final goal. Players will be able to select from a number of classes such as Ranger, Knight, Barbarian, Wizard, and even play as a Dragon if they feel like, before setting out on their journey to cement themselves as a legend. 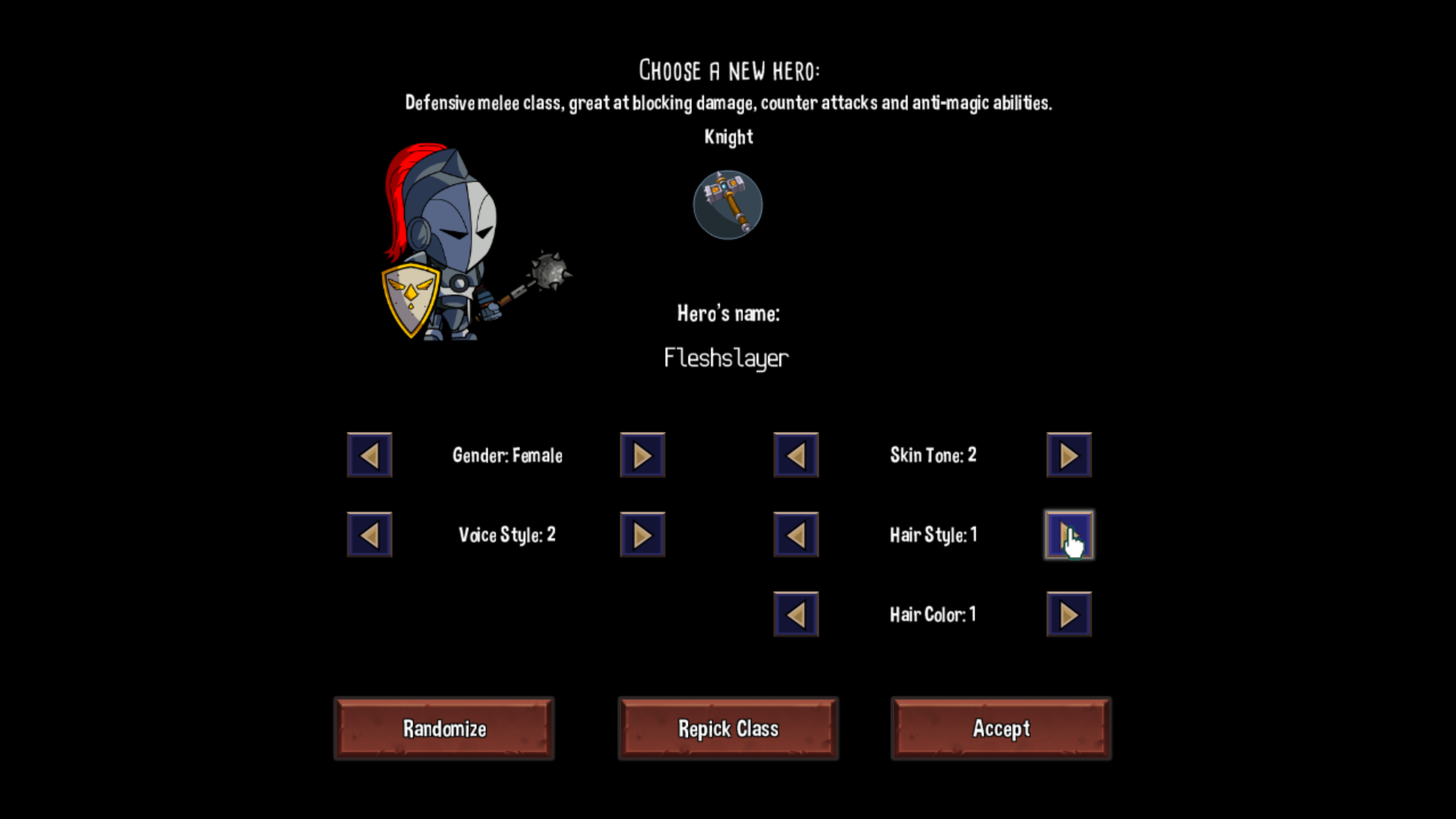 As the game even states, players shouldn’t worry too much about how their character looks unless they really find themselves fond of customizing hair styles and coloration options, as you will likely end up dead before you even get past the second dungeon. You see, with the way that Monster Slayers is set up, you will earn various bits of fame with the overarching Guild with this fame being able to unlock powerful boosts to various character classes, companions, and other new abilities that will make your time in the dungeons easier.

That is only the surface of the roguelike elements to this game however. You see, all equipment that you find or purchase as well as a small portion of your gold will be transferred to the newest hero looking to make a name for themselves, potentially making your journey just a bit easier as you make your way towards the end. It also helps that as you clear each dungeon, with the third being the one where you will face your greatest challenge, you will gain up to two companions that will aid you on your travels with special skills ranging from healing the character, providing armor, dealing damage to the enemy, and more tied to cooldown timers that tick down between battles. 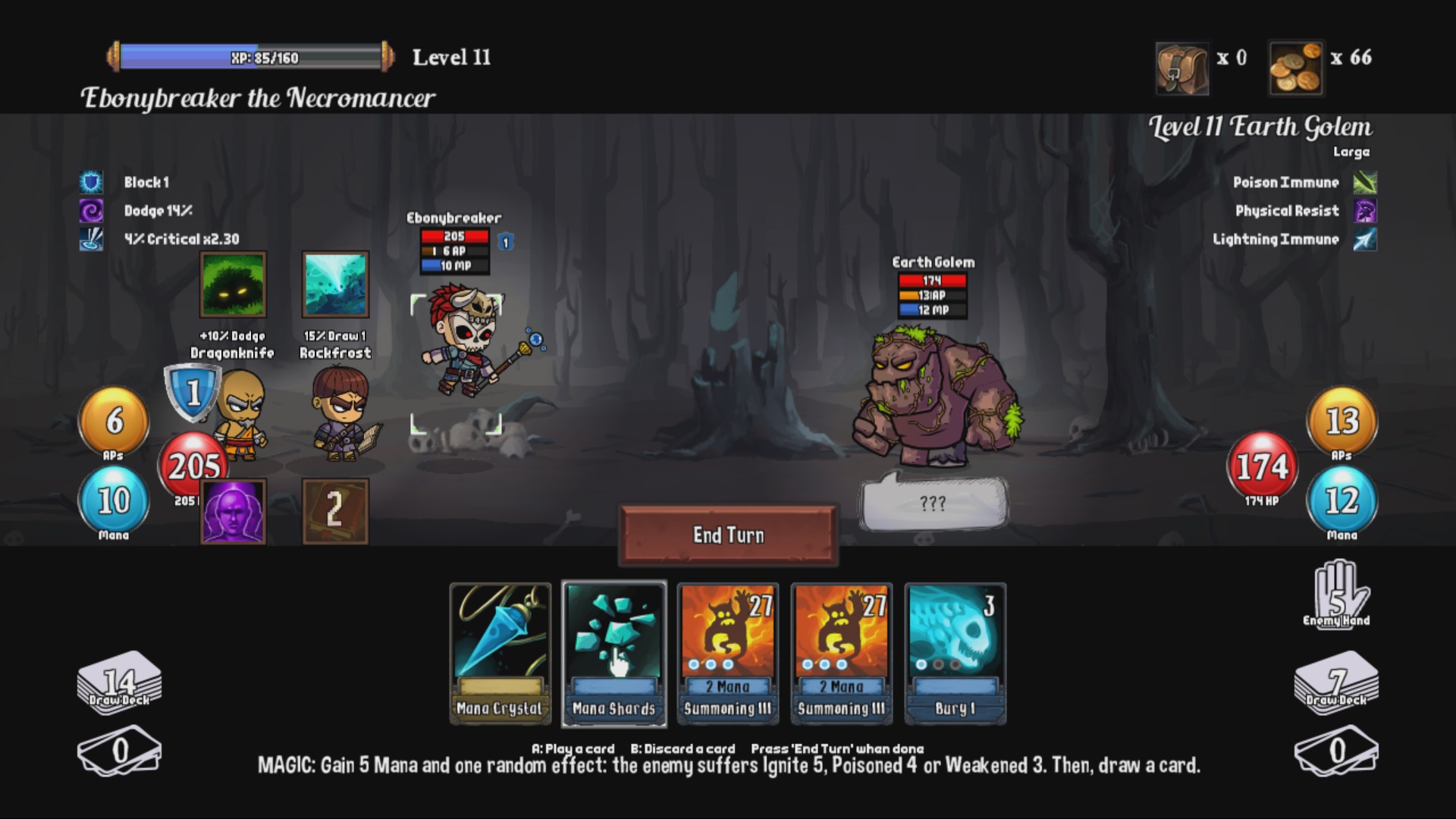 Outside of these carried over elements actually progressing a character is very straightforward. Various classes have special abilities and cards that are exclusive to them and while they all play a bit different, progression is still handled the same way. As you travel through a dungeon’s square by square setup, you will gain experience and level up when defeating monsters. Leveling up will reward players with more health and an option to gain a new card for your deck, upgrade a card in your deck, increase your total Action Points or Mana, and more with every five levels adding the ability to pull an extra card to your hand every turn.

Traveling through the dungeon grid will reveal what is in adjacent squares with merchants, campfires, and Guild Captains being boons that can help give your character new cards and abilities, and enemies will even have their levels shown before you fight them. This gives you a chance to potentially level up on weaker foes, or restoring your health to full with said level up, before taking on a stronger opponent. 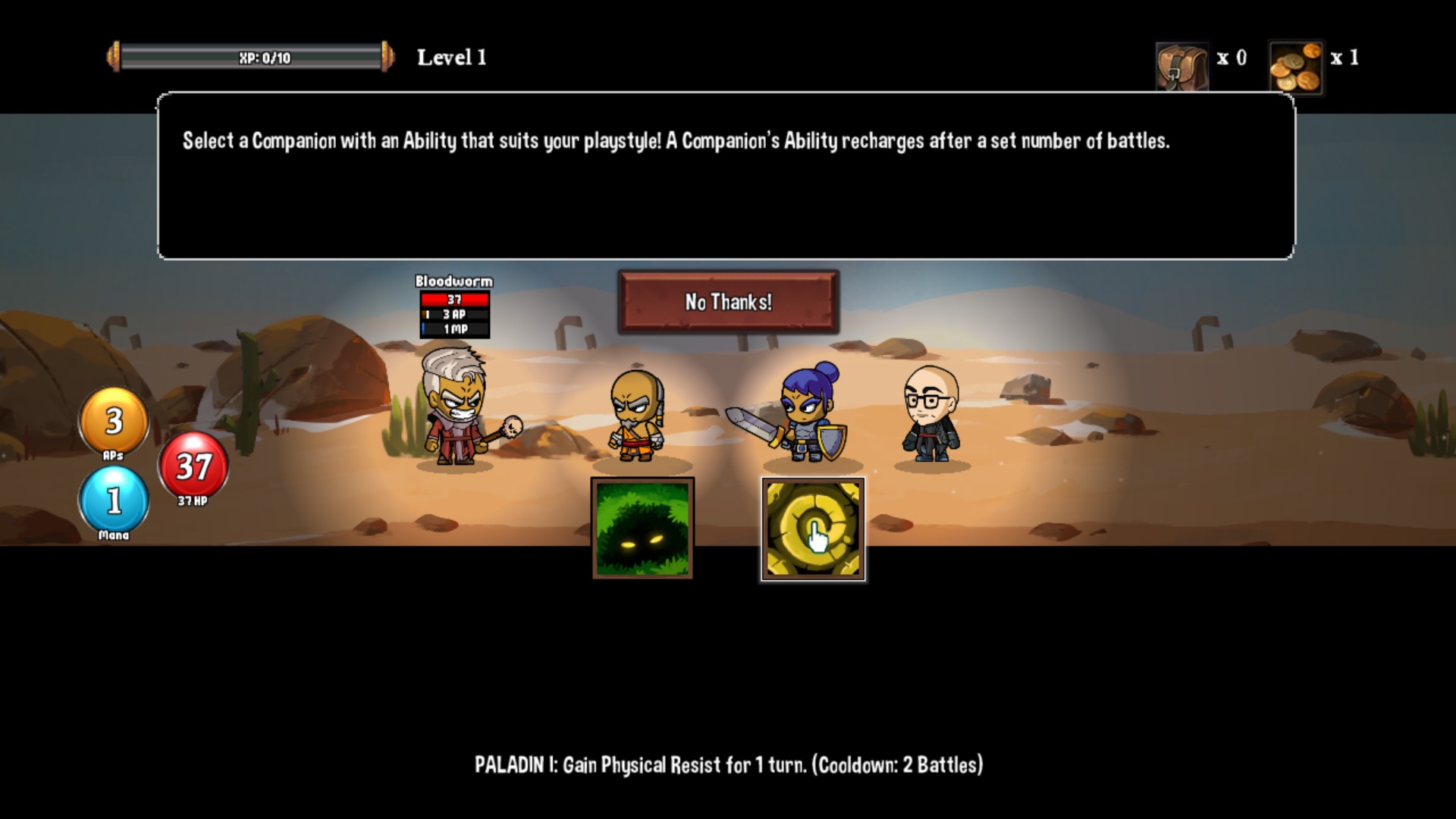 Once you actually enter combat the card based combat is simple to learn but can be incredibly tricky depending on the foes you are facing and the cards that your current class has available. Almost every card will require the use of either Action Points or Mana with most classes having the ability to regenerate points per turn or gain mana with the use of cards. It is possible to delete cards from your inventory occasionally as well as level up cards as mentioned earlier and this allows players to create a far more focused deck that is more likely to pull stronger cards than pull a garbage hand. Unfortunately this does mean that there is a lot of trial and error as well as luck when it comes to facing off against enemies in combat.

More than once a foe that should have been a pushover has managed to critically damage a hero thanks to special traits that they can pull off thanks to their monster specific cards and even being prepared can leave you with a fresh death on your hands. This also isn’t helped by the fact that the user interface can be troublesome at times. Using all of the cards in your hand can sometimes lead to the game automatically moving to your companion and if you aren’t careful, using their special skill when it wasn’t needed. This can lead to trouble in upcoming battles as these skills take a number of battles to recover and will leave you feeling a bit robbed.

For the most part Monster Slayers is a simple looking game with players controlling chibi looking characters as they venture through a dungeon and face off against a number of monsters. Unfortunately the actual variety in these monsters can leave a bit to be desired which hurts the replayability of a roguelike such as this since you will be playing through areas repeatedly and facing off against the same foes multiple times. Combat animations are also rather bland outside of a few special abilities so don’t expect to be too impressed in this regard. 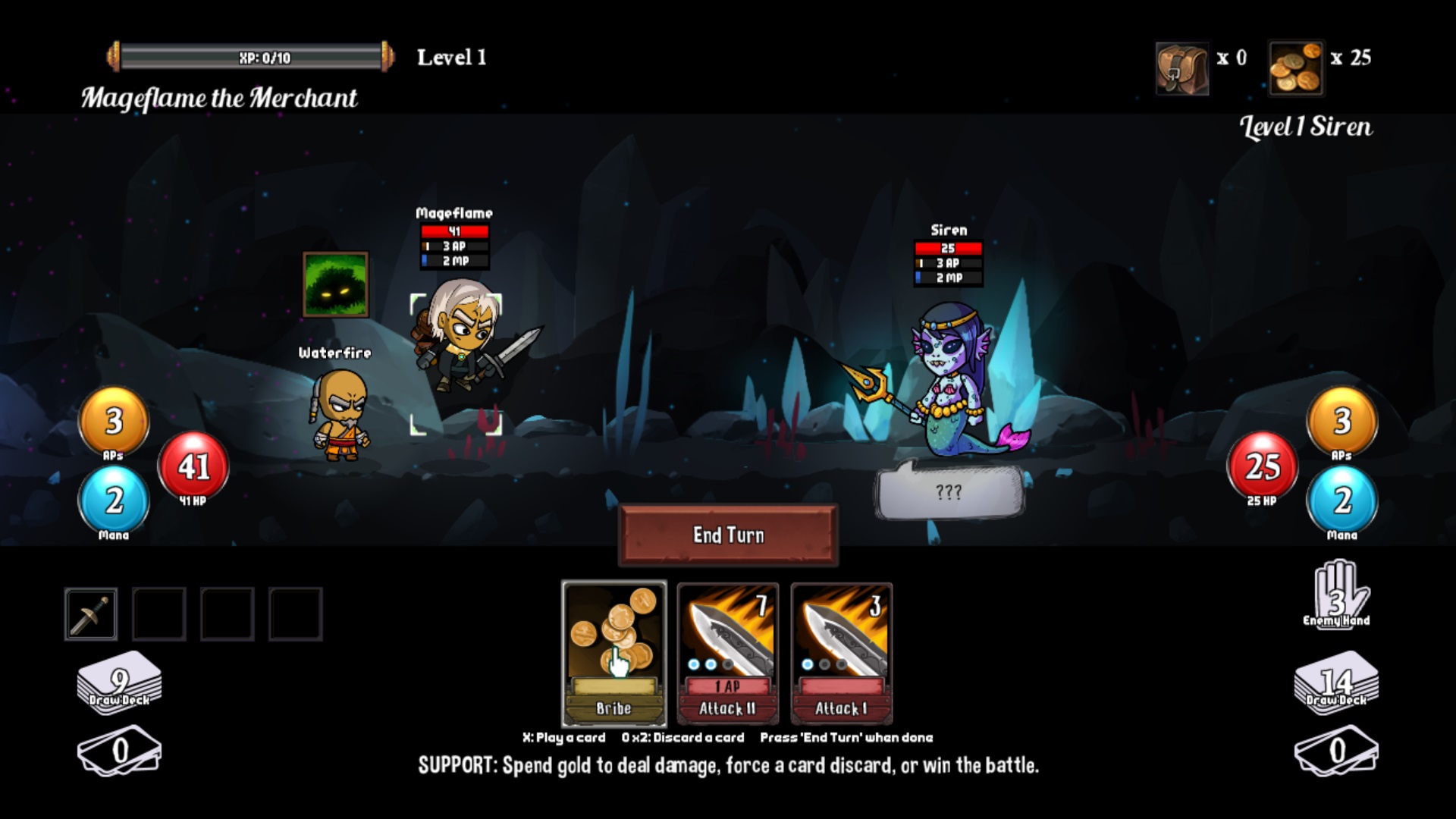 The game features very little in the form of dialogue other than being able to give your player character a number of different male and female voice options that will play canned phrases while traveling through a dungeon. The one real standout happens to be the voice of the narrator that plays through combat.

Monster Slayers is a decent deck-building RPG that is likely meant to be played in short bursts. Players can easily sink time trying to get a little better each run but don’t expect your fights to last very long as most journeys can be completed in a little under a half hour, even if you manage to make it to the end. The repetition of monsters and feeling that some battles simply rely on luck can be bothersome but those looking for an easy to learn and not too hard to master deck building game, Monster Slayers should be right up your alley.

While not overly impressive to look at, Monster Slayers is a quick to learn deck building RPG that makes for a fun time as you learn the ropes and hope that luck is on your side.
7