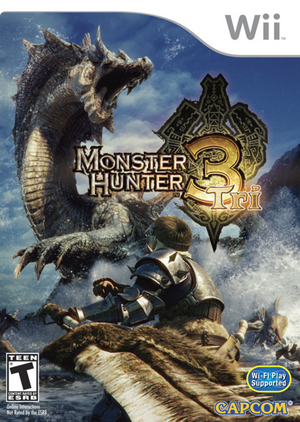 The MONSTERS have been unleashed upon the world !!

Monster Hunter TRI has made its way to the Nintendo Wii for the first time.  Jumping on the back of a giant sea turtle our brave adventurer’s have left their Playstation 2 and PSP’s behind in search of bigger, mightier Monsters and treasure on the Nintendo Wii.  Finally the rest of the world can experience the fun of slaying a Monster, harvesting and creating a new weapon from its scales and embarking on great adventures with fellow hunters.

Monster Hunter is not a game to taken lightly.  In Japan Monster Hunting is performed on the PSP and enjoyed nearly everywhere, at home, with friends or on the train trip home, nearly everywhere you go you’ll see some sort of Monster Hunter reference.  Toys and knick knacks are scattered in nearly every gaming store. Did you know that they even have Monster Hunter toilet paper !! It’s 3ply and super soft and will keep you safe even while you’re playing on the toilet.

Monster Hunter TRI is a deep and enthralling role-playing adventure.  It will honestly keep you entertained for days and weeks as once start you won’t want to put it down.  As you always do with many other role playing games, you start off as a young monster hunter with not much to your name.  Entering the city, not all is peaceful, earthquakes and disaster has plagued the land, the villagers believe that some sort of monster is cause of all of this and you are given the task to find and put an end to it all. 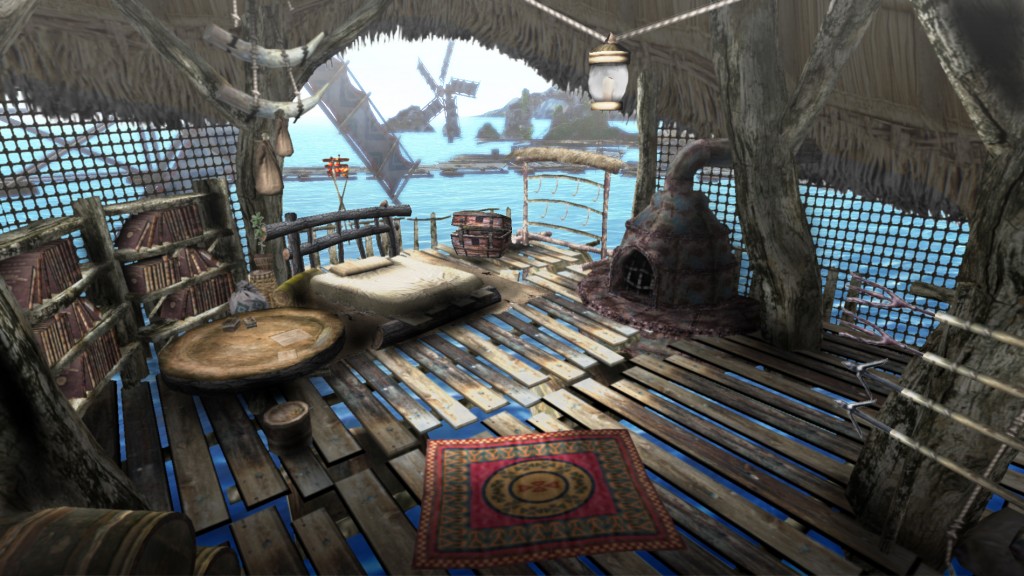 Initially your first few missions have you learning how to play and take down smaller less troublesome monsters.  To start with the game menu is full of important information for hunters, and it is recommended that you make sure you know how to use it to get what you need and when you need it. Monster Hunter TRI has a solid customization system, you can select your hunter’s sex, along with what they look like, plus equip them with accessories and most importantly your Monster Hunter weapon of mass destruction.

There are a total of 7 available weapons to choose here they are with a brief description :

Sword & Shield : Continuous attacks and a shield offsets the Sword’s lower attack power (one of the advantages of the sword is flexibility, you can use items while you have it equipped)

Great Sword : This blade, giant in both size and force, waits silently for its opportunity (the charged slash is the trademark of the Great Sword and has different levels of force based on charge time)

Lance : With the advantage of an impenetrable shield, strike your foe down with your long, deadly fang from afar (unlike most other weapons, the Lance isn’t good for speedy evasive moves)

Switch Axe : New technology has brought forth a miraculous new weapon of phantasmagoric might. (This weapons switches between a mighty AXE and a Sword)

Long Sword : With beauty in its strength, the spirited blade slices through steel like paper.

Bowgun : Random fire, sniping, explosions.  The design does the talking in this long-ranged gun that knows no bounds. 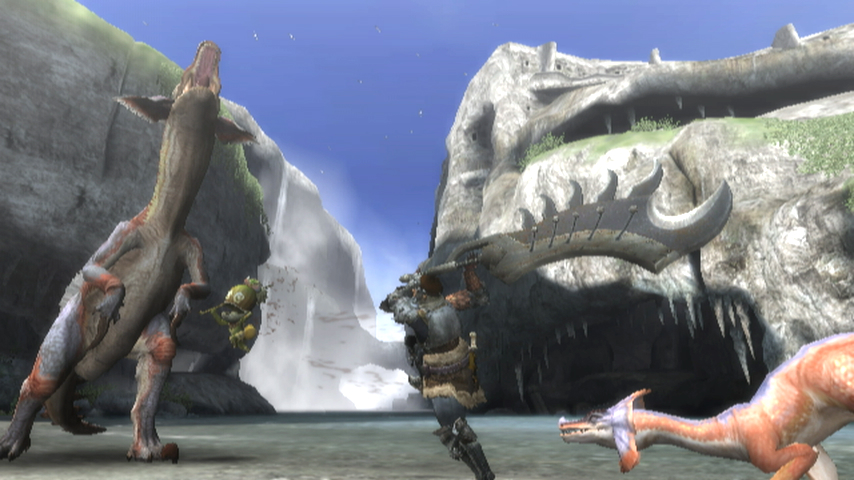 With weapon in hand you will embark on missions and quests, hunting specific monsters and leveling up and getting paid along the way.  Most of the quests players will be given will consist of the following 3 types.

Hunting Quests :  These quests allow you to either slay or capture a monster.

Slaying Quests :  The purpose of this quest is to injure a monster till it falls.

Capture Quests : These quests the hunters need to capture the monster while its still alive.  If you kill it then you fail your mission.

If you do fail a mission, you lose any used items, but get to keep items you’ve collected during the quest.  If you fall unconscious three times you also fail a quest.

Hunting alone in the single player campaign is brilliant, the tutorial system guides you through every step of the way and teaches you all you need to know.  There is so much fun to be had hunting monsters on land and even underwater.  Not all monsters live on land, there will be times where you’ll have to fill up your lungs with air and dive into the depths to find new hunting battlegrounds.  Just make sure you check your oxygen gauge and quickly go up for air before it’s too late.  One great thing about battling underwater is the control system and movement is exactly the same but you can also move up and down too.  Make sure you also check for items underwater as well as you’re bound to meet many kinds of fish while you’re swimming around. 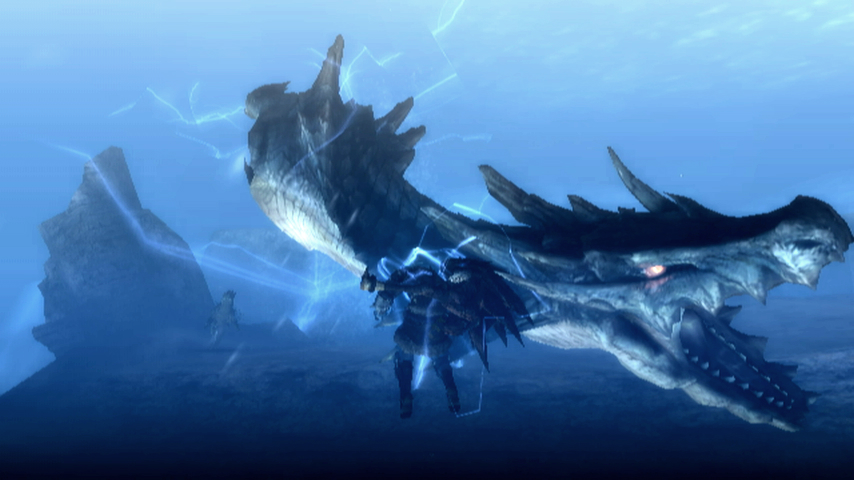 Now playing on your own is ok, but if you have your Wii connected to the internet, then you have to try Monster Hunter online.  Up to four players can join a party through the Nintendo Wi-Fi Connection.  This is where the fun really starts, your party of four hunters can hunt monster, tactically work together to take them down and complete side-quests and collect items that you can’t get while playing in single player.  Monster Hunter is also compatible with Wii Speak (microphone) so you can organize and strategize your next moves without having to type.  Now we’re talking !! 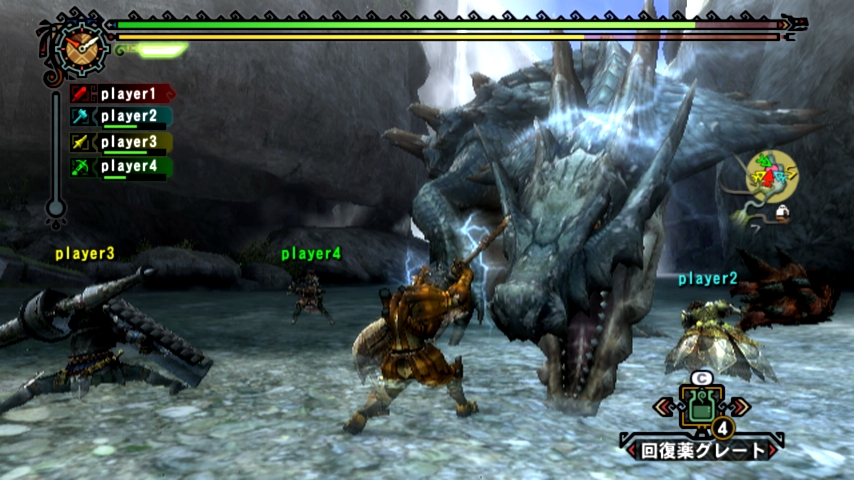 Monster Hunter TRI has placed a huge emphasis on its living and breathing ecosystem where humans co-exist with majestic monsters that roam both dry land and brand new sub-aqua environments, this is certainly a first for the series and is quite impressive, especially when taking on those underwater monsters. 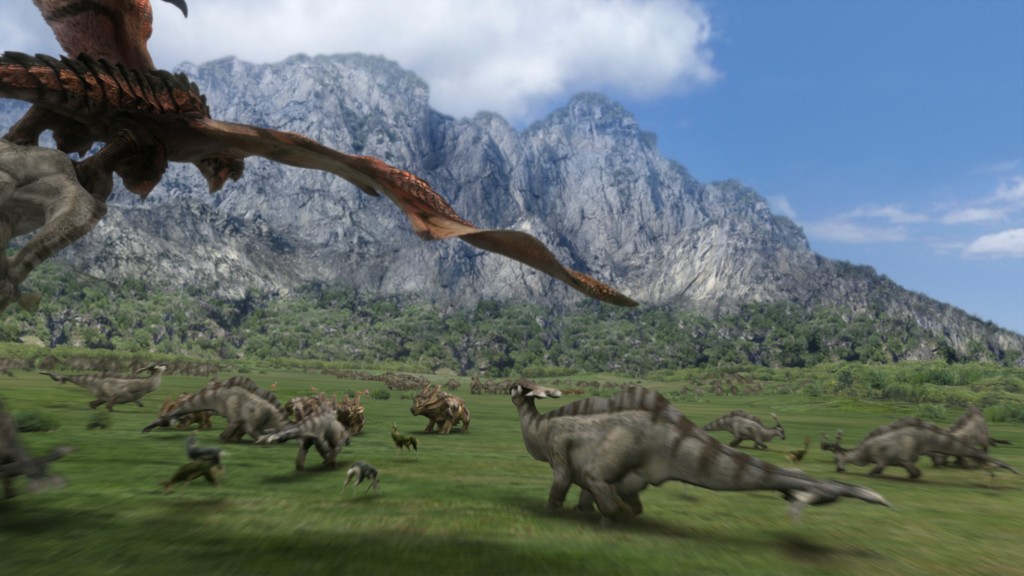 Visually  the game isn’t going to blow you away but it does look good on the Wii and is a big improvement over the Playstation 2 and of course PSP versions.  With the hardware limitations on the Wii in terms of graphical power, I think Capcom have tried their best in making it look as good as possible.  Also it would have been good to see a few more monsters on the screen to battle at the same time as more monsters = more mayhem and more fun especially with four players online.

The Monster Hunter Tri music was fantastic and possibly one of the best I’ve ever heard in the series.

Monster Hunter Tri is Capcom’s best release thus far in the series.  Graphically it’s not the greatest, there are a few little online sync glitches, but everything such as game play, online action with friends and epic monster battles does tip the scales towards making it a must have game on the Nintendo Wii.