Over the past few years, Capcom’s Monster Hunter franchise became a phenomenon all over the world for it’s easily accessible “grind and battle” gameplay which lets players tackle huge beasts while exploring a stunning setting. With all of the success across many different platforms, Capcom decided to take the series to the iPhone in a much lighter format with Monster Hunter Dynamic Hunting. While this title is rather ambitious considering the platform, it still falls a bit short compared to it’s console brethren. What was included in this on-the-go entry? Here is my review for Monster Hunter Dynamic Hunting for the iPhone. 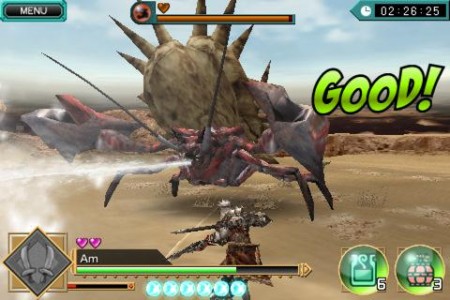 Gameplay
If you have ever played any Monster Hunter game before, you should be instantly familiar with the formula used in Monster Hunter Dynamic Hunting, except a few things are missing from the overall experience. Instead of exploring to find a monster, this title consists of “quests” that all present one monster to defeat at a time. I did feel a bit disappointed by the lack of exploration at first, but in just a short time the true strategy and depth that made the series famous started to show it’s head, and the game started to shine rather quickly.

The controls in Dynamic hunting are simple to use, but it requires a bit of practice to master the many techniques that are offered throughout the game. Much like Infinity Blade, this title uses the “tap to hit” mechanic, where you simply drag your thumb along the screen to move your character and tap at a target to unleash a quick hit when in range. A set number of slash attacks are also given to the player at the start of each match-up that require you to slide your finger across the target to execute a slightly more damaging hit. Applying two fingers on the screen at once throws up your guard and dragging those digits will have you executing a dodge roll. These controls work well enough for the most part, but at times I had a bit of trouble with the responsiveness of the touch-screen, resulting in a few extra swipes to properly land a slash. It can be a bit frustrating, but thankfully these problems don’t show up too often and this scheme complimented the combat style well enough to keep the battles fun and exciting. 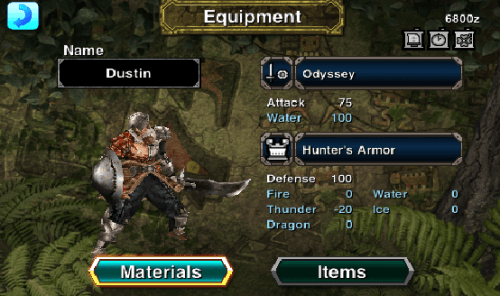 It wouldn’t be a Monster Hunter title without the varied amount of equipment and upgrades and Dynamic Hunting is no different in this area. Once a foe is defeated, players are rewarded with a bit of currency and some new materials that can be used to create new weapons and armor. There are three different weapon types in the game (Sword, Sword and Shield, and Dual Sword), each possessing a distinct feel compared to the next and added in ailments that can play into the weaknesses of certain foes. The true strategy of the game is found in upgrading, as if a monster is too tough, the player must grind through some re-battles and collect the proper materials to enhance their arsenal. There are over 40 weapon types in all, so players should have no trouble finding their own personal weapon of choice to do battle with. 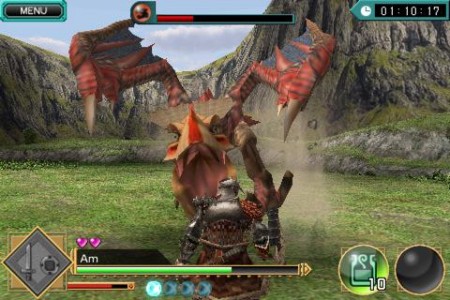 The biggest flaw in the game can be found in how long the overall experience takes to complete. Boasting only 12 monsters, it only took myself around an hour to finish all 12 quests with only two weapon upgrades. To make matters worse, a few monsters are just reused models that only differed by techniques and color, so there wasn’t a whole lot of variety within. That is the main problem with Monster Hunter Dynamic Hunting though, as the short length and shortcuts made in development don’t let you fully utilize all the different strategies and upgrades found within. Now there is a harder mode to be unlocked and a bit of incentive to go back and perfect a score, but those extras just are not enough to make this title feel like a complete game overall.

Graphics/Audio
Monster Hunter Dynamic Hunting doesn’t really push the bar in the form of visuals, but I can say that the designs used for the monsters certainly made the battles both exciting and memorable. Each beast looks intimidating as the models used are well detailed and feature some top-notch animation to capture their grimacing nature. Backdrops are also well crafted, as the varied settings compliment the art style used for the character models well and give a spacious feel to each stage. It is a shame you can’t actually explore these vivid environments, but they do provide a bit of eye candy to stare at while in battle. 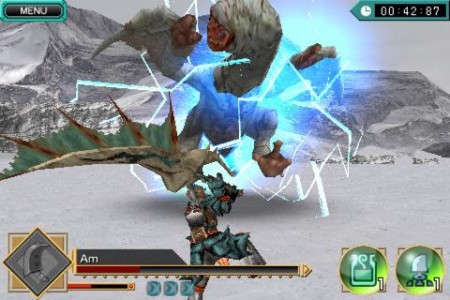 The soundtrack for the game is a bit generic and just plays lightly into the background to give a bit of a theme to each area. While it is fitting, the music really isn’t important in this game though as the player is to focus on the monsters they are doing battle with first and foremost. Luckily, each foe was given screeching and roaring sound effects that help portray that intimidation found in their designs.

Overall
Monster Hunter Dynamic Hunting utilizes a lot of the same features that made the Monster Hunter franchise a staple in gaming, but with a more dumbed-down result. The controls work well most of the time and the combat is actually enjoyable, but the lack of monsters to actually do battle with hurt the final product. The content is there, the depth is there, and the high presentation value is also included but rewashed models and lack of true exploration just make this game feel incomplete on it’s own and a tad forgettable overall. Monster Hunter fans however should have no regrets paying the $4.99 entry fee to get that combat they love on the go, but others out there are better off just picking up one of the many other formats from the series to get a more fulfilling experience.

I Give Monster Hunter Dynamic Hunting: