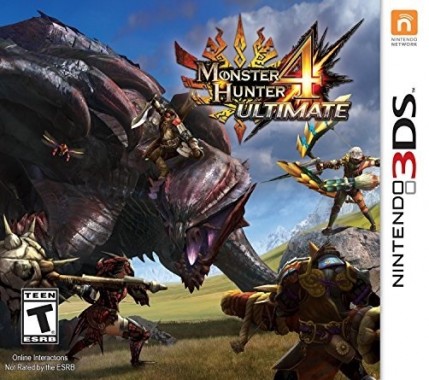 Overview
While Capcom may have lost a bit of value in terms of franchises during the past few years, Monster Hunter continues to thrive well in Japan, and is finally becoming a mainstay overseas to boot. With the transition from Sony portables to Nintendo, we have already experienced a total of three solid recreations of the third entry, but now its time for this namesake to truly prove itself with the latest beast offered in the form of Monster Hunter 4 Ultimate. Utilizing all of the features for the handheld, this title looks to feed fans more of what they love with some new features, monsters and more. Does it live up to expectations, or are the hunters now as weak as the prey? Let’s find out.

Story
I know, if you follow the Monster Hunter franchise whatsoever, you’re probably wondering what kind of story a game could possibly provide that never really tried to put forth a strong narrative to start with. Players start out as a newly recruited hunter who has joined up with a caravanning group. As you travel, the story starts to go from your standard Monster Hunter fare to dealing with a mysterious virus, which is infected several species and turning them not only mad, but highly powerful. There are a decent number of cutscenes, and each keep paced very well to intertwine with the main plotline. 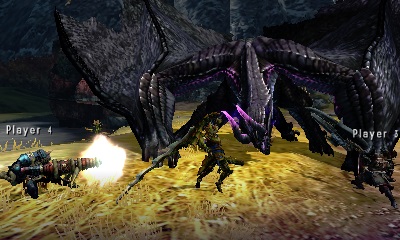 Its actually very entertaining to see the world of Monster Hunter expanded on in this new way. Sure, having a rich story doesn’t change the game, but it does enhance a product that would have still been satisfying without it. Monster Hunter 3, at least for myself – had a very steep climb before everything clicked. If anything, the tale within Monster Hunter 4 Ultimate acts as a few steps to capture the player’s attention from the start, pulling them into a world that is full of exploration and charm, and that is before you even take a full stop into that heavily addicting gameplay. Think of it as a rich and rewarding tutorial.

Gameplay
If you came straight out of Monster Hunter 3 and hopped right into 4 Ultimate, you will definitely see the large amount of attention Capcom have put in to the next installment here. The player starts out with a decent amount of customization options for their hero, where they can change their facial features, hair, color of skin – and so on. Directly after, you are then able to customize your Palico sidekick. Yes, we now are able to have an assistant of sorts for our journey, and that is in the form of a newly branded Felyne comrade who sticks by your side for all of your quests. Palicos are able to be fully customized as well, where the player can gain armor and level up their cats through successful quest runs. When I first started playing and got used to my Palico, I’ll be the first to admit it felt like an odd gimmick. After downing a few missions, I was rather glad to have Krumm by my side, as Palicos come with decent AI and are quick to join in the battle and even pick up items in hidden areas while you explore each region. 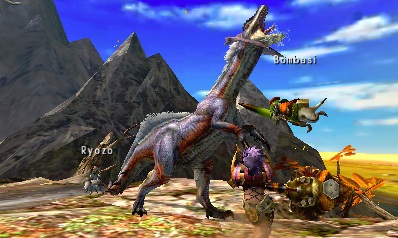 The gameplay also makes a big jump by making a big jump. Players now can leap off cliffs and high points, landing safely down below as they either avoid or try to find a monster they may be making chase with. You can also hoist yourself on the back of a monster and get an upper advantage, where you then have to put your weapon to work while trying to hold on for dear life. Keep in mind that only large monsters are able to be rode in this fashion, but the addition of this feature makes these already big battles into something on a more epic scale. Another new addition comes in the form of how you explore. Players can now jump up walls and move in multiple directions, where they’re able to attack or shuffle a platform quickly, alleviating a lot of the slow treks of the past. Gone are the underwater battles from past titles, but in my opinion – its a fair trade as while those spots definitely brought something different, Monster Hunter 4 Ultimate brings more than enough to the table in terms of accessibility and depth to compensate. 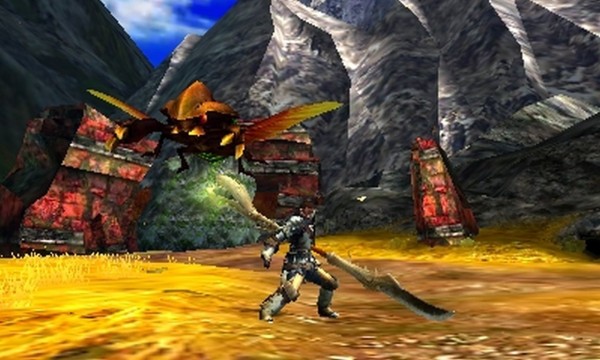 Without a doubt, equipment and upgrades are the heart and soul of what sets Monster Hunter apart from every other action-RPG on the market. Monster Hunter 4 may be more accessible, but it does not slack in its deliverance as players are still able to obtain armor and weaponry by combining, crafting, and questing. There are two new stand-out weapons within the game, with the first being the odd – yet fitting Insect Glaive. This staff allows players to vault into the air at a moment’s notice, and controls a bit like the long sword. It can also can summon a Kinsect, a bug that latches on to various parts of the monster and returns to the hunter with a gift of boosted stats and power. The Charge Blade is a new weapon as well, and should be thought of as the hallmark blade for a hunter to obtain. After the player deals so much damage, this axe/longsword combo will begin to glow, where the player can unleash a devastating attack. Both of these new weapons feature their own combos to bring a new energy to the hunt, and if players still would like to stick with the standard sets of dual blades, bows, and so on – they’re completely free to do so as nearly all of the past arsenal has been retained for this new installment. 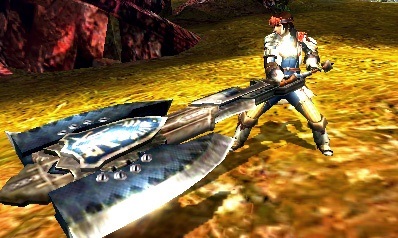 As the player progresses through the game, a good amount of locations – or base camps become unlocked, allowing you to see new NPCs and face new challenges in an abundance of quests. These quests range from hunts where you must take out a specific number of monsters within a set time limit, gathering quests, and facing the one big enemy that every locale inhabits. You can’t level up, but you can continue to run through quests to get more materials that can be crafted into better weaponry. Its a smart system that runs fluidly, and has not lost any of its polish or luster with 4 despite the large amount of new mechanics. Those who do not like grinding will quickly learn that this is still a game where you must improve to move on, which means taking on quests and repeats in order to gain more materials. Again, if you have played Monster Hunter before, you will come into the game ready for the grind and the grind is indeed a great and addictive experience once you get past a bit of a learning curve.

I haven’t touched on controls much in this review as there really isn’t a lot of difference between this title and Monster Hunter 3 Ultimate. Players can customize their bottom screen so they can adjust their camera in that format, or simply use the D-Pad for what is in my opinion a much quicker fix. The “New” Nintendo 3DS adds a much more comfortable stick for that option alone (this game was reviewed on a normal 3DS XL), which frees up space for better utilization of the touchscreen itself. Back to the field itself, there are a hefty amount of new monsters this time with more variation, letting players get more from beasts of old and new. I know, this should be expected, but there was a great deal of repetition in just about every other older entry in the franchise, so seeing more of a mix was definitely pleasant. 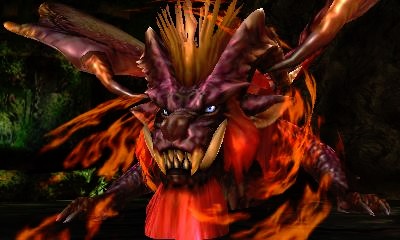 For the first time ever, players can now hunt online via the Nintendo Network, joining a party with up to three others in a massive number of quests. The guild and village quests can last you hundreds of hours as it is, but with a few friends, you can hop on these servers that are rather sturdy at the moment and scout some dubious foes. Since each single player map features randomly-generated worlds of sorts for the solo experience, players can also swap missions to get new armor and quests with Guild Cards, and do the same with the Streetpass function. There is a lot to the online experience with this title and as of writing this, it looks to only expand with plans for a great deal of DLC and future downloads in general as online has never been more prominent in any other Monster Hunter title.

Visuals
One of the finest features of Monster Hunter 4 Ultimate comes in the form of Capcom’s ability to put so much scope onto any location just through camera angles and a beautifully painted world. Backgrounds are simply stunning and feature a ton of detail, and the nearby terrain and fauna pops, whether you are utilizing the 3D or not. The character models look sharp as well, with simple armor or even color changes doing a lot to change one’s perspective of their own hunter. The monsters are what matter however, and with smooth animation through and through, the only thing one can do is focus on the personalities that have been animated into every single model on the field. Its easy to tell a gentle giant from a vicious beast, and the movements and general AI provide a lot of spunk to tie into an absolutely incredible atmosphere, where every hunt is a brand new adventure. 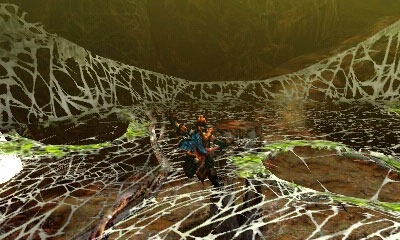 Audio
The soundtrack for 4 Ultimate is fantastic and definitely works well to bring the visuals full circle. The worlds are big, the monsters can be epic in size, but the sound effects and melodies create a greater illusion, allowing what could be just a standard encounter to be something truly special. This is definitely a game I would love to have a physcial CD for in terms of musical value alone, but one little feature actually does more harm than good. I love the idea of having a Felyne follow me about, and Palicos are a great idea, but nothing sucks the energy out of a room faster than hearing a constant “meow!”. I get it and it works from time to time, but the Palicos grate just a bit too much, and made me search for a way to turn off their constant whining. That said, I wouldn’t have minded their chipper cheers if the music wasn’t so important for tension of the battles, but alas, players might want to learn how to drown out their cat pals after a few hours of hearing the same little screech.

Overall
Monster Hunter 4 Ultimate is a leap forward for the franchise, in more ways than one. With incredibly deep gameplay, fantastic new features, and mechanics that make the game more accessible than ever before – this may be Capcom’s greatest portable release this generation. There are a couple of minor hiccups from time to time, but those are very easy to forgive in a game that never stops rewarding the player for their patience with massive payoffs. You don’t need to fix what isn’t broken, and Monster Hunter 4 Ultimate is the same wild ride with the windows rolled all the way down, allowing an audience to enjoy new sights and experiences in an unforgettable adventure. 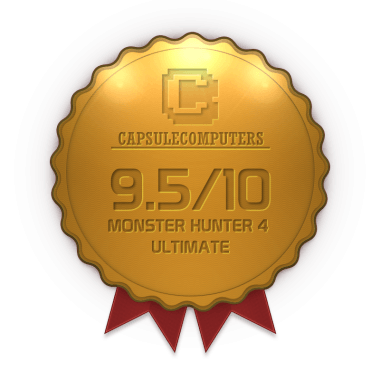