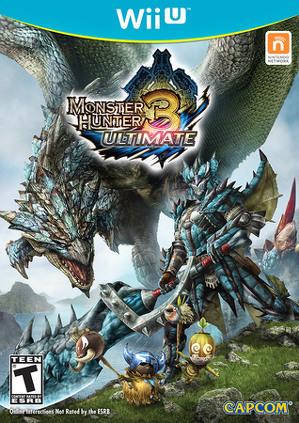 Overview
The Wii U has had a fairly decent start, but has suffered from an onslaught of ports since release. Mass Effect 3, The Amazing Spider-Man, Need for Speed: Most Wanted..heck, even Ben 10: Omniverse was a port. I think you see where I am coming from. What is good is that those blue cases are filling shelves, and we are finally starting to get news of brand new IPs for the console. Better news? Well, these ports are starting to step up their game entirely, and no title has proven itself to be “more” than Monster Hunter 3 Ultimate for the Wii U. Sure, its a port (Wii) of a port (3DS), but one done right in many ways with a brand new coat of HD paint and plenty of new features. Does this version warrant a purchase from Wii U owners hungry for a new game? Let’s see the results.

Editor’s Note: We already reviewed Monster Hunter 3 Ultimate for the 3DS in heavy detail. This version is the same product aside from console specific features that the review down below will tackle. Check out that review HERE, and read on to find out more about the Wii U version.

Gameplay
If you have forgotten or are new to the Monster Hunter franchise, I will yet again give you a brief recap of just what is in store for all players as they head into this large, living and breathing world for the first time. Monster Hunter has always been about quests, and with this expansion of sorts – that is still the theme. Players take the role of a young hunter for hire and will quickly begin to receive quests from residents of one of the many areas, which usually include activities such as fishing, collecting, capturing, and of course slaying monsters. There is a lot to this formula, most of which was broken down in our 3DS review of the game, but thankfully, the Wii U version is able to pull all of this off effortlessly. 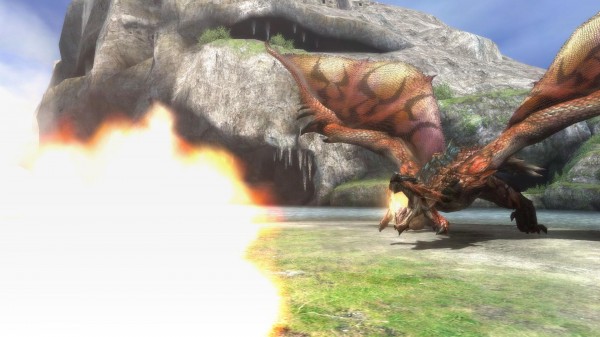 You probably didn’t come here to hear about how well every aspect of the game blends together – with its perfected mechanics of upgrading rather than leveling and themes of exploration, as the Wii U version is indeed a beast in it’s own right. The Gamepad is part of the experience that indeed makes things so accessible for new players, as while it is your controller, it also plays as your menus, inventory, and map screen. Yes, this all fits quite well, and just like the 3DS version, you are able to transfer icons and customize the Gamepad to include the features that you, yourself want at your fingertips. Convenience at its finest. 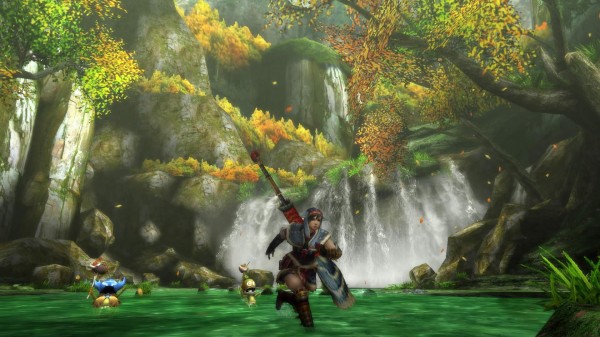 Also like the 3DS version, Capcom have implemented several control schemes to satisfy every type of Monster Hunter out there. The best option comes with the Wii U Pro Controller. Yeah, we haven’t seen too much use out of the wiresless controller, but every button comes well mapped, allowing for the solid combat to remain fluent and simple. Cameras can also be better controlled with the extra analog stick, letting the player whip the view behind them at any given time, ensuring that if you do die, it probably will be at your own fault. Another plus of using the Wii U Pro Controller is the battery life. Let me first say I do love the Gamepad’s use in Ultimate, and was pleased with how well it handled – but let’s face the facts. There is no other game on the Wii U at this moment that will take more of your time than Monster Hunter 3 Ultimate, meaning that unless you want to be running to your dock after a long play session, this controller just makes more sense. 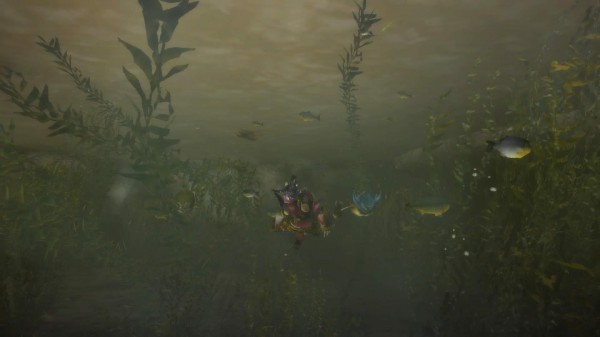 Getting back on the Gamepad for a moment, if I had anything to criticize, it’s that Capcom seemed to copy and paste nearly the entire game straight from the 3DS version aside from a few small details when it comes to the Gamepad’s screen. This isn’t a bad thing, as that worked well enough and the customization seems more relevant on the Wii U, but those who are playing both are surely going to take notice at the features that seem out of place like the touch screen D-Pad – which gives a further camera control option and seemed unnecessary due to the extra analog already being on the Gamepad controller. Those battles however feel more epic on the big screen, and the ultimate reason to have both versions of the game under your belt comes in the form of multiplayer.

Since the Wii U released, there haven’t been a ton of online games. Sure, Black Ops II and Assassin’s Creed III work better than their cousins on the Xbox 360 and Playstation 3 in my opinion (an opinion based on the community rather than the actual gameplay), but Monster Hunter is one of those games where the online and multiplayer experience in general may raise a few extra questions. Well, to squash those fears, I must say that Capcom have shown us yet again that they know how to implement a clever and well balanced multiplayer for this franchise, and just like the Wii’s Monster Hunter Tri, Ultimate comes with more than enough option to keep you busy outside of single player combat. 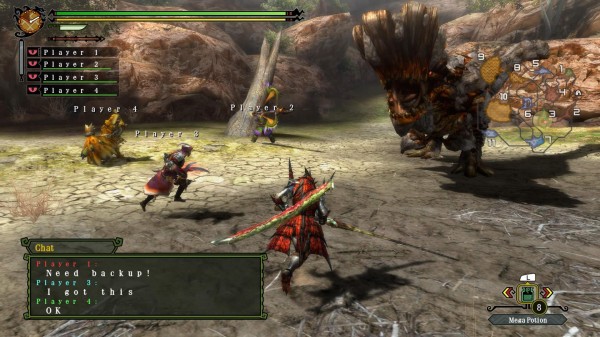 The first thing I want to speak about is lobbies. Up to 100 people can be in a lobby at one time, where users can use the keyboard to chat among the crowd as they prepare to gather friends and allies for battle. Every one of the eight locations from the main game has 10 different lobbies to play in, and the host can customize their own game and name their room to their liking to ensure preferences are met accordingly. I know having an on-screen keyboard may not sound like a game changer for online, but Monster Hunter 3 Ultimate breaks new ground with the feature as chat has never came easier on a console. Making matters even sweeter is that voice chat comes straight from the Gamepad, meaning you don’t have to have a headset to speak to your squad. The only real issue I had with the online mode here is that if the host is being a jerk or just happens to bail for any reason, the game ends abruptly. Maybe we will see this patched, but for now – those pondering of hitting the packed servers need to ensure everyone is in it for the long haul before starting a game. 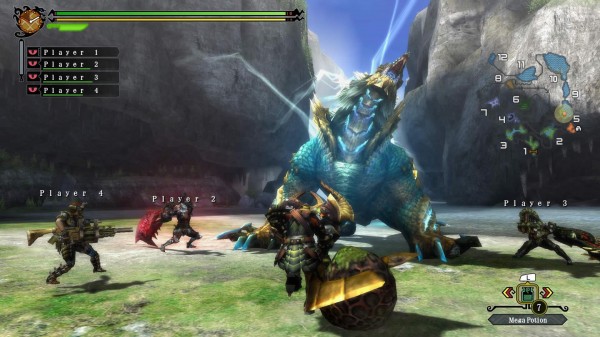 The 3DS also plays a decent role in Monster Hunter 3 Ultimate‘s offerings. Remember when we used to play Pokemon with friends, and then go to Pokemon Stadium to bring our team to the big screen? Well, the local play is sort of like that. Up to three 3DS owners can join in on multiplayer quests with the user that holds the Gamepad, and since this is the same game, all players see everything in unison on their device. For both online and 3DS local, I did not suffer from any lag or hiccups during my many hours with the games, which is an indication of how solid this title syncs up. Also, soon – but not yet, a patch will be coming to allow for saves to be transferred between the two games, meaning you can take the same save file on the go after saving and transferring to the 3DS. It sounds like an awesome feature, but its quality remains to be seen until Capcom post the update.

Visuals and Audio
When I played Monster Hunter 3 Ultimate on the 3DS (which is the first version I played through), I was blown away by the stunning environments, models, and scale of the game. Now, being on a big screen, the shock effect has worn off due to the fact that we expected to see great things anyway considering the Wii U’s power, but the beauty of this game remains in tact, allowing for every monster encounter to still pack a punch of intimidation and excitement. I did however have a bit of a problem with the text size during dialogue sequences of NPCs. The menu text, HP bars, and general HUD information displays fine, but the dialogue itself is very small and located in the very bottom left-hand corner of the screen. I have an HDTV that is decently sized, but I still felt as if I needed to move closer to be able to see every bit of text from a conversation. Menus from the Gamepad that do show up on screen can suffer from a size shrinkage as well, appearing somewhat cluttered compared to the 3DS version.

The Wii U version takes the soundtrack that was already powerful and an absolute masterpiece and enhances it in every way. Sound effects blend with the music to give the player an intense and realistic atmosphere to hunt in, and those who choose to play the game with the volume down are certainly going to cut their own excitement from encounters down dramatically. That said – while online, many users have their volume cranked up to enjoy this. Is that a problem? Well, not really, but it can get a bit frustrating have to hear the same music and roars of foes while trying to speak to someone. That isn’t the game’s fault, but it is a reason to think about investing in a headset – even with the convenience of the Gamepad’s mic coming into play.

Overall
Monster Hunter 3 Ultimate is a port, and honestly feels as if it were ripped straight from the 3DS version with upgraded HD visuals and online features added in. Due to the way the multiplayer here works however, I don’t think I would want it any other way. No title thus far has done more to show how the Wii U can handle an online experience like Monster Hunter 3 Ultimate, and those wanting to capitalize on their own experience need to honestly consider picking up both versions as they fit together just like those old Pokemon games did with Stadium back on the Nintendo 64. Sure, it might not bring a lot on it’s own and has some minor flaws that come with it, but Wii U owners looking for the “Ultimate” version of the franchise can look no further, as there is no better way to hunt than with this upgraded console version of a modern classic.