If you have played any board game, there is a good chance you have played the grandaddy of them all, Monopoly. Over the years we have seen a ton of different incarnations from the Parker Bros. Classic, and this trend is continuing even further with the release of Monopoly Here & Now: The World Edition on the iPad. While this version has seen a release in the past on the iPhone and iPod Touch, EA have now remastered the game in full HD with a few new features in tow along with a slick new menu system and design for the touch platform. So is this dice rolling, property buying reincarnation worth the cash or does it fail to live up the the rich history of it’s famed predecessors? Here is my review for Monopoly Here & Now: The World Edition on the iPad. 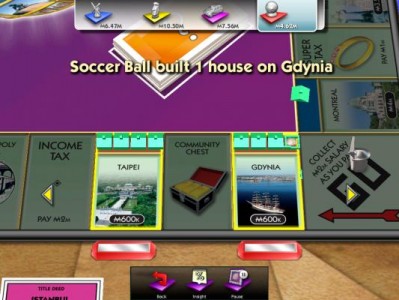 Gameplay
I don’t think I need to go into deep detail on how to play Monopoly Here & Now: The World Edition, as if you have ever played any version of the game, the core formula has remained in tact. The main objective is to buy up as many properties as possible in order to dominate the board and drive opponents bankrupt by collecting rent. Monopoly Here & Now: The World Edition changes up the standard currency system a bit though and has players start with 15M in cash funds due to the inflation of prices that the worldly properties possess. Instead of classic properties such as Boardwalk and Marvin Gardens, Here & Now offers up some of the most prominent cities in the world such as Montreal, Sydney, and Jerusalem (just to name a couple), with each featuring landmarks pictured on their particular space on the board. Even though everything still functions the same, these locations truly set the game apart from the standard experience.

In a single player game, the player can assign up to four AI opponents to go up against with four different difficulty settings. Personally, I found Hard to be the only difficulty even worth playing though, as even on Medium you will find the computer opponent constantly offering bizarre trades that make the game a bit to simple to win. For example, the much prized Montreal (which has replaced Boardwalk) was purchased by the AI in my first game. The very next turn had the computer trying to trade it off to me for one of the cheapest properties on the board along with a very small sum of cash. This happened quite a bit and I had all of my opponents going bankrupt before I could even get hotels on my properties in nearly every occasion. Bidding Wars for properties also caused a headache, as the AI would literally mortgage every property they owned just to win a random location. That is the biggest flaw within The World Edition, as there is not much challenge for those who go in alone. Thankfully, human players can be added which makes the experience rival that of the board game and is honestly where everything begins to take off.

Controlling the actual game is rather simple and executed perfectly for the iPad. To roll the dice, the player simply holds, shakes, and rolls with a simple flick of a finger. When it comes to bidding or dealing with cash, a simple tap is all that is needed with the very useful in-game calculator. Pieces move automatically after each roll, which is displayed by the player’s fully animated game piece. For those who are picky on picking that particular game piece to play as, a plentiful and appropriately themed selection of pieces are available which are all fully animated and consist of a Sumo, a soccer ball, nesting dolls, and several other worldly representations of different cultures. I never once had any trouble with the touch screen responsiveness, as the gameplay is literally so simple a child could easily join in and catch on almost instantly. 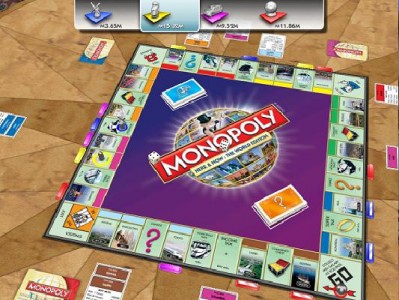 For those who have never played the game before, a “Teacher Mode” is also available. I tried this mode just to see what was inside, expecting a dumbed-down tutorial, and I was quite surprised by how much work went into this mode. Teacher mode not only teaches players how to actually buy and purchase properties, but also teaches strategies for success. For example, for each property you land on, a small description pops up explaining the role that color-set can have on gaining a victory. I really didn’t feel like I needed training as it is just Monopoly, but this tool could certainly be used to groom even Novice players into Monopoly masters in a short time span.

For those who are up for more of a classic experience, Table Top mode allows for a group to play while the screen rotates based on turn face the current player with a top-down camera angle. This allows for the whole board to be on the screen at once, simulating the perspective of….well..a table top. Not too much is changed aside from the screen rotation and camera angle, but it was nice to not have to constantly pass around or turn the iPad while playing.

Another feature worthy of note is that you can now customize the House Rules to your liking. This allows for the customization of bonuses rewarded for passing GO!, a Cash Reward for Free Parking, and a bevy of other rules to be changed to let players change up the formula and and play the classic in a whole new way. For those who are going in solo, this can perk up the challenge a bit and even though it doesn’t give the AI player a brain, it can stack the odds against the player to make the outcome a bit more exciting in the long run. Multiplayer also can offer a bit more replay value as players can either play locally or over Wi-fi against other owners of the game. Monopoly Here & Now: The World Edition will even downgrade itself to allow play against the iPhone/iTouch owners, which is another small but welcome option.

As I am writing this, I have played around 15 full games in total and sadly, 10 of those have resulted in a crash. I can say this only happened once per game of those ten times and the autosave brings everything right back up to speed in less than a minute, but it was a rather frustrating occurrence that could certainly use a patch. If I were playing on Wi-Fi during any of those games, I am certain I would reflect a bit more negatively, but there isn’t much of a community to be found at the moment for that mode.

Graphics/Audio
The visuals are the most impressive part of Monopoly Here & Now: The World Edition. Everything is in beautiful HD and truly makes the board look fantastic. 5 different settings can also be chosen, which set the board up at locations such as a backyard patio, a cabin, and a living room. The game is also surprisingly animation heavy, with game pieces coming to life to move to a spot and a jail cell rising up to lock a player up. These touches go a long way to make this version of Monopoly more of a visual feast and while the actual game might have a few flaws, nothing bad can be said about the spectacular presentation value. 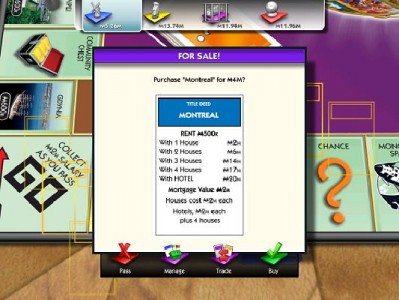 Music for the game consists of a relaxing, upbeat soundtrack that flows perfectly into the background and keeps the actual game the forefront of the experience. Sound effects however play a much larger role and assist further into bringing out some much needed personality to the game pieces and event spaces with all the bells and whistles a Monopoly fan could ask for. Those who prefer not to hear the standard soundtrack also have the option of turning on their iTunes library as the game is played, which is an excellent option considering the platform.

Overall
Monopoly Here & Now: The World Edition is a fine variation of the classic game of Monopoly, but sadly it possesses a few flaws that hold it back from reaching it’s true potential. The presentation value is fantastic and the menus and controls compliment the iPad well, but the poor and downright stupid AI can make this version feel like it was intended for multiplayer only. Hopefully the crashing issue will also be addressed in the future as having the whole game simply turn off while playing is a bit of an annoyance that leaves one to wonder how this bug was not caught before the game released. All of that aside though, I can easily say that Monopoly Here & Now: The World Edition is still a blast to play ad worthy of a purchase for those wanting to relive the classic in a whole new way.

I Give Monopoly Here & Now: The World Edition for the iPad: