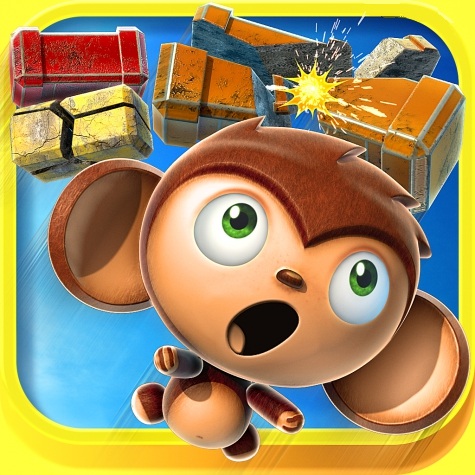 Chillingo release Monkey Slam is another entrant in the often revisited Breakout inspired brick-breaking genre. However, with Monkey Slam, developer Mad Atom has attempted to create a brick-breaking game unlike any other; unique in style and substance.

To play into the overall theme of the game, the usual ball found in brick-breaking games is replaced by a monkey. This monkey sits on the head of a giant ape, which acts as your paddle. Tapping where you want the monkey to hit sends it off in that direction, bouncing off of bricks, walls, obstacles and, among other things, bouncy rubber ducks. Once the monkey is in flight, there are two options to controlling the ape, which can be switched back and forth in the options menu. These are: by dragging your finger across the bottom of the screen or by tilting your iOS device in the desired direction. By default, the game uses the drag method, which is a much more accurate style of play.

There is a patch of green leaves on the ape’s head that indicate the acceptable point of contact between the ape and monkey. If the monkey lands anywhere at the bottom of the screen but there, it will fall and count as a life lost, of which you will have three at the start of every level. Sometimes when the monkey is falling right at the edge of the screen it can be difficult to position the ape appropriately as you must drag your finger to the very corners of your screen whilst also dealing with a slight lag in responsiveness at times – a small frustration. Besides using the monkey as your main instrument of destruction, you also accumulate bananas over time which can be flung in the same manner. Think of them as extra ammo. These bananas are not entirely necessary though, and feel like a cheap way to include in-app purchases as they are available to buy in the main menu. I stockpiled about 100 myself and rarely ever used one, unless it was by accident. 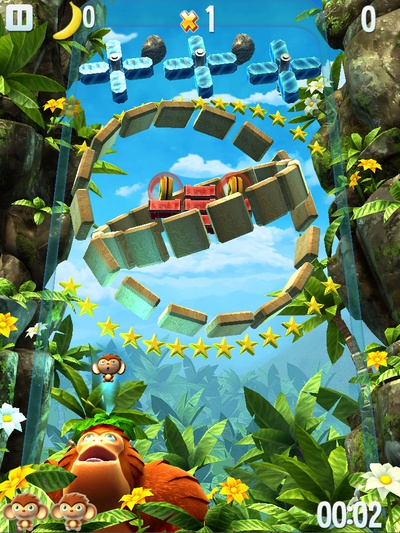 With the clear and simple of objective of smashing every breakable item on screen, you also have the secondary objective of getting 3 stars out of 3 for each of the 64 levels – 16 in each world, and surely more to come with updates. This star rating is reflective of your overall score at the end of a level. Your score will depend on bonuses, fruits, stars and drops collected and your multiplier. The bonuses are achieved both mid-game and at level’s end. If, for instance, the monkey stays in play for an extended period of time without having touched the ape, you will get a bonus called “Put Ya Feet Up” adding an additional 10,000 points to your score. And, at the end of each level, you will be rewarded a “Monkey Bonus” which grants you 10,000 points per life remaining and a “Time Bonus” dependant on how quickly you finished the level.

Your multiplier increases as you consecutively collect dropped fruit, whilst rotating stars are also found throughout certain levels that will add an extra 1,000 points each to your score. In order to make things easier for the player and provide a handicap in hairy situations, there are many power-ups that can be caught as well. Some of these power-ups are “Locomotive” and “Magnetize” which enable the monkey to blast through bricks without bouncing off them and automatically leads the monkey back to the ape’s position, respectively. There are many other power-ups, but beware for there are also power-downs. These include, amongst a few more, “Dizzy Ape”, which will cause the ape to uncontrollably wobble side to side, and “Slow-Mo” which, you guessed it, slows the ape’s reaction speed down considerably. Continuing this balance is the fact that there are gems among the bricks that provide 25,000 points, but also obstacles such as rocks and anvils that, if they land on the ape, cause you to lose a life. In later levels, these obstacles do create a greater challenge for the player, but a welcome one at that. 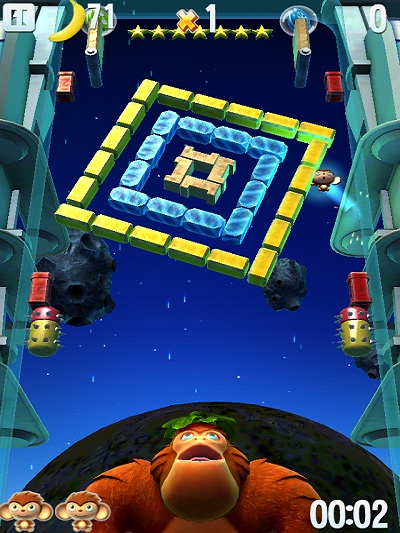 And finally, the actual patterns and layout of the bricks level to level are all unique and, when taking all other gameplay elements into consideration, require different strategies and attack plans. Add to this certain levels that have bricks or barriers moving in and out from foreground to background, and you’ve got the additional element of timing to consider. These are the highlights of the game as this is something that I personally have not experienced in other brick-breaking games and feels like a very fresh concept for the genre that should be adapted for future entries.

All titles under the Chillingo banner have a distinctly colourful, cute and cartoonish style of visuals and Monkey Slam is no different. In what will certainly appeal much more to a younger audience, Monkey Slam takes full advantage of the colour wheel. The four different “worlds”, each with their own theme, allow for some varying backdrops and colour palettes. ‘Monkey Reef’, with its Caribbean theme, goes heavy on the blues with its clear skies and sparkling waters. The ‘Far East’ takes from its namesake with traditional Chinese architecture painted in Earthy tones. And ‘Jungle Island’ depicts lush greenery whilst ‘Space World’ uses deeper blues with the greys of asteroids meandering about in the background. 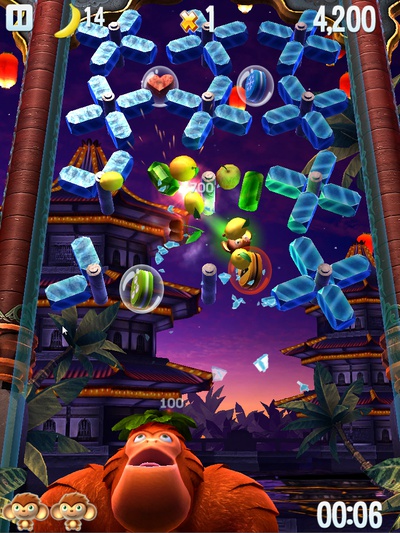 Even the powerups, visual effects, constructs and the fruits that fall out of them run the gamut of every colour in the rainbow. Even so there’s still always a sense of harmony in the visuals, with every other world providing an opposing colour scheme to keep a contrast between them that in turn keeps players’ eyes stimulated. Another aspect of the visuals that should be praised is the sense of 3D space, depth and movement in the backdrops themselves. They are never static; clouds pass from one edge of the screen to the other, asteroids float about, trees sway in the breeze and Chinese lanterns rise up and out of sight. These moving elements breathe life and energy into each surrounding and also provide that extra visual flair and continuity to each world.

The music found in both the menus and in-game is always up-beat and light. Although the same track is used for every level, each world is represented through specific audio cues, such as radio transmission samples in Space World and waves crashing with seagull’s squawking in Monkey Reef. The monkey appropriately makes…monkey noises as it hits anything on screen and chomps can be heard as the ape catches fruit in his mouth and eats it. All in all, the audio fits in very well with the visuals and overall sensibility of the game. 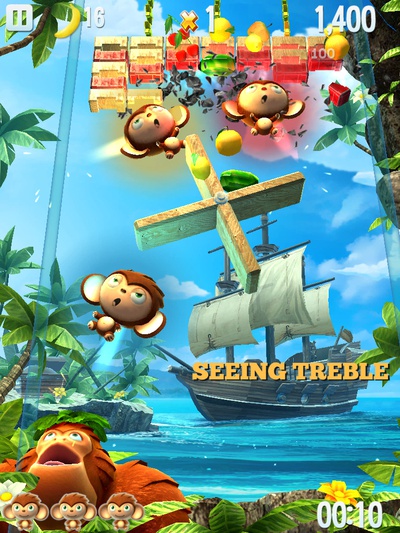 Monkey Slam is the most unique brick-breaking game out, introducing new gameplay twists and providing a great balance of mechanics and features. It suffers from very minor issues of responsiveness lag and unintentional banana usage (that sounds so weird), but they are really insubstantial enough to not affect the value of the title. And considering the game is only $0.99, I can’t see any reason to complain about an addictive game that could last many, many hours for those 3-Star hunters out there.