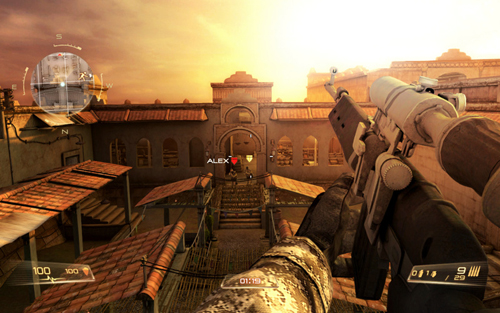 I’ve been a Mac user for a great many years now, and as such I had all but given up on playing games on my machine. But within the last year or so not only have we received Steam for Mac but now we have the juggernaut of the App Store right on our very desktops. Having any old App Store isn’t a big deal but with the gold rush of iOS development, game developers now have a pavlovian response of seeing money symbols when they hear the word App Store associated with Apple. In this mad rush for position, Gameloft has done quite well for themselves. With the new Mac App Store, Gameloft has delivered Modern Combat: Domination, an online multi-player FPS in the vein of Counter-Strike or the Call of Duty series. With such a mad dash for something to be recognised, does it hold up? 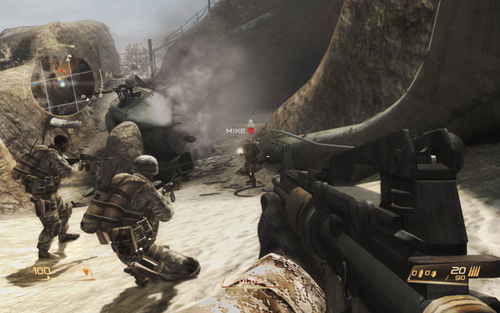 If you’ve played a FPS in the last 10 years you know what to expect control wise from MCD so I’m not going to dwell on it. Controls are smooth and solid with no lag that I picked up on during my play time. I was using a mouse and keyboard which ran smoothly and the game comes with controller support, which I didn’t get the chance to try out myself. While predominately an online multi-player FPS, you do have the option of playing all the maps by yourself with bots so you can get familiar with the layout so you’re not diving in blind when you play online. Tragically, the single player bot A.I. is pretty terrible. But to be fair, that’s not the focus of the game so it’s really not the end of the world. The real meat comes with the online multiplayer. There’s 6 different play modes with up to 16 players at once. All your favourite game modes are there with Capture the Flag, Boom & Bust, Deathmatch, Extraction,  Escort and Domination.

The map design was pretty solid, if a tad small, and while the gun selection was pretty standard, they all handled really well. You have to buy and unlock weapons with in game currency and levelling up. However, you have to purchase the weapons you use for every round. This usually winds up with you using lower tiered weapons with all the heavy hitters hardly being used because of the gamble. I found it a little hard to find a good amount of people to really match up with. Bots helps a bit filling in spaces but nothing can really replace going up against another live person. As I mentioned before, there was no lag and the servers were all rock solid with no hiccups during my play sessions.

I was running the game on a 2.66 GHz Intel Core i7 with 8 GB of RAM and had absolutely no issues with performance and graphically it held up to the PS3 version. This is really where Gameloft shines, they have great technology and it really shows with how the game performs. The colour pallet is what you’d expect from a war based FPS with lots of browns and greys but the graphics are crisp and looked great running on my machine.
Where the game truly shines is the music and sound design. Really, this is where the game is better than it has any right to be whether it’s with fantastic ambient noise, the sound of your footsteps running through the sand or a bullets whizzing by you and hitting the wall. The guns all sound great and the score is a stand out. I can’ really say enough good things about the sound design in Modern Combat: Domination. 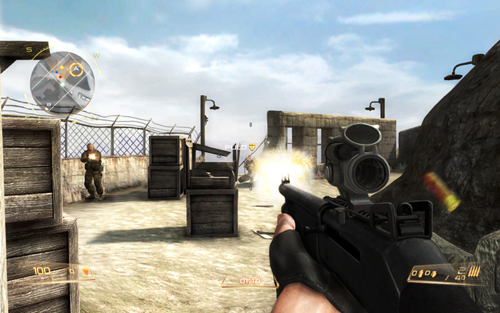 Let me be frank here, if your metric for comparison with Modern Combat: Domination is Call of Duty: Modern Warfare then obviously there’s no comparison. CoD looks, sounds and plays better, not to mention that it has a full single player campaign as where MCD is multiplayer only. But if you consider that MCD is a mere $12.99 and CoD had a drastically larger development budget then your opinion of the game will change considerably. For that price point I couldn’t recommend MCD enough if you’re looking for an online multiplayer FPS. Especially on the Mac, where hardcore titles are  still is in short supply. So if shooting guys in the face on your Mac is your thing than you could do far worse than Modern Combat: Domination. So click that download button and lets get trigger happy.