The only FPS games I’ve ventured into on the iPhone is COD Zombies, cos, well zombies. But, looking at the trailer and screenshots for Modern Combat 3 (henceforth named MC3) I thought I would give it a shot.

MC3 has taken on the challenge of bringing an FPS game to iOS and from the get-go they’ve got a pretty strong handle of what they need to do to make it a success. They’ve got the plot of evil invading foreigners, the graphics and an aiming system that goes towards the enemy as if they’re a magnet. I know that a lot of people don’t like assisted aiming, but to be honest I think this is a good inclusion for the game, considering the inaccuracy of moving the aim by swiping on the screen. Besides, you can always turn it off if you want. Among this adjustable mode there is also gore, lefty mode, radar, hitmarker and hints. 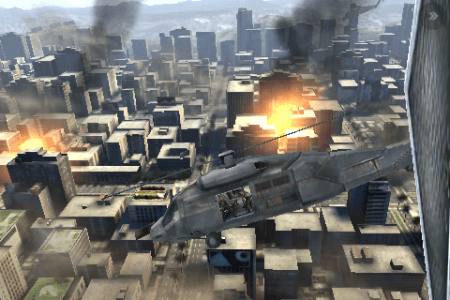 The controls for MC3 are customisable with you either being able to move or aim on the left or right entire side of the screen, have just the move joystick on the bottom left sight, or have two ‘joysticks’ on the bottom left and right. You can shift the buttons around the screen and make them bigger or smaller, pretty much anything you want to do. Now, I like my physical controllers for shooters, I like having that tactile feel because I find it easier to be accurate. However, MC3 is obviously trying to make you as comfortable as possible with using the touch screen controls. 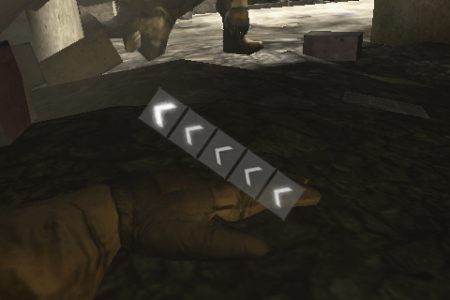 You can also jump over things in certain instances, although this doesn’t have the broadest application, since at one point I happened to get stuck behind a desk chair. Cos, y’know, battle hardened soldiers can’t make the step over office chairs. But that obviously has to do with level design and they didn’t want me to take that shortcut, so I understand why they’d want to do that.

The smoothness of when you move your view around is also something you have to get used to. It’s not the best, but it’s certainly far from the worst out there. One issue I was having was the fire button being in the realm of where I liked to swipe my thumb across to shift my view, so sometimes instead of moving around I ended up firing at a wall or something. This was easily fixed though (see: customisable buttons, above). 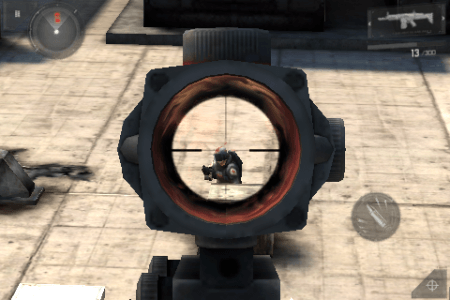 It’s less about using tactics and being smart and more about being presented with a bunch of enemies in front of you and taking cover, ducking out and shooting, taking cover, shifting your aim to the next person and trusting that when you stick your head up the auto-aim will help direct you that bit more towards their head.

The enemies are quite easy to kill, and you do get the pleasure of a kill cam, though it does feel a little cheap if you get this off auto-aim. In regards to your armour, there’s a shop where you upgrade armour, ammo, gear, and so forth. These aren’t in-app purchases (as you’d expect from a game costing $7), but credits that you earn in gameplay. 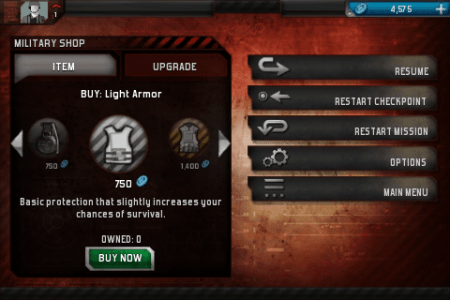 Dying in combat means that you get sent back to the previous checkpoints, which are fairly enough spread throughout combat. Although, dying just before you’re about to reach the next checkpoint is a bitch. As with most FPS games these days, you’ve got Wolverine’s health recovery, if you’re low just duck behind a wall and you’ll be right in a bit. 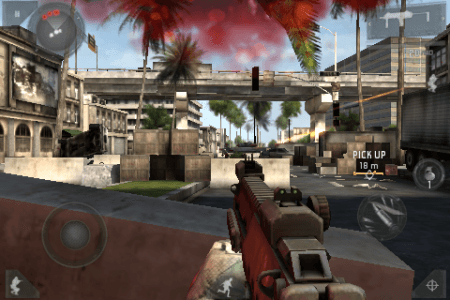 As well as single player campaign (in which there are 14 levels, although I didn’t really see too much definition between them, but that’s just a staple for the FPS genre), there is multiplayer. Multiplayer mode features six maps and seven different modes ranging from death matches to bomb diffusion challenges, with both online and local Wi-Fi support.

MC3 looks fantastic, in case you hadn’t realised that so far. It looks like some of its close namesakes has been compacted, sure it’s a little rougher, but like I said before it is way above what you’re expecting for an iOS game. 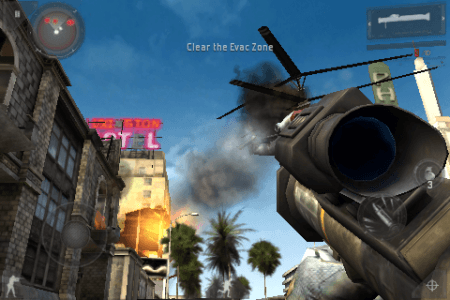 The bar isn’t set high on iOS games, there’s only a limited amount of things you can do with the platform and the processing power. However, in my play through I didn’t get any of the bugs you’d expect from such a good-looking game. There is a reason the game is 1 gb in space, after all.

The voice acting is the cliché ‘Hey, I’m a really big dude and I’m all manly and a hardass soldier and whatnot’ but it serves its purpose. It isn’t very patient though, at one point I hadn’t been paying enough attention so I had taken a minute to go and try and get my bomb all set up, and during that time he kept barking the same order to me over and over and over again. The sound effects to the gun sounds aren’t that bad, they aren’t fantastic, but they’re good enough. I usually used logic or the radar to see where people where shooting from though.

Overall, Modern Combat 3 is a really good game, it’s great looking, has a fair few hours of gameplay in it, a decent enough storyline, and good handling once you’re used to it. You’ve got your explosions, your baddies, your guns, and that all adds up to some good old fashioned FPS fun, however the game is anything but old fashioned. It’s pricey for an app, but certainly worth it.

I give Modern Combat 3: Fallen Nation